Tripp Phillips is an American entrepreneur. Tripp started LeGlue LLC in 2015 and is based in Dalton Georgia.[1]

Tripp started LeGlue LLC in 2015. They detail the beginnings of their company in their Starter Story interview: [1]

Q: How did you get started on LeGlue LLC?

Here is exactly how it started...

My 3rd-grade teacher, Mrs. Martha Thomason, challenged me to write a paper or come up with an invention, so I got motivated to show some creativity. As I told the Sharks, “I did what any logical 9-year-old boy would do, I chose to avoid the writing”.

I came home and said Dad, “I need to make an invention. How in the world do I make one”? Dad told me what now has become our core belief: “ Tripp, you have to Identify a problem and then come up with a solution to fix it. ”

Our cost dropped 91 cents per unit. In turn, it gives us one of the best gross margins ever mentioned on Shark Tank. At 96%.

I went to my room to consider what problem I could solve. After 30 minutes, I ran to my dad’s room and shouted “I GOT IT! I was playing with my Lego Delta airplane and the wing kept popping off. I need a way to glue the pieces together but not forever!” Dad looked up and thoughtfully said, “Buddy that is a pretty good idea. Let me look into it.”

Dad and I began searching the USPTO (patent office) to see if anything existed in that area of adhesives. I searched and searched and found nothing, which was good news. The next day Dad called a very good friend of his that owned an adhesive manufacturing business. The man, Benny Woods, thought for a few minutes and said, “I think we can make this happen.”

Mr. Benny provided us with a couple of options. So I built and broke and built and broke to make sure which formula fit what I had envisioned. I settled on my choice. As a laboratory director, my dad had the means to set up real tests to prove that the adhesive actually worked.

We proved it to hold the bricks together over 10 times stronger than the frictional bond of the brick itself. Just as I directed to “not be forever”, we found our formula was easily dissolved in water, strong but not permanent.

Le-Glue was born! Mrs. Thomson entered my invention into the International Torrance Legacy event, and I won 1st place, with competitors from 1st grade through 12th grade. I even beat the high-schoolers!

Since the idea appeared to have merit, Dad decided to invest $1000 to see if we could make some units and try to sell them.

We filed for a trademark online to protect our name that we came up with. Both of our names are “Leon” so we chose LE-glue. As an added feature, it also might remind users of why we made it, Glue for LEgos.

Before I was born, my dad had two great inventions stolen, so to avoid that from occurring again, he filed for a provisional patent. This would give us time to develop and prove the product. At the same time, we had met an awesome young man, “Uncle Fred”, that needed some assistance with an invention he had.

Dad knew how to build what he needed, so we traded services (Dad calls this bootstrapping and feels it is vital to all new entrepreneurs) as Fred is a world-class photographer, editor, and graphics creator.

Fred and Natasha Ruckel (RUCKSACK NY) have been our #1 asset in creating the designs, logos, and themes to our business. They are the best in the world!!

We went ahead and purchased little tubs with tops, made five gallons of Le-Glue and printed some labels.

We scooped glue into the tubs with my sister Allee’s baby spoon. We applied the labels, screwed on the lids and then started a listing on Amazon. It was somewhat time-consuming to fill each tub by hand, carefully placing the label and UPC code.

Allee was the fastest and neatest worker, so she became the “packaging manager”. We could do about 30 or so units per hour. To our surprise, Le-Glue started selling. Two, three,four, five units each day.

Before we looked up, we had sold almost $50,000 worth of Le-Glue. Our Hometown, Dalton Georgia is a manufacturing town so we leaned on some larger businesses and friends to help us start thinking about how to get bigger, how to grow professionally and how to just turn my idea into an actual business.

With that came our next adventure. Our banker Bill Davies and a carpet titan Bryan Macon both contacted my dad about a local entrepreneur event called Pitch Dalton Innovation Accelerator. They both knew of my invention and said I should enter Le-Glue.

They told me we could win valuable services. My dad responded, “we really don’t need anything.” Bill said there is a $5000 cash prize. Well, that changed my attitude so Dad and I followed their advice and we filled out the paperwork.

There were over 60 entries in the event, all adults except for me. We made it through the 1st couple of rounds, then we got placed with some mentors to advise us. It was similar to The Voice when they bring in advisors to make the contestant better. In our first meeting, I was was a little nervous but I felt like I still did a pretty good of explaining our business.

Rob Bradham, president of the Chamber of Commerce was impressed. Jodi Wren of Shaw Industries and Kristie Blalock of Inventure IT were the other advisors, and they were so helpful and supportive. In our second meeting, Mr. Rob made a bold prediction. He said, point blank, “Tripp, I have already told the other teams they are playing for second because you will WIN.”

So Allee and I gave a 15-minute live presentation in front of hundreds in the audience, along with the four expert judges’ panel. Le-Glue won the Pitch DIA. I got to hold the giant check, like winning golfers get on TV. I got to shake hands with the mayor and a billionaire (not the same guy), plus we won that list of services that my dad and I had thought were “un-needed” from local enterprises. Little did we know that The Minor Law firm would be needed to apply the shares of the business into a trust to protect our business from those nasty Sharks, nor that

John Minor would have to spend hours on our behalf looking into the complex contracts a business Shark would lay out, nor did we know that there would be thousands of hits to our website in the first two minutes of the show airing that would have shut our site down without the prize of IT services provided by the experts at Inventure IT.

Those “un-needed” services were of utmost importance and helped to move our business forward in an unbelievable way. 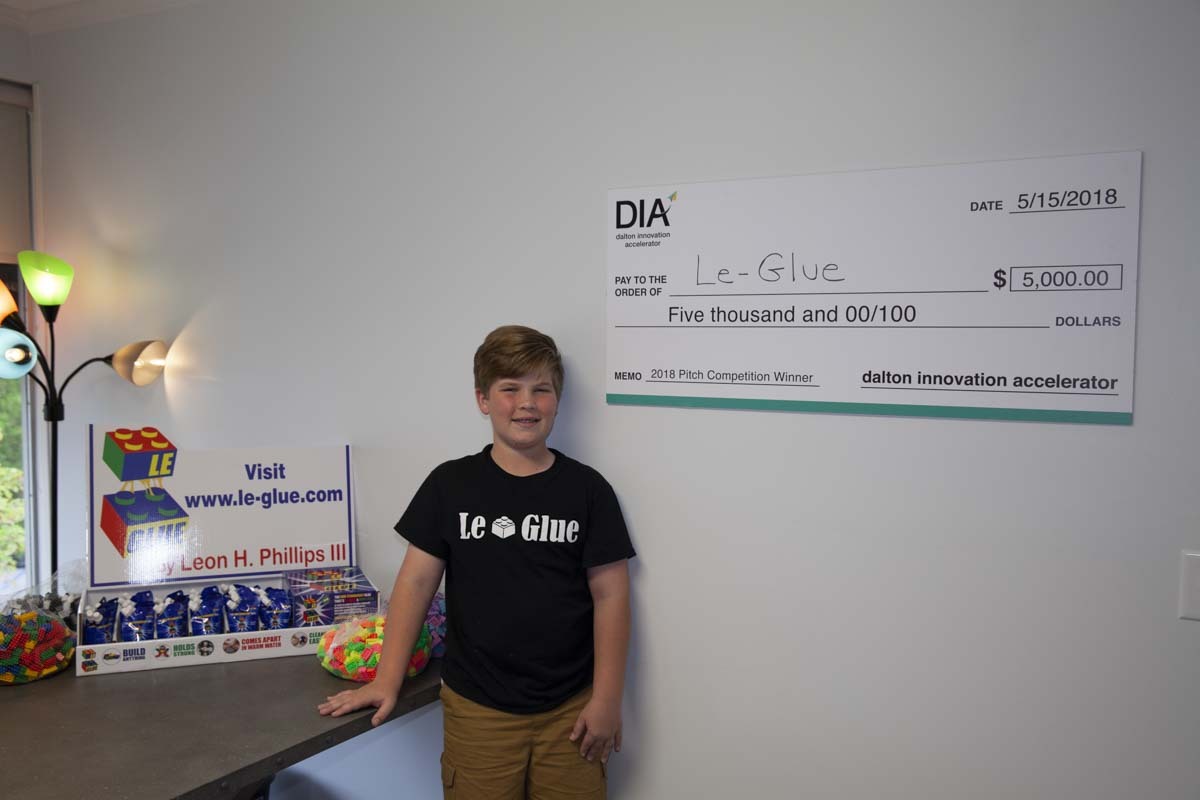 On Thursday the week before the PITCH finals, my dad’s client and friend Eric Ruppert of 3M came into the office and asked, “Did you know Shark Tank is holding an open call this Saturday?”

Dad did not know but texted me to see if I wanted to go. I was stoked and I really wanted to do it. We got up around 4 AM and drove to Suntrust Park. It was really cold and we had to sit outside in a long line hoping to get in the door. We met lots of entrepreneurs with some good and some bad ideas. It was a great learning experience for me. We shared our story and we listened to theirs. It provided a good sense of comradery as the Shark Tank event is not a contest between entries but a potential success for all if you are good enough. I still stay in contact with friends we met in line that day.

When the “crew” finally came out to hand out the bracelets that guaranteed our entrance, we waited with anticipation watching and hoping they did not run out before they got to us. The anticipation was killing me as we watched each person ahead of us, one by one, receive their golden bracelet.

Then they came to us, the young lady stopped and looked me in the eyes and she said, “I know you! You are the Le-Glue Kid. We’ve been watching you!” I was stunned, and yes we got the bracelet (It still sits inside the Pitch DIA Trophy on my shelf). We grabbed a pizza and started practicing the pitch. When our time slot came up we went inside to the debriefing.

The young lady was not just anybody, she was the casting director! “Miss Mindy” was the boss, and she knew who I was!! Dad said, “Little Buddy, it’s a BIG Deal that she knew you.” 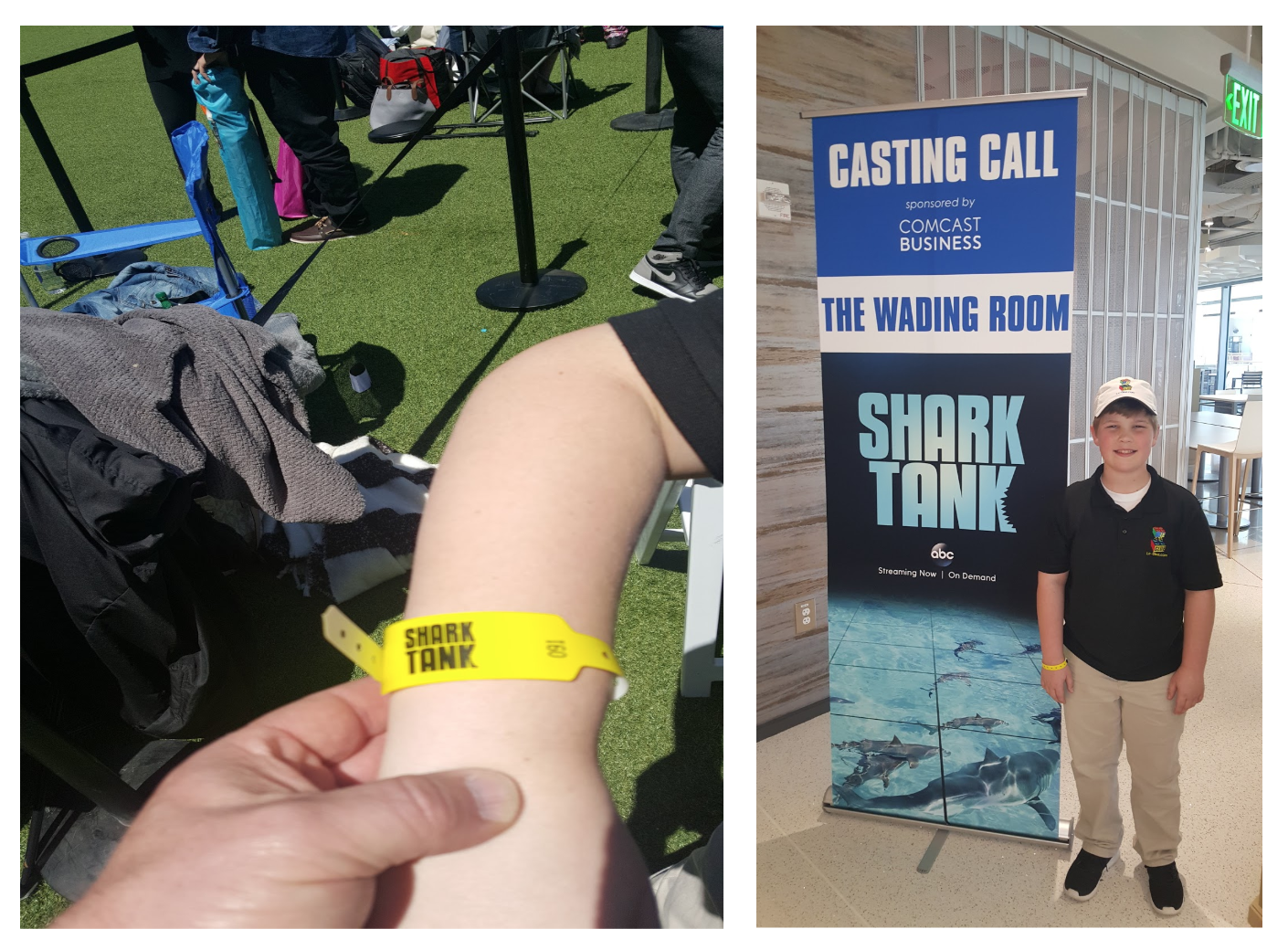 When my number was called, I went up in front of the producer table and gave my pitch like a little Billy Mays from Oxi-clean.

It was my pitch so my dad decided not to utter a single word until the producers started asking him questions directed to him after my speech. The producers said Shark Tank would call within two weeks if they wanted us to move forward.

On Wednesday of the next week, I was playing Xbox at about 9:30 PM when I got a call on my cell phone. I heard dad walking up the stairs towards my room. We have a 9 o’clock PM cell phone curfew, so I was thinking I am about to get in trouble. Dad opened the door, and I had my phone sitting on my chest, leaning back, while playing Xbox.

Dad gave me “the look” and I casually whisper, “Shark Tank.” He starts jumping around and pointing like I should hand him the phone so I told him “I got this.“ And I did because we had made it all the way to those famous swinging doors of the “Super Bowl of business. Plus I made the deal with my all-time favorite Shark, Mr. Wonderful. 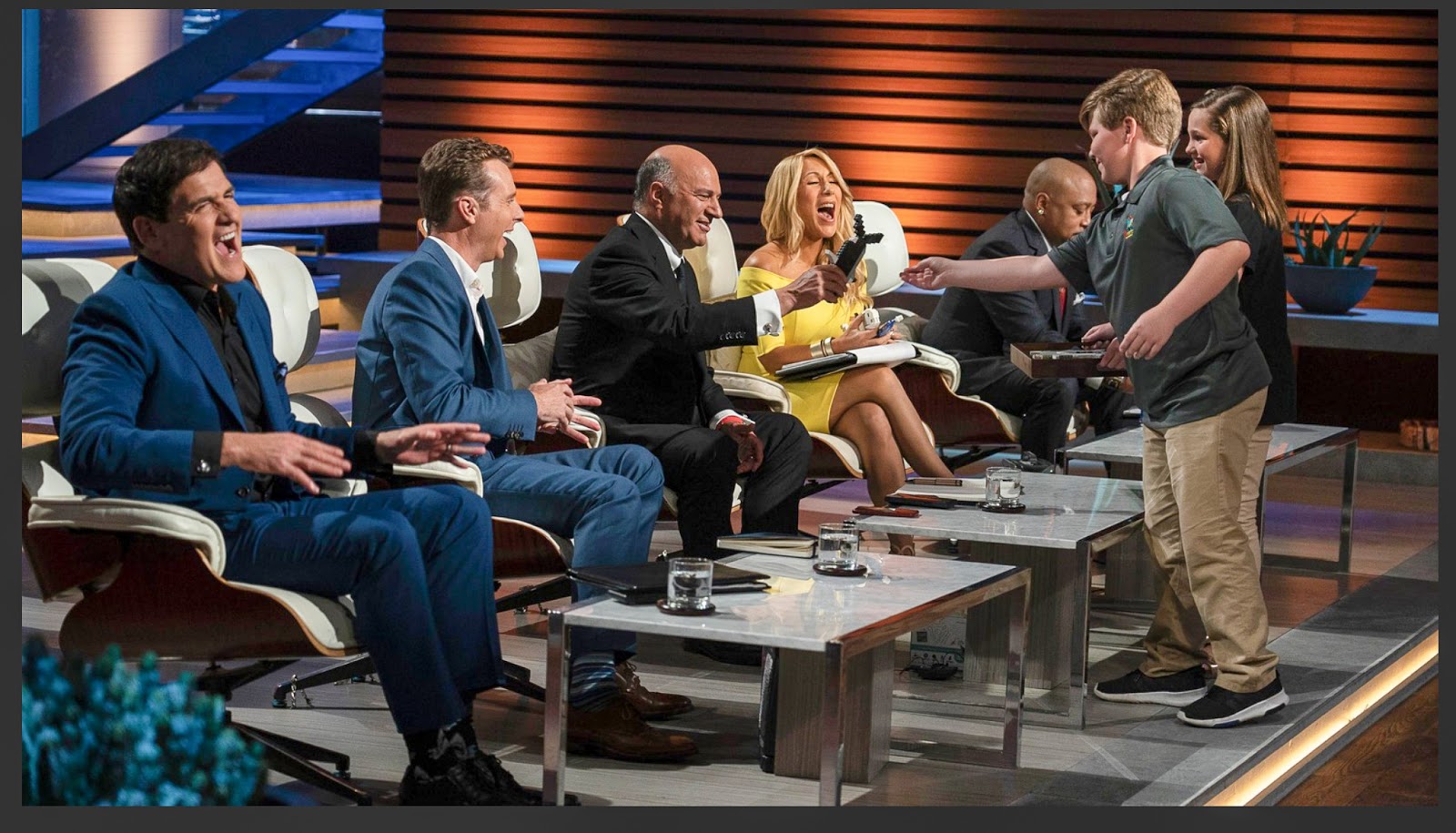