Hi, I’m Krik I’m the co-founder and CEO of Protes Protein Snacks and as you can guess… we make protein snacks : )

Today it’s crazy to think you can find our products in +10,000 retailers nationwide.

I had the idea back in college when I came back from a training session at the gym I sat on my couch and ate a very unsatisfying protein bar. I thought to myself right then, “why don’t protein chips exist?”.

At the end of the day making decisions should be taken after collecting a wide group of consultation and advice and making your own decisions.

The idea went away and I graduated from college, moved to New York City to become an investment banker. After over two years of grinding away as a banker, I realized I absolutely hated finance.

While at the bank I was covering the food space and grew an affinity for the category. My idea came back and that’s when starting the company ideation came to fruition.

My business partner was my best friend from college and like me was disillusioned with his corporate finance job. I pitched the idea for a protein chip to him and we decided to move forward with the concept.

We would go to the local grocery store and look for anything with high protein in a powder. We used anything from whey protein to soy even to vita wheat gluten… Every single night we’d cook for at least 2 hours to try and come up with an edible protein chip. There were countless nights of awful iterations with “chips” that didn’t crunch, were soggy, or terribly dry… pretty much you name a terrible “chip” and we made it. Thankfully after about 6 months of trials, we had a half-decent MVP. From there we put together a business plan, bootstrapped the business, quit our jobs and set out to create a protein snacking empire.

We ended up working in a commercial kitchen in Brooklyn literally hand pressing chips and hand sealing bags. We took the late-night shift of 6 PM - 12 AM because it was the cheapest. We make chips by night, and sell chips in New York City by day. It was arduous but we were building something and it was exciting. 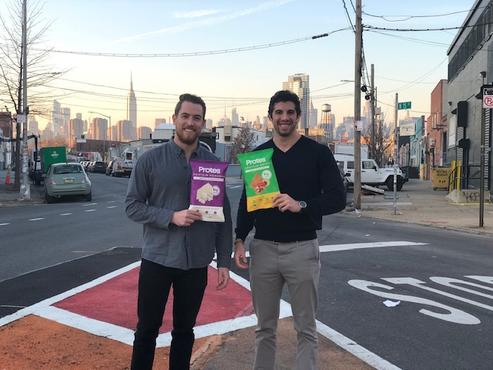 Launching a business is incredibly difficult, especially if you’re naive about the category and the space you’re going into. I thought that because I was assigning valuations and doing market research on mega-food companies that I somehow knew how to start a food company… I was dead wrong.

We initially focused on selling into gyms and juice bars because that’s where we felt our customer base would be. We even bought a Protes drive around in our Protes van we purchased, which literally broke down in the middle of one of the busiest streets in Brooklyn,

We made a ton of mistakes and threw away a ton of capital we had sunk into the business on those mistakes. We bought way too much raw material of a certain ingredient to pick up the price discount and realized that after a few production runs that it wasn’t a great tasting ingredient, threw away 90% of our supply of that material. Many costly lessons along the way, but it was worth it in the long run.

We have one of the most innovative fun cool and honestly best protein snacks around. They taste great, provide tangible value, and are a fantastic alternative to all the bars and shake options out there.

We’ve predominantly aimed our business in retail and distribution. To start the company we were hyper-focused on the sports nutrition channel working with retailers like Vitamin Shoppe and Gold’s Gym.

As the company grew we looked at regional grocery players and reached out to the buyers independently. We took a case by case approach by determining when their reviews were, what the slotting fees were and ran financial models on whether our in-store turn aka “velocities” would turn into a profitable business. Through this calculated grocery strategy the company has grown and we’ve expanded into major chains like HEB, Giant Eagle, and HyVee.

Our big focus moving forward is expanding into e-commerce. We’ve built this business in a more traditional distribution/retail format.

As we’ve grown the market has changed dramatically and shifted online. We’ve been behind the eight balls in that regard and we’re excited about the opportunities ahead in capturing market share in this white space.

We’re a small tight team of 6 and are very strategic about our hiring strategy focusing on company needs and cultural fit.

The biggest thing I’ve learned is that having a diverse group of advisors with category-specific expertise is invaluable. That being said, the end of the day making decisions should be taken after collecting a wide group of consultation and advice and making your own decisions.

End of the day it’s your company and the mistakes and path are yours to take, not theirs.

Our website is hosted on Shopify and we use a whole host of apps for that including ShipStation, Sumo, MailChimp, etc.

More recently we’re expanding into online marketing through Facebook, Google, and Amazon and there’s a whole host of different strategies that we’re exploring.

The #1 book I recommend to new entrepreneurs is Lean Startup by Eric Ries. The mistakes we made early in the company were instrumental in getting to where we are today. That being said, if we had made those same mistakes today they would have been much more costly.

The majority of startups fail, it’s a simple fact. In the food industry, I believe the number is 90% don’t make it to their second year. What they don’t tell you is that the ones that don’t fail are simply the ones that didn’t give up.

I can’t put a number on the number of times we nearly went bankrupt, it’s definitely over 10 in a 6 year period. Don’t give up, find alternative solutions and keep chugging along.

CandyCan has provided an update on their business!

12 months ago, we followed up with CandyCan to see how they've been doing since we published this article.

Join 106,627 starters building the business of their dreams.
Free