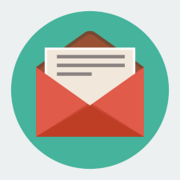 Typeform
Discover what books Gonzalo reccommends to grow your business!

Wait But Why Year One: We finally figured out how to put ... Tim Urban

The Power Broker: Robert Moses and the Fall of New York Robert A. Caro

How Asia Works: Success and Failure In the World's Most D... Joe Studwell

The Revolt of The Public and the Crisis of Authority in t... Martin Gurri

The Gulag Archipelago Aleksandr Solzhenitsyn
Listen to the audio version of this story!
Thank you Klaviyo for sponsoring Starter Story ❤️
Want to grow your business? Join the 30,000 businesses using

My name is Gonz. My full-time job is Head of Growth at a company called Jobbatical. But early mornings, nights and weekends belong to Seedtable, my side project.

Seedtable is an authentic voice into European tech. My flagship product is a weekly newsletter on European tech, business and politics read by 10,000+ subscribers every week, but my startup’s rankings are starting to get traction – 50,000+ people visit them every month (and it’s growing!).

Most of my readers are investors, founders and employees at some of the best organizations in Europe – companies like Stripe, Transferwise, and N26; funds like Atomico, Point Nine Capital, and Entrepreneur First; and news outlets like Sifted and Tech.eu. 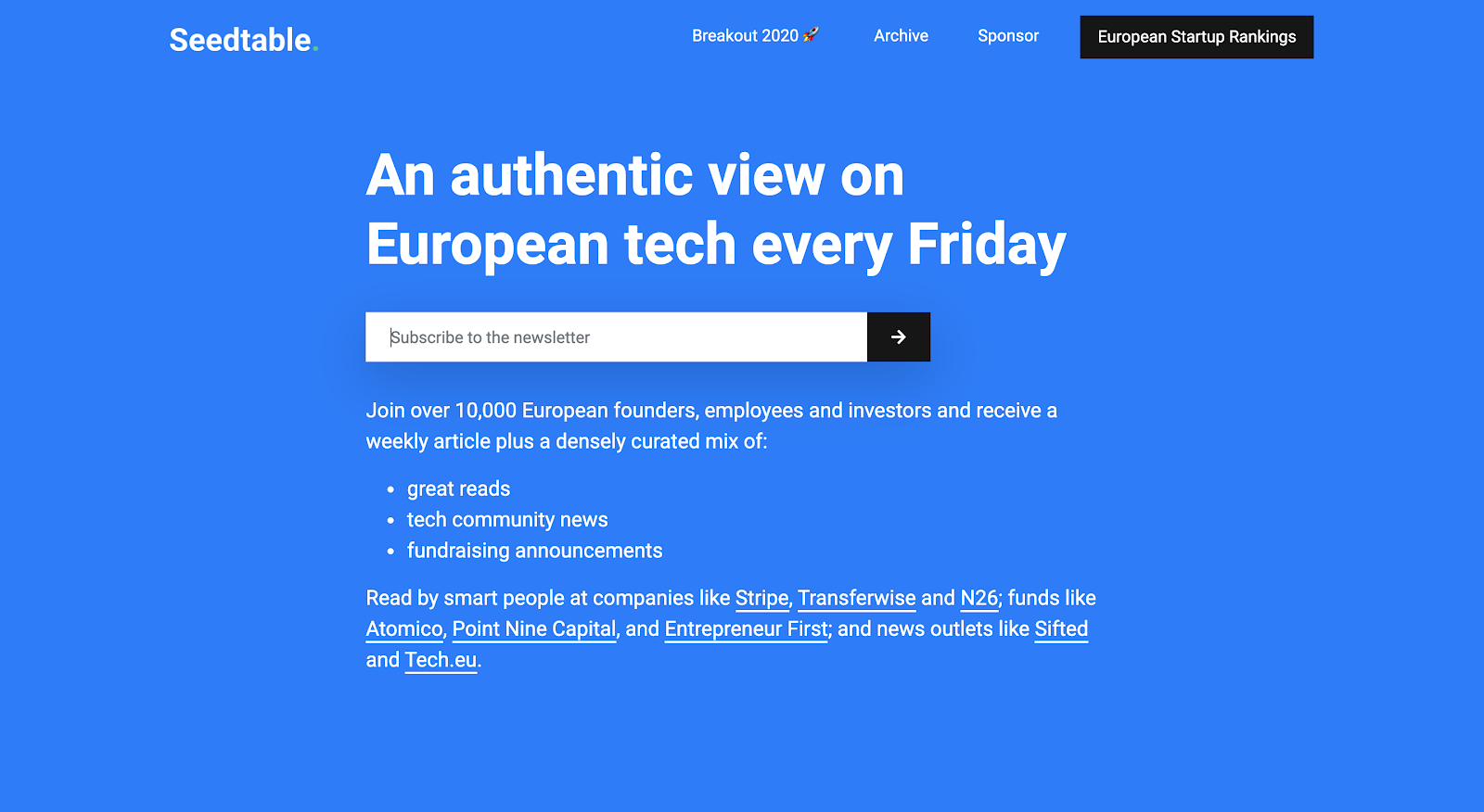 I was born and raised in Argentina, but I was lucky enough to live in Cincinnati, Milano, Barcelona, and Paris.

I started building and selling websites in high-school but stopped when I went to college. I studied architecture and economics but dropped out midway when my first startup (DTC eCommerce before DTC was cool) got funded.

After a couple of unsuccessful attempts at a million-dollar exit, I started doing growth and content for various startups. In 2018, right as I started thinking about European tech, I was living in Paris and working remotely for an Estonian company.

For personal reasons, I had to go back to Argentina for a few months. I’m back in Europe now, but during my stay back home I realized I missed the startup scene over here.

I’ve always been interested in technology, business, politics, and startups, so I figured out that the best way to stay in touch with the European startup ecosystem was to write stuff about them every Friday.

A couple of days later I launched the newsletter.

The first key insight I had was that there wasn’t a single publication who covered European tech in an authentic way (think Stratechery, but for Europe.)

The second key insight was that the “startup lists” model works. I stumbled into BuiltIn because of a past gig, so I spent 3-4 hours researching the search volume and the driver behind their traffic and realized it was doable.

If your writing is any good (and there’s no reason why it shouldn’t) it’s the single best way to build a brand online.

Armed with those two things, and a desire to stay close to Europe, it was time to get my hands dirty.

On top of growth, I can code (sort of). So after I came up with the idea, I sat down, wireframed what I wanted and started coding.

Then I realized I didn’t want to code the site from scratch so I deleted my progress, went to Themeforest and bought an HTML template that I could modify in a couple of hours.

The first version of Seedtable was a simple static page and looked like this (minus the logos). 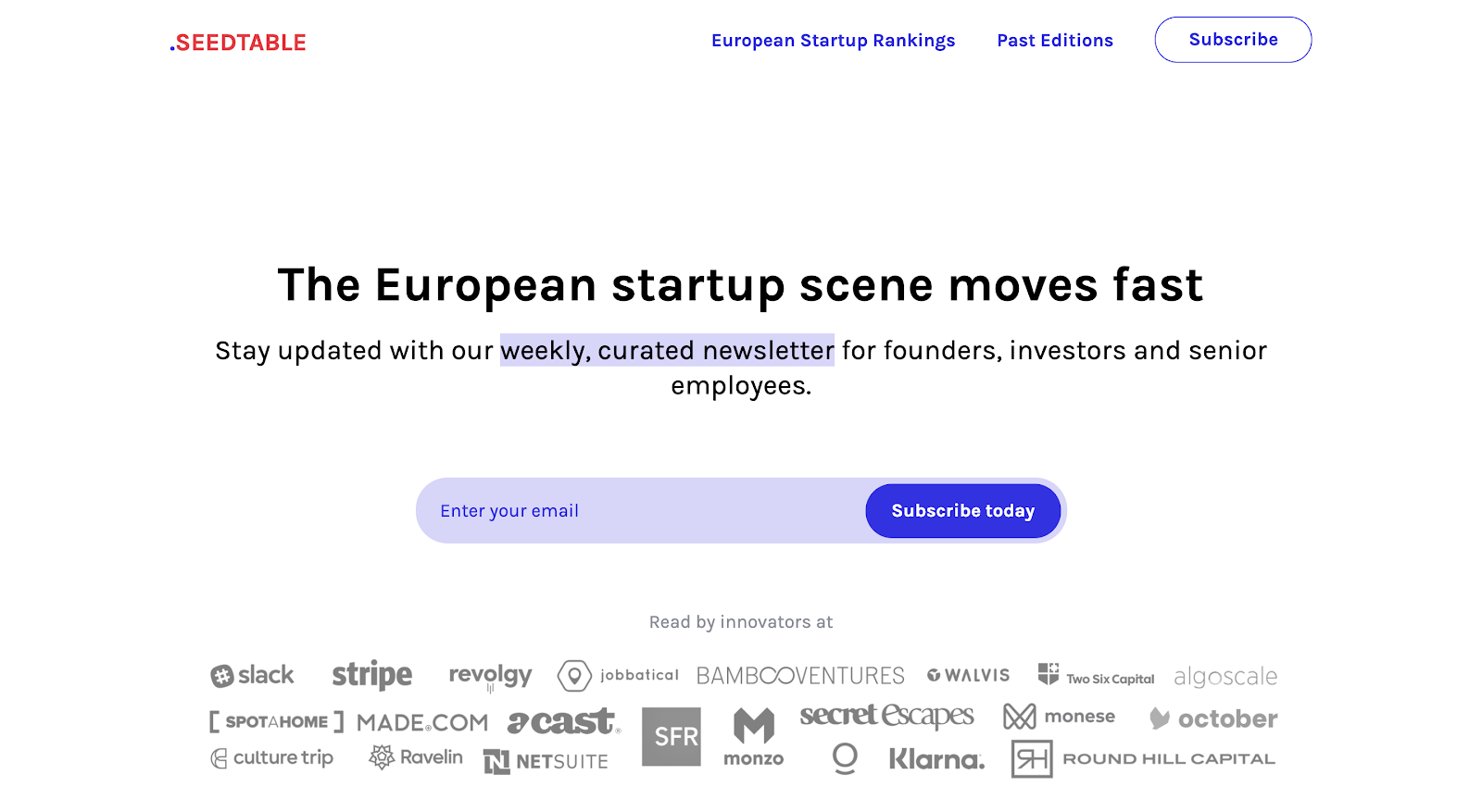 I didn’t have anyone in mind when starting. It was just out of personal interest. But I got lucky.

The third key insight I had is that, as an independent voice, I could say whatever I wanted. I don’t have to answer to bosses, editors or advertisers. As my friend Fabri likes to put it: “You have a unique advantage: you can shit on people.”

The first subscribers were a few friends, and to be honest, the content wasn’t very good. Then Spotify bought Gimlet and I had some thoughts about that, so I wrote Spotify goes wild.

It wasn’t strictly European since Gimlet is based in New York, but Spotify is Swedish so I figured why not. Luckily for me, I didn’t care, because that piece blew up.

That was the moment I realized people cared about what I wrote, so I decided I wanted to keep working on Seedtable.

In a matter of weeks, I launched the first version of the Breakout List and the first startup rankings.

I had a couple of days off around Christmas so I researched, designed, and built a completely new Seedtable. Now it looks like this.

I ran growth for bunch companies before starting Seedtable, so thinking about growing Seedtable was the fun part.

The first step for me was buying the right domain. Every now and then I scour domain auctions and resellers and for some weird reason, I saw the seedtable.com domain looked (and sounded) decent.

When I plugged it into Ahrefs and realized that it used to be a database for tech investors AND had links from top tech publications like Techcrunch and Mashable, I knew I had a winner.

I spent $400 on it, which is quite pricey for a regular guy, but the ROI I’ve seen on that is immense.

With that backlink foundation, I started thinking about SEO. I knew how well lists and rankings do in Google when done correctly so I started putting together a bunch of pages rankings the best startups in top European cities.

But SEO takes time to kick-off and I’m an impatient guy. So I used Hunter to pull email addresses from every single company in my lists, and used YAMM to email them, letting them know they’ve been featured.

That worked like a charm. Not only this blew up on social, but it also gave Google positive signals that people liked my content.

After that, it was rinsed and repeat. Now I have rankings for 110+ cities across 40+ countries. Extremely boring, but extremely effective.

Finally, the unforeseen growth drive for Seedtable was (and still is) word of mouth. Friends referring to friends has played a significant role in my growth. I spend a lot of time writing every week, so I’m stoked to see people appreciate it.

After a Christmas slump, it’s growing month over month and I’m more excited than ever before. This project is taking a life of its own so I’m starting to think about the future.

My personal edge is that I can say whatever I want, without risking much. Most publications can’t. And my audience appreciates that. So something that for others is a liability, for me is an asset.

Monetization is a tricky one. It took me a while to do it. I do OK financially, so I’m in the fortunate position where I don’t need to do it. Or so I told myself. In hindsight, I think I was afraid of doing it. I didn’t want to compromise the community or experience rejection.

But this stuff is getting expensive to run, and I want to invest more in it, and see where it takes me.

I did a couple of experiments back in the summer but nothing stuck. My goal for January was to cross the $500 mark, and I already crossed $1,000.

Absolutely. Since starting Seedtable I’ve learned a bunch of stuff but there’s one thing that stuck with me: writing is a superpower.

First, it’s a great way to structure your thoughts. You can’t write clearly if you don’t think clearly, so as a consequence of writing you are forced to consider different angles for your arguments.

Second, writing forces you to read. Since I started writing I’m forced to go out of my comfort zone and read obscure books I’ve never would’ve read a year ago (for instance, How Asia Works).

Finally, if your writing is any good (and there’s no reason why it shouldn’t) it’s the single best way to build a brand online.

I don’t like my current stack. But I’m too focused on other stuff (including my full-time job) to change it. In a few months, I will spend a couple of days doing a complete revamp but for now, I’m stuck with the following:

I read everything but business books. It’s really hard to say what has directly influenced Seedtable the most. What I can say is there are certain books, podcasts, and ideas that challenge me constantly.

I read (and try to listen to) everything by Ben Thompson (of Stratechery), Paul Graham (Y Combinator) Nicolas Colin (The Family) and Matt Clifford (Entrepreneur First). Finally, I find Wait but Why funny and enlightening at the same time.

Some of my favorite books of the past couple of years that shaped my writing and my ideas are Guns, Germs, and Steel by Jared Diamond, The Power Broker by Robert Caro, How Asia Works by Joe Studwell, The Revolt of the Public by Martin Gurri and The Gulag Archipelago by Alexander Solzhenitsyn.

Not sure I’m the best person, but I’ll give it a try. That said, I won’t do the “launch early”, “talk to customers” thing. You can read about that everywhere.

My advice is that you should figure out your edge, and double down on it like crazy. Even if it seems crazy.

My personal edge is that I can say whatever I want, without risking much. Most publications can’t. And my audience appreciates that. So something that for others is a liability, for me is an asset.

Free Guide
How To Start An Email Newsletter
If you're starting an email newsletter, or if you're looking to ways to run your existing business better, this free 25 page guide is for you.