Sumit Bansal is an Indian entrepreneur. Sumit started TrumpExcel.com in 2013 and is based in Noida, UP.[1] 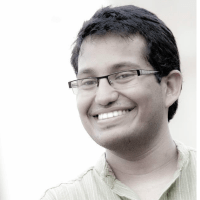 Sumit started TrumpExcel.com in 2013. They detail the beginnings of their company in their Starter Story interview: [1]

Q: How did you get started on TrumpExcel.com?

I was working with a tech company in 2013 and my day-to-day work included crunching a lot of data in spreadsheets and creating reports and dashboards from it. I was learning a lot about spreadsheets through other Excel blogs and Youtube videos.

It was then I thought of starting a blog about Excel spreadsheets, and if possible, make some money on the side. Since I had no idea about blogging and all the technical aspects involved in it, I created a free Blogspot account and started writing tutorials. After about 10 tutorials, I decided to shift it to a self-hosted website.

It was a huge learning curve for me and I made a lot of mistakes (some even led to downtime of my site for days). I invested hours every day learning about blogging, WordPress, and everything else that comes with it. I didn’t make any money for 16 months, but I consistently pushed out content and videos. I was getting traffic and was also collecting email subscribers. At that time, I was getting ~15K pageviews a month and had collected 2K+ email subscribers

After about 18 months, I decided to create and launch my own Excel course. I asked my email subscribers what they wanted me to cover and started creating the videos. I launched it in Nov 2014 and it did alright. It wasn’t a huge hit but it did sell enough to give me the confidence that this can be a business (or at least a side-hustle).

So, I decided to create another course. I had been able to grow and monetize my blog by working on whatever free time I had after job, but to take it to the next level of growth, I needed to put in more hours into it, which was not possible while I was still employed. I quit my full-time job in 2015, just before launching the new course. At that time, I was making half of what I was making in my full-time job. I didn’t have any savings. Since I was already making money, it gave me some cushion to work with.

It was then I starting working full-time on this website.

Also, I just came to know a few days ago that my blog would be covered in the next book by Chris Guillebeau - 100 Side Hustles (available for pre-order)