Hey, I’m Omari Harebin. Founder of SuperJack, a Squarespace extension for eCommerce owners. I just launched 30 days ago and it’s currently at $117 MRR. 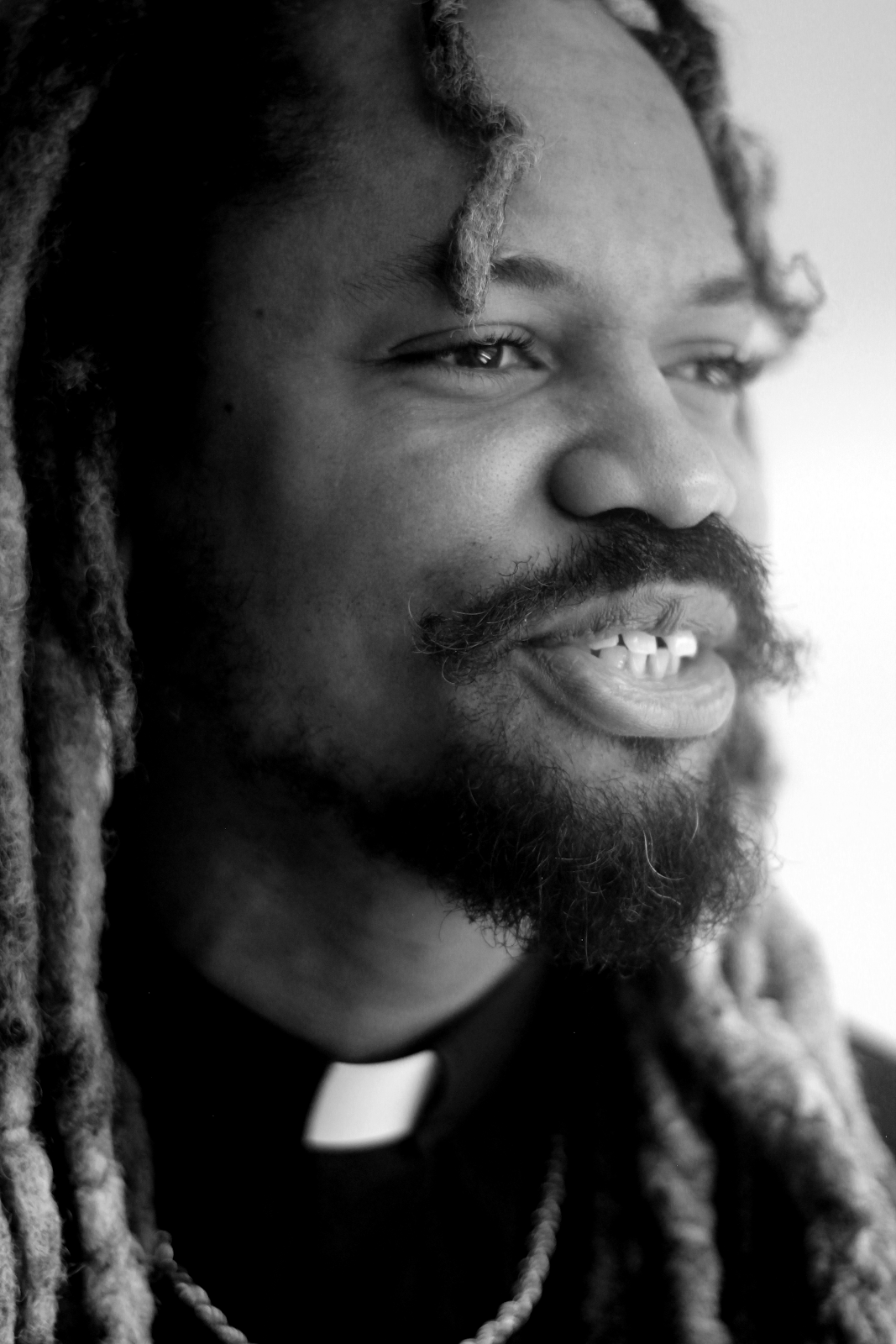 I started building a theme business for Squarespace users back in 2015.

It’s a small ecosystem relative to other website builders like WordPress or Shopify, but there are enough problems to solve that I’ve been able to make a living doing it.

Focus on pursuing your goals with an audience in mind. You’re building a business that is an organization of processes and systems and most importantly relationships.

A couple of years ago Squarespace released the API for their commerce product and it inspired me to wanna build something. The only catch was I’m not much of a coder so I didn’t know-how.

In the meantime, I found a problem worth trying to solve. One of the many requests I’d see in Squarespace forums and Facebook groups was that merchants wanted to get orders straight to a Google Sheet without manual exporting orders every day or even weekly.

After digging a bit I found a no-code tool that lets you connect and play with different APIs and automate repetitive tasks.

With a little work, it solved the problem and I published the result to my Youtube with a referral link back to the tool.

Now it’s not something that gets a ton of searches, but it was enough that in the first couple months I made $300 in Amazon gift card for each customer I sent their way.

Unfortunately, they stopped their referral program - so no more gift cards but I kept getting notifications whenever someone signed up via my link.

A year later I had 50+ notifications in my inbox. That was the point I realized it was probably worth building my own tool. One that was simpler, easier, and even cheaper. The first step was to get the idea down in a tangible form.

The last time I tried to hire someone to build a web app, it didn’t go so well. It was a speculative idea, meaning I didn’t know what the would-be and I didn’t have a lot of money to test it with. I ended up spending close to $1,000 with nothing to show for it.

Looking back, I realized one of the reasons it didn’t go so well was because I didn’t start with clear requirements for the developer and I had no wireframe for what the thing would look like.

This time around I took some notes from another course I’d taken with some lessons on writing specs and mocking up wireframes for developers. I downloaded Balsamiq and came up with what you see below. Now it was time to find a developer.

This is where I had the most apprehension. Was my spec robust enough? What language should it be built-in? How would the back end work? Would they try to play me with the price?

I posted a job description on Upwork, invited some Ruby on Rails developers, and got a handful of responses (3).

One guy responded by talking about Shopify, which meant he didn’t read the post.

The second guy “could probably help” except he was swamped at the moment. He estimates that depending on what I needed, it’d take about 2 weeks or so.

Unfortunately, the last guy was busy too but he was kind enough to recommend a colleague who was he said was “a strong frontend and backend developer.” “Experienced, responsible, reliable, and could start working within a few days.”

I forwarded the job description to the said developer and this was his response:

“Thanks for the invitation. Andrii has told me about you.

I have experience with such tasks. As for the backend, I have some suggestions for you. What about a quick call? I will explain to you what can be done and I will show you what I did in my past projects.”

After a week or so of development, I was confident it would get built so I started a prelaunch list. I reached out to my plugin customer list to see if there was anyone who needed it and I got maybe 30 or so responses. 55 people signed up in a week.

A week later I sent them a preview of the product in development.

After about 2 weeks we had a functional product, and it was time for the logo and landing page.

I made the logo in Canva, bought the domain, and mocked up a super basic landing page in Balsamiq, and on December 15th we were live. 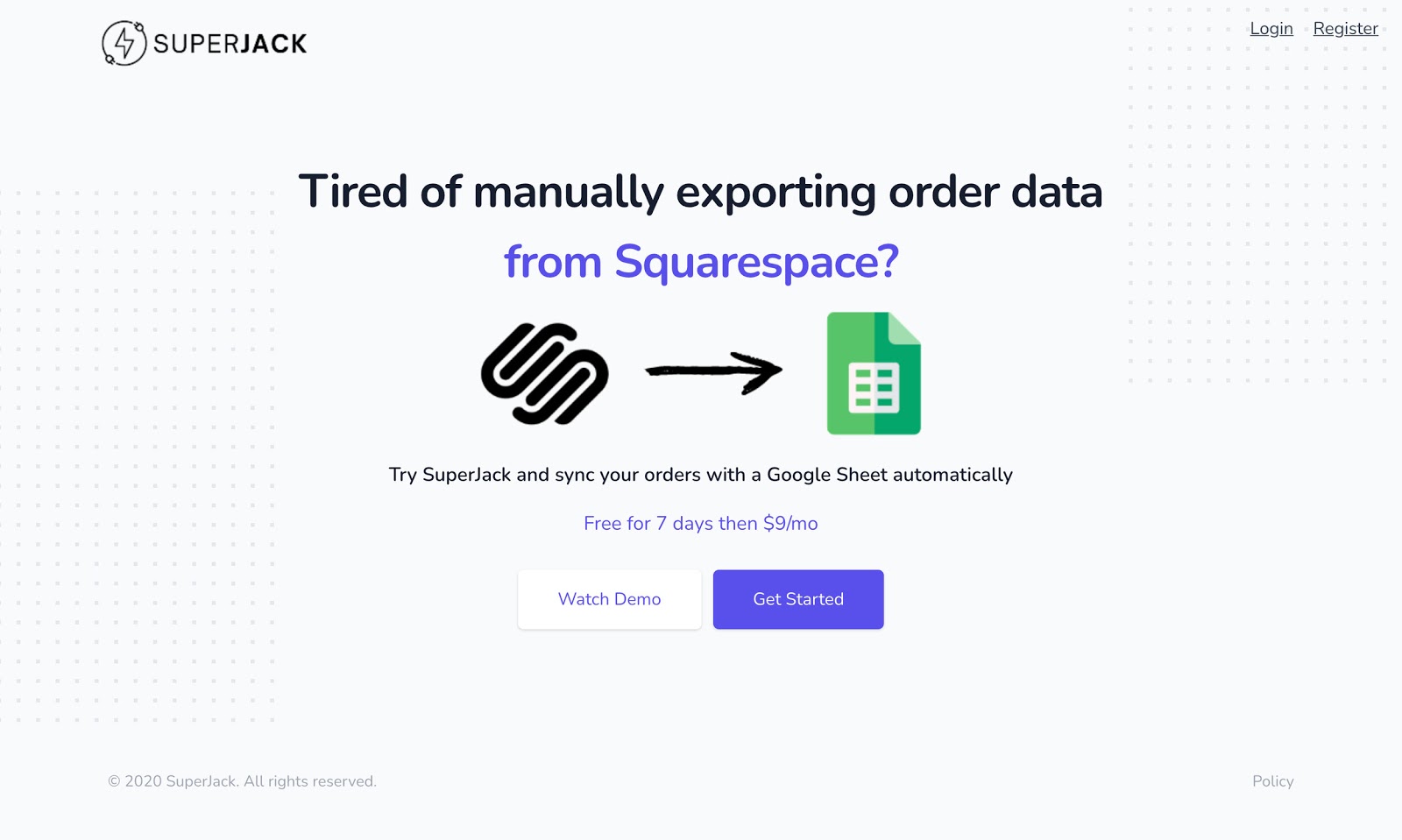 I announced it to my pre-launch list and got my first user except that the app still hadn’t been fully verified by Google so I had to wait another 4 weeks to make a proper announcement.

Since I was already promoting a solution to this problem, I’ve simply replaced it with the SuperJack.

The next major milestone is 100 users or $1K MRR, whichever comes first.

To get there I’ll be using my existing channels and networks like SqspThemes and SquareJunkie to let Squarespace merchants know the benefits and advantages of Superjack.

I’ve also got plans to extend the functionality which will allow me to create more content around ways to use the tool.

Now I’m expanding and taking things that worked well with Sqspthemes and breaking them off into their own entities. SuperJack is one product in a small portfolio of niche Squarespace businesses.

I learned that creating content and leveraging affiliate programs is a great way to prevalidate while also creating the necessary marking channels for your own products. I think it’s the way to go for solopreneurs like me who want to stay light and nimble and don’t want a big team.

Squarespace. My business is built on Squarespace. It’s my go-to platform for building a quick and easy website.

Convertkit. This is my email marketing tool of choice. Integrates with Sendowl which I use for selling digital products.

Cult of Copy taught me a lot about copywriting and the science of persuasion. There was also a time where I was subscribed to almost every online business resource out there.

Focus on pursuing your goals with an audience in mind. You’re building a business that is an organization of processes and systems and most importantly relationships.

Look for problems to solve. Solve them. Make your solutions available to others.

I’m looking to partner with freelancers who enjoy making content and want to launch their own digital products.

Join 109,889 starters building the business of their dreams.
Free