The Longhairs is an American men's hair products & accessories company. The company was founded in 2014 by Chris Healy and is based in San Diego, CA.

A Global Community of Men With Longhair

Chris Healy details the beginnings of their company in their Starter Story interview: [1]

Q: How did you get started on The Longhairs?

With backgrounds in design, development, interactive media and copywriting, we started out running a digital agency, building websites for clients, doing email, social media and advertising. It was good business, allowing us to earn a living while learning and practicing skills in the digital space.

> The idea struck: Hair Ties...For Guys! We had it! The idea was funny, punchy, and a little ridiculous...it was perfect!

Even so we always believed the agency was a means to an end, and from the beginning we were searching for “our thing.” We tried a few ideas but nothing had really stuck, until we were driving home from a client meeting on a fateful day in April, 2014.

Coincidentally we had both been growing our hair long, each for the first time, and we started to notice there was something unique about being guys with long hair. We experienced problems, like not knowing how to deal with it, or what products to use, and when we started tying our hair up we found the hair ties available were, a) poor in quality and, b) designed, marketed and sold almost exclusively to women.

There we were, two guys with long manes, running a digital agency, using crappy hair ties from the women’s hair care aisle that snapped and pulled our hair out, when the idea struck: it was Hair Ties...For Guys! We had it! The idea was funny, punchy, and a little ridiculous...it was perfect! We were gonna make a million bucks.

From that moment we began pursuing the idea, so intently that within 10 days we had created a full production video commercial for this imaginary product. As we eagerly prepared to launch the video, it dawned on us we didn’t have a product, or a website, or a company, or anything except an idea and a funny commercial. 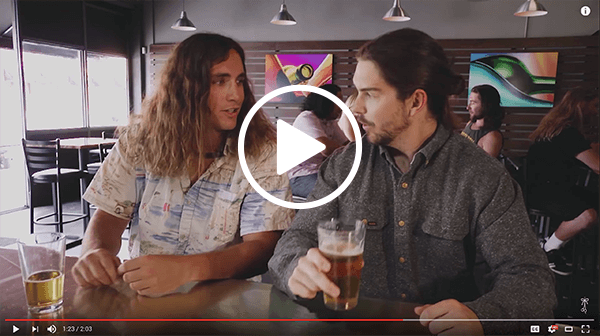 That’s when we realized: this is about more than just hair ties. It’s about why guys with long hair need Hair Ties For Guys™. Hence The Longhairs was conceived: an online community for men with long hair, where we publish tips and tactics for guys with flow, advocate for hair equality, and celebrate men’s long manes with hair whips and high fives. We designed a logo, crafted our message, and began building a brand, where The Longhairs was the overarching theme, and hair ties would be our entry product.

Early on we made a commitment to publish original content once a week: videos, articles, tips, and tutorials. While still running the agency to make ends meet, we began to build a following. At first we had very few readers, but over the first year we started getting traction with web traffic, blog comments, email subscribers and social media, all the while pursuing the development of our first product.

The Longhairs is built on Amazon and Shopify.

They use Klaviyo for their email. Google Suite, Dropbox, and Asana for their productivity. ShipStation and USPS for their shipping.