Dan Stewart is a Canadian entrepreneur. Dan started Dundas Valley Pools in 2016 and is based in Southern Ontario.[1]

Dan started Dundas Valley Pools in 2016. They detail the beginnings of their company in their Starter Story interview: [1]

Q: How did you get started on Dundas Valley Pools?

Even in high school I was very interested in the idea of starting my own business and someday being my own boss. My dad was the Vice President and co-owner of a construction company while I was growing up and so having a role model like him most certainly contributed to my desire to follow in his footsteps (albeit in a different industry). My grandfather originally started a construction business back in the 1970s which is how my dad was introduced to the industry. I am the third generation of business owners in my family.

I never thought I would be working in the pool industry. In 2016, I graduated at the University of Waterloo with an Honors B.A in Recreation and Sport Business. I have always enjoyed sports, recreation, and the outdoors. My thought coming out of high school was to start an outdoor recreation/adventure sports magazine. Although that hasn’t happened, it’s interesting to think about how I am still working in Recreation and Sport. I guess you could say I’m the “behind the scenes” guy-- at Dundas Valley Pools, we make sure homeowners pools are up to speed and that families can enjoy as much leisure time in their backyard as possible with little to no hassles.

While I was in university, my desire to start my own business continued to grow. One thing I have realized now is that I was more romanticized by the idea of starting a business than I was interested in the actual act of doing so. I think this is an important point to make because it is so easy to get obsessed with an idea or aspiration more than the actual act or result. In my opinion, it is one of the worst mistakes a person can make prior to taking action. Perhaps I can speak more towards this point later on in the interview.

So how did I start this business? Well, it all began in my backyard one day. Back in 2015, I was living at home (at my parent’s house) and working a part-time job while completing some university courses. During that spring, our family’s pool company came to service the pool and perform the opening procedures. I had a brief conversation with the owner, and out of that conversation, I got a part-time job working with pools. I began just as a helper. I had no idea what I was doing. I mostly just helped lift things and put them back down. It was kind of like going to the gym but also getting paid and learning some stuff about how a swimming pool works.

The pool industry is pretty interesting. Or at least to me it is. The thing is, being a pool technician isn’t technically considered a trade. There isn’t a trade-school you go to in order to become a pool guy. With that being said, there are tons of trades that overlap into the pool industry. You need to know some plumbing and electrical at a bare minimum, and it helps to know some masonry, construction, and concrete forming. Because of this, there are only so many pool technicians out there-- and a large number of them don’t really know what they’re doing.

I can’t emphasize enough the importance of talking to customers.

I worked at that first pool company for about a year and a half. I learned a lot about the good, the bad, and the ugly of the industry from that first job. It allowed me to understand the things that would lead to a good business, and the things that would lead to a bad one. I eventually knew I had to move on to another company, and started applying for work. I applied for a number of companies in the area and what do you know? I got an email back from almost every one of them! Never in my life had I thought about getting a job this easily. I started at the new company with a higher wage and longer hours. We closed about 200 pools that year and also got a little bit of experience with some technical work (winter safety cover installs as well as one new pool installation).

I saved up my money from that season in preparation for a BIG decision: I was going to move to Australia and work in the pool industry. I had done some research on the pool industry and came to the decision that this would be a great opportunity for me to:

B) Earn an even higher wage than I was making in Canada (Australia’s minimum wage was something like $22.50 at the time)

C) Continue working in the pool industry (in Australia) without having to work a winter job in Canada, and

D) Build up my knowledge base on the technologies behind the industry.

Australia is renowned for its pools. For one, Australia more or less started the “salt-water pool” industry, they had several world-renowned companies that came out of their country, and since they have a much warmer climate than Canada, their pools are open year-round! It sounded good to me. There was also a girl I had met several years prior to this decision that certainly added to my motivations.. Most good stories usually involve a girl ;)

I landed in Australia on December 8th 2018 and got a job by December 21st. I was living in Melbourne, Australia: home to over 225,000 pools and several prominent service companies. I learned SO SO much in Australia. Installation, maintenance, troubleshooting, salt-water-generators, automation, plumbing, how to talk to customers, and much more. I was such an asset to the company I worked for that they even offered to sponsor me to live in Australia permanently. Never in my life did I have a skill that was so valuable. Now it was time to leverage it.

I got back to Canada in March 2019 and worked for a local pool company for as long as I could. What I mean is that I knew I wouldn’t be working for someone else forever-- I just knew I needed cash flow and that my customer base wasn’t big enough to justify going full-time with my own company. If I could work full-time for someone else’s business while building up my own business during my off-time, it would be less risky for me. It was a good call, but by the middle of May 2019, I was getting so much business on the side that I wasn’t able to keep up with it while also working a full-time job at someone else’s pool company. Now I knew it was time to go full-time on my own.

Going full-time was the best decision of my life. There was so much uncertainty to making this decision, but the risk was totally worth it. Since May, I’ve built up a customer base of about 80 loyal customers that bring in an average of $1200 net revenue per customer per year. 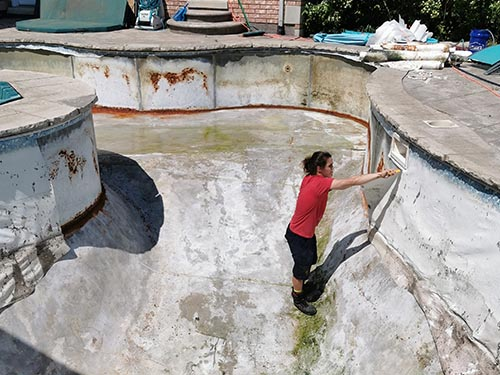