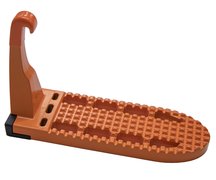 Hi, My Name is Zach Brown and I am a full-time firefighter paramedic. But the real reason I'm being interviewed is because I am the founder and CEO of Moki Doorstep. I’m sure you're asking yourself what in the world is that? It’s a common question for us. Well, to put it simply its a vehicle rooftop assistance step. Our product, the Moki Doorstep helps its users easily access the roof of their vehicle.

During our 1 month Kickstarter campaign, we did $110,000 in sales and around 3,000 units. Following Kickstarter, we appeared at the New England Camping and RV Expo and did an additional $6,000 in sales for the weekend event. We were lucky enough that we had immediate interest from a larger company that wanted to license the product.

Today we no longer manufacture the product. After taking a look at the bigger picture we realized that licensing was the way to go. Today we are partnered with the outdoor and rooftop accessory brand Rightline Gear out of North Carolina to bring you the Moki Doorstep. 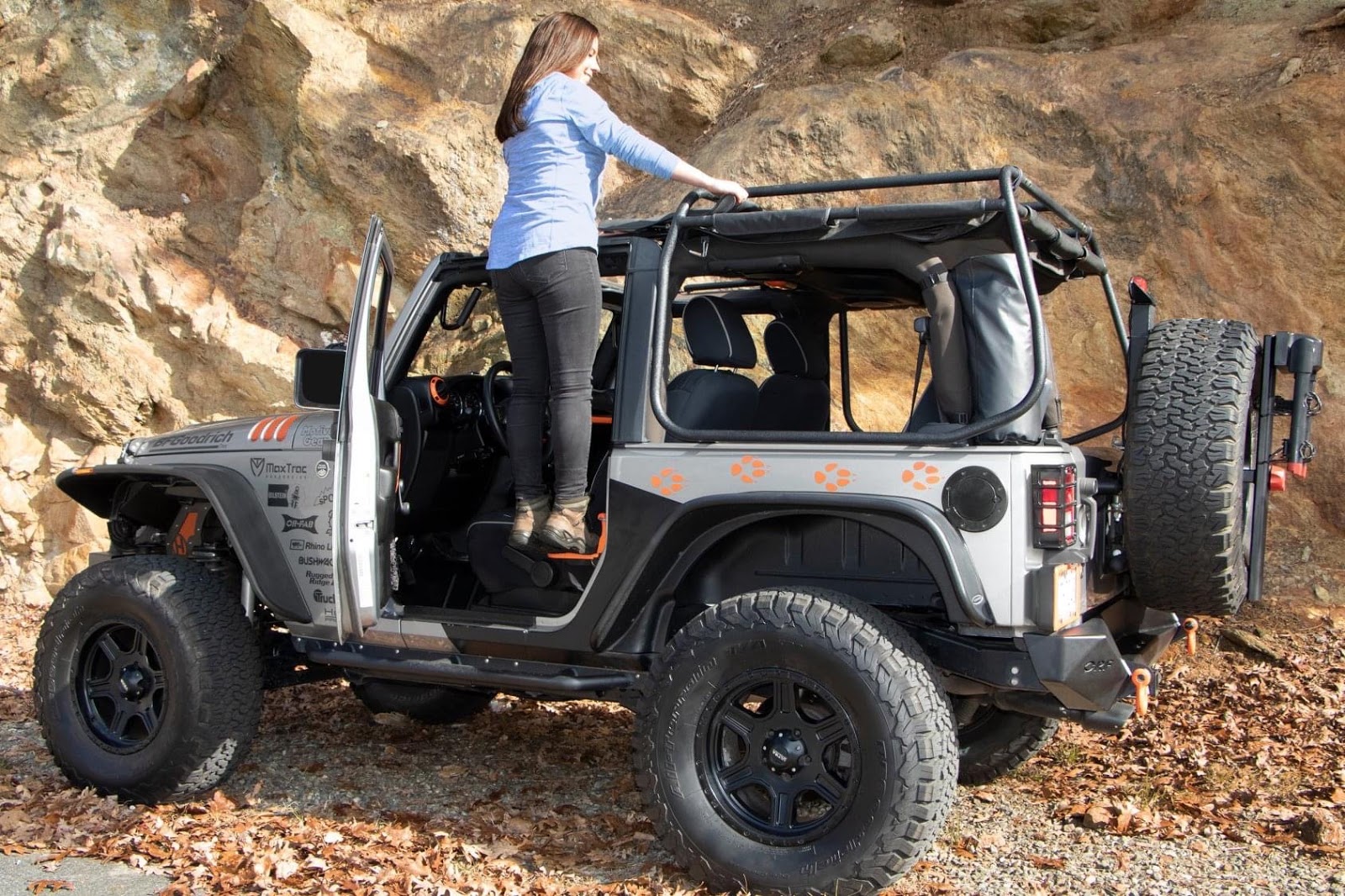 My wife and I have always been travelers and the adventurous type. One thing always held my wife up from getting after the powder on a bluebird day on her own. Because of her height, she struggles to use car top racks. Come to find out, she wasn't alone.

Knowing when to launch and other key factors will help you not only reach your goal faster, you'll end up on the front pages of Kickstarter as well as crowdfunding tracker sites.

Depending on the vehicle and type of rack, I often struggle as well. Using my background as a firefighter I knew the anatomy of vehicles. This helped me formulate the design and placement of the Moki Doorstep.

There were two HUGE hurdles I had to get past. The first one being my daughter as just born. The second was that my wife was going back to school to get her Doctorate of Nurse Practitioner. So we were definitely strapped for cash at the time. When you add in the fact that had zero business or manufacturing background it was a recipe for catastrophic disaster.

I think this is the hardest part of starting a business. Anyone can go out and get funding, have and “idea” or want to start a business. But actually acting on it is a whole different ball game. I was fortunate to have a lot of help in the early stages. If I needed some time I would often post to Facebook something like “NEED HELP! Does anyone know how to convert a 2D file into a 3D cad file?”. And sure enough, people would respond.

National TV exposure has greatly helped our retail presence. Being on a national TV gives validation to your company and retailers like to see that.

For the very question above, it ended up being my neighbor’s son who was in 8th grade who was taking an engineering class in middle school. Fast forward a week later he printed off the very first prototype on the 3D printer for class. Once I had the file in 3D AutoCAD file I once again turned to Facebooking for assistance. Next thing you know I was sitting at Panera Bread with a local machinist and an engineer from Prat and Whitney. We were able to run strength tests with their programs and finetune the doorstep. From there my first aluminum prototype was made. 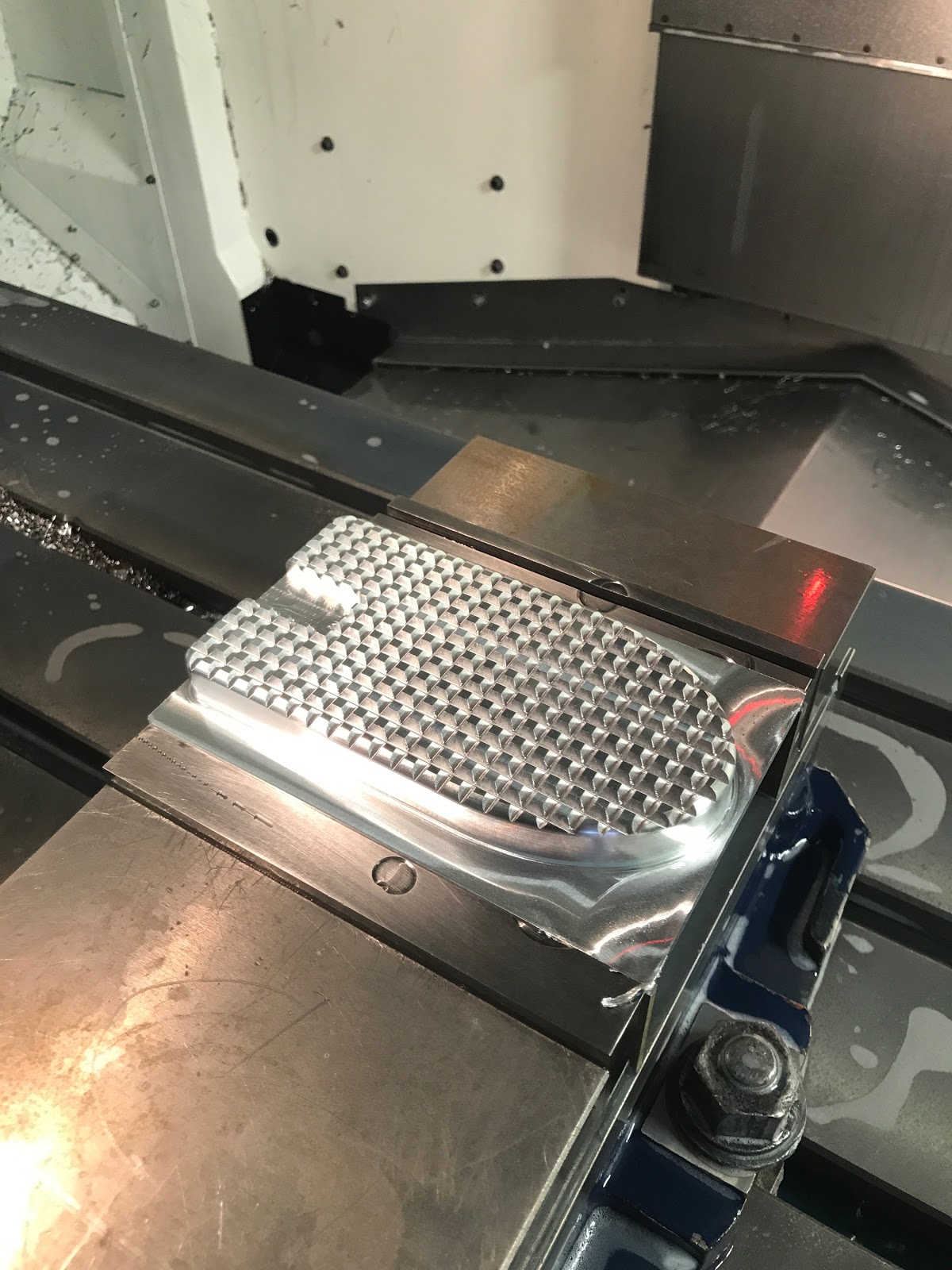 After I had the prototype made I thought I was golden and finding a manufacturer would be easy. After all, I was always hearing about how badly USA manufacturers were losing contracts to China so they were hungry to make things. I was more than willing to pay a premium to have made in the USA.

Well, I couldn't have been more wrong. Unless you’re in the medical or aerospace industry they want nothing to do with you. I hired a manufacturer rep to go out and find me one. Needless to say, I didn't receive a single quote from any of the facilities that he requested one from.

I then turned to a friend of a friend who was from India whose father was an exporter. Without him, I would have been dead in the water. Fast forward a few months, a mold was being made and we were starting to manufacture the product. While manufacturing and shipping deadlines were often missed we made it work.

Because I am an extremely stubborn person, I refused to borrow money, take out any loans, etc. I was foreign to the world of crowdfunding when I launched the company. After much research, I decided to go with Kickstarter.

I quickly realized that the exposure and knowing the algorithms was just as important as the money raised on Kickstarter. Knowing when to launch and other key factors will help you not only reach your goal faster, you'll end up on the front pages of Kickstarter as well as crowdfunding tracker sites. Armed with this information I prepared to launch and reached out to several blogs, review sites and Facebook groups (I highly recommend reaching out to as many sites/ bloggers and groups as possible. Think of it as casting a net, the bigger the net the more you’ll catch. Organic traffic is the best and bloggers provide that). I was persistent with several bloggers and outdoor websites. A fair amount of early Kickstarter traffic was from these sites. I set a low goal of $2,000.

On Launch Day I was set to travel to the West Coast and launched it at 4 am before my flight. This was so that I captured all of the overseas customers and also got a full day for western hemisphere sales. When I landed in California I had already met my goal. I was shocked because I did not do any pre-launch promotions. I knew I had a great product, but I know I needed to execute it with precision accuracy to make it successful. Over the next month, my exposure exploded. My planning had paid off. At one point I was the 8th highest crowdfunding campaign in the world. I had been featured on Gear Junkie, Cheddar TV, Unilad, to name a few.

While I was very humbled and excited I knew that there was A LOT of work ahead of me fulfilling all of the orders. Armed with alcohol and food we invited friends and family over for “Packing Parties”. Without them, it wouldn't have been possible. 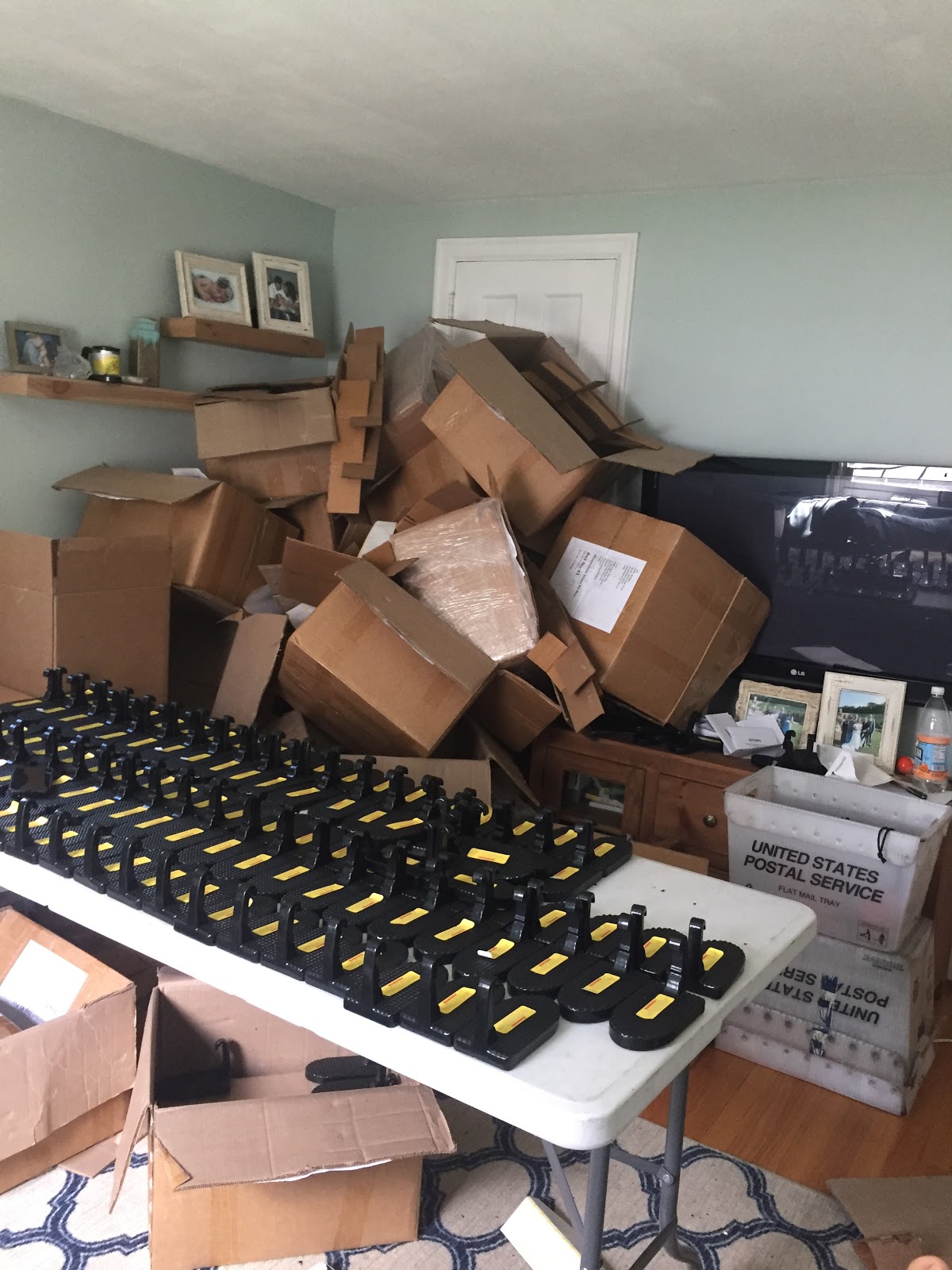 Since we are now licensing, this doesn’t really apply to us. I will say that national TV exposure has greatly helped our retail presence. Being on a national TV gives validation to your company and retailers like to see that.

We have been fortunate enough to be on Shark Tank, The View and will be on Good Morning America May 14th. That Shark Tank experience was a great one. We made one of the largest on-air deals in Shark Tank history!

While on the topic of Shark Tank, I think it’s important to note that they are ALWAYS watching crowdfunding platforms for “The next big thing”. They reached out and ask us if we had interest. With that said, we still had to go through the normal application process, but we skipped step 1 and started on step 2.

As mentioned earlier, we have now licensed the product to Rightline Gear from North Carolina. We have a unique partnership as I am still very much involved and help out at tradeshows like SEMA. We are now in major retailers like REI, Dicks sporting goods, Pep-boys, Duluth Trading post, Academy Sports and several others Most of my time is Focusing on Copycat and infringing products. We have removed over 9,000. YES, 9,000 knockoff listings off the internet. That in itself is a full-time job.

While I don't foresee us launching another product we are always looking to expand into the overseas market.

When starting a business I never imagined it would explode the way it did. Rapid growth, unfortunately, makes small problems exponentially worse. There will always be unforeseen problems no matter how well you plan things out. Always allow twice as much time as you think things will take. The advantage to that is that you set expectations and if things happen earlier you are now over-delivering and customers will be very happy with that. I will also add it is important to always be honest with customers. It'll go along ways even if it's not what they want to hear.

With the success that I had, also came the infringers. It is important to understand that while you may have a patent it is extremely expensive to enforce. Given the cost, I have found some conventions and a few non-conventional ways to protect my IP. I hope to share these strategies and techniques to inventors and entrepreneurs in the future. 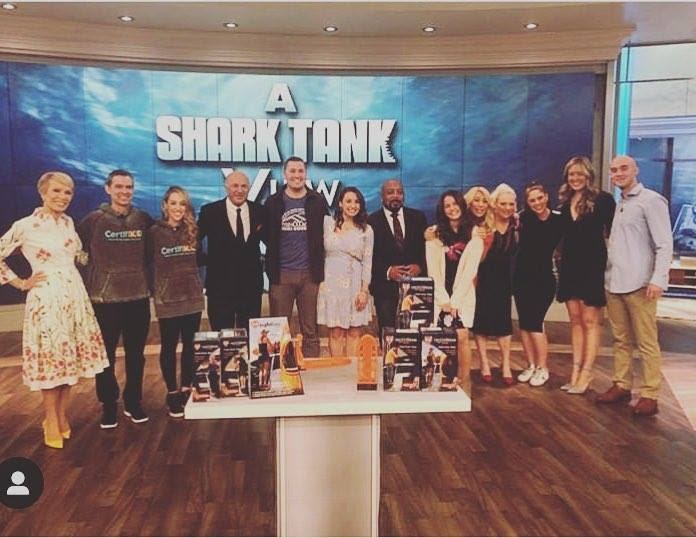 While there is a bit of a learning curve, we have found Quickbooks to be very helpful. Its ability to link to most banks is a huge benefit.

Given that I am not much of a reader, my biggest influence has been other entrepreneurs on Facebook and other forums. The free advice (not always good, but mostly) has helped me along. My favorite Facebook group is Entrepreneur Exchange.

Some quick advice I would like to give. Use the power of social media to ask people for help. You never know what your friends’ friend does for work, but your friend does. Also, I want to add that the time is never right. You need to just commit to it and give it your all. 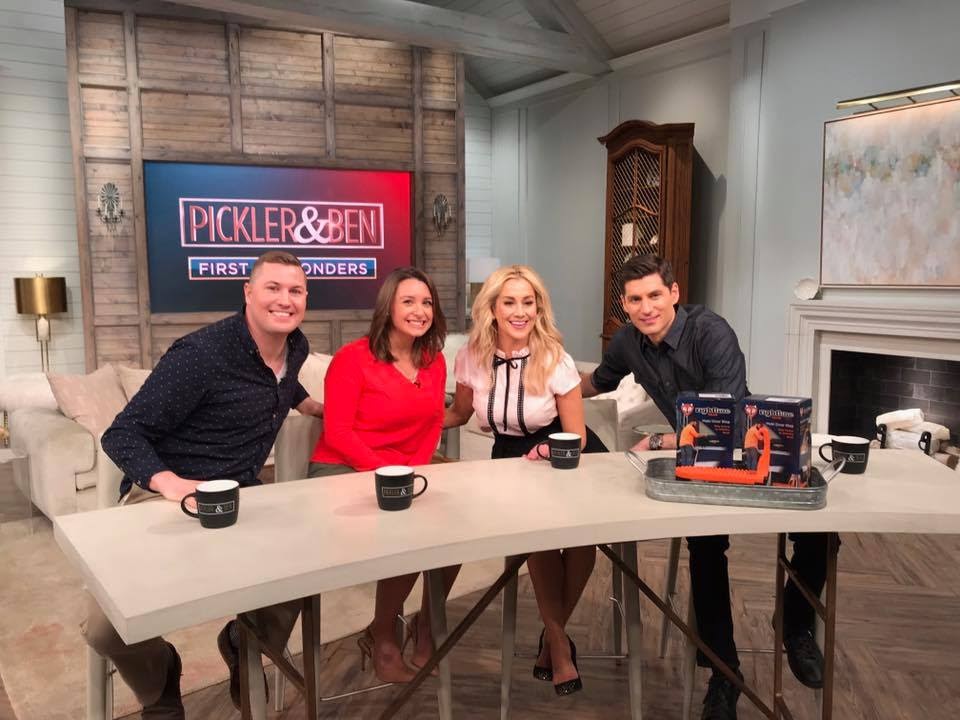