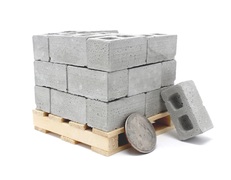 Taxjar
Discover what books Mat reccommends to grow your business!

The Tipping Point: How Little Things Can Make a Big Diffe... Malcolm Gladwell

Outliers: The Story of Success Malcolm Gladwell
Listen to the audio version of this story!
Thank you Klaviyo for sponsoring Starter Story ❤️
Want to grow your business? Join the 30,000 businesses using

My name is Mat Hofma, and I created Mini Materials. We sell miniature masonry and woodworking supplies like cinder blocks, red bricks, pallets, lumber, and even molds to pour your own cinder blocks.

Our best seller is by far the pallet of miniature cinder blocks. From Day 1 - when I posted my development story to Reddit - the general consensus has always seemed to be "I didn't think I'd ever want to buy a pallet of mini cinder blocks, but now that I see it, I really need it."

Since then we've expanded to different styles of mini masonry and even kits to build models. I was a graphic designer by trade and really wanted to start up my own e-commerce shop. I wanted to learn web design and at least get some business experience under my belt. I had never even thought of starting my own business.

I couldn't think of what to sell until I saw a guy making mini cinder blocks for fun on Reddit. I wanted to buy some, but they weren't for sale. I figured it couldn't be that hard, so I taught myself 3D design in SketchUp and made molds from 3D prints.

I figured throughout the process that I could at least sell enough to break even - since startup costs were under $500 total. The worst that could happen was that I got an education on 3D design, web design, and prototyping.

It ended up working out a little better than that.

Describe the process of creating the initial product and launching the business.

I realized that not many people do this, so I decided to make my own product. I also wanted to incorporate a wood pallet for when I ship the bricks. It would also double as a coaster!

I had never done 3D design before, so I practiced playing around on sketchup and designed 3D bricks so that I could make a mold. I used www.3Dhubs.com to find a local 3D printer to make one for me: I glued the 3D Print to some wood and made a silicon mold: I played around with a ton of different filler materials for the cinder blocks, but pure cement just broke so easily. I finally settled on a secret formula using cement and a few other materials that look and feels identical to real cement.

Here's my first batch of blocks that need sanding: I then decided to make some real wood pallets to go with the bricks, and the idea was done! They're really fun just to play around with. On the business side of things, I got an LLC through Sunbiz since I live in Florida, and made social media accounts. All for a pretty low startup cost.

Then, something kind of bad happened... months later I realized that my cement concoction wasn't good enough and all of my cinder blocks fell apart months after producing them.

I sent out an email to our first set of customers that had the low-quality cinder blocks, asking to replace them. I ended up having to completely revamp my process, and learn how cement creation really works.

Since you launched, how have you attracted new customers and grown the business to where it is today?

The fact that it's such a novel thing meant that I got a lot of free marketing. We got featured on Uncrate, the Awesomer, and Laughing Squid right off the bat.

From Day 1, I have been super active on Instagram. Through posting every day, interaction with fans, and paying for a few shoutouts, we've grown to 45k followers in 2 years. Here's a typical week on Instagram:

What really works for the creative content? I've found that making miniatures out of our products in the style of "tasty" videos with fast cuts while keeping them under a minute to be the most engaging to our audience. We would also do giveaways.

In the beginning, Instagram and Facebook videos were my main source of growth. A lot of videos went semi-viral and brought in new fans and customers. Usually once something goes viral you get picked up on some gadget sites or something like that and things kind of blow up.

If you're using Shopify, I also recommend collecting emails with the Spin-a-Sale app. I collect 50 emails a day compared to 3-4 before.

Nothing happens overnight. It's coming up on year three of Mini Materials and I'm only now feeling like things are going really well.

Growing the business meant bringing in a partner. This wasn't some kind of drop shipping thing where I could control everything from my computer. I was physically creating everything that went out the door.

I ended up bringing on one of my best friends who embodied a lot of talents that were the opposite of mine. I'm a creator and designer, while he's a numbers guy and great at getting shit done.

I cannot stress how much bringing in a partner has boosted this business. Not only are you able to get shit off your chest to your partner, but you can spend more time on your strengths.

Only recently have I delved into using Google Ads and remarketing.

If you could go back, would you do anything differently?

I 100% would have tried harder to capture more emails and send more email newsletters. It was forever before I even had an email popup. Sometimes I'd go weeks without sending anything out. I also would have started paying for advertising sooner. I paid for a lot of advertising last Black Friday, and it paid off wonderfully. I bought an editorial ad on Uncrate right before Thanksgiving that doubled returns three days after posting. I'm still seeing residual sales to this day from it.

Have you found anything particularly helpful or advantageous that you learned?

Where you are at now and what are your plans for the future?

I'm in the process of culling our products from roughly 50 to 20 to get our warehouse processes more efficient. We bought a pad printer and are going to invest heavily in creating custom construction promotional gear. This is an untapped market, and since it's mainly a bulk purchase for a lot of businesses - there's a lot of revenue to be had.

We'd like to create 1-2 products per year on par with the quality and popularity of our pallet of miniature cinder blocks. This will be tough and will require us to go through a development process unlike anything we've done before. We've got a few surprises in the pipeline.

Shopify: Easy to use. Pretty to look at. No real issues so far.

Shippo: Shipping app that connects to Shopify. Can't complain - honestly haven't looked at others very much.

Etsy: Since our products are handmade, we sell on Etsy. It actually has cheaper processing fees than Shopify! This adds about 1-3 sales per day extra for us. Hopefully it'll one day integrate with Shopify so we don't have to manually put the orders in.

Amazon: We ship a few products to Amazon for them to fulfill. Especially killer around the holidays. I feel like if you have a product for sale on Amazon that is Prime, you're going to sell at least 1000 of it in November and December.

MailChimp: Easy to use and looks pretty. Also integrates very well with Shopify.

Product Upsell App: Use this to throw $10 add-ons when people hit the add to cart button. It works surprisingly well. I need to take advantage of this more.

Spin-a-sale Interactive Pop Up: This is the most killer Shopify app I've ever used. We almost 10x'd our daily email captures with this compared to a standard pop-up.

What have been the most influential books, podcasts, or other resources for your business and why?

I know people talk shit about it a lot, but r/entrepreneur has been a pretty big help. Granted, I browsed and contributed a lot more when I was first starting out three years ago.

Along with that, the Gimlet podcast "Startup" was somewhat helpful.

I loved being on the Product Startup Podcast with Filip Valica. It was the first podcast we were on and it was great to actually sitt down and talk about everything for an hour. It brought some really cool ideas out of the woodwork. It was a great experience.

Nothing happens overnight. It's coming up on year three of Mini Materials and I'm only now feeling like things are going really well.

If you're going to do something, you have to be in it for the long haul. Long-term commitment to a solid idea will usually yield results.

Make sure to have a good work/life balance. Don't neglect family or friends because you don't know how to work efficiently.

Mini Materials has provided an update on their business!

3 months ago, we followed up with Mini Materials to see how they've been doing since we published this article.