Hi, I’m Qin Xie, a journalist, and editor based in London. I recently launched Money Talk, a reader-funded newsletter on personal finance.

It’s designed to be like a weekly personal finance gym session - to help you save money, manage your wealth (or lack of) and grow your savings. Every week, there are actionable tips based on what’s happening in the world and once a month there’s a deep dive on a specific skill.

It’s early days still - Money Talk went live at the end of May - but I made £100 in the first month and a couple of people even signed up for a whole year.

My day job is a travel editor for a national newspaper in the UK, which I absolutely love. But because of the coronavirus pandemic, I was put on furlough at the beginning of May.

The great thing about launching a newsletter as a subscription product is that the overheads are low - or in my case, zero. The only thing I had to give up was my time, and I had plenty of it.

That month coincided with lots of journalists around the world getting laid off. Needless to say, I was seriously worried about whether or not I’d have a job by the end of the furlough period and how I’d make up the difference in income.

Late one night, I was “doom scrolling” and came across a post on Substack about the future of journalism. It really resonated with me because of what was happening in my industry, so I signed up.

Even though I normally write about food and travel, personal finance was the obvious topic because I read a lot of it and, because of the pandemic, I had already been writing a lot about consumer rights from a travel perspective.

It was by no means a fully thought out idea though. The name I originally signed up with was Money, Money, Money - you can see what was on my mind! After I slept on it, I settled on Money Talk.

The time between coming up with the concept and the launch was literally less than 48 hours.

I signed up for Substack late on Monday night and pushed the launch button on Wednesday. By Sunday, I had sent out the first newsletter to paying subscribers. It was probably the antithesis of your typical launch and almost everything else came afterward - I didn’t even have a logo until more than a week later!

I think the reason why Money Talk had been created had a lot of influence over how it came together. Because of what was happening in the journalism industry, I felt a real urgency to do rather than to just think about it. And because I had the free time, I could just throw myself into it.

It helps that I’m a one-woman band and can pivot and adapt as needed. In fact, over the last six weeks or so, I’ve been subtly tweaking the concept. It still adheres to the framework I introduced new subscribers to the day after the launch, but the content is much more focused on the end goal - to help people manage their finances and create wealth. 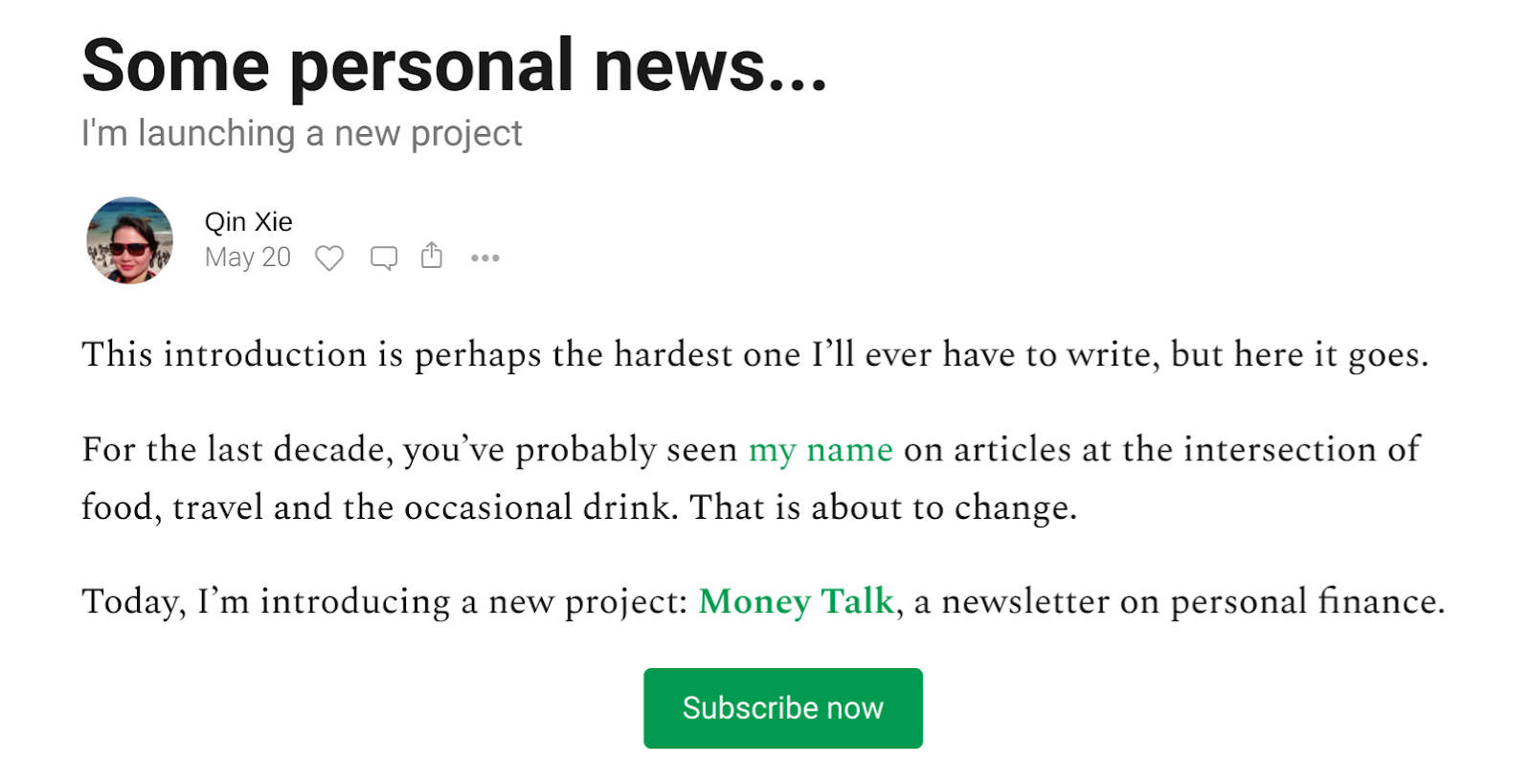 The great thing about launching a newsletter as a subscription product is that the overheads are low - or in my case, zero. The only thing I had to give up was my time, and I had plenty of it.

That’s why it made sense to use the launch as proof of concept rather than wasting time to do additional testing - if lots of people signed up when I told them about it then it’s a sign it’s going to work. And thankfully they did!

Plus, I was sort of my own customer. I needed greater control over my own finances as we’re heading into what’s almost certainly a recession, and I wanted to equip myself with the knowledge on how to handle it.

So for my launch, I hand-picked just over 200 people from over 2,000 Gmail contacts to receive my first post, announcing the launch. They were all friends or colleagues, and all people who I thought would appreciate hearing about my new project.

I also combined the launch with market research - they could tell me what they wanted to read about in the newsletter and lots of people did. From that, I worked out what I wanted to cover - but to be honest it’s something I’ve also been refining over the weeks. 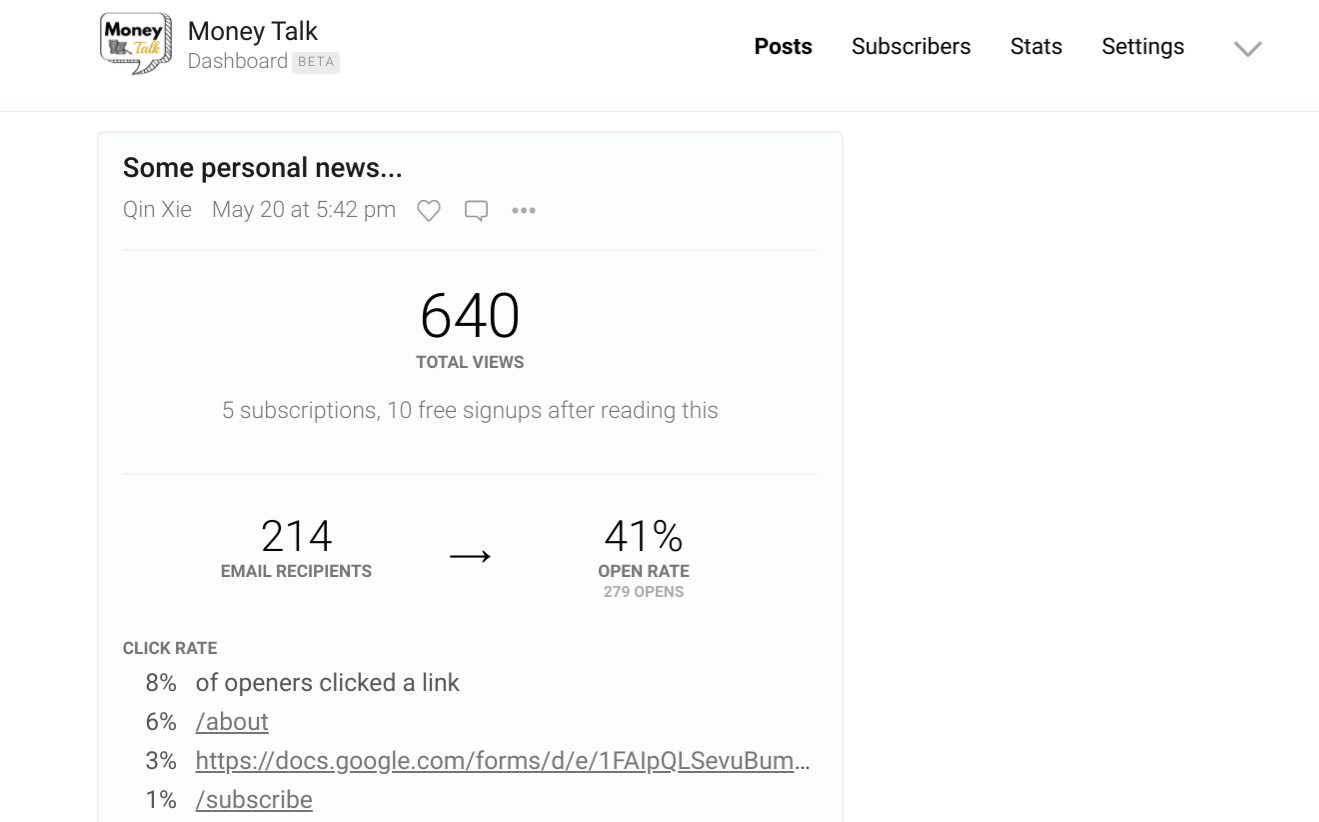 Aside from my launch post, LinkedIn has turned out to be one of my biggest successes.

I have around 3,000 contacts on there but to be honest I only sporadically used it to promote articles in the past. But after announcing that I was launching Money Talk on there, a lot of people commented, shared, and signed up.

I think because the platform is centered around work, money is a great fit. That said, I was offered some free advertising credits to use on the platform and it didn’t do anything - not even a click-through. 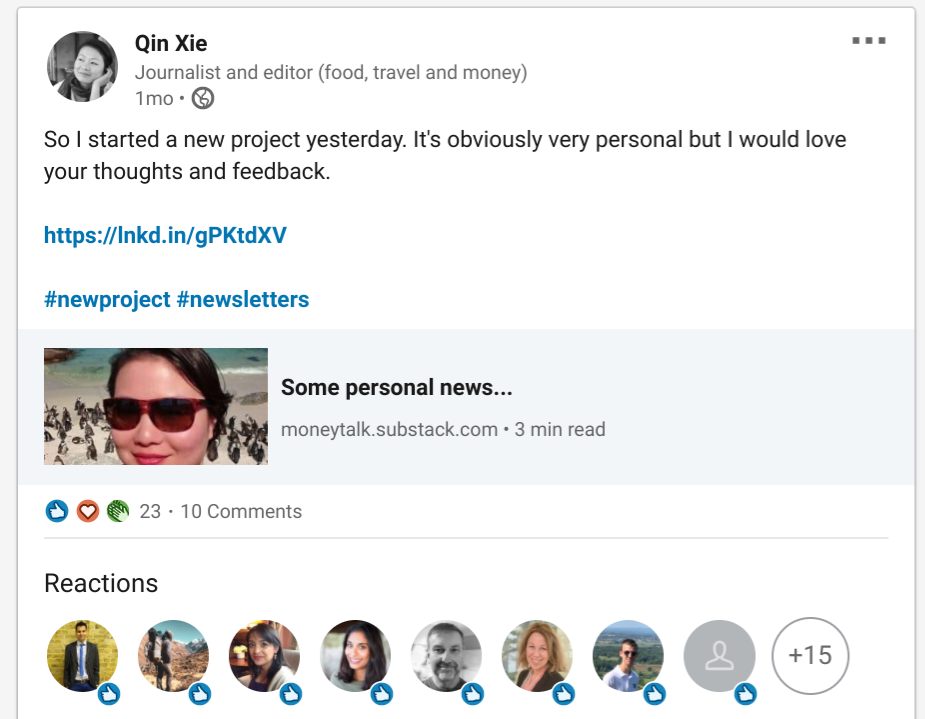 One thing I love is Indie Hackers; it’s extremely engaging and I get lots of traffic from there. But it’s more than just eyeballs over my product - it’s where I track Money Talk’s milestones and get start-up advice.

I also tried podcasting, e-book, and other formulaic strategies with mixed success. I wrote more about these in detail over on Medium.

The initial reaction to Money Talk has been really good and now it’s just a case of keeping the momentum going.

Over the last six weeks, I’ve been learning more about the newsletter process and branding so I can sharpen the product I offer and ultimately make it more valuable to my subscribers. I want to continue learning as I have a lot of side projects planned for subscribers in the next six months.

I’m also thinking about other ways to market Money Talk. A lot of the advice on the internet is the same: share on social media, use a freebie, show value, etc. Some of it is useful but some of it feels very formulaic. I think people are smart, and they’ll very quickly realize when they’re being marketed to, so you need to be upfront about that.

One thing that I do want to try is cross-promoting with another newsletter - I haven’t spotted any newsletters doing a similar thing to me in the UK yet so I’ve created a Google doc to help increase the chances of finding my match.

I’m not sure why but as soon as I launched Money Talk, my mindset went into startup mode rather than thinking about it as another journalism project. This has actually been extremely helpful for me because it helped me find communities that I wouldn’t have thought of otherwise - Indie Hackers was one.

I also avoided the most obvious place to look for help: Google. If you think about it, the top result you see is going to be the top result everyone else sees. And if everyone is following the same steps, the probability of standing out from the crowd is pretty low.

Money Talk is hosted on Substack, which takes care of the subscription side of things. They also take 10% of your subscription fee and you have to pay the Stripe fee on top of that. It’s something I’m happy with for the time being though because there is no financial outlay for me.

Tim Ferriss’s The 4-hour Work Week. So much of it was irrelevant to me when I first listened to it as an audiobook but the advice has since become relevant. It’s also what led me to his podcast, which has been a listening staple for the last few years.

Freakonomics Radio has also been a great joy. It was another one I discovered having first read the best-selling book Freakonomics, by Steven Levitt and Stephen Dubner. It was really good at getting people to see the world in a different way, which is what I want my newsletter to do.

As I mentioned earlier, the top-ranking advice on Google is generally quite formulaic - they’re geared towards a huge audience. But what has worked for other people may not necessarily work for you.

Free Guide
How To Start An Email Newsletter Business
If you're starting an email newsletter business, or if you're looking to ways to run your existing business better, this free 25 page guide is for you.

You might also like:
52 Business Ideas You Can Start With Little Cap...
Samantha Walls
50 Lucrative Ways to Make Money on the Side
Samantha Walls
Designing and Prototyping A Product
Starter Story
Become a premium member to get full access.
Ready to bring your idea to life?
Join Starter Story to get the greatest companion to starting and growing your business.