Joe Rogan started his career as a stand-up comedian in 1988 and since, has gained fame and clout running his YouTube podcast - The Joe Rogan Experience.

He covers popular subjects from all walks of life - whether it's politics, religion, productivity or business.

Joe has a very loyal audience and has a lot of wisdom to share.

Here are 50 of Joe Rogan's best quotes and advice to help you stay motivated:

“You can’t measure what’s inside a man’s heart.” – Joe Rogan 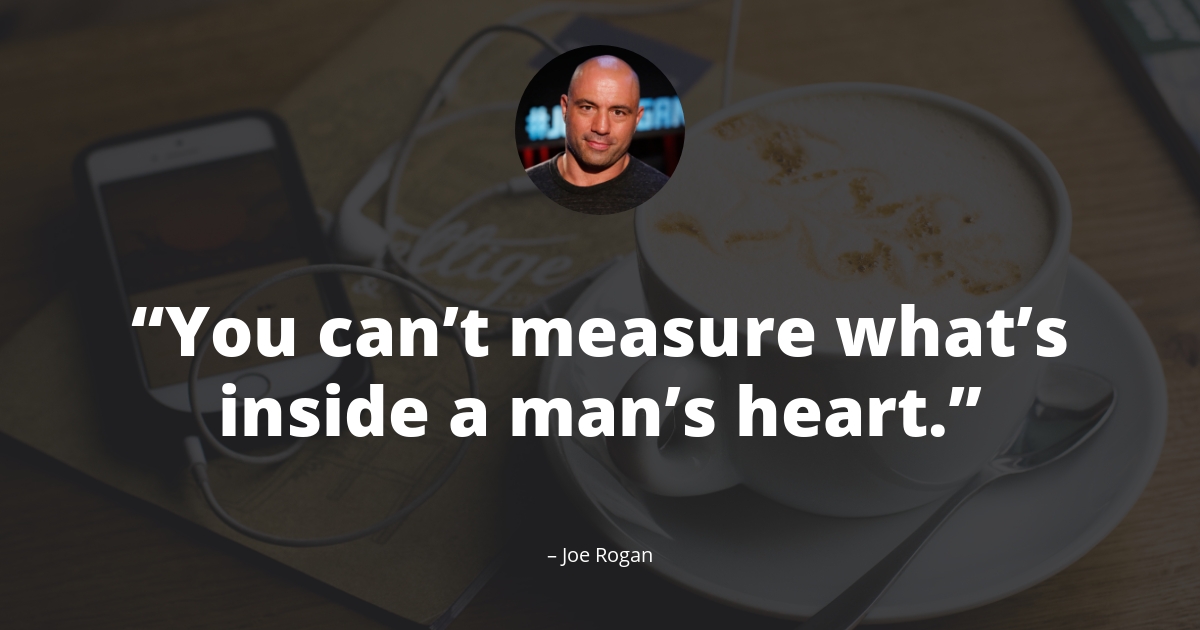 “There’s a confidence and a mental toughness that comes from the very highest level of competition, whatever the sport is. Whether it’s boxing or wrestling, or whatever.” – Joe Rogan

“Life is strange. You keep moving and keep moving. Before you know it, you look back and think, ‘What was that?’” – Joe Rogan

“Haters are all failures. It’s 100% across the board. No one who is truly brilliant at anything is a hater.” – Joe Rogan 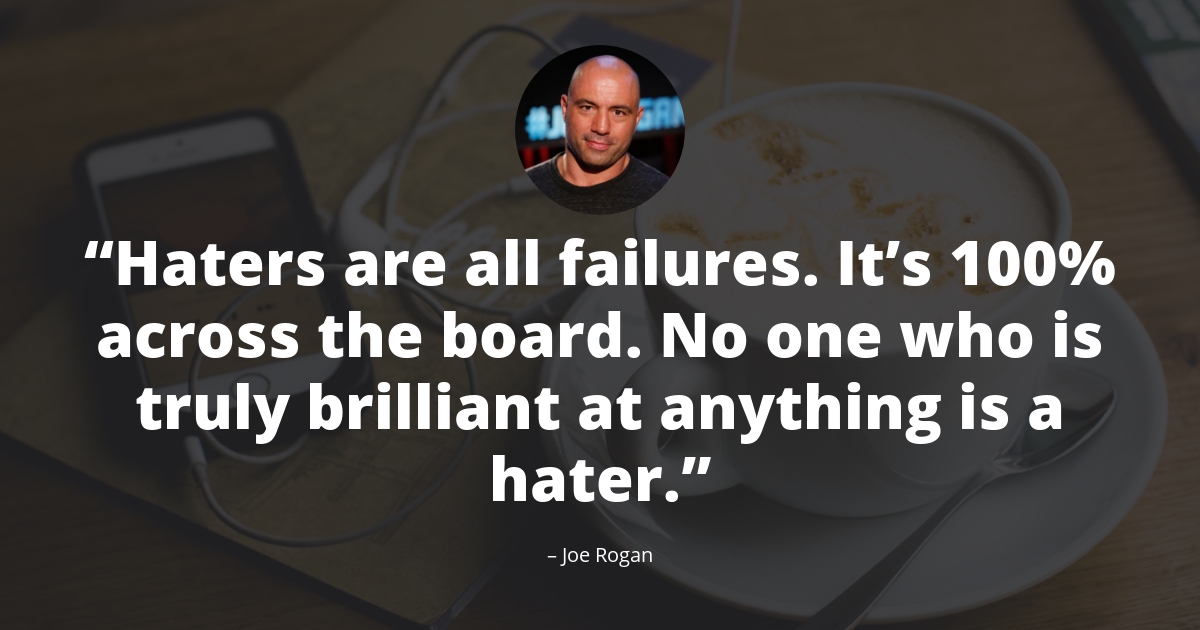 “Someone else’s success does not equal a failure for you.” – Joe Rogan 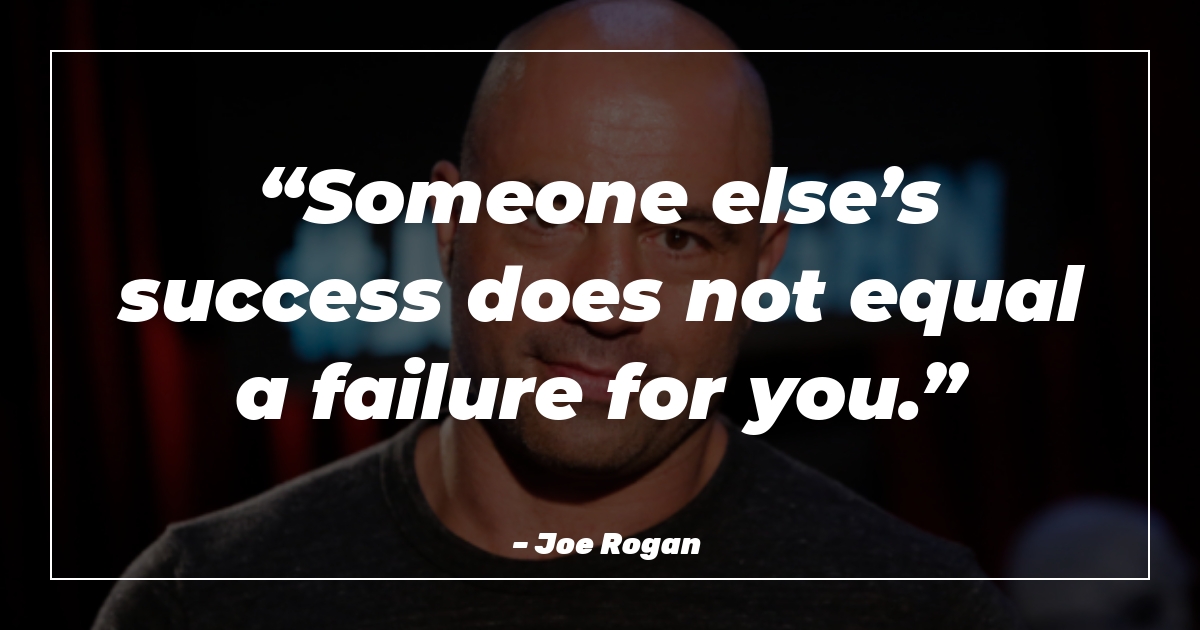 “People for the most part can smell lies.” – Joe Rogan 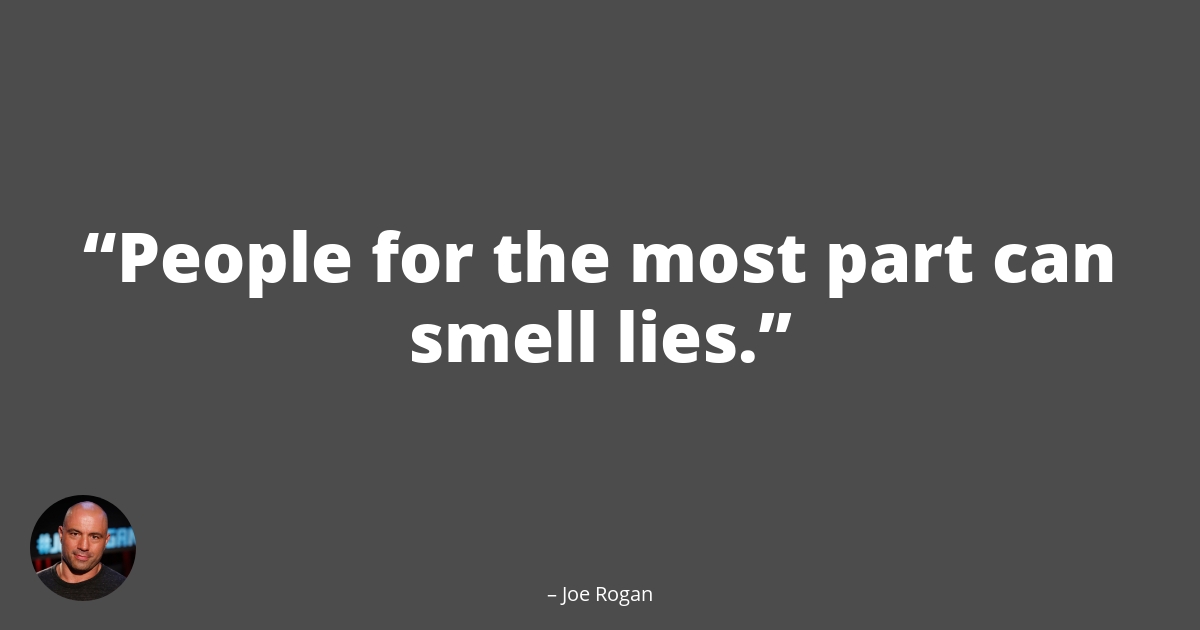 “That’s my only goal. Surround myself with funny people, and make sure everyone has a good time and works hard.” – Joe Rogan

“To me, comedy is a great occupation because I don’t really worry that much about what other people think of me.” – Joe Rogan

“It’s been one of the most important tools for me in personal growth for understanding myself, how I am, and what effect I do have on other people.” – Joe Rogan

“The misconception is that standup comics are always on. I don’t know any really funny comics that are annoying and constantly trying to be funny all the time.” – Joe Rogan 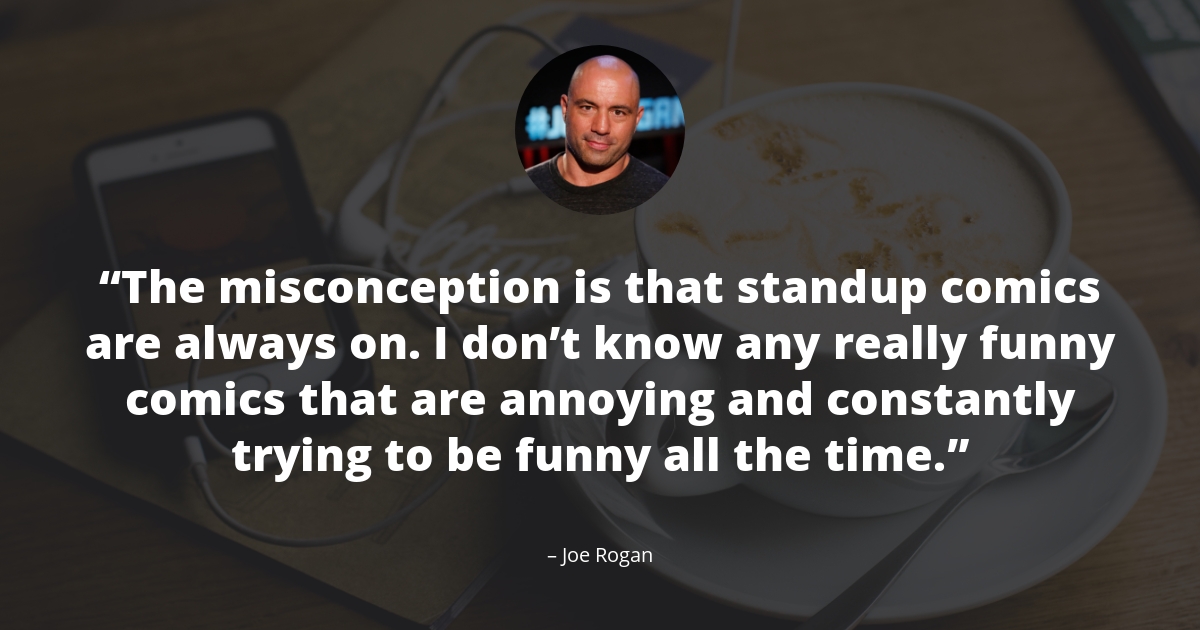 “If you are the greatest, why would you go around talking about it?” – Joe Rogan

“By putting yourself in that intense form of stress, it makes regular life more peaceful.” – Joe Rogan

“Reality really is a theatre. There’s no other way to describe it. It’s all so nonsensical, ridiculous and chaotic.” – Joe Rogan

“Be the hero of your own story.” – Joe Rogan 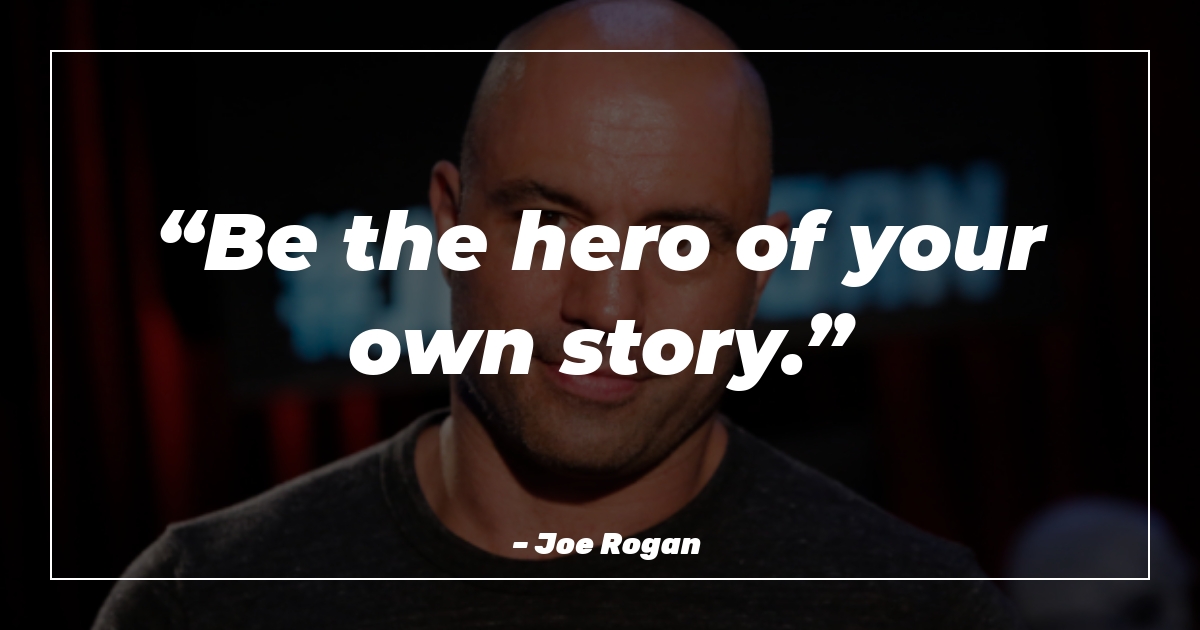 “When someone comes along and expresses him or herself as freely as they think, people flock to it. They enjoy it.” – Joe Rogan

“Excellence in anything increases your potential in everything.” – Joe Rogan 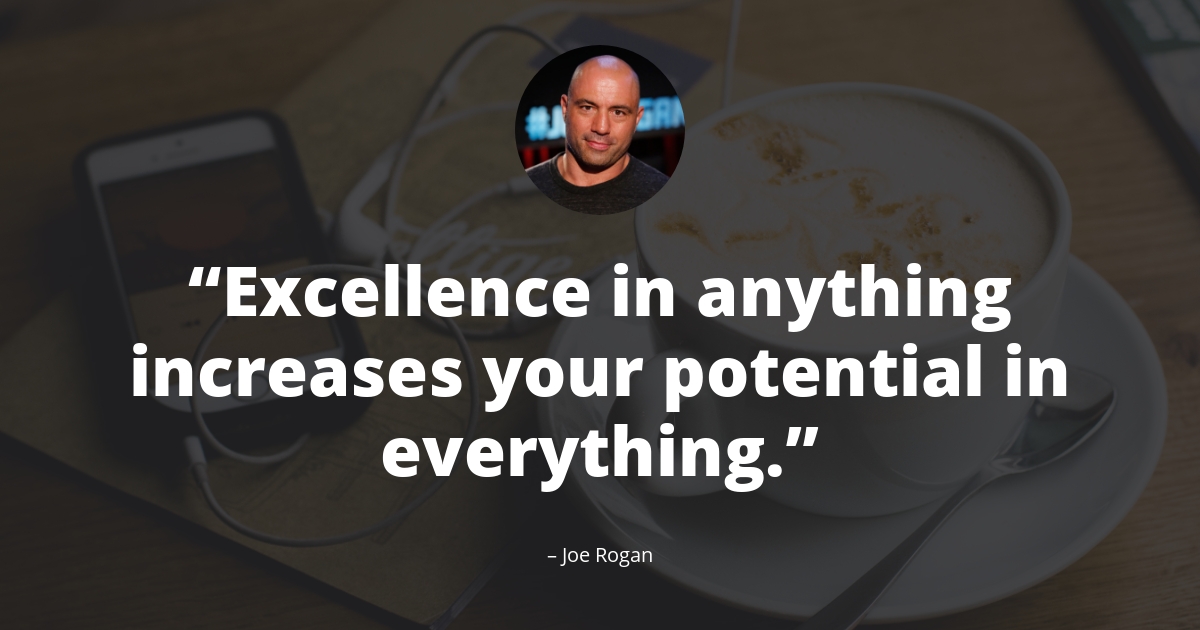 “The time you spend hating on someone robs you of your own time. You are literally hating on yourself and you don’t even realize it.” – Joe Rogan 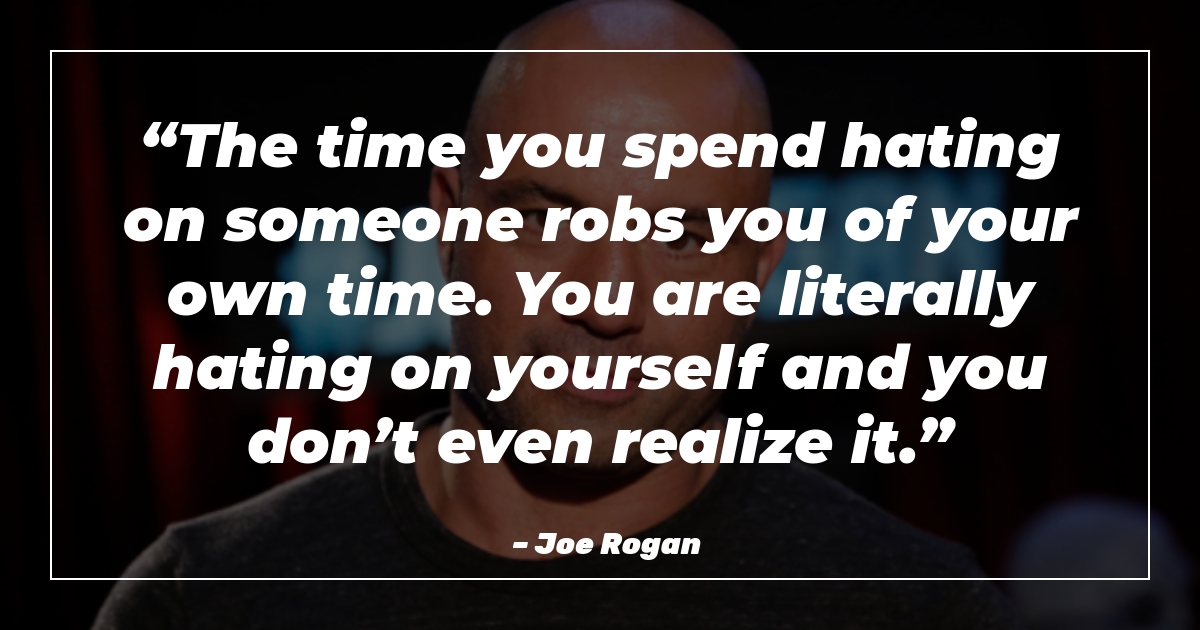 “My act is so completely and totally uncensored that the only way I could really pull it off is if I treat the audience like they’re my best friends.” – Joe Rogan 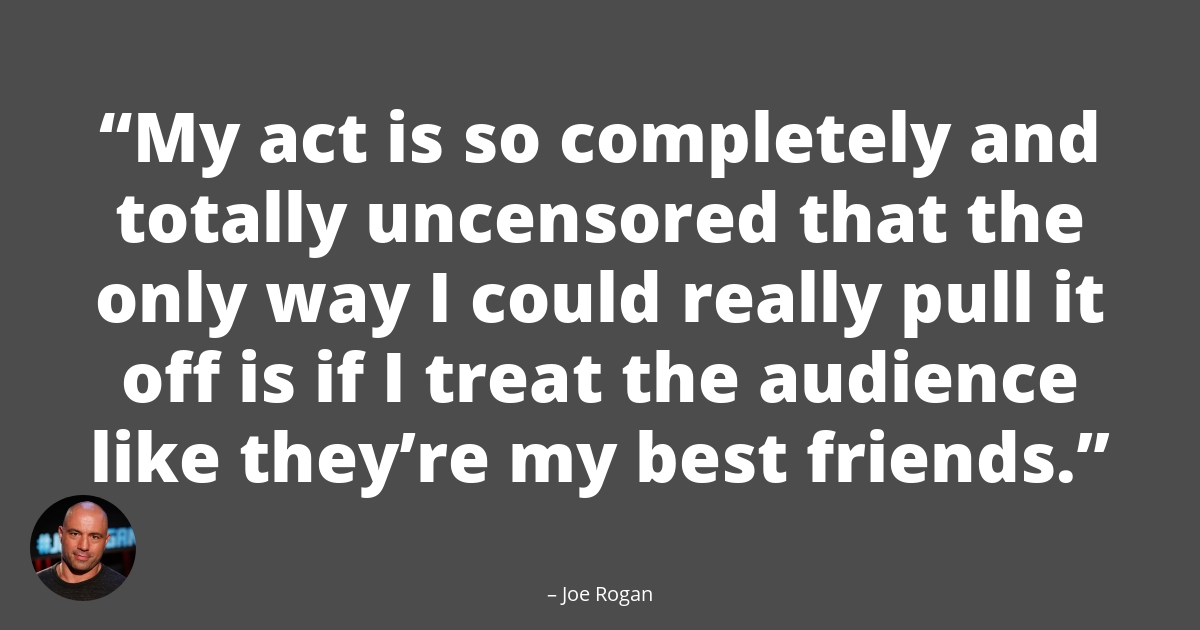 “The audience changes every night. You’re the same person. You have to speak your mind and do the stuff that you think is funny and makes you laugh.” – Joe Rogan 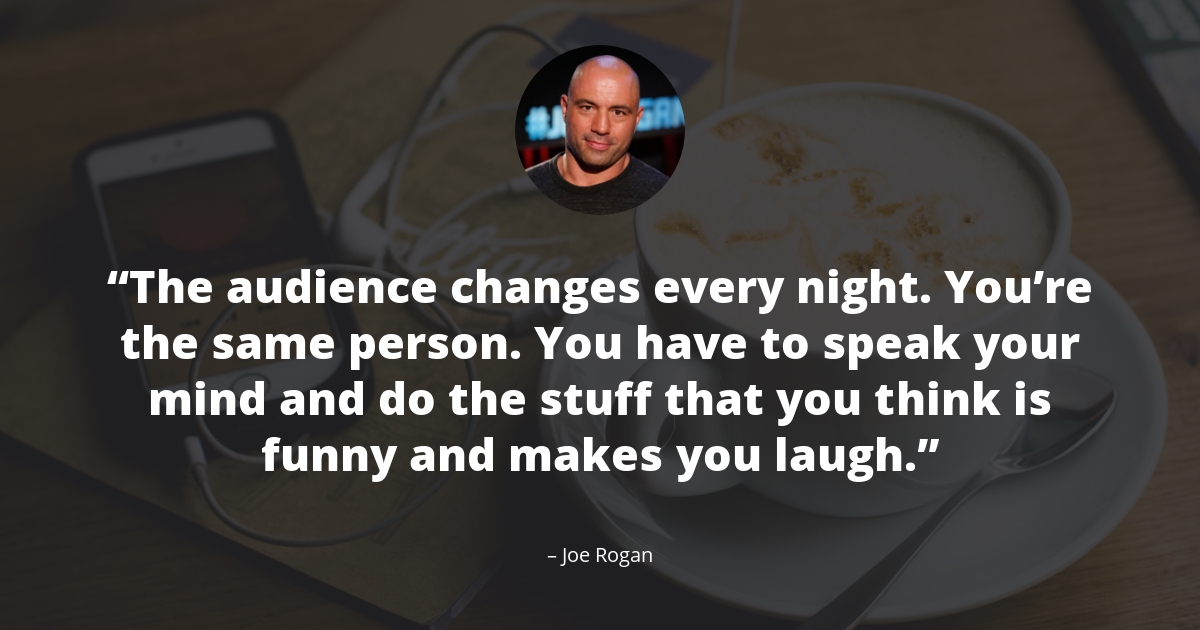 “The quicker we all realize that we’ve been taught how to live life by the people that were operating on the momentum of an ignorant past the quicker we can move to a global ethic of community that doesn’t value invented borders or the monopolization of natural resources, but rather the goal of a happier more loving humanity.” – Joe Rogan

“I want to talk about the nature of human beings or how we’re evolving as a race.” – Joe Rogan 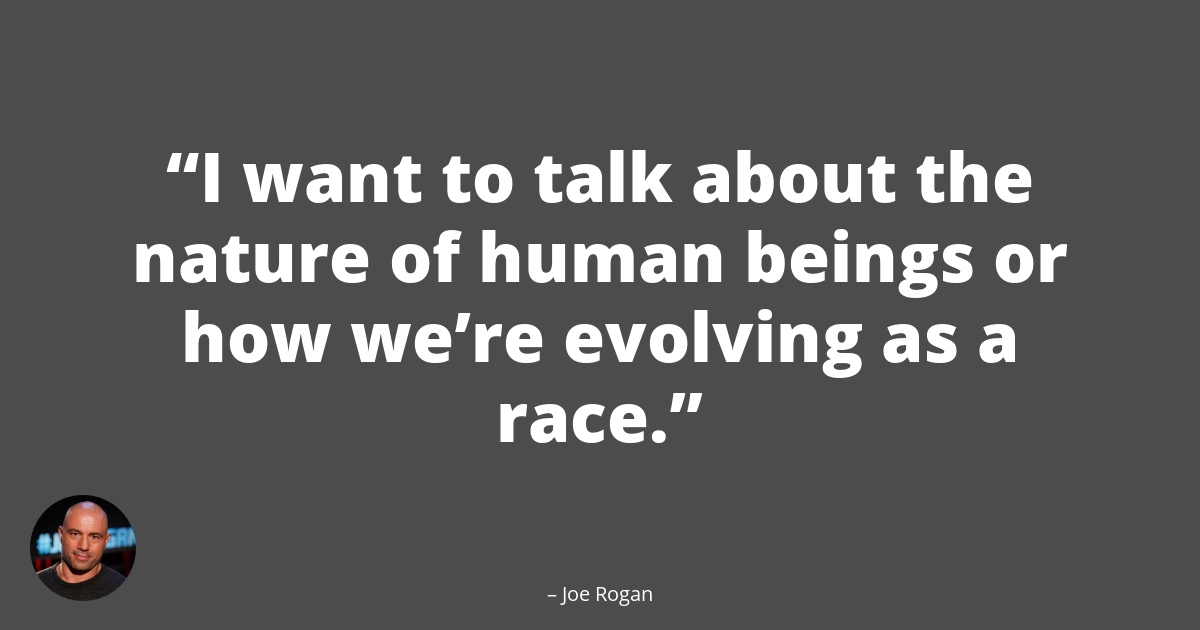 “Once you understand what excellence is all about…you see how excellence manifests itself in any discipline.” – Joe Rogan 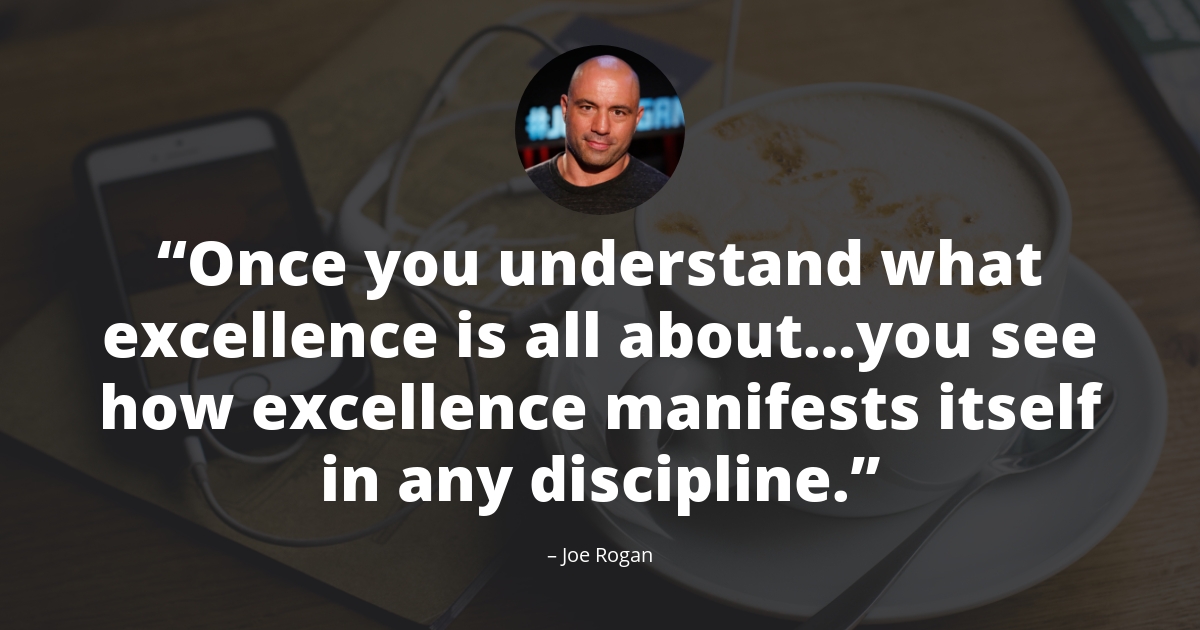 “I want to make sure that everything that I’m creating, I’m creating it so other people get enjoyment out of it. And that’s the reward that you get for that.” – Joe Rogan

“The beautiful thing about podcasting is it’s just talking. It can be funny, or it can be terrifying. It can be sweet. It can be obnoxious. It almost has no definitive form. In that sense it’s one of the best ways to explore an idea, and certainly much less limiting than trying to express the same idea in stand up comedy. For some ideas stand up is best, but it’s really, really nice to have podcasts as well.” – Joe Rogan

“There’s only one way to get good at anything; you surround yourself with the bad motherfuckers who are doing exactly you do and you force yourself to keep up and inspire each other.” – Joe Rogan 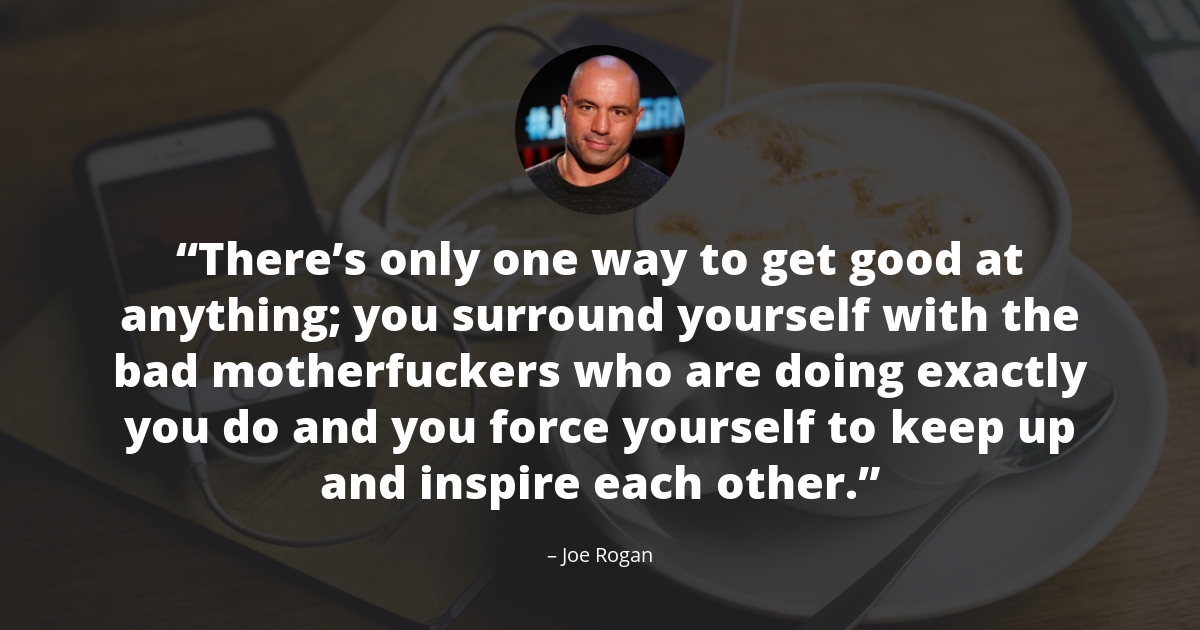 “If you ever start taking things too seriously, just remember that we are talking monkeys on an organic spaceship flying through the universe.” – Joe Rogan

“I’ve been inspired by a shitload of people in my life so if there’s ever anybody that I can inspire, to me that’s a huge gift. To be able to turn that back around.” – Joe Rogan

“Greatness and madness are next door neighbors and they often borrow each other’s sugar.” – Joe Rogan 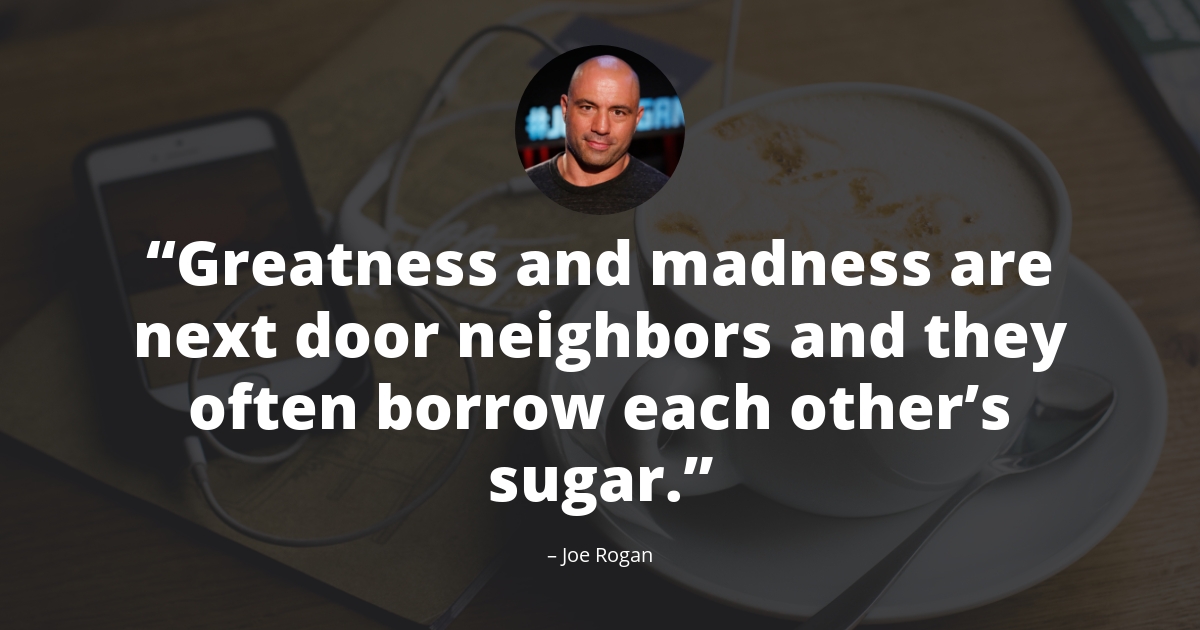 “Not all comedy clubs or situations are ideal, especially when you’re first coming up and I think that’s good for you. Eventually, you get to express your real personality.” – Joe Rogan

“I’ve done jiujitsu a huge chunk of my life, and I try to spend a lot of time educating people on the nuances, the subtleness of the ground game. It’s a big part of mixed martial arts.” – Joe Rogan

“What’s interesting about science is that we’re constantly discovering new things about the universe, about ourselves, about our bodies, about diseases, about the possibilities of the future. It’s amazing. Science is one of the coolest things about being a human being – without a doubt.” – Joe Rogan

“Have you ever talked to someone, and you’re not even really talking to them? Actors are the worst for that.” – Joe Rogan

“The key to happiness doesn’t lay in numbers in a bank account but in the way we make others feel and the way they make us feel.” – Joe Rogan 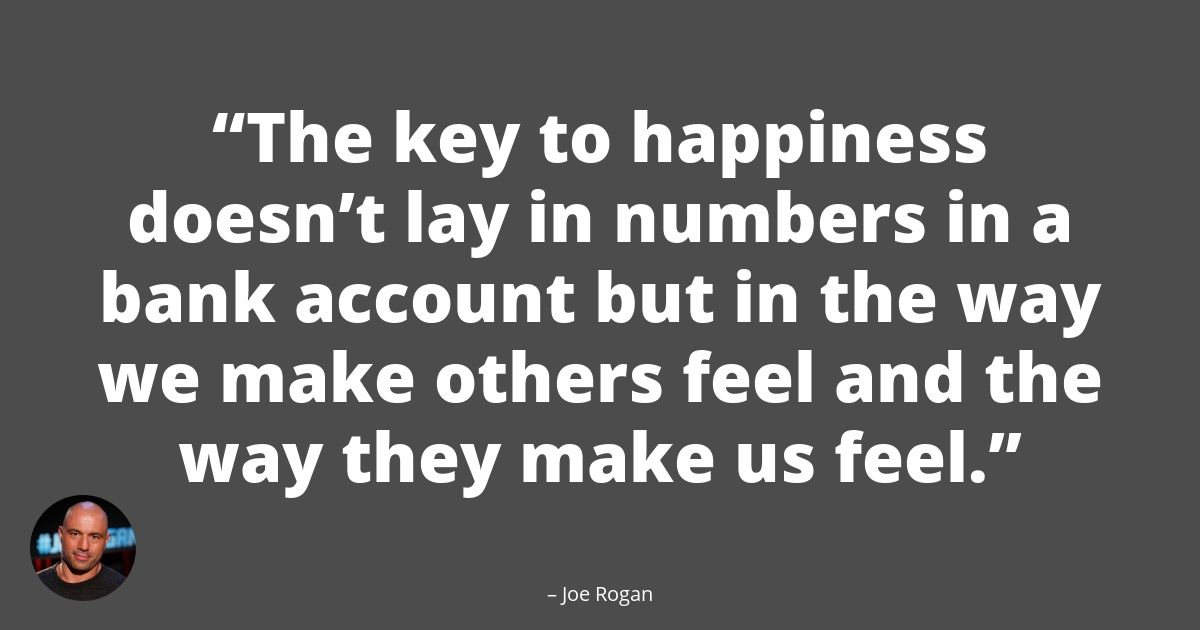 “I’m obsessed to extreme winners because I think there’s a madness to it. I truly believe that in order to truly be great at something you have to give into a certain amount of madness.” - Joe Rogan 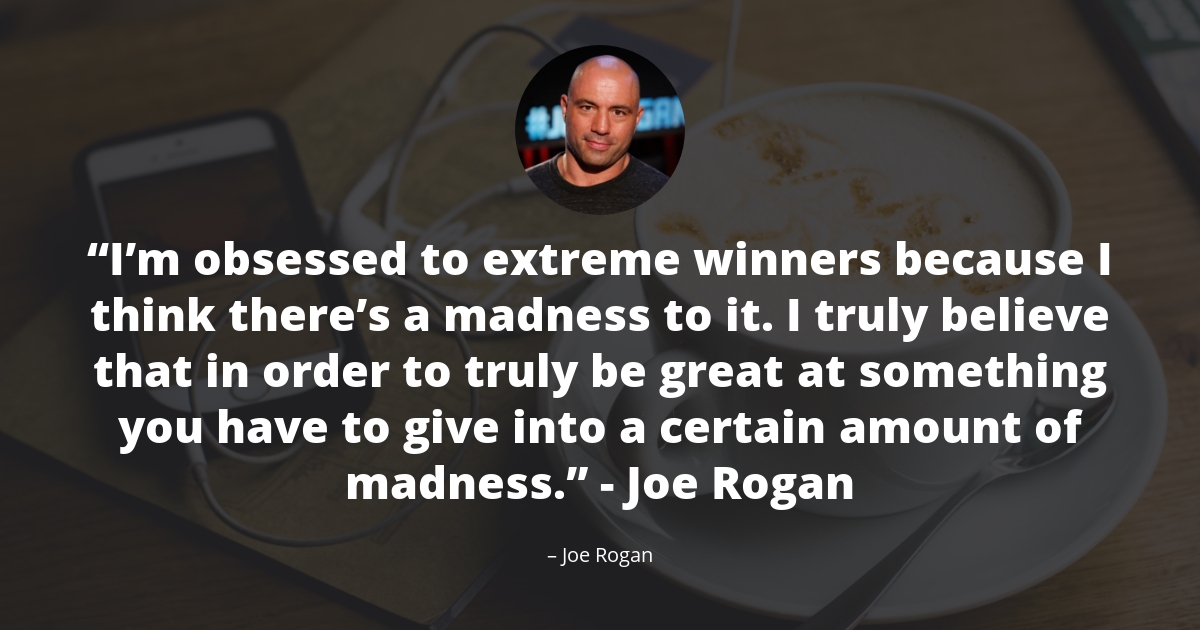 “No matter how civilized we are and how much society has curbed violent behavior. Human beings still have the same genes they had 10,000 years ago. Our bodies are designed to have a certain amount of physical stress and violence in them. We’re designed to run from jaguars and fight to defend our territory.” – Joe Rogan

“Being a celebrity or anything else where you’re really ambitious, it’s really a game to see how successful you can get.” – Joe Rogan

“Richard Pryor is, in my mind, the most honest comedian. He bared his soul to people. I think that’s why everybody loved him so much.” – Joe Rogan

“Never stay in a bad marriage, and don’t hang around with psycho coke fiends.” – Joe Rogan

“Kindness is one of the best gifts you can bestow…We know that inherently that feels great.” – Joe Rogan 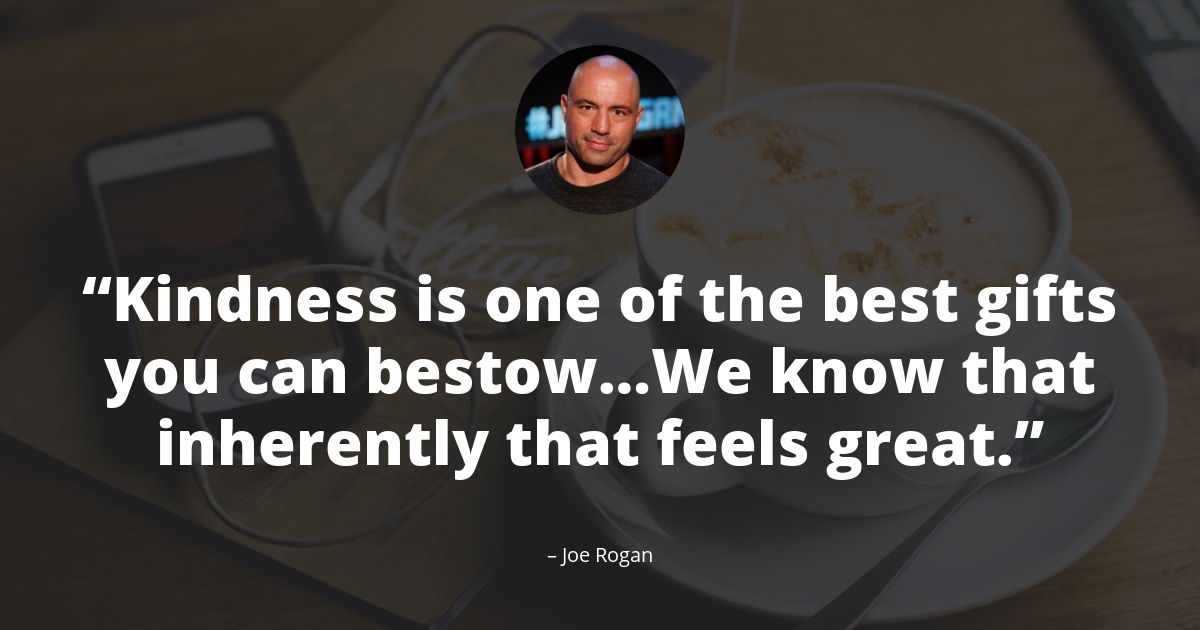 “Life is about the pursuit of excellence. That pursuit is probably more exciting to me now more than ever.” – Joe Rogan 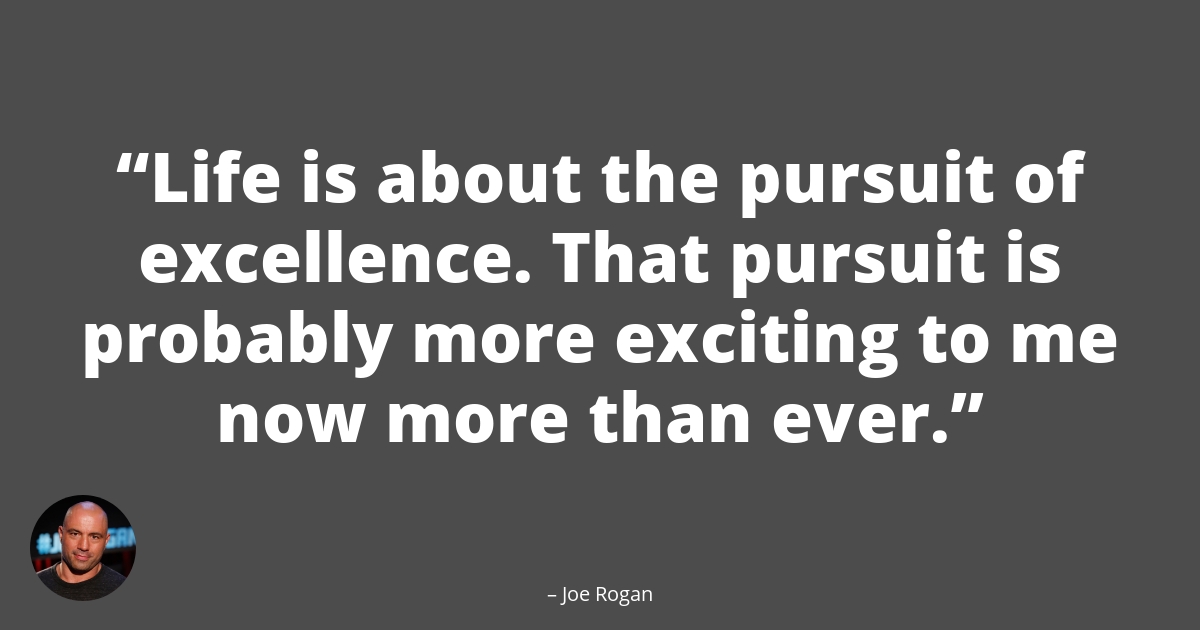 “There’s a never-ending ocean of techniques out there.” – Joe Rogan “We’re constantly re-evaluating the potential for life. We’re finding it where we didn’t think it could exist, such as volcanic vents and other extreme conditions like under arctic ice. We’re finding life in these incredibly harsh and dynamic conditions, so we’re having to re-evaluate our own ideas of what’s possible on this planet alone.” – Joe Rogan

“Martial arts are a vehicle for developing your human potential.” – Joe Rogan “Work for that feeling that you have accomplished something… Don’t waste your time on this earth without making a mark.” – Joe Rogan 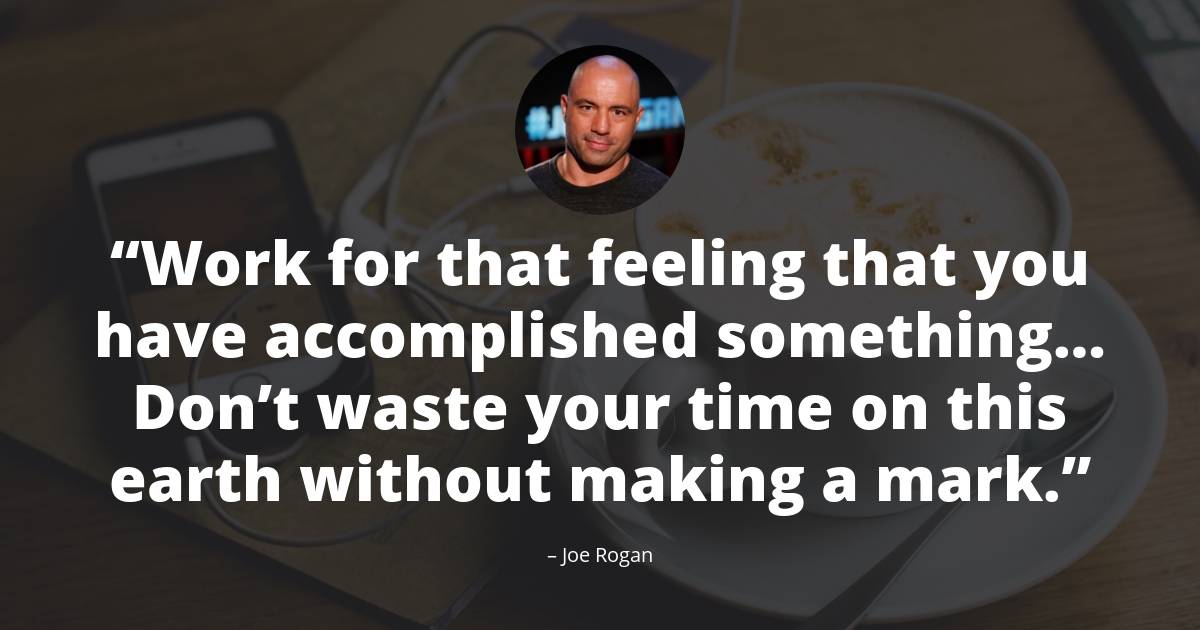 “I had a sense of who I was before I got famous.” – Joe Rogan 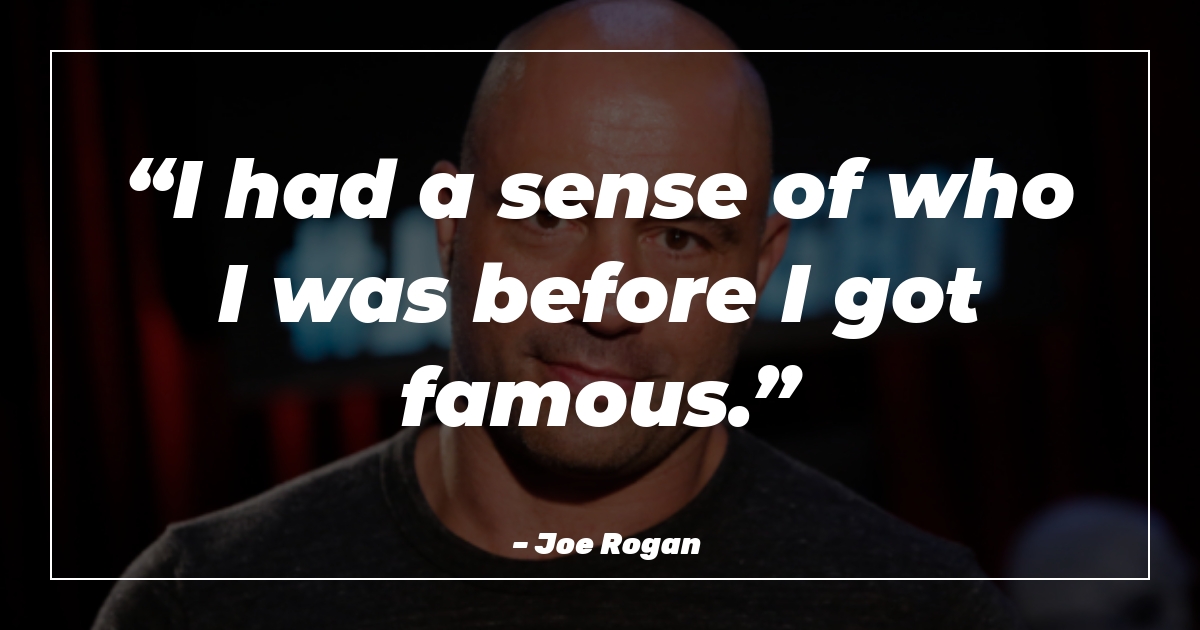 “One of the things that happened is I did a lot of shitty gigs. When you do a bunch of shitty bar gigs you have to get used to people yelling at you, you’re used to thinking on the fly, to dealing with weird situations.” – Joe Rogan

“The mind is the most important thing of the big picture and no one has a stronger mindset than amateur wrestlers.” – Joe Rogan 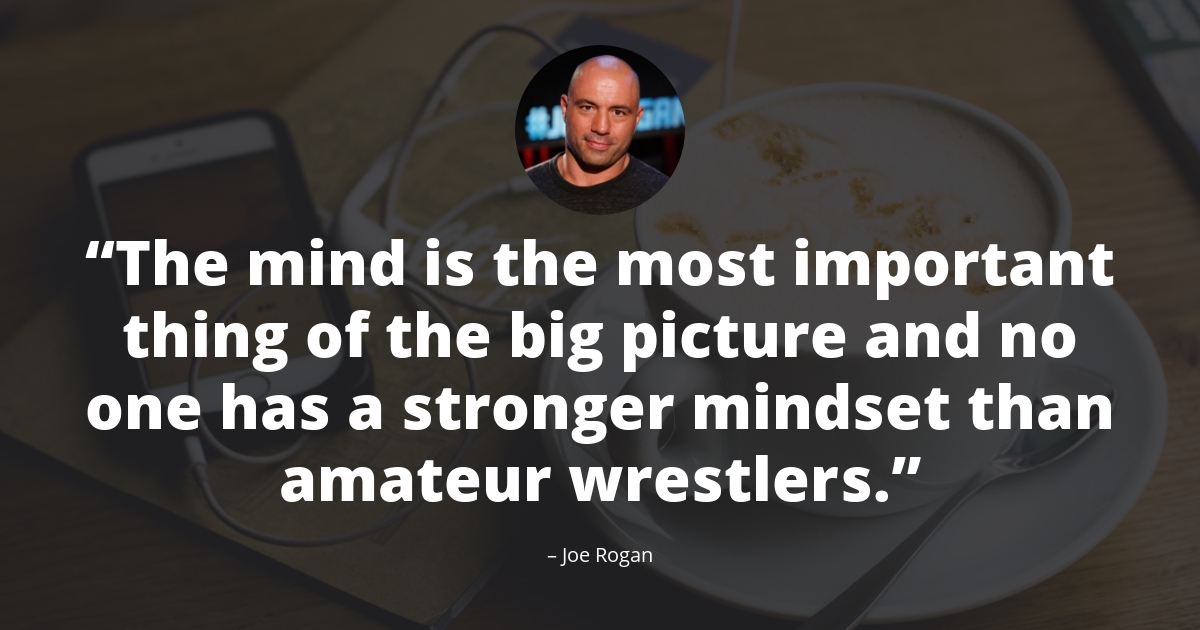 How a food blog grew a niche audience to over 35,000 active subscribers
$50K+ in savings
Access to hundreds of the best tools to run your business. Including: $5,000 in AWS credits, $1000 Airtable credit, $1,000 in Notion credits, $1,000 in Miro credits, $10K in transactions without Stripe fees, 12 months free on SendGrid, 6 months free on Zendesk, Typeform, 50% off Quickbooks, Hotjar, Algolia, and hundreds of other tools.
3K+
case studies
82.1K
subscribed
400+
hours of content
5M
visitors

"Thank you for creating this. It's refreshing to see how real founders grow their business."
Enter your email to get started.
To read this exclusive story, join Starter Story Premium!
Premium
Full access to case studies, filters, and business ideas database
$6.20 $2.67/week
Billed annually
Unlimited access
Unlock 3,500+ case studies
Find your next idea - 4,350 business ideas
Unlock 200+ growth playbooks
Filter, search, export full database
Premium Plus
All access pass: All courses & guides to start your business
$12.82 $5.75/week
Billed annually
Everything in Premium
$50K+ in deals on tools
Access to hundreds of successful founders
1 on 1 mentorship for your business
Get the Lean SEO course
Questions? Check out our FAQ