Daniel Ek is a renowned Swedish billionaire entrepreneur and also a technologist.

Daniel Ek is the co-founder and CEO of Spotify, Swedish audio streaming and media services provider.

He was awarded as the most powerful person in the music industry by Billboard. He also served as the CTO of the browser-based game and fashion community "Stardoll". Ek also started the company "Advertigo", An online advertising company which sold in 2006.

We've put together an incredible collection of Daniel Ek quotes to read. 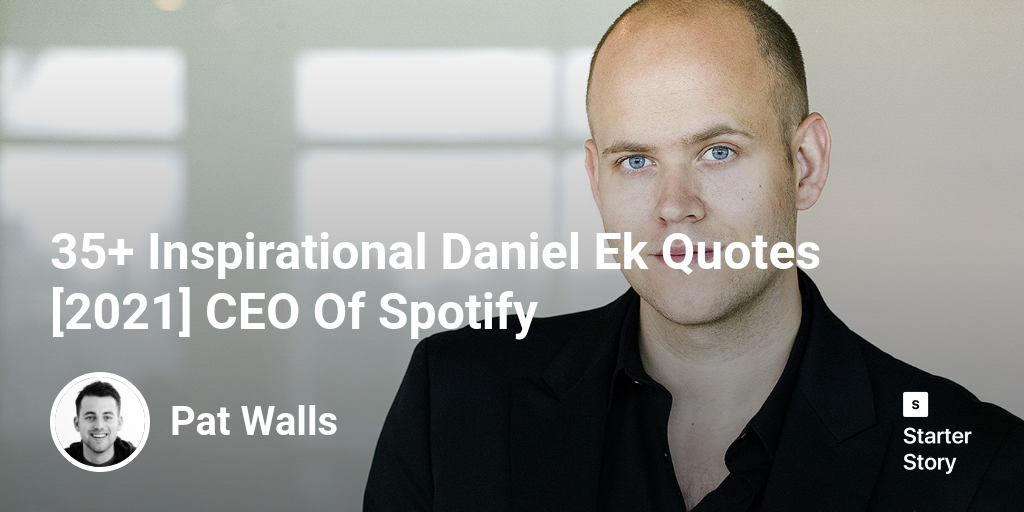 People just want to have access to all of the world's music.

I'm not saying you can't be successful in the music industry without Spotify. But when I look at the future of music, I don't think scarcity is the model anymore. We have to embrace ubiquity - that music is everywhere.

We really do believe that we can improve the world, one song at a time.

It disturbed me that the music industry had gone down the drain, even though people were listening to more music than ever and from a greater diversity of artists.

I'm not an inventor. I just want to make things better.

I was born in Sweden, and in Sweden we are known for the piracy services.

I had two passions growing up - one was music, one was technology. I tried to play in a band for a while, but I was never talented enough to make it. And I started companies. One day came along and I decided to combine the two - and there was Spotify.

There are half a billion people that listen to music online and the vast majority are doing so illegally. But if we bring those people over to the legal side and Spotify, what is going to happen is we are going to double the music industry and that will lead to more artists creating great new music.

Music isn't like news, where it's what happened five minutes ago or even 10 seconds ago that matters. With music, a song from the 1960s could be as relevant to someone today as the latest Ke$ha song.

This is a way for artists to communicate directly to their fans. If you think of an artist like Bruno Mars, he's using Spotify, creating playlists and listening to music through it.

With Spotify, people don't get it until they try it. Then they tell their friends.

At Spotify, we really want you to democratically win as a musician. We want you to win because your music is the best music.

I actually bought a travel guitar, and that guitar is really cool. You can actually fold the guitar, and you can plug headphones into it, but it's acoustic, or semi-acoustic.

At the end of the day, I want the music industry to be larger than what it is today.

In order for a service to be social, you've really got to start from the ground up. The fact that almost a third of the U.S. population have even heard of Spotify is really because they've seen it on Facebook and friends have been sharing.

There are millions of people who consume music illegally every month. Just getting them into a legal service will make the music industry way bigger than it's ever been before.

In general, people are comfortable sharing their music. There are two exceptions, though - Lady Gaga and Britney Spears.

The main reason people want to pay for Spotify is really portability. People are saying, 'I want to have my music with me.'

Put your consumers in focus, and listen to what they're actually saying, not what they tell you.

With Twitter and other social networking tools, you can get a lot of advice from great people. I learn more from Twitter than any survey or discussion with a big company.

If you look at Adele, the reason she did so well was she created great music. It wasn't about a clever marketing trick.

Buying sports cars, going to expensive nightclubs, spraying people with champagne and things like that - what I learnt is that it wasn't for me, and, in fact, I feel pretty empty after doing that.

I was the first real generation to have their teens on the Internet.

When I think about music in the future, I don't make a distinction between what's radio, what used to be the music library, and so on.

For me, as someone growing up in a working-class suburb in Stockholm, I couldn't afford all the music. So back in '98, '99, I was really thinking about how I could get all the music and do it in a legal way while at the same time compensating the artist.

It's hard to criticize someone who's hugely successful.

A playlist can be very versatile, almost like a programming language.

We are passionate about making it so that users enjoy the music that they want to enjoy but at the same time fairly compensates artists. That's not the same as saving the music industry.

I don't think we see ourselves as the savior of the music industry.

We kind of look at music as something very natural in people's lives. I mean, most of us can relate to music in some sort of shape and form, and if you think about it, most of us remember the first time we kissed someone, what kind of music was playing or the song that was playing on our friend's birthday.

No one wants to wait for tracks to buffer or spend hours searching through a Web site to find their favorite song.

But right now we have an advantage of being the number one in music.

We led with our conviction rather than rational, because rational said it was impossible.

The value of a company is the sum of the problems you solve.

How a food blog grew a niche audience to over 35,000 active subscribers
$50K+ in savings
Access to hundreds of the best tools to run your business. Including: $5,000 in AWS credits, $1000 Airtable credit, $1,000 in Notion credits, $1,000 in Miro credits, $10K in transactions without Stripe fees, 12 months free on SendGrid, 6 months free on Zendesk, Typeform, 50% off Quickbooks, Hotjar, Algolia, and hundreds of other tools.
2K+
case studies
146K
subscribed
1K+
hours of content
8M
visitors

"Thank you for creating this. It's refreshing to see how real founders grow their business."
Enter your email to get started.
To read this exclusive story, join Starter Story Premium!
Premium
Full access to case studies, filters, and business ideas database
$6.20 $2.67/week
Billed annually
Unlimited access
Unlock 2,326+ case studies
Find your next idea - 6,461 business ideas
Unlock 200+ growth playbooks
Filter, search, export full database
Premium Plus
All access pass: All courses & guides to start your business
$12.82 $5.75/week
Billed annually
Everything in Premium
$50K+ in deals on tools
Access to hundreds of successful founders
1 on 1 mentorship for your business
Get the Lean SEO course
Questions? Check out our FAQ. Already a member? Sign in