My name is Dan Louche and I founded Tiny Home Builders in 2009. We specialize in providing resources, including books, videos, workshops, consulting, and custom trailers to people looking to build their own tiny house.

For those not looking to do it themselves or looking for a little help, we also build custom house shells as well as completed homes. 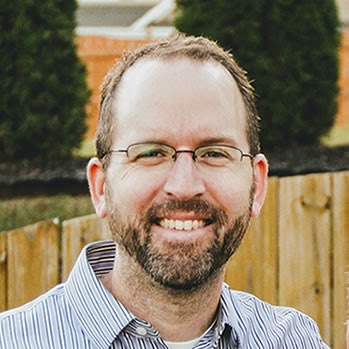 In August 2009 I received an unsettling call from my mother. The poorly constructed trailer home she was living in was beginning to deteriorate around her. Water lines had been leaking for some time and mold was growing rampant. Living under these conditions was causing her health to deteriorate, but neither she nor I had the money to purchase a conventional house or even a new trailer home. So I started researching our options. I had always been interested in smaller homes, but up until this point, I had no idea there was an entire movement around tiny living. Once I discovered it, I was hooked. I began building my mother a tiny house of her own in September 2009. 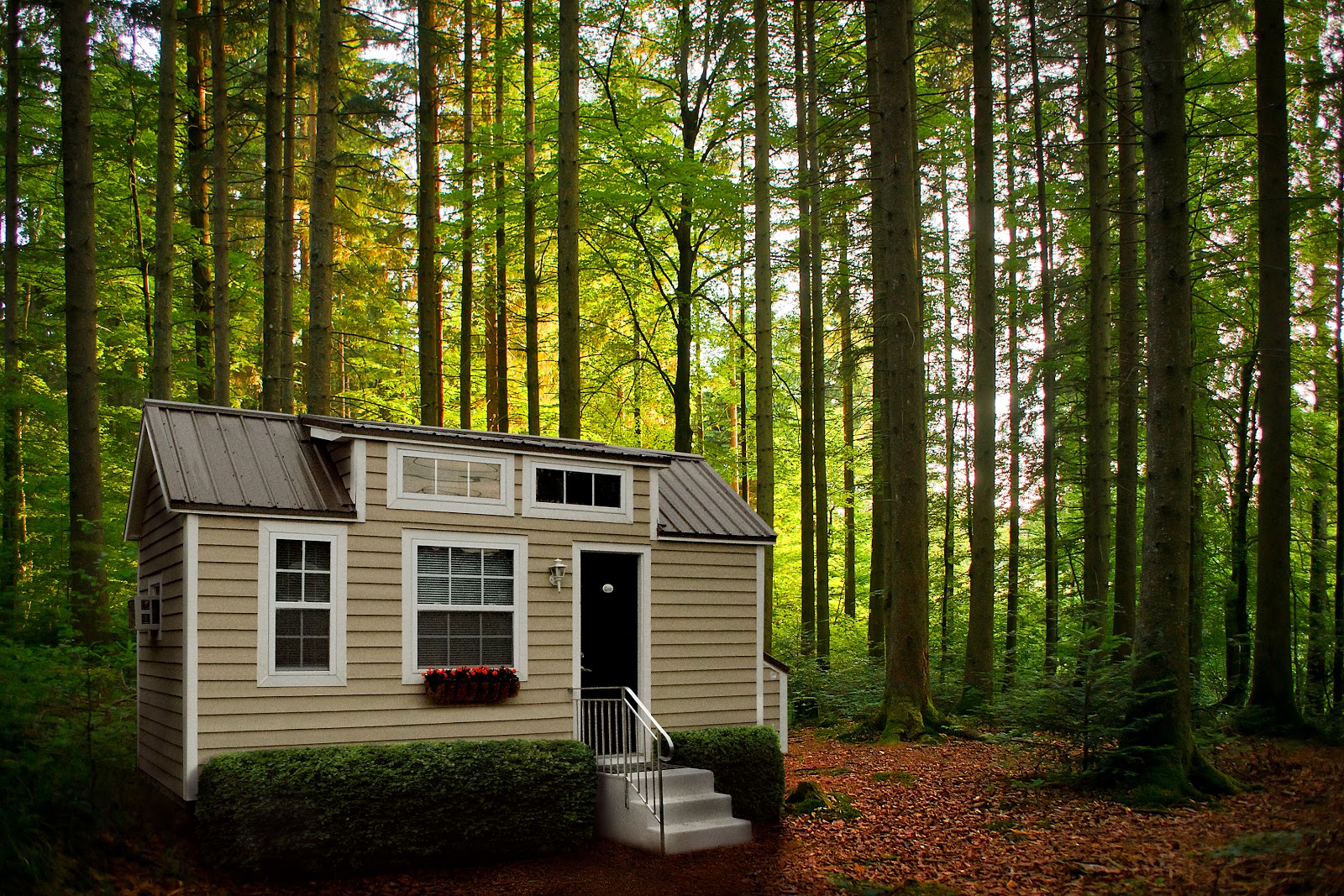 After the house was complete and my mother had moved in, I was amazed by the level of joy that it brought her. Her excitement was contagious as others who had previously been skeptical of tiny living were now genuinely considering the possibility of living in a tiny house themselves. Even my wife, who had likely thought I was crazy as I built a house in our driveway, was inspired by my mom’s joy at having a safe place of her own. When I saw this reaction, I knew that I wanted to help others experience a similar level of happiness and independence. I founded Tiny Home Builders and have been sharing my knowledge of tiny houses ever since. 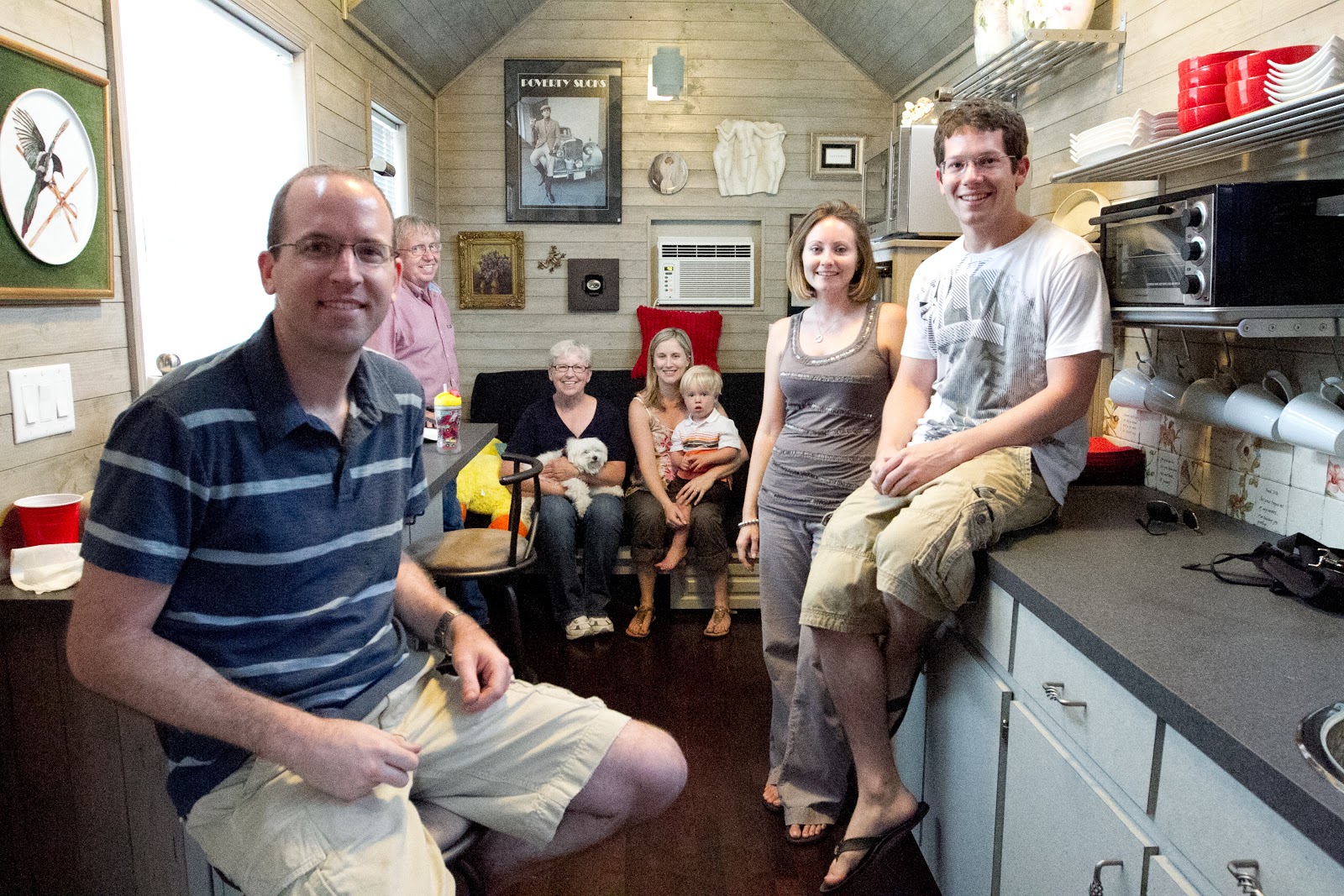 The first product I launched was the plans for the initial house that I built. This was the most challenging product I’ve ever created since I was both inexperienced with house construction (I made a lot of mistakes on that initial build) as well as the tools to design the plans, specifically Trimble SketchUp and Layout. I remember working on the plans each night before going to bed for several weeks on end. But I was driven to produce the plans not out of a desire to sell them, but instead out of the necessity to have them for my mom’s house.

I run a small company and for years on end there hasn’t been a day that I sit down and I don’t have something to do.

When I eventually started selling the plans I started fielding a lot of questions about construction from my customers. After all, these were all people like me, most with almost no construction knowledge, who was now talking about this giant task. I decided rather than answer these questions over and over I started putting them into a document that I would then include with the plans. Over several months this document began to grow and grow and ultimately turned into my book which I have sold over 30,000 copies of. 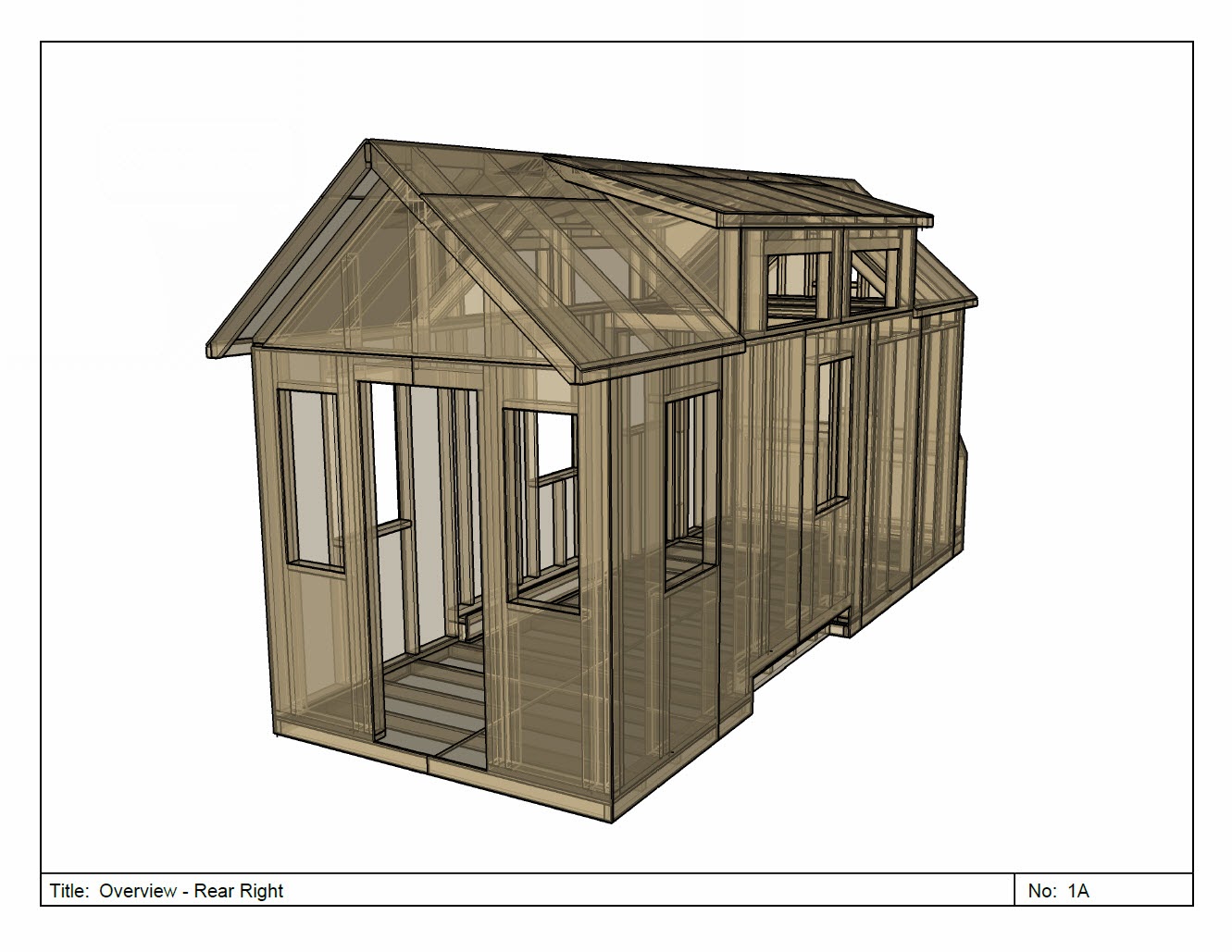 After producing and marketing the initial set of plans, each subsequent set became significantly easier to make since you can leverage the previous sets of files and documentation. I recently produced a new set of plans in about 6 hours, compared to the hundreds of hours of the initial set.

When I started building my mom’s house I decided very early on to start a blog so that I could share my experience with anyone else wanting to do the same thing. SO each day that I would work I would create a small blog post to show my progress and explain any mistakes that I made along the way. Since there were so few people building tiny houses at this time I quickly developed a small following. I found this to be surprisingly motivational since these readers provided some form of accountability. After all, if I didn’t make any progress they would know. Even saying it now it is weird to think that knowing strangers are following you would make you work harder. For this reason, I tell everyone who is starting down this journey to start a blog. 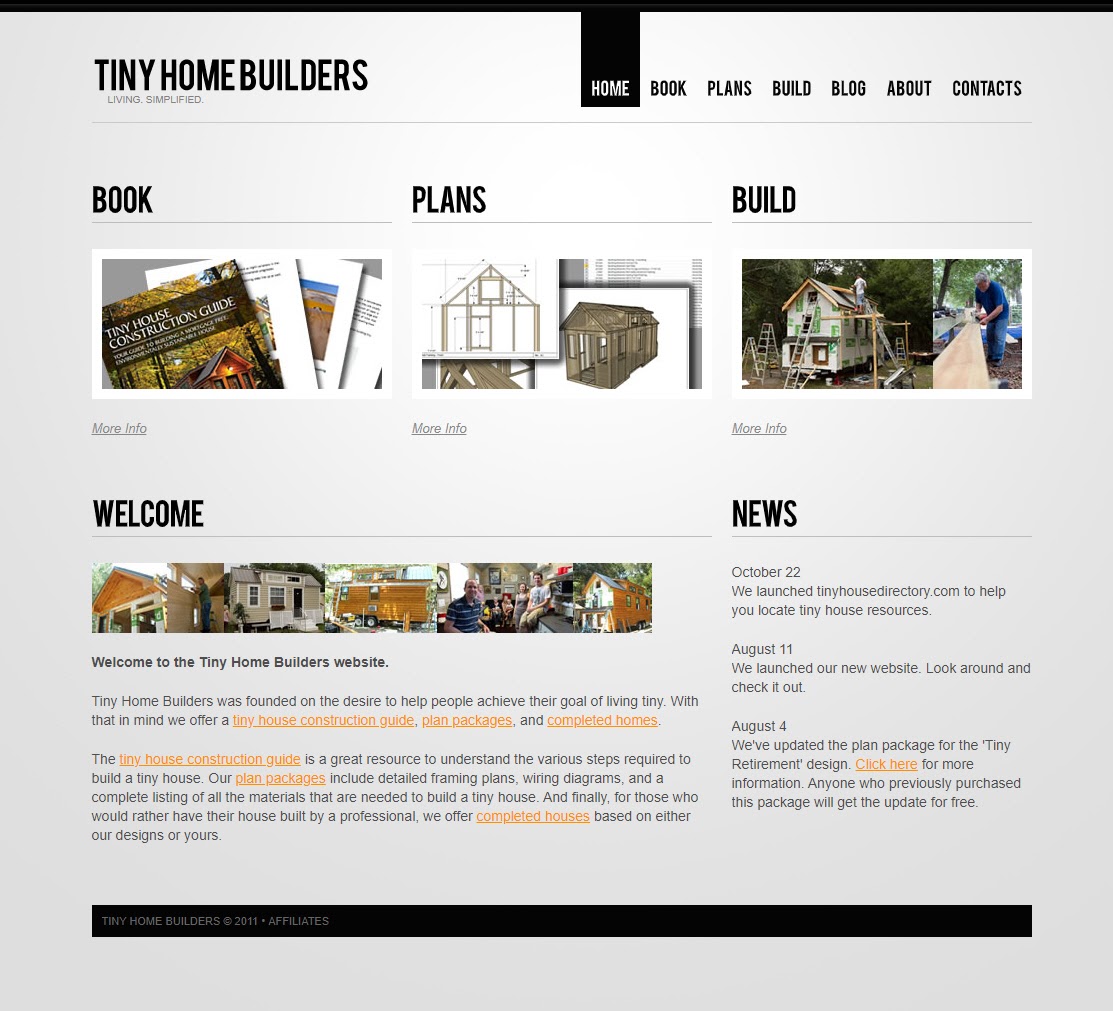 Since I had a WordPress blog with an audience already, my conversion to eCommerce was very straightforward. I simply uploaded my products to an external shopping cart provider (I started with eJunkie, and now use getDPD) and plugged it into WordPress. Since then we’ve moved away from WordPress to a custom site but still, use getDPD for this functionality.

Our primary method of attracting customers has been to give away most of our information for free. In the early days, I spent the majority of my time writing extensive articles on every topic related to tiny houses. I’ve also spent a considerable amount of time researching Search Engine Optimization (SEO) to ensure I am writing articles that people are searching for and that those articles are optimized to be indexed by the search engines. This effort has paid off by allowing us to typically have over 6000 unique visitors per day. 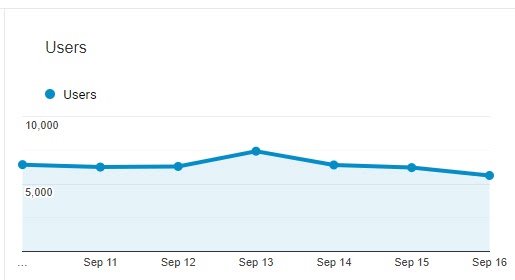 In addition to marketing the products we offer to our users, we also serve ads on specific parts of our website which generate approximately $4500/month.

We also have a newsletter with over 30K subscribers. This is not as useful to us since most of our products don’t turn over. Unlike a clothing retailer, we essentially have the same products year after year. The one exception to this is our workshops. Each year we conduct six tiny house workshops in various parts of the country, and our newsletter is effective in getting attendees to sign up.

In the past, we have experimented with social media campaigns and google ads. But for use, they have not had a respectable ROI.

Interest in tiny houses has grown consistently over the last 10 years. There was a considerable spike when the tv show Tiny House Nation came out.

I imagine at some point the novelty of tiny houses will wane, however, there will always be interest in affordable housing.

The following list of tools is what we have found the most useful for us;

Start simple and soon. I hear from a lot of people starting where they are trying to get everything just right before launching. But business is never done.

I run a small company and for years on end there hasn’t been a day that I sit down and I don’t have something to do. Not only that, nothing about my company looks the same as when I started. So just get started! 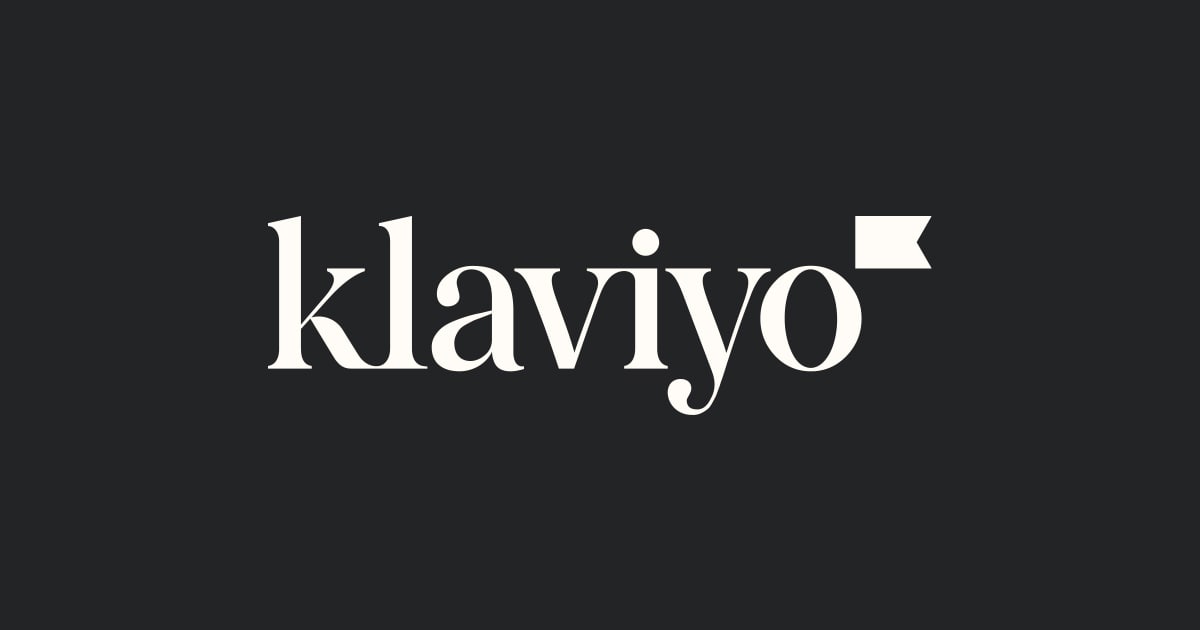 Use Klaviyo to turn hard-earned customer data into hard-working emails and texts.

Try the platform that 265,000 brands use to grow their business.

...show you exactly how they built a business to thousands of customers.

That’s why we built Starter Story - the only place where 3,159 founders of successful businesses share with you their exact timeline of building their business to thousands of customers.

The community of DOERS

^ Yes, we asked 3,159 founders these questions. And we are asking more every day.

Industries, markets, and trends - you’ll get access to the world’s biggest, living, breathing database of 7,317 business ideas, side projects, and products to sell.

Based on data points from our 3,159 case studies, you'll find the 201 most effective ways that founders are growing their business right now.

At Starter Story, our goal is to help you make these decisions by giving you the information and answers you need - from 3,159 successful founders that already went through it firsthand.

Use Klaviyo to turn hard-earned customer data into hard-working emails and texts.

Try the platform that 265,000 brands use to grow their business.