Hey there! I’m Stefan, the Founder @ Martian. I recently launched a course called Mini Startups. It teaches you how to build “mini” tech companies from scratch. Interesting fact: sold over $1,000 (11 pre-orders) before I even started.

What’s my backstory? Where do I start? :)

Growing up, I was always an oddball. Sometimes I was quiet, other times inquisitive, but often I was just weird. I was passionate about one thing: outer space. After starring in an elementary school mockumentary that got published by NASA, I decided that I never wanted to give up on my dream of becoming an astronaut. So, I became a biochemist/pilot in college and then graduated to work at NASA as an Analyst.

I was originally planning to become an aerospace medicine physician, or space doctor, at NASA. However, I quickly realized just how difficult it was to become an astronaut through the ASCAN Corps (the acceptance rate is extremely low). Thus, after just a few months of working at NASA and dropping out of medical school, I decided to start my own enterprise, Martian.

The goal of this company? To self-fund my way to fly in space. I figured the probability was higher if I either a) made enough money to pay for a ticket, or b) started my own space company.

Martian was initially an app company. We built iOS/Android apps. The apps I built ended up getting the attention of Apple, which landed me a contract position with them in Austin, Texas. However, after only 2 months and a few days of working there, I was fired. Why? Well, I attempted to start a top-secret “SkunkWorks” experimental R&D division within Apple, kinda like Google[x] or Lab126 at Amazon. Without getting into details, let’s just say my boss was not pleased with me commandeering her employees. Got fired within 24 hours. Oh well. I’m glad I was fired, because I couldn’t build apps or work on other projects there, anyway.

Some of the notable projects we’ve worked on at Martian include a symptom tracker for chronically ill patients, a wristwatch prototype that doubles as a blood pressure monitor, a smart hoodie made out of recycled plastic bottles, and even the world’s simplest meditation app.

As we started working on more projects, and by we I mean me and friends/contractors, I decided it was time to turn Martian into a holding company… Kinda like Richard Branson’s Virgin Company. If I had any shot at going to Mars, it’s because we’ve tried and failed 1000’s of times with 100’s of companies. Maybe one day... a Martian Rocket Company?

At its core, Martian is a reminder. A reminder that you are unique in your own way. Maybe you’re from Mars. Maybe you’re from a different galaxy. Whatever it is that makes you different, it’s important to realize that it’s OK to be who you are. And do it unapologetically. The people who change the world are seldom rule-followers. They tend to bend/challenge the status quo in some way. Martian’s mission is to empower the world and do the impossible.

Wait, hold up. How do Mini Startups fit into all of this? Why “Mini”? Mini because everything starts off small. As much as I love working on grand challenges, what I’ve realized over the last 5 years is that you have to start off small to go BIG. Mini baby steps, if you will.

Mini Startups is an online community that helps you build your first, second, or 15th tech company. A mini tech company. A company that doesn’t require a $500k seed round or a technical co-founder. We have noobies all the way up to seasoned veterans in our Slack channel.

The Mini Startups online course is divided into 4 modules: Design, Business, Legal, and Growth Hacking (Marketing). No coding is necessary, because I never learned how to do it.

The long term goal of Mini Startups is to help other people launch their companies, and in exchange, founders reward me with equity as an angel investor/advisor. I love this strategy because it’s a positive sum-game. We both win. As I help new entrepreneurs get started/scale, Mini Startups gets rewarded on the back-end.

It all started with one message. I reached out to a friend, asking him if he’d be interested in my course. I said: “I’m thinking about launching a new course: How to Build Mini Startups” This was April 20. 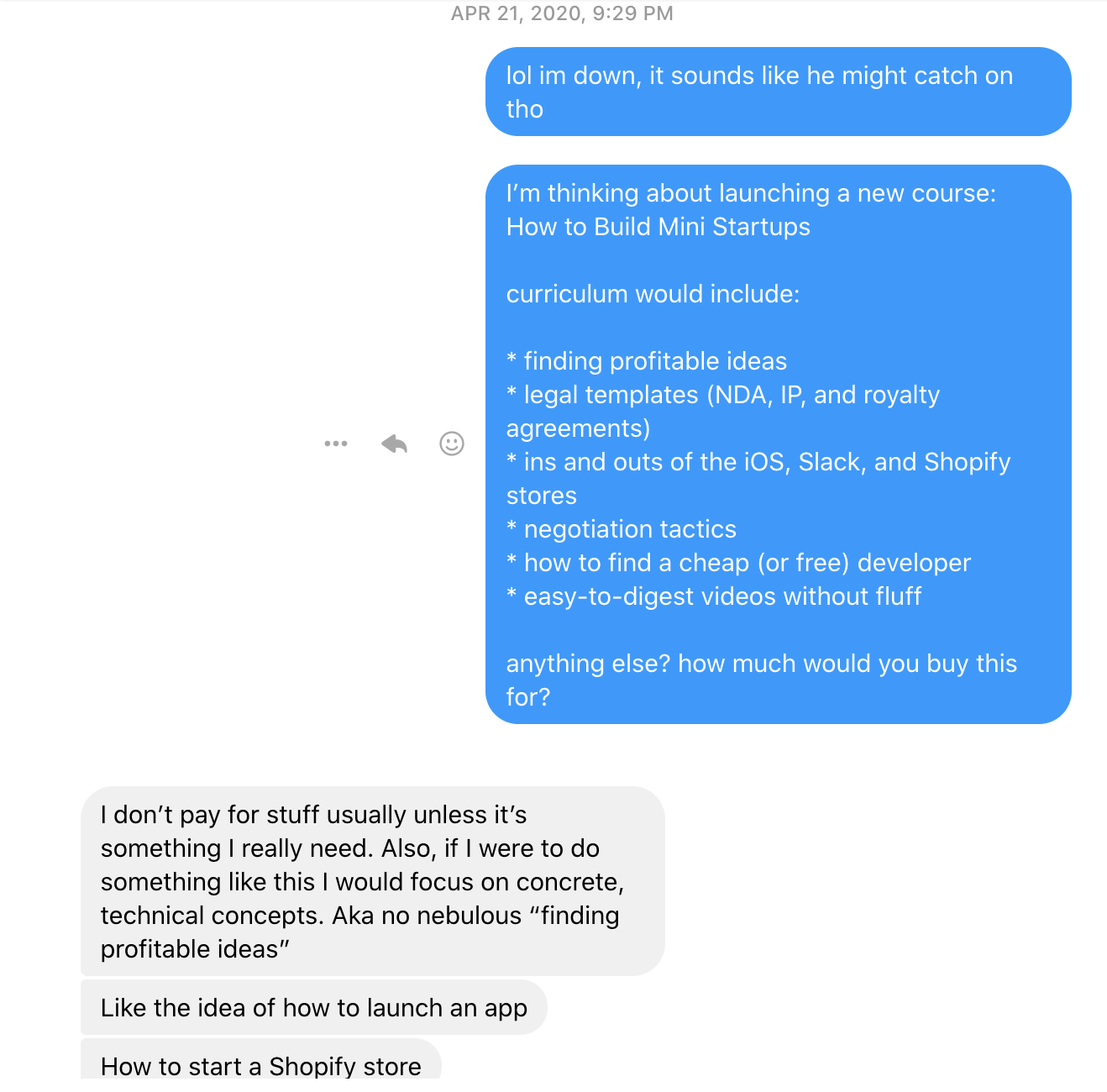 He said he liked the idea (which usually happens with friends). One day later, I decided to make a pamphlet on Canva.

The theme of the pamphlet was green, like money, because the goal of the course is to get you to build a profitable app (making $100/day).

Instead of asking him “would you use this course”? I asked my friend how the pamphlet made him feel. He said “I like it a lot. Specifically that you aren’t advertising making millions.”

I’m not a fan of get-rich-quick schemes either, so it was refreshing to hear that from him. 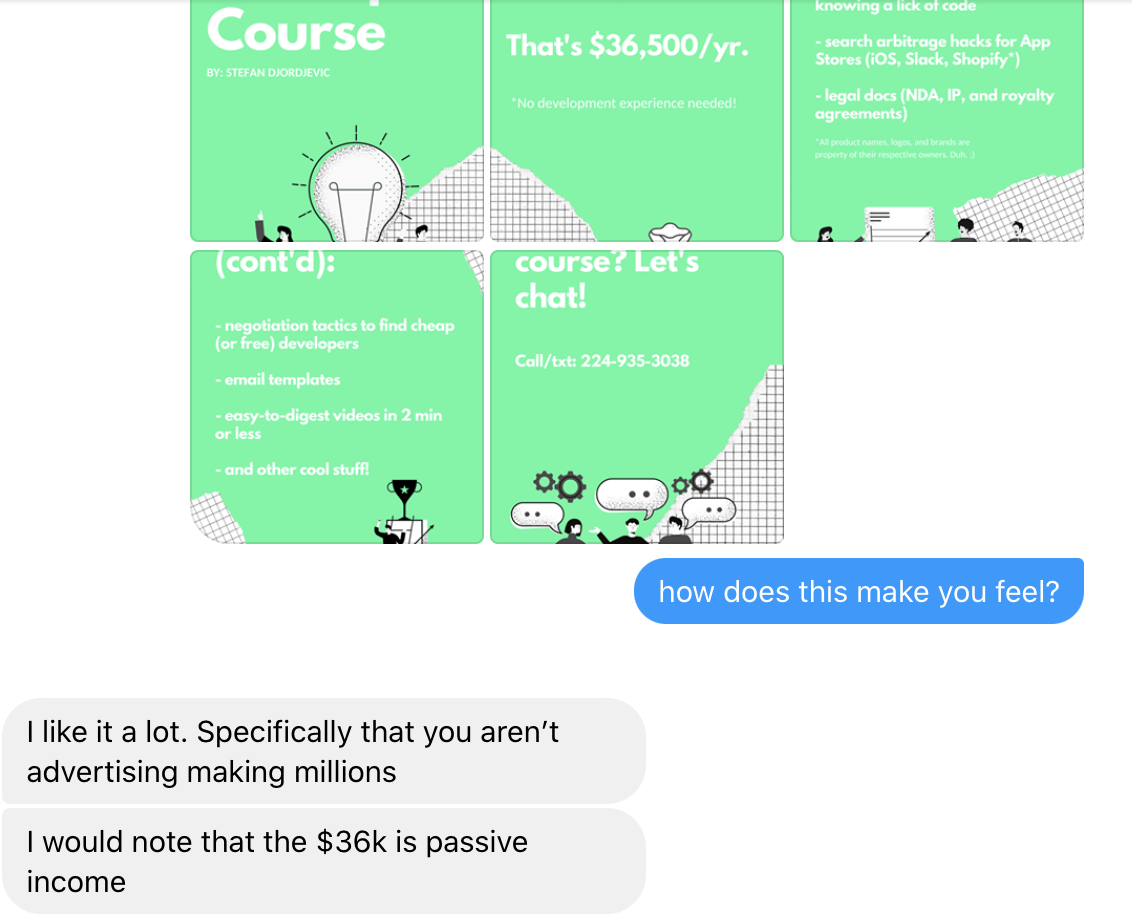 I decided that I wanted to see $$ money in the bank before I started making the course. This would validate my idea even more. I didn’t want to waste time if nobody would buy it.

So, I reached out to more people. (People won’t just buy your course. It takes time.)

The sales cycle was ~ 1 week from engagement to close.

How did I reach out to people? Literally everywhere I could 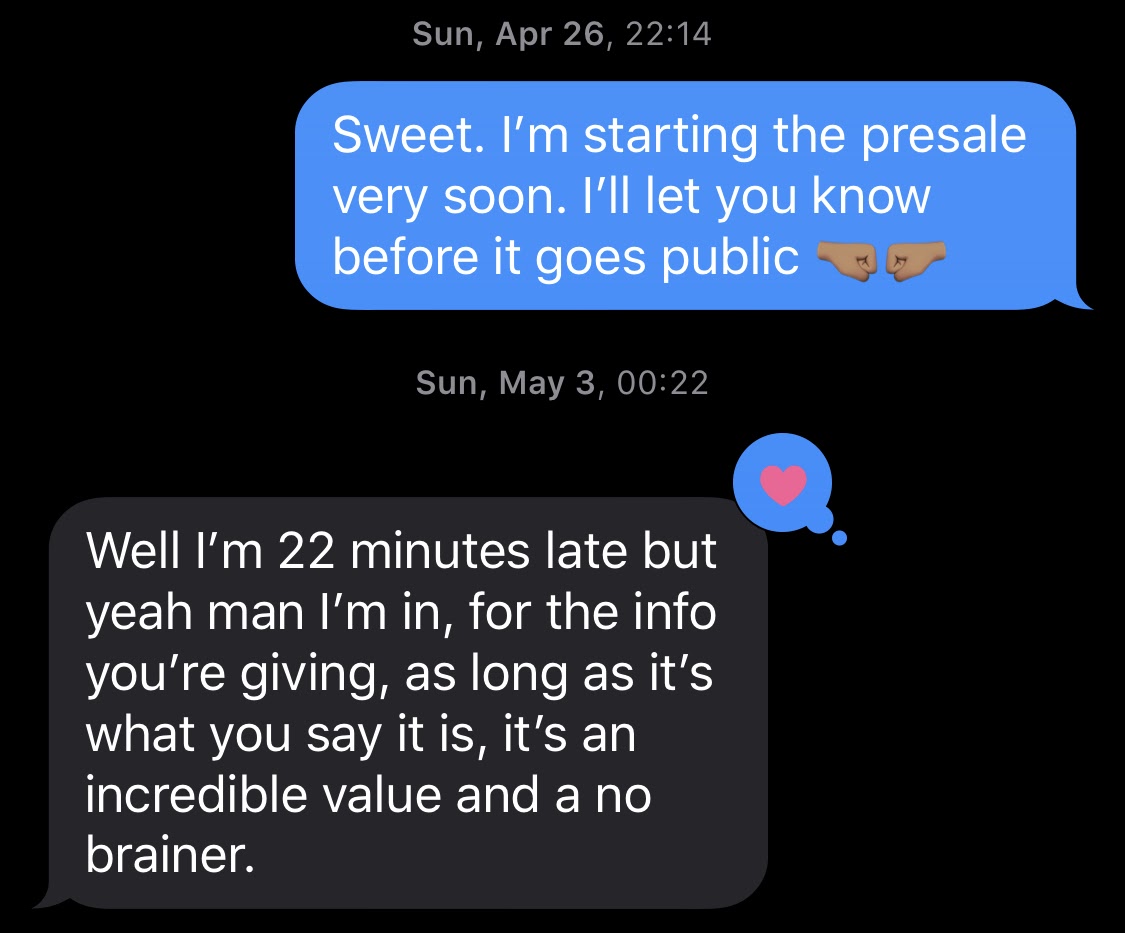 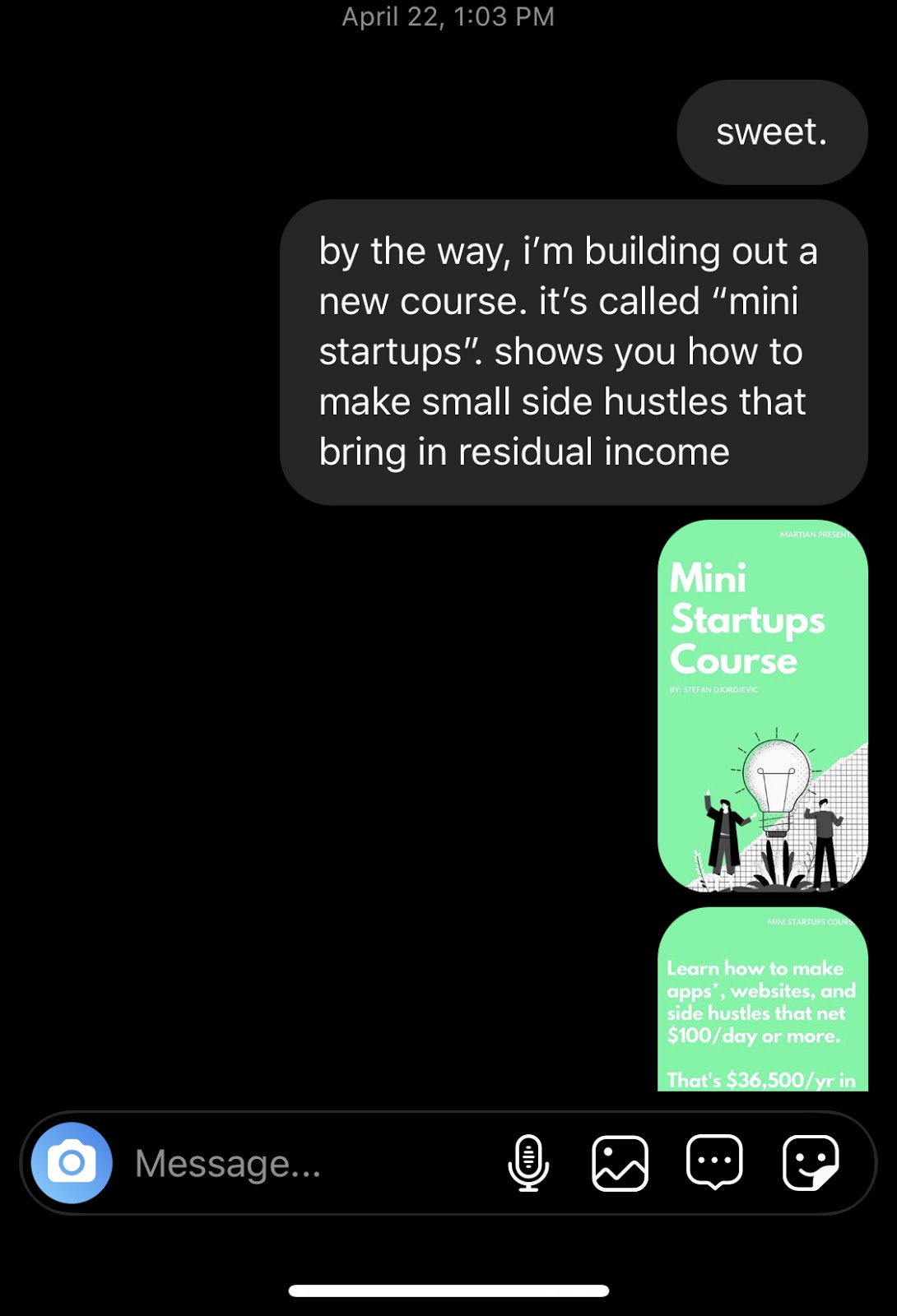 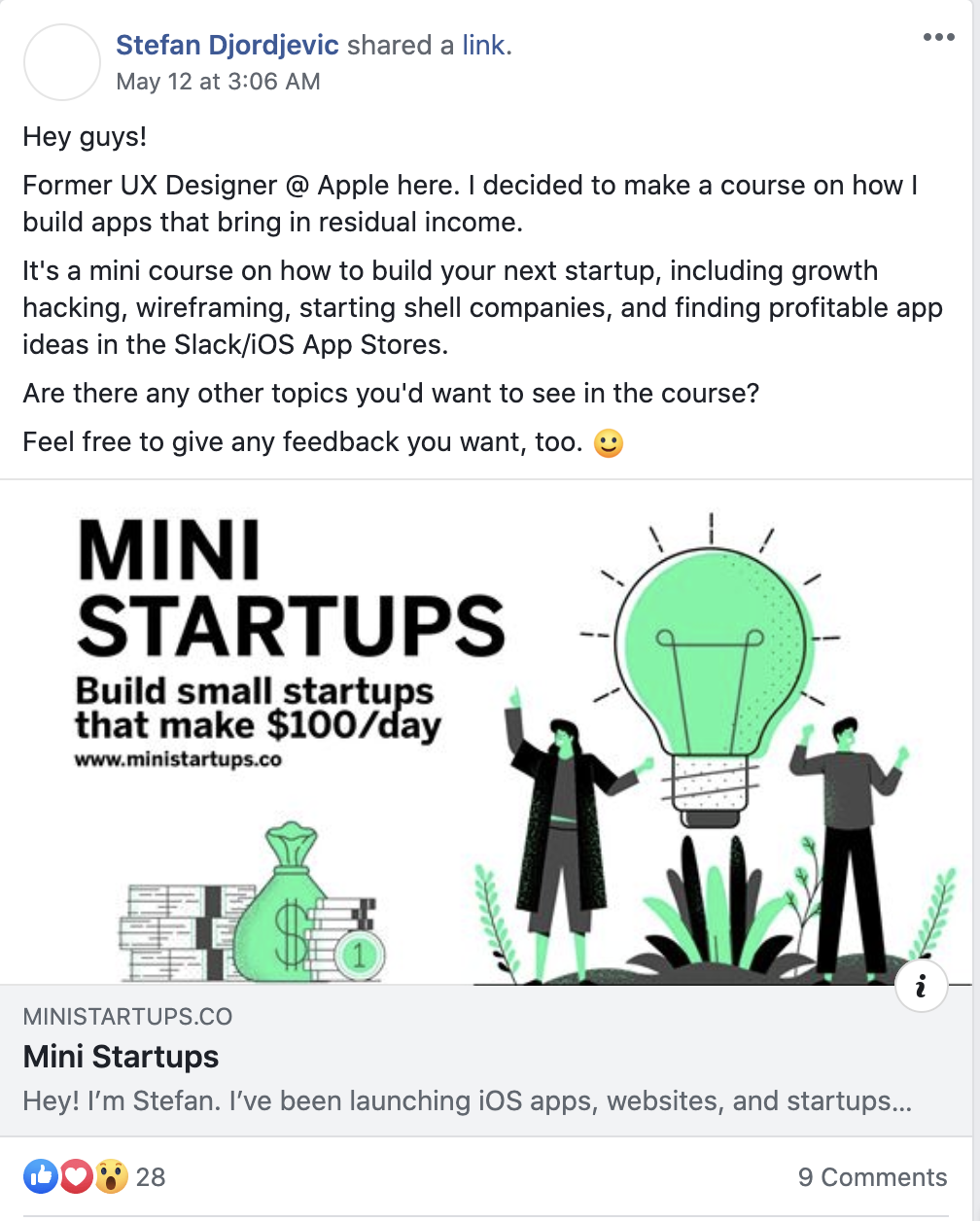 You get the idea.

Next, I built a landing page on Podia. What’s interesting about Podia is that for every person I refer to, I also get a 30% commission. An amazing referral program. 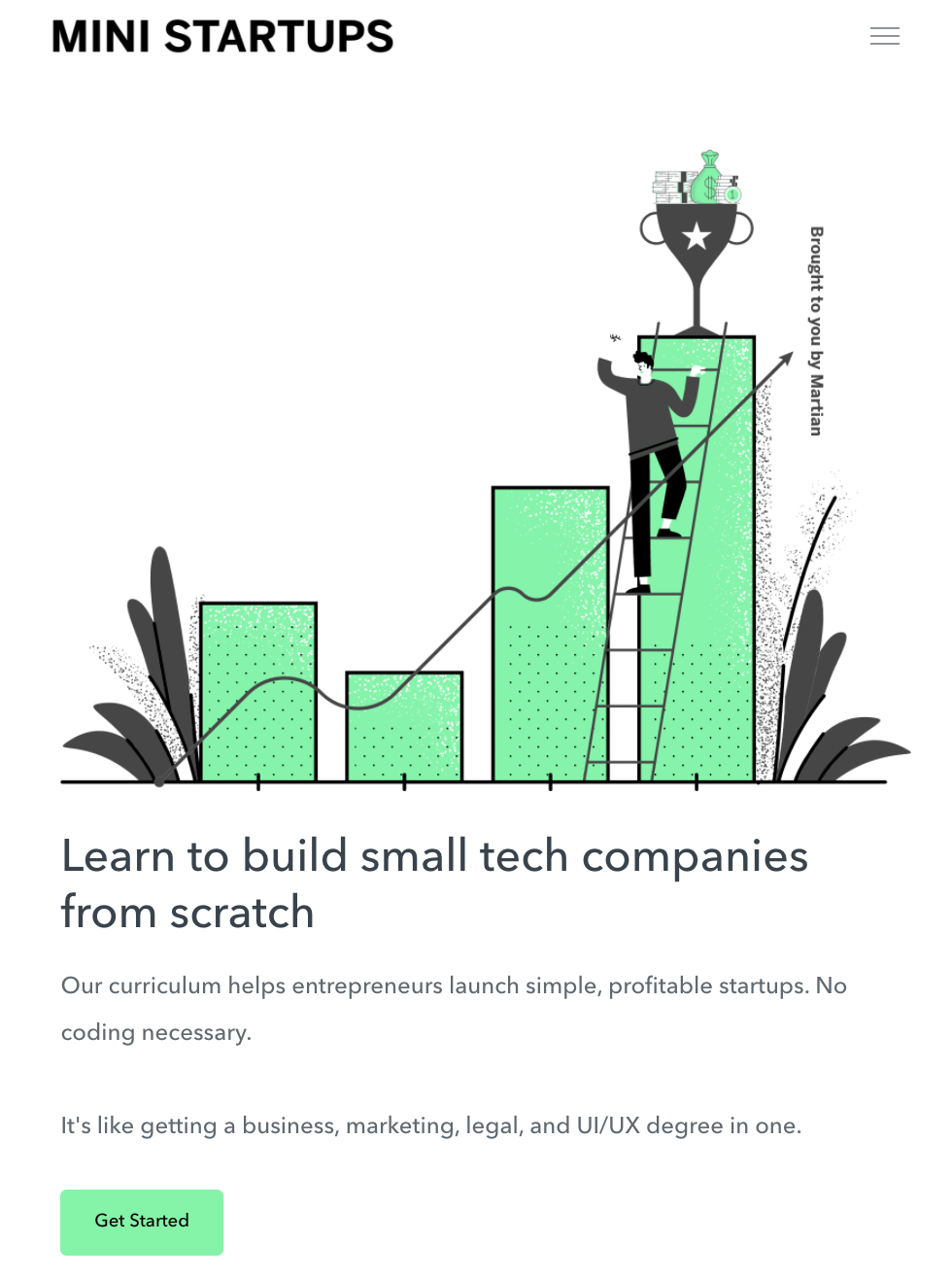 So over the course of about 1 month, from guerrilla marketing on Reddit, asking friends/family, posting in FB groups, etc…… I had 11 pre-sales.

I then proceeded to make an excel spreadsheet of the feedback I received. This would serve as a template for the course.

I wanted to make a video for launch. A sexy one. Similar to the Dollar Shave Club commercial, or the Harmon Brothers. Deadpan humor, if you will.

I had a friend from acting class come in and help me film. He brought his Blackmagic pocket camera. I rented a Rode microphone from a local camera store.

The video was filmed at a local startup incubator in Austin, Texas. 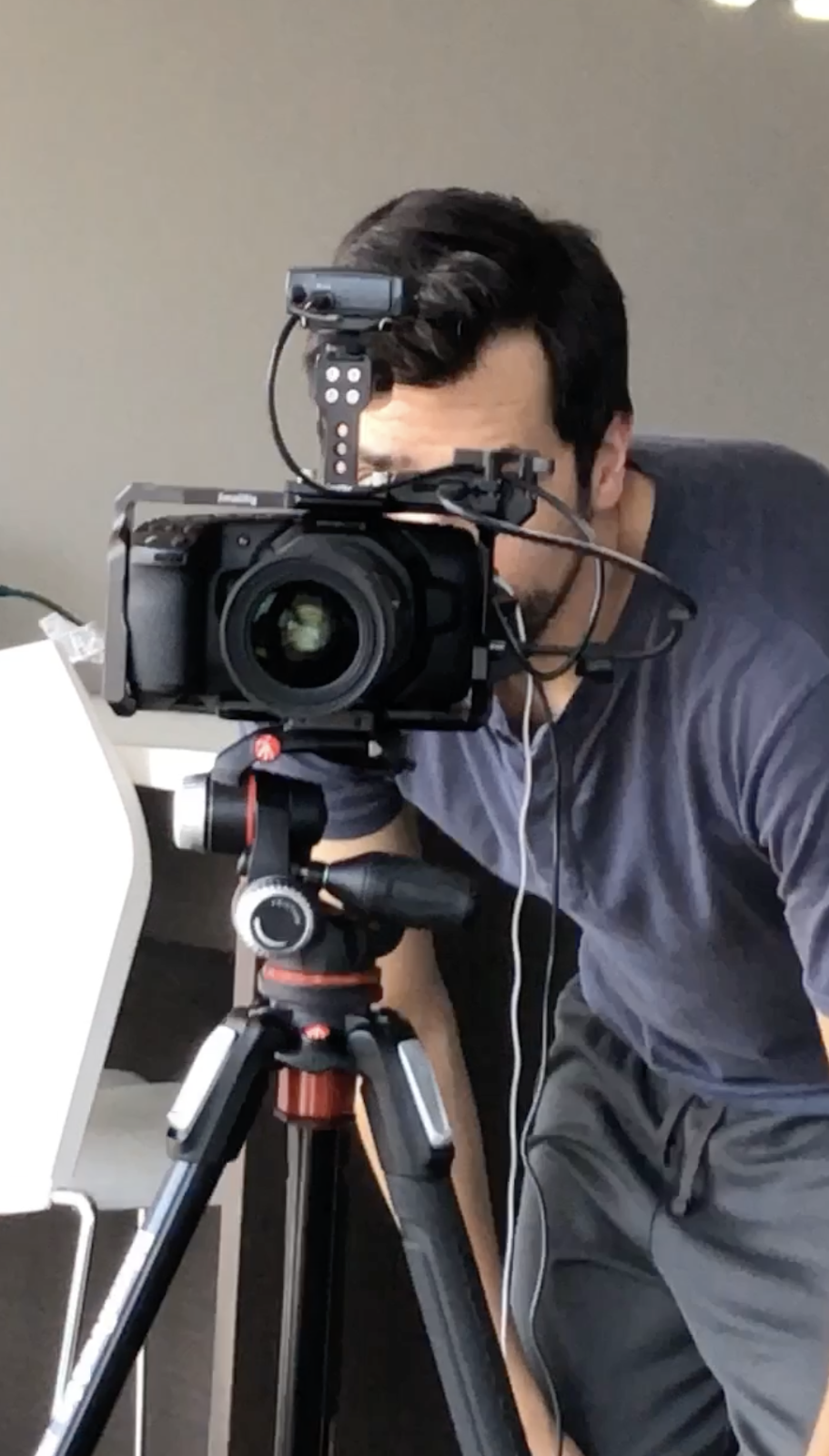 I ended up launching the course on May 20 at 6:30p CST. The course launched with 11 pre-orders. 9 friends, 2 organic. The business didn’t require much overhead, maybe $100. $20 for the domain, ~$85 for Podia’s fees. The undisclosed amount for the cameraman (thanks Shane Ramirez!)

The look and feel I wanted for the website was fun, modern monopoly, minty green, startups, and interesting. 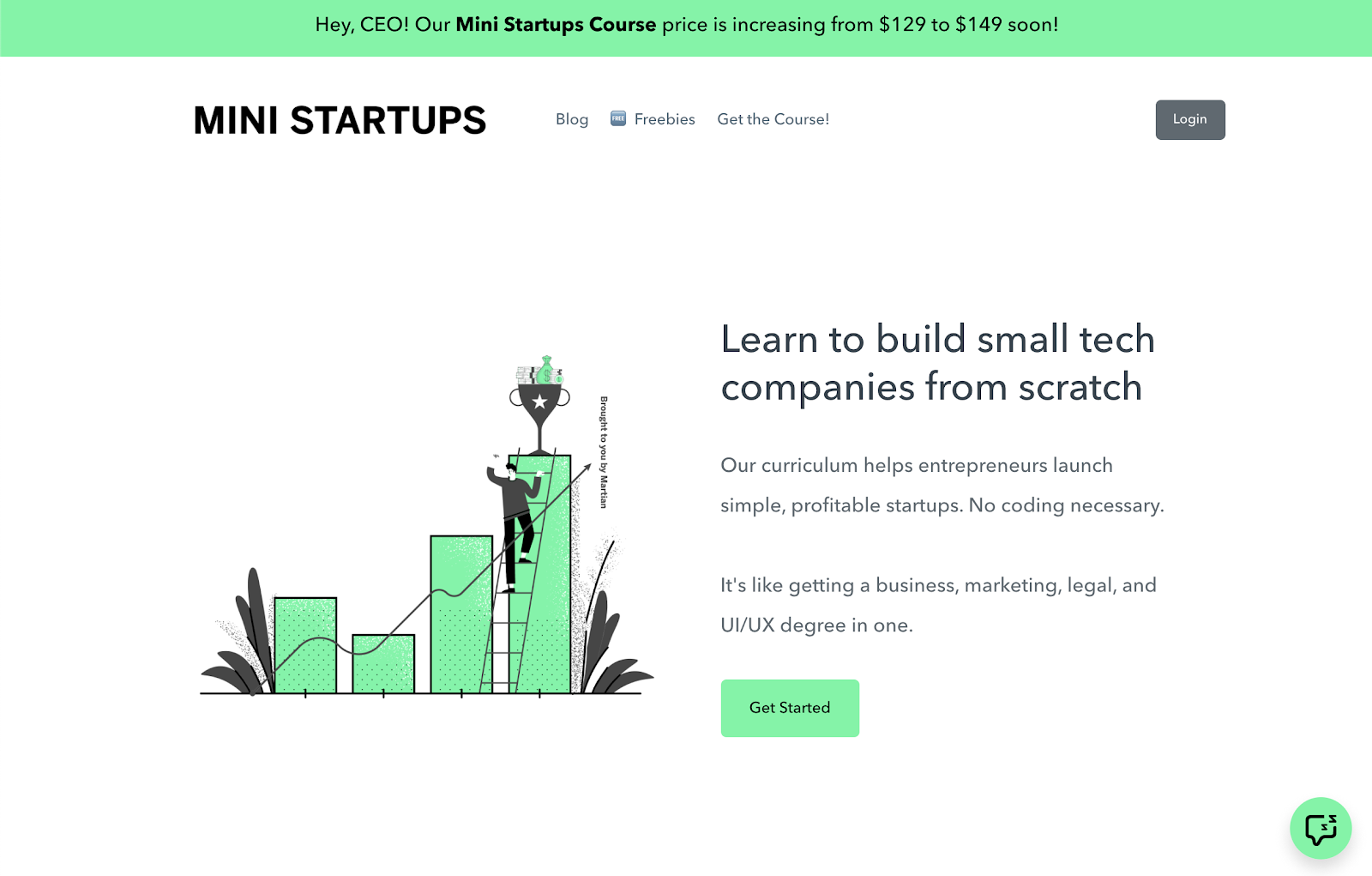 Seriously. Start selling your idea, blog, whatever… NOW. It took me 5 years to learn this. There’s no need to build something that won’t work.

I’m only 3 days into course creation, but some of the things I plan to do:

Disclaimer: yes, I had some leverage because I had a following and also a track record for building apps in the past. I think it would be much more difficult if I hadn’t done it 10+ times before.

I leveraged my existing friend group to get started.

Podia for the course. I did a write-up about why I chose Podia here.

Google Domains for the domain.

IncFile to form your company.

Seriously. Start selling your idea, blog, whatever… NOW. It took me 5 years to learn this. There’s no need to build something that won’t work. You justify creating the product by selling it to people and having $ in the bank.

Money in the bank is a great motivator.