Hey! My name is Rich Clominson and I am the co-founder of Failory.

Failory is a community where failed startup owners come to tell their failure stories and the mistakes they committed, so that future entrepreneurs can learn from them and not make the same errors. Quite similar to Starter Story, but instead of success stories, we talk about the failed ones.

Until now, we haven’t made any money from Failory. But we are looking to do it in a near future. Our plans to monetize our project is with sponsorships and affiliate marketing on our email newsletter. But before starting doing this, we are trying to increase the community, launch new interviews and get more email subscribers. 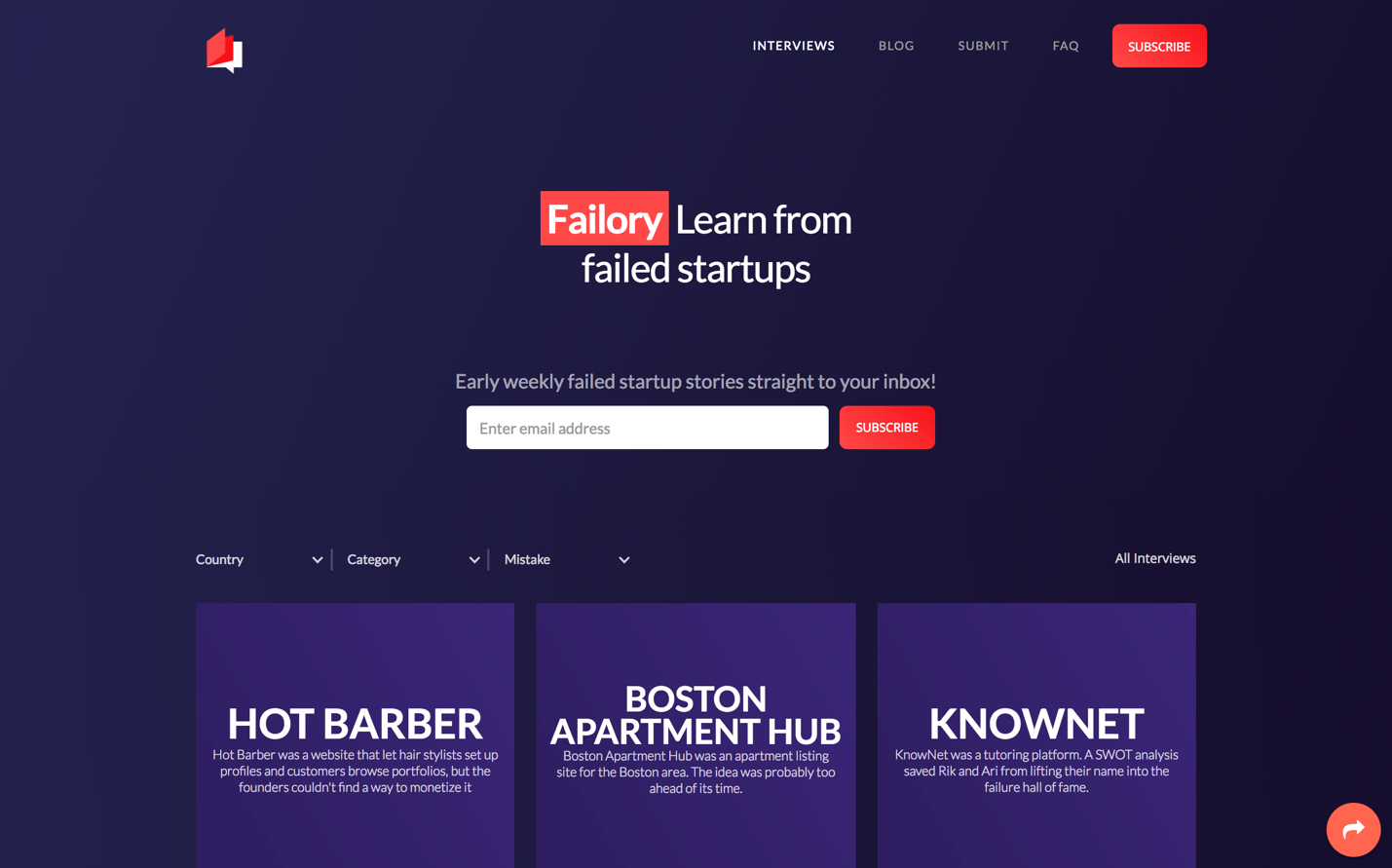 I studied Marketing in Argentina and over the years I decided to focus on Digital Marketing. That’s exactly what I do on Failory. My two co-founders have different tasks: one is specialized in web development, and the other in design.

Apart from Failory, I work at a marketing agency. My co-founders also have full-time jobs, which is slowing us down a little bit.

The story behind the creation of Failory is completely ironic:

With my 2 co-founders, we have attempted to build many side-projects with little or no success. Tired of failing over and over again, we had the idea of teaching other people how to succeed with their startups through interviews with failed entrepreneurs. Some might say that we are not the right people to help entrepreneurs, but I think the opposite. In fact, I think we were the chosen ones, as we are specialists of failure.

When our last startup failed, we started kicking around the idea of creating a website that would collect stories of failed startups reflecting about the mistakes they committed. After a competition analysis, we discovered that there was a couple of websites that talked about failed startups, but none who interviewed the owners of those startups. So, inspired by Indie Hackers, we decided we could do this.

Describe the process of building the initial version of Failory.

The process of building Failory started with the analysis of competition and validation of the idea. I have to confess we didn’t analyze the idea too deeply. We just decided to start it as a thesis and try it out. We started quickly and didn't really look back.

We moved into the naming process and business plan election. After a big brainstorming of possible names, we chose Failory. It surged from the combination of “failure” and “story”. The business plan was simple but we had many doubts about the monetizing strategy. After analyzing our competition, we found that the best way to earn money from Failory was with advertisements and sponsorships.

After a few days, we began designing and developing Failory. The design was pretty basic. Again, inspired by Indie Hackers, we made a website design similar to it. It only took us a few hours, and we rapidly moved into the development part. We built the product with Webflow, a tool I totally recommend. Instead of spending lots of hours writing code, Webflow allowed us to create it visually with some easy-to-use tools. This part took us only a few days.

But, how did we get the interviews?

Collecting the interviews was the hardest part. To get the first ones, we sent some cold-emails to people who have published online articles talking about their failed startup, and some emails to entrepreneurs, asking if they had any failed startups in their past. After much emailing back and forth, we found nine people who committed to interviewing with us. Some of our cold email responses were really enthusiastic to talk about their failed startup, but others didn’t trust us, as the website wasn’t published yet. Furthermore, the quality of the first interviews wasn’t so high as the ones we are publishing now.

Finally, while we waited to our interviewees to complete the questions, we began writing the blog articles, in which we tried to help people who are starting with their startups.

A thing that I would do if I had the chance of starting Failory again is to create hype about our project. We launched it too quickly, with almost no feedback or supporters.

How have you grown Failory?

The launch of Failory included: 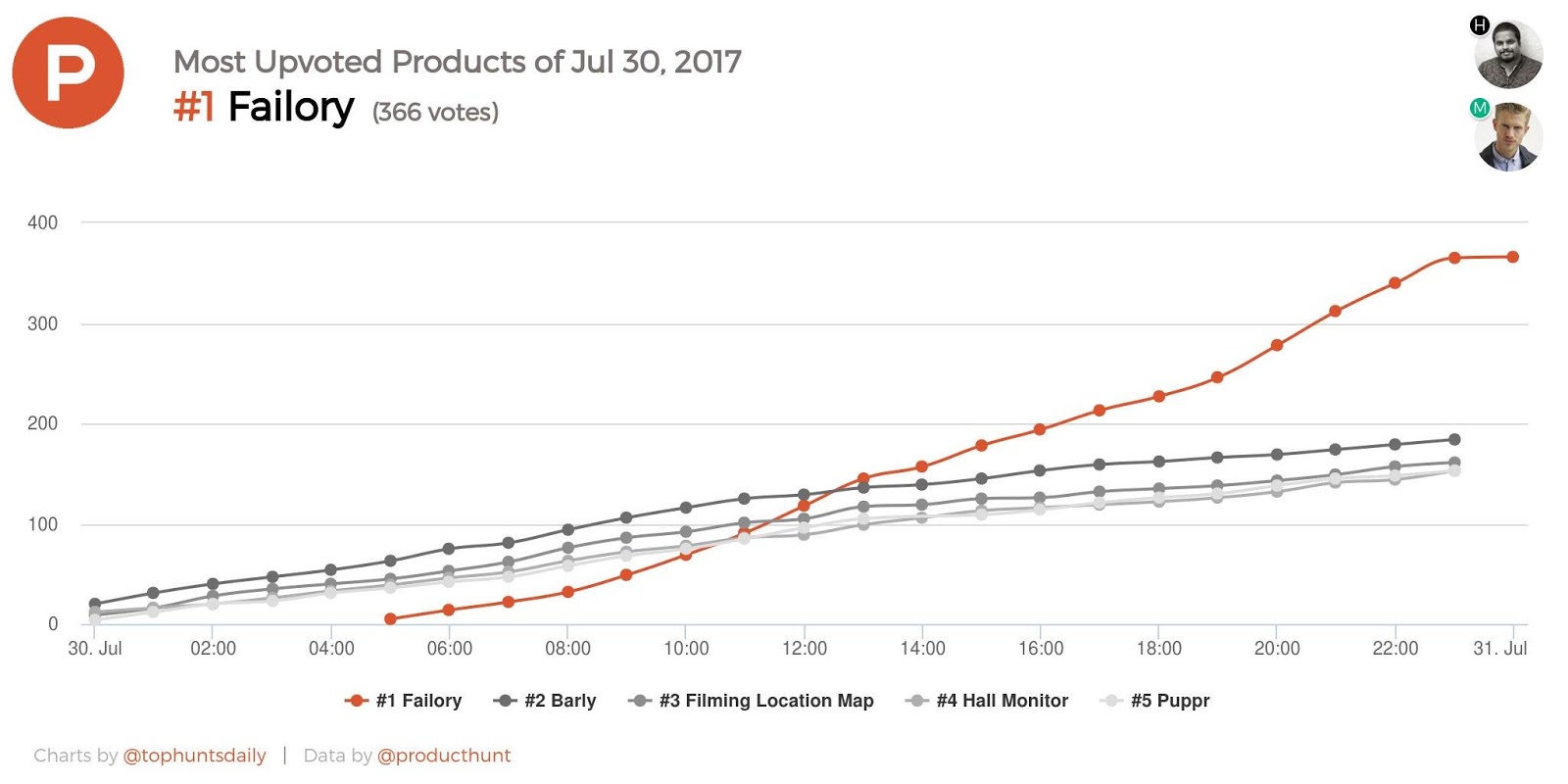 This was the Google Analytics for the first 3 days of Failory: 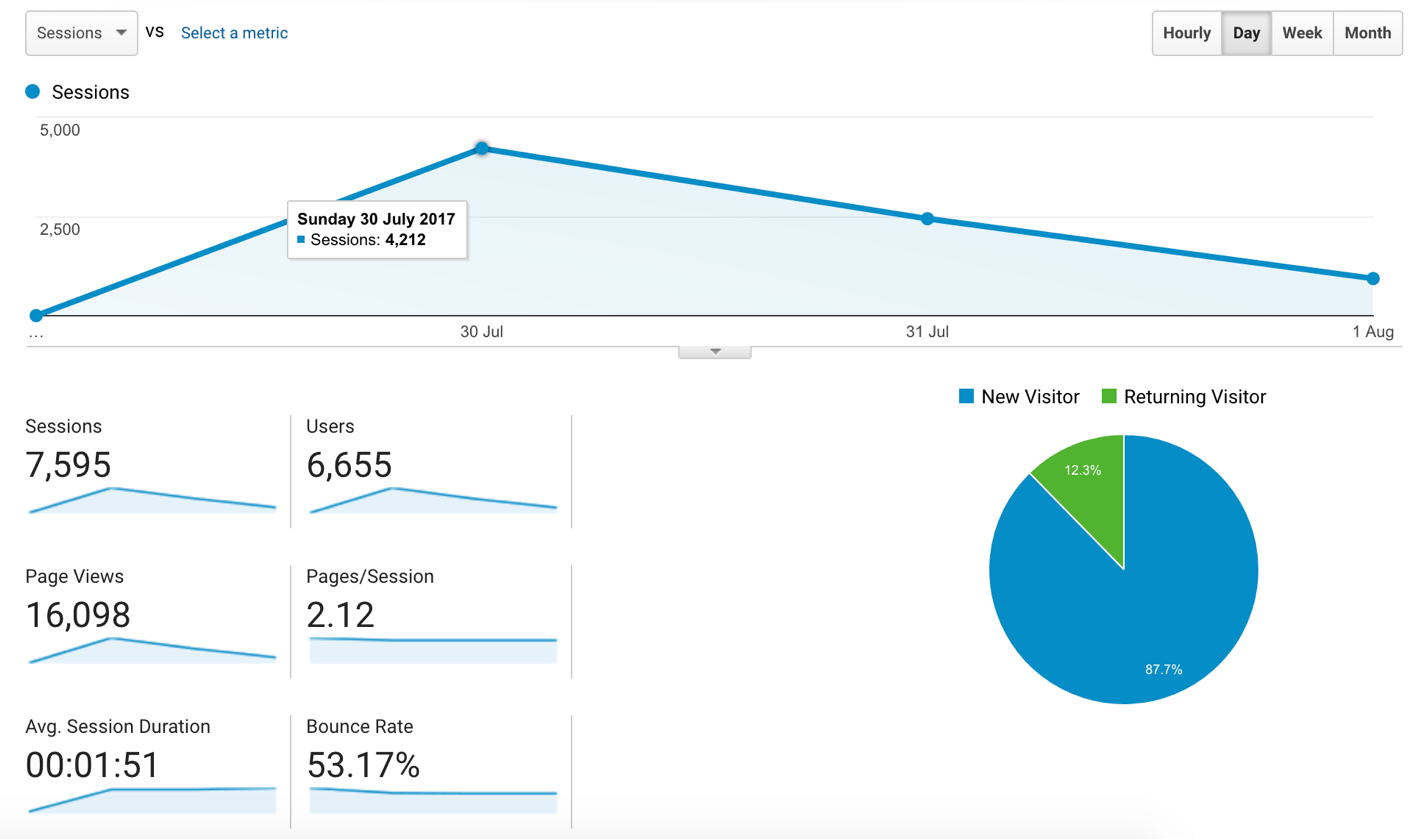 Also, 509 people subscribed to our newsletter, which was a lot. It was the 7.65% of the users who visited Failory.

After launching Failory we received a lot of feedback on the things we should change, ideas for the future, recommendations, kind words, and many emails from people asking to be interviewed. In fact, it was too much feedback, that we are still reading it and improving Failory based on their words.

If you could go back, would you do anything differently?

There are a few things that I (and probably my partners too) would do completely different:

Where you are at now / What are your plans for the future?

In the last few weeks, Failory has grown amazingly. Lots of new emails subscribers, many new interviews published, even an invitation to an event! As I have said, we are trying to grow the community and increase the number of email subscribers, so that we can start monetizing the project. So we are mainly focused on this.

To increase the number of subscribers we are starting to write more articles. We are about to start to offer free eBooks in exchange for emails. Another strategy we are using is cross-promotion of newsletters. We promote a newsletter on our emails, and in exchange, we get a promotion on the other newsletter.

We are also kicking around the idea of starting a podcast. This idea was proposed by the audience and we know it could be successful.

And finally, an almost impossible long-term goal is to raise money. We have built and managed Failory spending only a few dollars, which is one of the reasons we aren’t growing too fast.

Advice for other starters out there?

My biggest recommendation for entrepreneurs who are just starting is to learn from their mistakes! Yes, it can sound cliche - but the only way to achieve success with your startup is by learning from the errors you commit.

Another recommendation: validate your idea. Please, listen to me. Create an MVP (minimum viable product) and start building an audience before launching your startup. If you see that there is no positive feedback, try something else. If you are able to create hype on your product and attract people with your landing page and MVP, success will come.

Finally, listen to your customers. Listen to their feedback, and keep always improving your product according to your user's thoughts!

4,315 Founders
...show you exactly how they built a business to thousands of customers.

That’s why we built Starter Story - the only place where 4,315 founders of successful businesses share with you their exact timeline of building their business to thousands of customers.

Ian
$1.2M/YEAR
The community of DOERS

Industries, markets, and trends - you’ll get access to the world’s biggest, living, breathing database of 8,531 business ideas, side projects, and products to sell.

Based on data points from our 4,315 case studies, you'll find the 201 most effective ways that founders are growing their business right now.

At Starter Story, our goal is to help you make these decisions by giving you the information and answers you need - from 4,315 successful founders that already went through it firsthand.

Join 106,204 starters building the business of their dreams.
Free

To read this exclusive story, join Starter Story Premium!
Explore
Read thousands of case studies and get inspired.
$17/month
Billed annually
Unlock 4,315+ case studies
Filter & search database
Starter
Learn from founders and find your next idea.
$29/month
Billed annually
Everything in Explore
Find your next idea - 8,540 business ideas
Unlock 200+ growth playbooks
$50K+ in deals on tools
Founder
Join our community & build a profitable business in 5 weeks (next cohort starts Spring 2023).
$100/month
Billed annually
Everything in Starter
1 on 1 mentorship for your business
Secured spot in Campfire our 5-week accelerator ($750 value)
Get the Lean SEO course ($250 value)
Questions? Check out our FAQ. Already a member? Sign in