December 2017 was my best month yet. I achieved almost all my goals and learned a lot about Reddit.

If you haven't seen yet, I've been blogging monthly about my progress launching and growing Starter Story.

Why am I sharing this?

I think it's a fun way to reflect on the past and plan for the future. I also believe that being transparent about your business is powerful. Also, if I share my goals with the public, I'm more likely to follow through with them. 😅

Here were the goals I set at the beginning of December, and how I did against them. 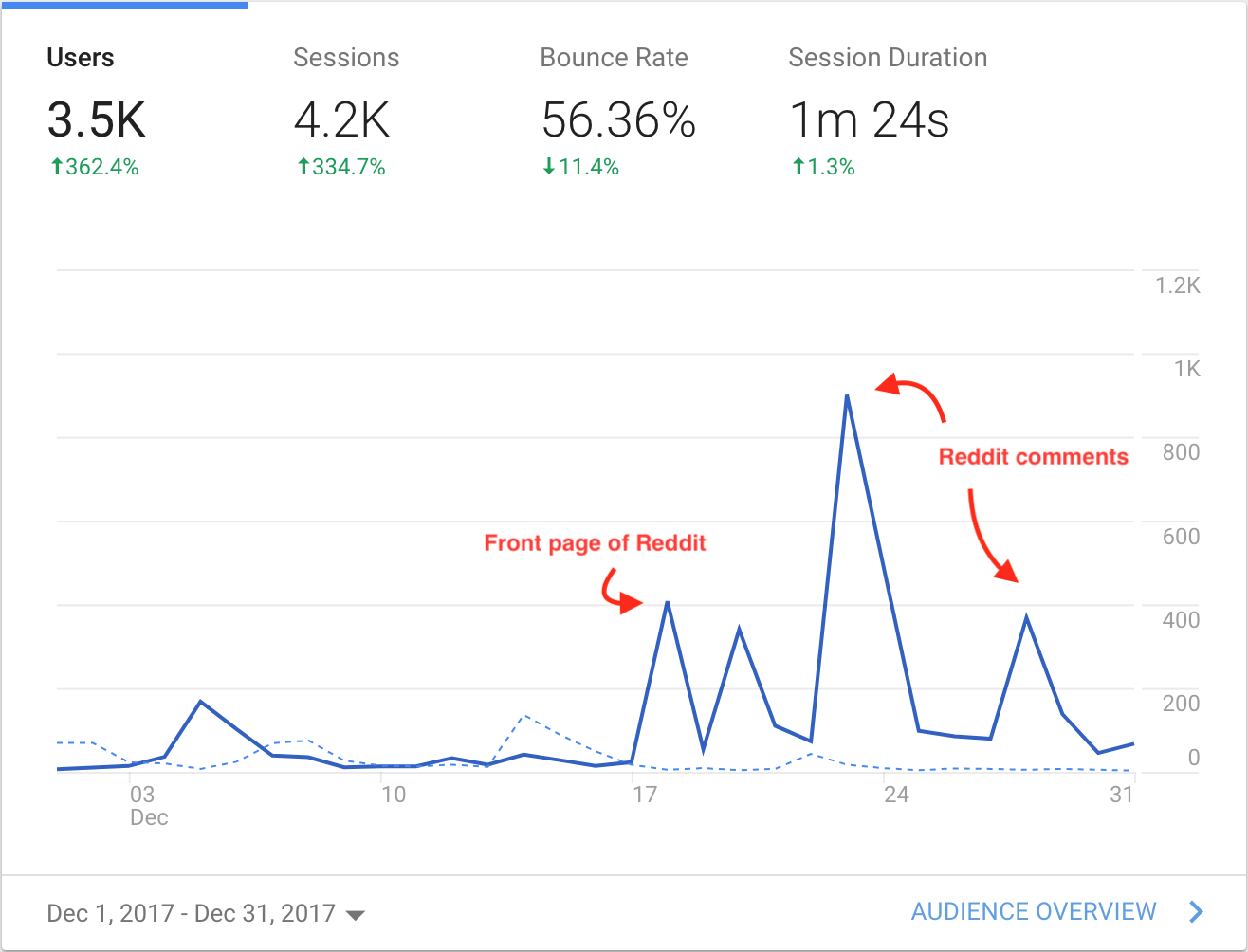 I usually post my interviews on Reddit, but typically get just a few upvotes. So naturally I posted this and didn't think too much about it.

Then I woke up the next morning with a ton of Reddit notifications. It had 80 upvotes and 5,000 views on the post, and it was climbing fast.

Comments started to pour in. People were thanking us for providing this story, congratulating Ahmad (the subject of the interview) on his success, and also asking many follow up questions. I emailed Ahmad and let him know about the success of the Reddit post, and he was able to jump into the comments and respond to everyone's questions.

Not only was it great for me to make the front page, but Ahmad also got some nice exposure for his business. It feels great to be able to give something in return for his great interview. I also received a few emails from people interested in being interviewed on Starter Story.

This is what I think made this post successful:

Appartlently you can. This comment below drove at least 532 visits to my site, even more than my post that made the front page 😮.

I did not expect this. I have driven traffic from Reddit comments before, but nothing more than like 40-50 sessions.

I think what was different about this one was, again, the use of monetary figures in the comments.

Which one of those are you most likely to click on? 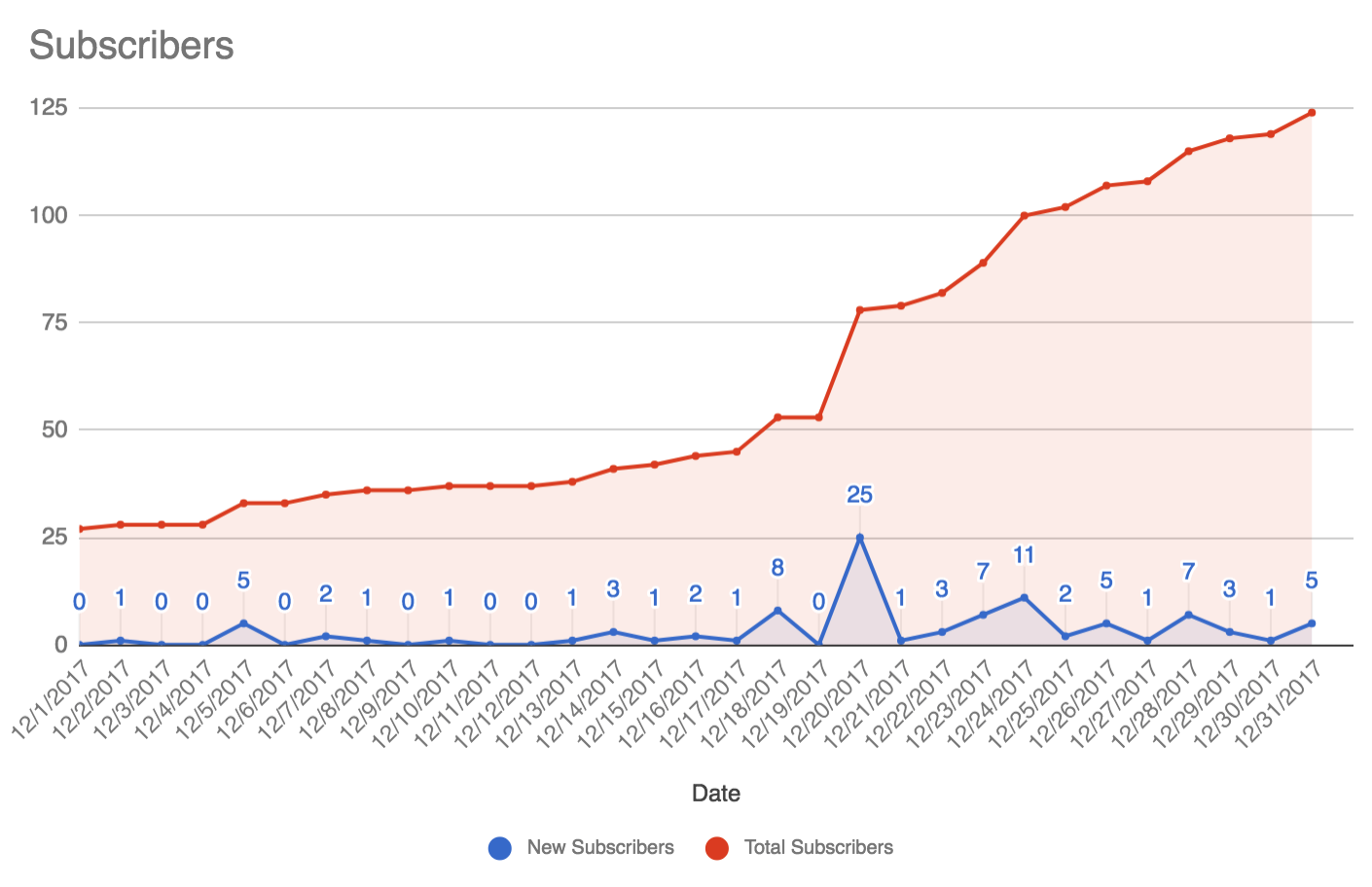 I'm super excited about how much my mailing list increased this month. The biggest daily increase is attributed to my front page post (+25 in one day), but I've also been seeing a trickle of signups almost every day.

It's important to note that my call to action is not super optimized yet. I don't have any popups on my site. But I did my flow slightly by adding a CTA box to all of my interviews. Here's what it looks like:

I didn't reach my goal but got close. Here are the new interviews I did:

I've made some improvements to my process of getting new interviews and content for Starter Story with the help of a little bit of hacking.

So I found a website that had loads of articles of successful e-commerce stores. I wrote a program with a web scraper that was able to grab all of the URLs and put them into a spreadsheet. Then, every day for about two weeks I sent out 10 cold emails to see if the business owners were interested in doing an interview. I found the emails with the help of Email Hunter (a really awesome service).

I haven't done any serious analysis, but I would say that about 40% of people responded to me that they were interested. After sharing more details, nearly half of them agreed to do an interview. I'm surprised (and delighted) by that response rate. I've done some cold emailing for a past startup venture, and I never had success like this.

The response rate I got also became better over time as I crafted better ways of asking for things over email.

One thing that I've learned from reading random blog posts and watching YouTube videos is the concept of permission-based selling, a sales philosophy where you first ask your prospects for permission to sell to them.

I am the furthest thing from a salesperson, but here's how I tried apply that to my cold email strategy: 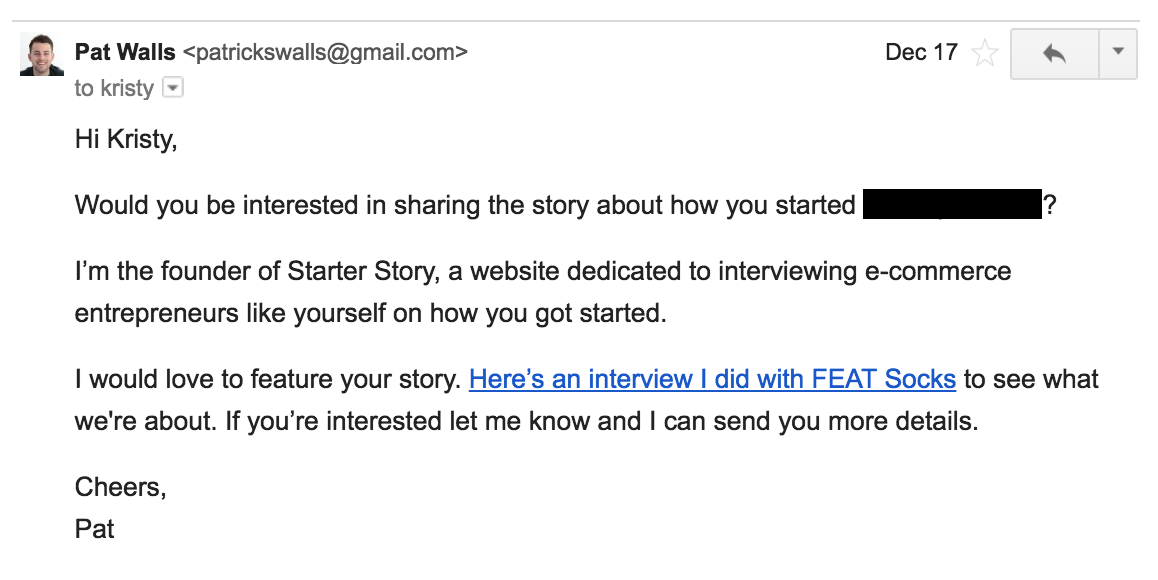 I immediately asked them if they are interested in the interview, which I think is the most important part.

I was also purposefully vague on the details and tried not to "over-explain" myself. Providing the link was also a nice way to prove I'm legit.

January is all about doing the same things that made me successful last month, as well as launching on Product Hunt and figuring out my long term Quora and Pinterest strategy.

You might also like:
The 30 Most Influential Books Recommended By Pr...
Starter Story
How To Validate Your Business Idea
Starter Story
52 Business Ideas You Can Start With Little Cap...
Samantha Walls
Become a premium member to get full access.
Ready to bring your idea to life?
Join Starter Story to get the greatest companion to starting and growing your business.

How a food blog grew a niche audience to over 35,000 active subscribers
$50K+ in savings
Access to hundreds of the best tools to run your business. Including: $5,000 in AWS credits, $1000 Airtable credit, $1,000 in Notion credits, $1,000 in Miro credits, $10K in transactions without Stripe fees, 12 months free on SendGrid, 6 months free on Zendesk, Typeform, 50% off Quickbooks, Hotjar, Algolia, and hundreds of other tools.
2K+
case studies
72.2K
subscribed
400+
hours of content
4M
visitors

"Thank you for creating this. It's refreshing to see how real founders grow their business."
Enter your email to get started.
To read this exclusive story, join Starter Story Premium!
Premium
Full access to case studies, filters, and business ideas database
$6.20 $2.67/week
Billed annually
Unlimited access
Unlock 3,500+ case studies
Find your next idea - 3,956 business ideas
Unlock 200+ growth playbooks
Filter, search, export full database
Premium Plus
All access pass: All courses & guides to start your business
$12.82 $5.75/week
Billed annually
Everything in Premium
$50K+ in deals on tools
Access to hundreds of successful founders
1 on 1 mentorship for your business
Get the Lean SEO course
Questions? Check out our FAQ