Google Big Query
Discover what books Esben reccommends to grow your business!
📗
📗
Product-Led Growth: How To Build A Product That Sells
📗

The business was started in 2019 out of a pivot made of another business founded in 2018 by Sebastian.

We are 100% bootstrapped and have almost 500 customers and millions in ARR. We are still a team of just three people. We have been able to do this using a product-led growth model for growing the business. 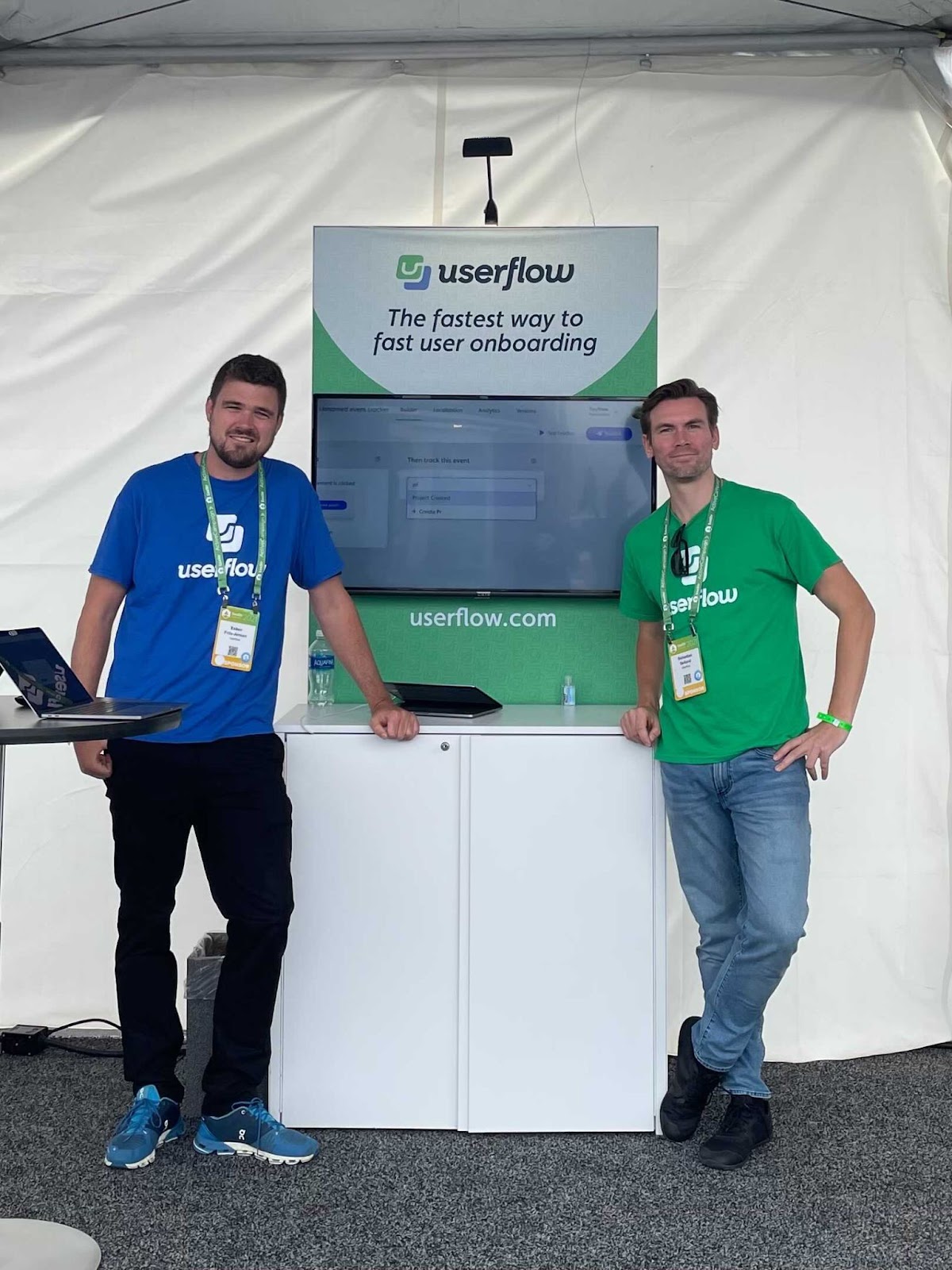 What's your backstory, and how did you come up with the idea?

In 2018 Sebastian founded a company called Studio1 that made it possible to create beautiful and easy-to-main video demos of your SaaS product. As part of the product, he created a product tour, and while the video demo tool got some traction, then many customers were much more interested in the product tour he had built, and many asked him how they could get something similar.

This intrigued Sebastian, and he started scouting the market for solutions that allowed you to build product tours. There were many players in the market, but Sebastian found them all to be limited in functionality and lacked a great UX for building the tours. Therefore in 2019, he decided to pivot Studio1 into what is Userflow today and, it turned out to be a great choice.

He launched an early version where he used a new and different way of the building than the competition, specifically a kanban-style builder, and users loved it.

He initially validated the product with friends at various companies, Studio1 customers, and later went live to more customers.

Despite being bootstrapped in a crowded market filled with VC-backed competitors, we are growing really fast at 10% month over month and have millions in ARR.

Sebastian had built a successful SaaS billing tool in the past, and he had also worked on SaaS tools at Google. So he had an excellent foundation for what it takes to build a great product.

But he also knew that a builder needed a strong UX, so he quickly involved one of his friends, a designer named Jonas, in the building process. At that point, Jonas was a freelance designer, and he later joined Userflow as a full team member.

Sebastian initially launched the tour/flow builder with the kanban style design, which became a game-changer. He then iteratively added more functionality over time but kept a strong focus on the UX.

The iterative approach to launching new things had a close feedback loop to the customers, who gave great feedback on what they found great and, more importantly, not great about the tool. This tight customer feedback loop allowed him to develop a product with a UX that customers loved, and it is still a core part of the development process today.

As mentioned previously, Sebastian validated the product with friends and studio1 customers before the public launch.

One month prior to the public launch, he set up a Google Ads campaign that led users to the landing page where they could learn more about Userflow. He spent approximately $1,000 and got 200 clicks, 30 sign-ups, and two ended up buying a subscription.

The public launch was announced on Product Hunt, and Userflow ended up becoming #5, which resulted in a lot of traffic and signups. Sebastian also emailed his network about the launch. Product Hunt led to 130 signups in the first two months, and more than15% of them turned into paying customers.

The Google ads test, as well as the public launch, showed the high interest in Userflow, and that businesses were ready to pay for it. Which was awesome.

All these initial ads were fully self-financed, but as customers started paying, Userflow became customer-funded.

Your primary focus should be on building a great product that solves a real problem for customers.

Userflow’s initial growth was heavily based on SEM (Google Ads) and word of mouth, combined with a strong product-led growth model for converting and retaining customers.

In early 2021, Esben joined Sebastian as a co-founder to strengthen this model further.

Esben had previously built sales and customer success at Cobalt, a 200+ employee company, which he co-founded in 2013. So, he had a lot of experience in building growth for SaaS.

We kept the existing acquisition channels like SEM, as it worked great, but Esben also focused on strengthening it by adding SEO and thought leadership to the mix. He also further operationalized the product-led growth strategy that Sebastian had already built the foundation.

We have made a video series on how we do product-led growth to convert and retain customers (found here), but some of the key components are

Finally, we think product-first in everything we do. E.g., if we get a support question many times, we think about how we can fix it in the product by improving the UX or making it easier to self-serve.

How are you doing today, and what does the future look like?

Userflow is doing fantastic. Early on, we decided that we would always be bootstrapped, and so far, it’s been amazing.

Despite being bootstrapped in a crowded market filled with VC-backed competitors, we are growing really fast at 10% month over month and have millions in ARR.

We have been able to do this without having to hire additional staff. We are still a team of 3 people Sebastian (CEO and CTO), Esben (Growth), and Jonas (UX designer).

The strong focus on great UX, product-led growth and scalable online acquisition channels (SEM and SEO) has gotten us to where we are today and we plan on just continuing on that journey.

We want to grow as fast (if not faster) as any VC-backed Startup, but by being bootstrapped, we have more autonomy to decide which direction we want to go in.

We have both learned that starting a bootstrapped business and building a company that supports hundreds if not thousands of customers with a small team is possible.

We both came from SaaS orgs, where we hired a lot of people early, and it’s been fun to try something completely different this time.

But we are always on the search for a true SaaS CRM. See this article Esben wrote on the same: The Search for SaaS CRM.

The top books for us have been:

And we also listen to a lot of podcasts but especially enjoy SaaS Club’s podcast.

Our two main pieces of advice would be:

Join 106,805 starters building the business of their dreams.
Free