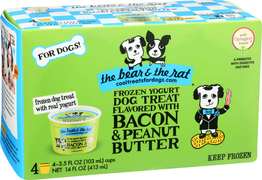 Hey, there! My name is Meg Meyer and I’m the Co-Founder of The Bear & The Rat: Cool Treats for Dogs. We make healthy & fun, cool treats for dogs! Our first line is a frozen yogurt dog treat of which we have three flavors. Instead of cookie dough or vanilla (flavors humans would like), we make flavors like Bacon & Peanut Butter!

My husband had the idea for our company when he was eight years old. His family would go for cones on Sunday. This was the 80’s when people treated their dogs more like animals and not as members of the family, but his family was different. Every week, his dog Babette would get a scoop of vanilla. His mom and brothers and sisters loved watching her eat the frozen treat and she loved it too, but she would never tolerate it well. His dad would always have to clean up the mess, but they continued to get it for her because well, it was fun (and very entertaining).

We tested our idea in 2010 by doing three farmer’s market booths at the Cherry Creek Farmer’s Market. It cost around $500 and I had to sell my bike because we didn’t have the money, but it was worth it because we realized that we weren’t crazy. We sold out every week we were there. And that’s when we started looking at ice cream facilities to see if a company could help us figure out a recipe and make the product for us. 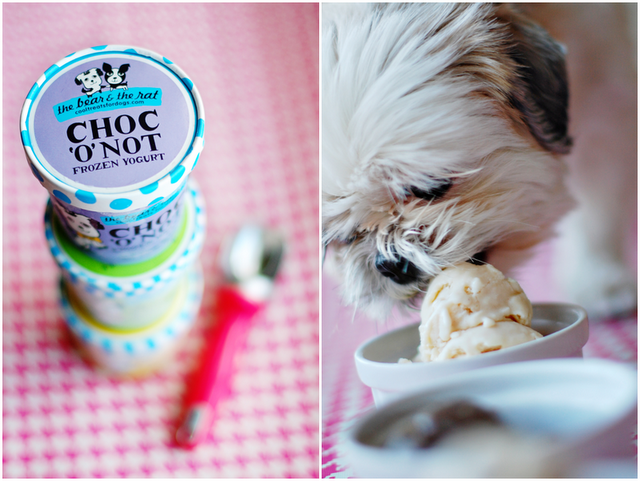 We launched pints instead of single-serve cups because they were easier to produce and make and we thought they helped us look different from the competition. We discontinued the pints in 2015.

When we got married, Matt remembered that time in his life and said, ‘Wouldn’t it be cool if there was a product like ice cream that was actually healthy for dogs.’ So we looked to see what was out there. We saw a couple of brands made by huge companies that are terrible for dogs (loaded with by-products, chemicals, artificial ingredients) and knew we could do better. But it wasn’t until I went to an entrepreneurial conference in 2010 that we decided to go for it. At the conference, I heard Jack Dorsey (founder of Twitter), speak about the new company he was launching, Square. He said that with Square, anyone could make their cell phone a credit card machine. We had always had the idea that maybe we could sell our product to dog owners at a dog park but figured that no one would have cash on them. I called Matt and told him about it and said that I was game and we should take steps to start the company.

The next week, I started looking for a new job because I was working a very stressful job that demanded a lot of hours. I knew that if I could get another job for about the same money and start working on building the company on the side, it would have to be more low-key than the one I had. I found another job that was under the radar and worked that job for the next three and a half years. I didn’t tell anyone at that job that we had a side gig. We even took time off to go on Shark Tank and exhibit at a huge tradeshow on the West Coast but kept the whole thing away from our bosses and co-workers. Matt worked as a sales rep, which was a genius because he was able to deliver our product along his route.

Turns out, it wasn’t easy to launch dog ice cream. It’s expensive to produce, store and ship. There’s a ton to learn and it requires distributors to sell the product locally. It’s the only way to get costs down on a frozen product. Manufacturers are able to send a bunch of products to a distributor who can then get it out on trucks in a local territory. But it was hard to get distributors on board and the learning curve to grow the business was high.

We had a local ice cream facility make our product and we were able to sell into local Whole Foods stores and independent pet stores. Matt was able to deliver to them locally, but we were not selling or making much.

In 2011, we learned that we were going to be parents and we weren’t really sure how long we’d continue with the side hustle, the day jobs, and being parents. But in June, a Shark Tank producer called and asked us to apply to be on the show. 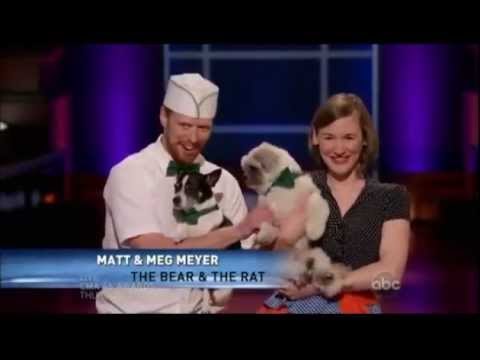 Our Shark Tank episode aired in Oct 2012 and we had our first child in Dec 2012. We didn’t get a deal and life pretty much stayed as it was - except we were also parents. We were tired and burning out quickly. And then, about a year after our first episode aired, an angel investor saw the show and called us. We made a deal with them at the end of 2013 and in 2014, started working for the company full-time. In March of 2014, we went to our first pet trade show. The goal was to get distributor’s so that we could grow. And we did. We brought on several distributors that year. Also, we launched our 4-packs, which had four single-serve cups to a pack. But by the end of the year, we were almost out of cash. We burned through it quickly because we were paying upfront for materials and we were giving distributor deals and trying to grow the brand.

We needed to add more distributors so we hired a sales group to help us grow, and we added a couple more distributors. But at the end of 2014, It was obvious we were going to need to raise more money. And also, we wanted to launch new products that weren’t frozen. So we raised more money from the angel investor. In 2015, we launched a freeze-dried yogurt for dogs and we thought it was going to be The Next Big Thing.

But the minimums to produce it were high and we just weren’t doing the volume we needed to do with our existing customers. We started burning through cash and decided quickly we were going to need to discontinue the freeze-dried product, which is still disappointing. If we had the distribution we have today, we likely could make the product work. We were really just too early on with that product.

At the end of 2015, we were pretty much out of money. I took a full-time job with a cookie company in Boulder and pretty much left Matt to try and grow the company, which he did. He did the seemingly impossible: he got the Publix buyer on the phone and got a meeting (through sheer will and persistence). Getting into Publix enabled us to start growing our grocery business and allowed us to partner with a much-needed manufacturer. This was a turning point for our company, and I credit it all to Matt’s determination. He was not ready to give up. We are without question, here today because of him. 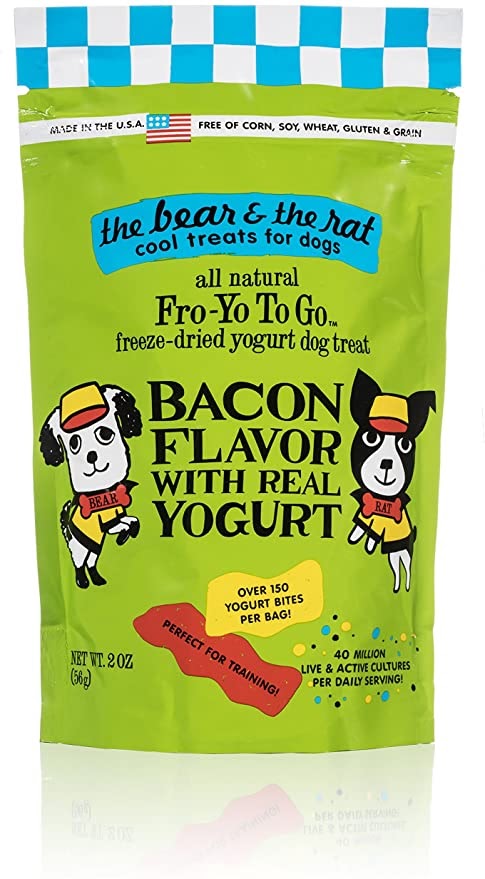 Today, we are sold nationally -- in the ice cream aisle, at Whole Foods. We are the only dog product in the ice cream set. We are also sold at Publix, Harris Teeter, Lowes Foods, Wegmans, King Soopers, and 3,000 independent pet stores.

Tenacity and hard work will get you places!

We have launched another line of products: frozen goat milk yogurt for dogs & cats, which is sold to independent pet stores. And we are working on an exciting new frozen line for dogs & cats. Although it’s just one SKU, it’s a different format from anything out there and we’ve got a lot of excitement around it. 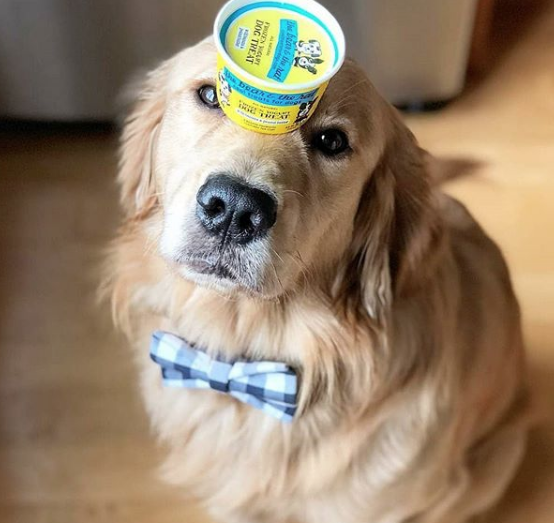 Tenacity and hard work will get you places! Also, never underestimate doing a little bit of work every day on a long-term goal because a little bit every day adds up, and then all of a sudden, you’re going on Shark Tank! 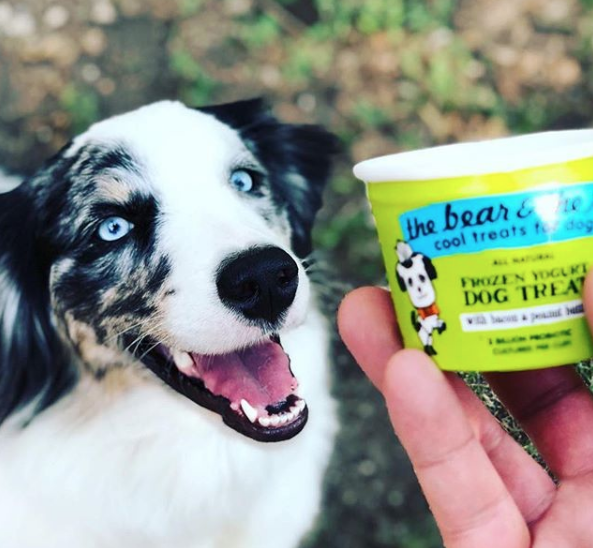 Because we are frozen pet treats, we don’t focus on e-commerce. Our focus is on growing brick and mortar distribution.

I love How I Built This on NPR. The Profiton CNBC is great. Also, I used to watch a lot of Shark Tank until we were on and now, I can’t stand to watch it. Too formulaic but there are a lot of things to learn from watching it.

Early on, we talked with an executive at a pet company to get his advice and he said to try and negotiate out of the 2% early payment discount that most distributors want. We do that with some of our distributors and it’s great because we are able to maximize our dollars, but in order to keep cash flow rolling, we have a mix.

Walk a trade show in your industry to meet other people starting out or to meet possible mentors. Google companies you admire and see if you can find any podcasts where they are talking about how they built their business. And most importantly: just start working at it every day.

Find us on Instagram, Facebook, LinkedIn. Check out our store locator to find a store near you that sells our cool treats for dogs!

You might also like:
52 Business Ideas You Can Start With Little Cap...
Samantha Walls
The 30 Most Influential Books Recommended By Pr...
Starter Story
Designing and Prototyping A Product
Starter Story
Become a premium member to get full access.
Ready to bring your idea to life?
Join Starter Story to get the greatest companion to starting and growing your business.