The Book of Pirates (Dover Children's Classics) Howard Pyle
Learn how thousands of people are earning up to $2.5M/month online.
On Starting A Parody Business
Thank you Klaviyo for sponsoring Starter Story ❤️
Turn one-time buyers into repeat customers. Try the platform loved by 265,000 brands

I’m John Baur. Once upon a time, I was a normal guy, father and working journalist. Then I and my friend Mark – also pretty normal – came up with the idea for International Talk Like a Pirate Day and the rest is, if not history, at least a pretty good story. 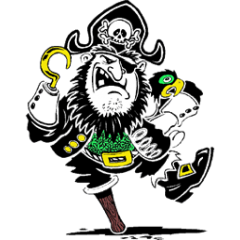 International Talk Like a Pirate Day started on a racquetball court where two friends, John Baur and Mark Summers, were trying to get back in shape (as if we’d ever been in shape before. During the course of the game, we started insulting each other in pirate lingo and decided the work needed a holiday where every man, woman, and child talked like a pirate.

Our brainstorm (if that’s the word that applies here) came to the attention of Pulitzer Prize-winning humor columnist Dave Barry, who wrote about it in his syndicated column. And just like that the idea went from a private joke among a few friends to an international phenomenon, celebrated on all seven continents (yes, including Antarctica), the White House, the International Space Station, and N.Y. Times Crossword Puzzle.

There’s no model. Just do what you love doing, and follow the fun.

We started a web site (because EVERYONE has a website, right? And within the first six months, we’d had over five million hits. We actually crashed out ISP’s server the first year we were online on Sept. 19 (the date of the holiday.)

No thought went into it whatsoever. It’s been purely a matter of serendipity and whatever idea amused at the moment.

Two women – my wife and a friend who is a web designer by trade did all the heavy lifting, but we had funny ideas.

The single most important factor in “launching” Talk Like a Pirate Day, other than actually having the idea on the racquetball court, was contacting Dave Barry and inviting him to become the spokesman. He wrote an amusing column and two weeks later we were being interviewed on the radio in Ireland and Australia and on NPR.

The next thing was the website. A friend volunteered to design it and until recently served as WebWench. The first year we were online on holiday, we took something like 6 million hits in a matter of hours and crashed our ISP. So in retrospect we should have warned them they were going to get a LOT of traffic, but who knew?

First of all, they aren’t customers. They are friends, literally. Customers are people who give you money for a product or service. We don’t have either. I mean sure, we’ve sold some T-shirts through CafePress.com, and some books. The sales basically cover the cost of having a web site. Our book “Pirattitude” was published by Penguin and went through if memory serves, a dozen printings. So we’ve had some success in that regard. We have appeared across the country, from Florida to Alaska, performing in Las Vegas, Los Angeles, Philly, among other places. Also some TV. And we’ve gotten paid for it, so I suppose I should have included that under revenue, but it’s been years since we’ve been on stage together I kind of forgot The best paying gig we had was Vegas, where we got $2,500 and they put us up for the night – at the Venetian.

But I think the single most important key to our success is we don’t take ourselves at all seriously. We don’t walk into a pirate group and say “You need to pay attention to us because WE started to Talk Like a Pirate Day!” They’d boot us out on our butts. We’re there to share the fun.

People ask us, “How long are you going to keep doing this? And our answer is always, “As long as it’s fun.” And you’d better believe this is fun.

We get to dress like pirates (and our pirate wardrobes and gear and cutlasses are all tax-deductible) and swagger, people buy us drinks. We’ve got friends all over the country, all around the world. Life is good.

Well, my choice of wife was a smart one. Most wives, if you come home and say you lost your job because of budget cuts, would start helping you pull together your resume.

But 10 months after the pirate phenomena started to blow up I had to tell Tori I was being laid off and her response was, “Maybe you should see how far you can take this pirate thing.” THAT’S a wife!

We don’t have a platform so much as a plank.

People have asked us for advice on starting their own holidays, and all we can tell them is, “There’s no model. Just do what you love doing, and follow the fun.”

It’s not, I suppose, the way my parents would have chosen for me to come to the world’s attention, but when the wave comes up, you ride the wave. And try to have fun.

Not really, but we’ve always got a weather-eye out the next adventure and a likely crew of rovers to share it with.

You might also like:
50 Lucrative Ways to Make Money on the Side
Pat Walls
20 Inspiring Small Business Ideas Earning At Le...
Pat Walls
How To Validate Your Business Idea
Pat Walls
Become a premium member to get full access.
Already a premium member? Sign in
Ready to bring your idea to life?
Join Starter Story to get the greatest companion to starting and growing your business.

How a food blog grew a niche audience to over 35,000 active subscribers
$50K+ in savings
Access to hundreds of the best tools to run your business. Including: $5,000 in AWS credits, $1000 Airtable credit, $1,000 in Notion credits, $1,000 in Miro credits, $10K in transactions without Stripe fees, 12 months free on SendGrid, 6 months free on Zendesk, Typeform, 50% off Quickbooks, Hotjar, Algolia, and hundreds of other tools.
2K+
case studies
145K
subscribed
1K+
hours of content
8M
visitors

"Thank you for creating this. It's refreshing to see how real founders grow their business."
Enter your email to get started.
To read this exclusive story, join Starter Story Premium!
Premium
Full access to case studies, filters, and business ideas database
$6.20 $2.67/week
Billed annually
Unlimited access
Unlock 2,326+ case studies
Find your next idea - 6,457 business ideas
Unlock 200+ growth playbooks
Filter, search, export full database
Premium Plus
All access pass: All courses & guides to start your business
$12.82 $5.75/week
Billed annually
Everything in Premium
$50K+ in deals on tools
Access to hundreds of successful founders
1 on 1 mentorship for your business
Get the Lean SEO course
Questions? Check out our FAQ. Already a member? Sign in