Kyle Bergman is an American entrepreneur. Kyle started The Great Fantastic in 2017 and is based in New York City.[1]

Kyle Bergman, of The Great Fantastic

Kyle started The Great Fantastic in 2017. They detail the beginnings of their company in their Starter Story interview: [1]

Q: How did you get started on The Great Fantastic?

At first, I was really just trying to solve a personal problem - Sweatpant overalls didn’t exist, and I wanted a pair. I’ve always loved overalls for reasons I can’t really explain. Perhaps it’s the fact they’re a little unique to wear...yet functional and practical.

Anyways, a friend actually sent me a BuzzFeed article about a novelty pair of sweatpant overalls they looked like denim overalls but were made of a sweatpant material. I said to myself, “Man, I would never wear those...but regular sweatpant overalls I would 100% rock!”.

Alas, “normal sweatpant overalls” did not exist online after a quick google search, nor in any stores that I visited. So I made them. But let’s back up for a second...

When my friend showed me the article it was early 2016, and I was a merchandise planner at Bloomingdale’s. Right out of college I went into the Bloomingdale’s executive training program and was there for 4 years learning the ropes of being a retail merchant. For those that aren’t exactly sure what that is - a merchant or buyer is someone who manages vendor relationships and decides what products a store will sell. Every item you’ve ever looked at in a department store like Macy’s or Bloomingdale’s, or even non-traditional retail stores like Equinox or Cabela’s has a buying team behind it that is making decisions on what products should shown.

I was an assistant buyer in luggage, a senior assistant in women’s fragrances, and then an associate merchandise planner in jewelry. Planners work with buyers to analyze the inventory risks and opportunities of the products and brands they purchase. The skills I acquired from these roles would play a critical role in my brand’s launch and growth.

In May 2016, I left Bloomingdale’s to pursue an amazing opportunity as the Men’s Grooming Buyer at Birchbox. Birchbox is a disruptive tech/e-commerce company that pioneered what is now a massive and very competitive subscription box environment. A little after I joined Birchbox, I began my MBA journey via the part-time program at NYU’s Stern school of business.

Around Winter ‘16/Spring ‘17 is when a few interesting things happen. I learned through school about Alibaba’s B2B platform, where a potential buyer no matter how big could procure goods from a seller. Additionally, I learned about Google’s Keyword Search Planner tool, where you could see what the search demand was for a given keyword, during a certain timeframe. Lastly, I began to learn more about Amazon’s fulfillment service. These 3 concepts would be instrumental to my company ever even getting off the ground. 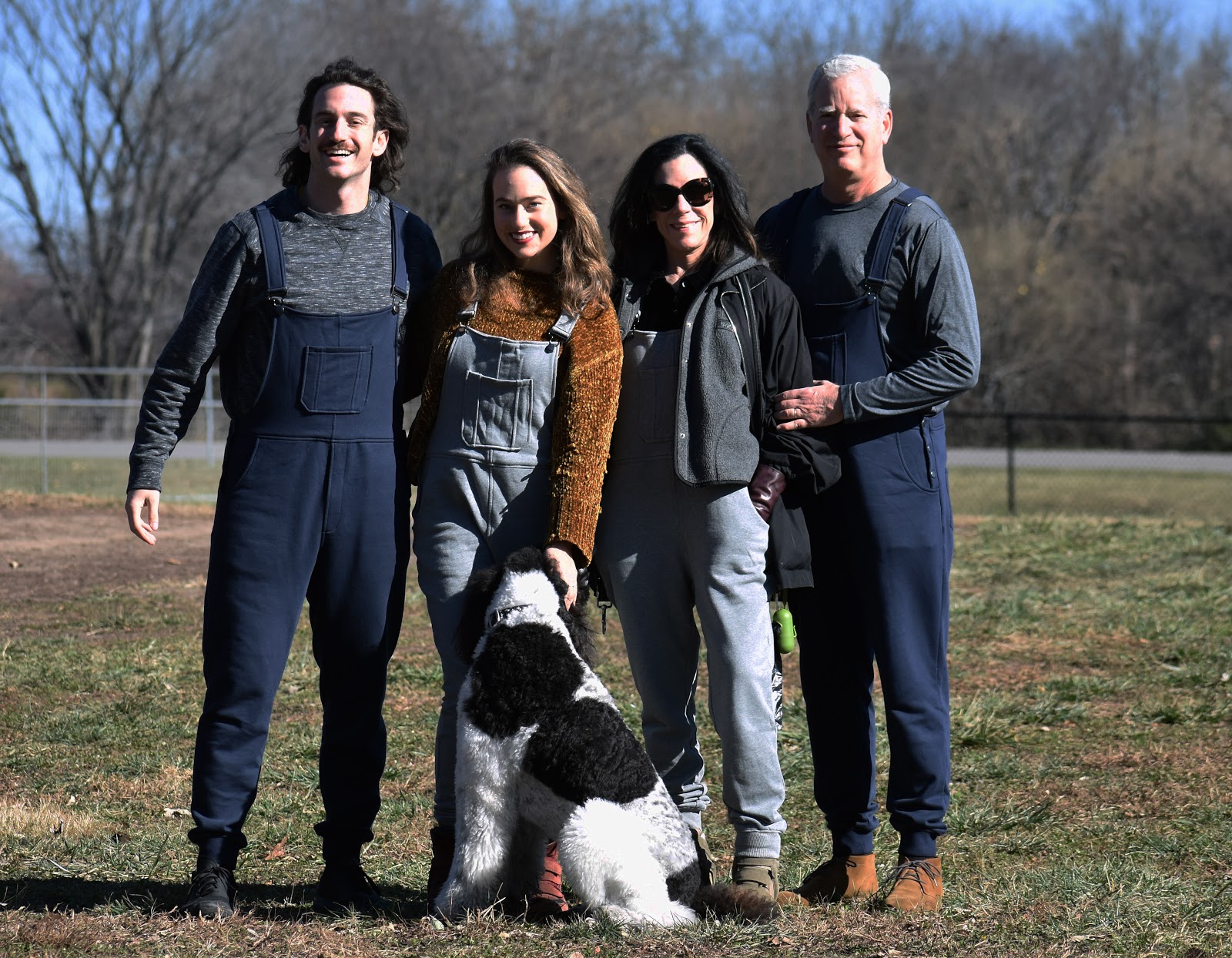 Kyle and his Mom, Dad, Sister, and Dr. Honig (the family doggo)

Problem was, the minimum order quantity was 300 units. In other words, the supplier would only make sweatpant overalls for anyone who wanted 300 pairs or more. At the time, I had no intention of obtaining more than 1 (for myself!). However, I knew based on my buying experience at Bloomies that if I bluffed and looked like a serious buyer, I could get a sample for next to nothing...which at the time would solve my problem of simply just wanting a pair for myself.

I did in fact negotiate a price for 1 sample (think it was about $80 US), and actually received my pair - problem solved!

But then a couple new “good” problems arose:

1.) the french terry cotton they were made out of was really soft and amazing

A part of me was shocked, but after I thought about it...it made sense - probably a little awareness created from the BuzzFeed article, but more importantly, people just like me were looking for an awesome, comfy combo.

Once I realized I had a supplier, and there was some sort of demand for this unique apparel item that didn’t exist, I knew the only way I would have any chance of selling sweatpant overalls was through Amazon’s fulfillment service.

Living in a shoebox apartment in NYC, I didn’t have any room for inventory, nor did I want to spend my time picking and packing orders….or finding a warehouse that would do the same. Additionally, I didn’t have any experience or budget to do a meaningful marketing campaign, but I knew Amazon would help me overcome these obstacles by

1.) holding my inventory in their warehouses

2.) listing my product on their site

What I didn’t realize is that you needed a legitimate business to start an Amazon seller’s account, and so I incorporated The Great Fantastic, LLC. in March 2017.

Why The Great Fantastic? Well, I knew I didn’t want to pigeonhole myself right out of the gate with a company name like “Sweatpant Overalls, Inc.”...so I chose a funky term that I thought could one day could become an amazing brand. Taking a trip into the great fantastic is something my Mom would say when referring to risk-taking and adventuring into the unknown.

It always stuck with me, and I thought it was such a cool term that could comprise the vibe and message I was trying to communicate..which was something like, “We don’t take ourselves too seriously, but we don’t mess around when it comes to comfort.”

But how did I initially fund it? Well, in order to pay for business school, I had to take out a bunch of student loan money. For better or worse, I took out too much money for my first term and received a disbursement to my bank account for the funds that were not used for tuition, which

Normally, a rationally-minded individual would send that money back to the lender as it’ll lower your student loan debt. I decided to use this money to kickstart my sweatpant overalls project, and used most of it to pay for my first order from overseas.