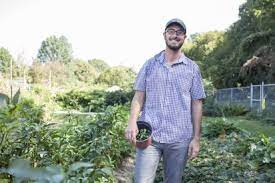 daniel started Small Axe Peppers Hot Sauce in 2014. They detail the beginnings of their company in their Starter Story interview: [1]

Q: How did you get started on Small Axe Peppers Hot Sauce?

It all started when our founder John Crotty was looking for a building in the Bronx for his affordable housing development organization. By chance, he spotted an empty lot with southern exposure. While others may have seen it as just another patch of urban wasteland, Crotty saw potential.

He knew the trash-strewn plot was perfect for a community garden. His next thought was about what they could grow there. His mind jumped to growing peppers and making hot sauce out of them, because, well, it was the only thing we could grow in a confined space and make more of an end product.

Turns out, one hundred pounds of peppers becomes 500 pounds of hot sauce. All other fresh produce for commercial purposes goes the other way—you grow 100 pounds to sell 75.

So, the goal was to help these gardens and make a commercially scalable product. And the vehicle to achieve this goal? Hot sauce.

It just made sense. It all worked out perfectly. After all, who doesn’t love hot sauce?

With the vision fully formulated, Crotty contacted his childhood friend King Phojanakong, chef and owner of the Lower East Side’s Kuma Inn, and asked him to develop some sweet, savory, spicy, and salacious sauces, which ultimately became the Small Axe Peppers line.