Andrew Moore is a Canadian entrepreneur. Andrew started Felony Case in 2012 and is based in Toronto.[1]

Andrew started Felony Case in 2012. They detail the beginnings of their company in their Starter Story interview: [1]

Q: How did you get started on Felony Case?

It’s a funny origin story, because I never set out to start an iPhone case company.

I had just graduated from college and I was working as a driver delivering construction supplies. It gave me a ton of time to listen to podcasts and I was really drawn to tech and startup focused ones. I had an idea for a while to do a wishlist website where people could create and share a list of gifts they wanted. I ended up having the site built, but I didn’t know how to get people using the website.

Don’t be afraid to start! Don’t overthink it, get a product out into the world and start your journey.

From there, I decided I wanted to sell a tangible product, something that people can touch, feel, use and form a connection with. Something that serves a purpose and brings value.

In 2012, I was on Twitter and someone I followed tweeted a photo of this crazy, punk rock looking metal studded iPhone case saying “Where can I get one of these?!” I had another look at the photo and thought it couldn’t be that hard to make it myself. The next day I went on eBay, ordered silicone iPhone 4 cases and 100 metal screw in “punk” studs (the kind you usually see on studded belts or leather jackets). I replied to the tweet “Give me a few weeks, I’m going to try and make one”.

The next week I was on vacation in Miami. My friends and I went to a bar and ended up talking to a girl with a multicolored mohawk, bullet shell belt, ripped fishnets and huge platform boots - a total punk rocker. She introduced herself saying “I’m Melanie but my friends call me Felony”. That word stuck with me and ended up becoming the name of the brand.

When I got home the cases and studs I ordered were waiting for me. My roommate at the time designed leather goods, and had a hole punch tool that’s used to punch the belt holes. I used it to punch the holes in the silicone case, and then screwed in the studs by hand. 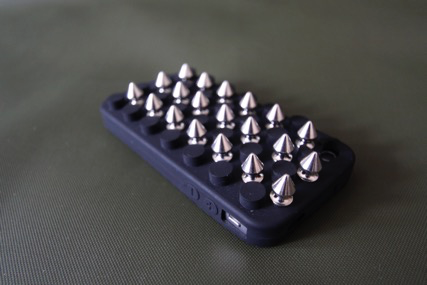 This is one of the first cases I made. I used the ‘lego’ case so I could punch the holes evenly between the dots.