Alberto Martínez Guerrero is a Spanish entrepreneur. Alberto started Streamloots in 2018 and is based in Valencia.[1] 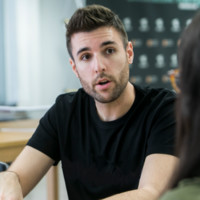 Alberto started Streamloots in 2018. They detail the beginnings of their company in their Starter Story interview: [1]

Q: How did you get started on Streamloots?

When I was still a student at the university, studying computer engineering, I felt that I wanted to start a project and learn from the process of building something. It was right at that moment when I decided I needed to talk to my parents and ask them to allow me to quit university for one year and try to work on a personal project.

I started with small projects, working as a marketing freelancer, and then I decided on founding a marketing agency. With one of these projects, I participated in a startup accelerator in Spain. The project did not go well but at this startup accelerator is where I met my current co-founders. Since my project wasn’t going well, I stopped working on it. This is when I started working with my current co-founders.

At that moment, all my teammates and current partners and I, all had the same problem in our minds: “The problem of monetization in e-sports and live streaming”.

We started trying to validate different business models: a platform for amateur players to win money betting on other players where they can monetize the hours playing video games and another platform to invest in professional esports players and teams in the blockchain.

With this last idea, we reached the final stage of the YCombinator selection process. But we had a problem. We couldn’t prove that our idea worked because no one would pay $1 to invest in esports players or teams. After all, the platform was virtual. We tried to validate this model but it was so complicated in legal terms and, having the same idea in mind, we moved to “blockchain tokens” and changed it for digital cards. And, instead of investing, the viewers could support the streamers buying their chests.

At that point, we were able to validate the idea, because we did not have complex legal terms. In 2 weeks, we contacted more than 50 streamers by email. 3 of them answered us and started an MVP. 3 landing pages with a card collection (25 cards on each collection) and you can purchase a chest and redeem a card and appear on the streamer screen.

We launched this MVP on the 6th of January in 2018. The first day we did more than $500 in revenue. But this was not the best part. The best part was that other streamers started asking us to add it to their streams because they loved the product. They joined a waiting list because we didn’t even have a way for them to register!