Learn how thousands of people are earning up to $2.5M/month online.
65 Inspirational Muhammad Ali Quotes [2022]

Nicknamed The Greatest, he is widely regarded as one of the most significant and celebrated sports figures of the 20th century. He was the first fighter to win the world heavyweight championship on three separate occasions. He is also known for his social message of black pride and black resistance to white domination and for refusing induction into the U.S. Army during the Vietnam War.

We've put together an incredible collection of Muhammad Ali quotes to read. 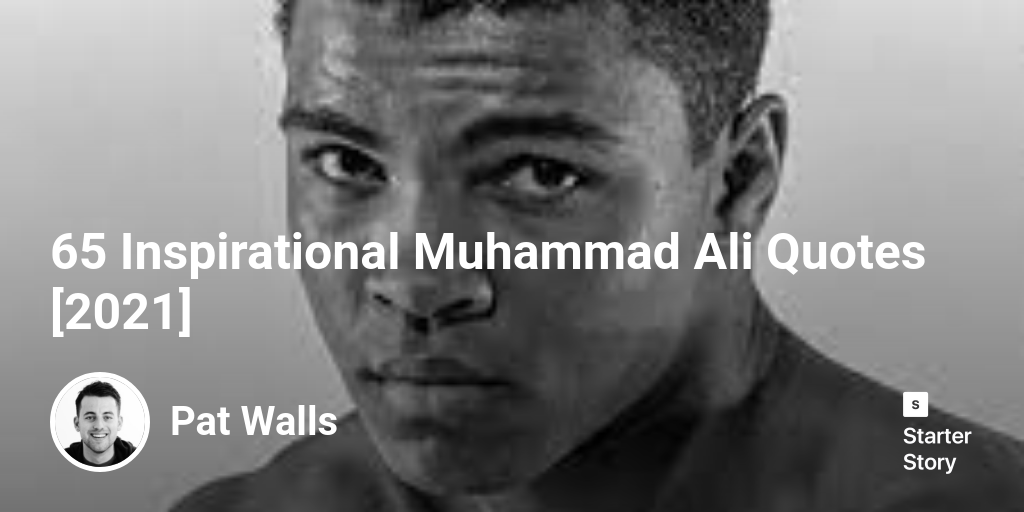 “You don’t have to be in a boxing ring to be a great fighter. As long as you are true to yourself, you will succeed in your fight for that in which you believe.”

“There are no pleasures in a fight, but some of my fights have been a pleasure to win.”

“We can’t be brave without fear.”

“The best way to make your dreams come true is to wake up.”

“I wish people would love everybody else the way they love me. It would be a better world.”

“I don’t count my sit-ups; I only start counting when it starts hurting because they’re the only ones that count.”

“It’s lack of faith that makes people afraid of meeting challenges, and I believed in myself.”

“You lose nothing when fighting for a cause.”

“If you even dream of beating me, you’d better wake up and apologize.”

“Silence is golden when you can’t think of a good answer.”

“To be a great champion you must believe you are the best. If not, pretend you are.”

“I don’t trust anyone who’s nice to me, but rude to a waiter because they would treat me the same if I were in that position.”

“Jokes? There are no jokes. The truth is the funniest joke of all.”

“I know I can learn to hit without getting hit.”

“I am the greatest, I said that even before I knew I was.”

“He who is not courageous enough to take risks will accomplish nothing in life.”

“The greatest victory in life is to rise above the material things that we once valued most.”

“I am the astronaut of boxing. Joe Louis and Dempsey were just jet pilots. I’m in a world of my own.”

“A rooster crows only when it sees the light. Put him in the dark and he’ll never crow. I have seen the light and I’m crowing.”

“No one knows what to say in the loser’s locker room.”

“My principles are more important than the money or my title.”

“What keeps me going is goals.”

“When I won the Golden Gloves in 1960, that made me realize I had a chance. And when I won at the Olympics, that sealed it: I was the champ.”

“Truly great people in history never wanted to be great for themselves. All they wanted was the chance to do good for others and be close to God.”

“Too many easy victories can ruin a fighter just as much as a long line of defeats.”

“It’s in my blood to be around people while I was training.”

“People don’t realize what they had till it’s gone. Like President Kennedy, there was no one like him, the Beatles, and my man Elvis Presley. I was the Elvis of boxing.”

“The critics only made me work harder.”

“I’m not the greatest, I’m the double greatest.”

“Live every day as if it were your last because someday you’re going to be right.”

“It’s hard to be humble when you’re as great as I am.”

“Only a man who knows what it is like to be defeated can reach down to the bottom of his soul and come up with the extra ounce of power it takes to win when the match is even.”

“I have never heard anything that affected me like those words: ‘Heavyweight Champion of the World.’”

“Wisdom is knowing when you can’t be wise.”

“Champions are made from something they have deep inside them- a desire, a dream, a vision. They have to have the skill and the will. But the will must be stronger than the skill.”

“I’ve made my share of mistakes along the way, but if I have changed even one life for the better, I haven’t lived in vain.”

“Hating people because of their color is wrong. And it doesn’t matter which color does the hating. It’s just plain wrong.”

“I’ve wrestled with alligators. I’ve tussled with a whale. I done handcuffed lightning. And throw thunder in jail.”

“I’m so fast that last night I turned off the light switch in my hotel room and was in bed before the room was dark.”

“Put yourself out on a limb, sucka, like me!”

“It’s not bragging if you can back it up.”

“The fight is won or lost far away from the witnesses, behind the lines, in the gym, and out there on the road; long before I dance under those lights.”

“It isn’t the mountains ahead to climb that wear you out; it’s the pebble in your shoe.”

“My wealth is in my knowledge of self, love, and spirituality.”

“When you want to talk about who made me, you talk to me. Who made me, is me.”

“There are more pleasant things to do than beat up people.”

“Champions aren’t made in gyms.”

“It takes pride and tiger’s drive to build up the confidence, the ego the power to defeat an opponent in the ring.”

“You are as old as you think you are.”

Starter Story
Wanna see 52 business ideas you can start with less than $1,000?

...show you exactly how they built a business to thousands of customers.

That’s why we built Starter Story - the only place where 2,573 founders of successful businesses share with you their exact timeline of building their business to thousands of customers.

The community of DOERS

^ Yes, we asked 2,573 founders these questions. And we are asking more every day.

Industries, markets, and trends - you’ll get access to the world’s biggest, living, breathing database of 6,813 business ideas, side projects, and products to sell.

Based on data points from our 2,573 case studies, you'll find the 201 most effective ways that founders are growing their business right now.

At Starter Story, our goal is to help you make these decisions by giving you the information and answers you need - from 2,573 successful founders that already went through it firsthand.

Join 185,483 starters building the business of their dreams.
Free Want 52 business ideas you can start with less than $1,000?
To read this exclusive story, join Starter Story Premium!
Premium
Full access to case studies, filters, and business ideas database
$6.20 $3.44/week
Billed annually
Unlimited access
Unlock 2,573+ case studies
Find your next idea - 6,813 business ideas
Unlock 200+ growth playbooks
Filter, search & sort full database
Premium Plus
All access pass: All courses & guides to start your business
$12.82 $6.33/week
Billed annually
Everything in Premium
$50K+ in deals on tools
Access to hundreds of successful founders
1 on 1 mentorship for your business
Get the Lean SEO course
Questions? Check out our FAQ. Already a member? Sign in