Lisa Randall is an American theoretical physicist, cosmologist, and author.

Over the years, Lisa has written many books on the universe, the study of physics, and more. Some of her notable books are "Warped Passages: Unraveling the Mysteries of the Universe's Hidden Dimensions" and "Knocking on Heaven’s Door: How Physics and Scientific Thinking Illuminate the Universe and the Modern World" - both have been on New York Times 100 notable books lists.

We've put together an incredible collection of Lisa Randall quotes to read. 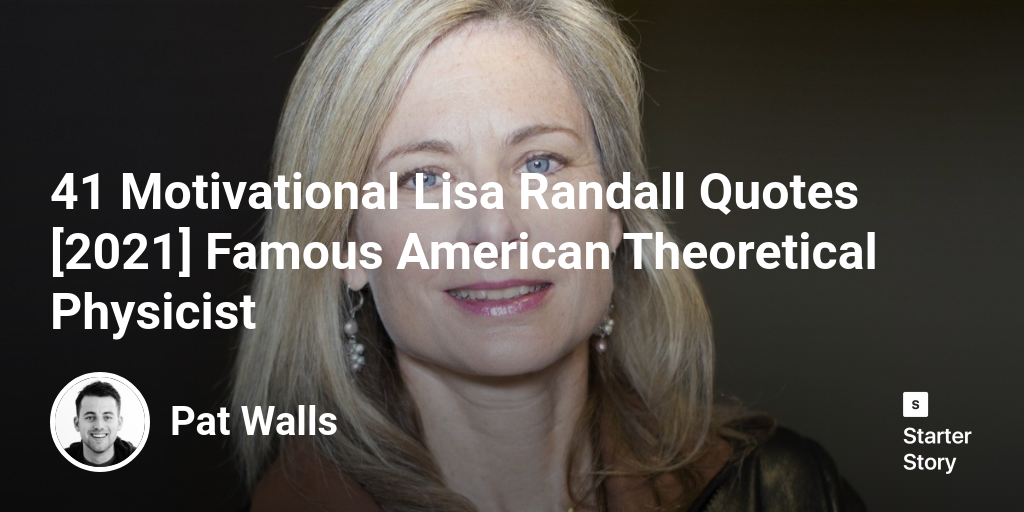 “Speculation and the exploration of ideas beyond what we know with certainty are what lead to progress.”

“You might find it hard to imagine gravity as a weak force, but consider that a small magnet can hold up a paper clip, even though the entire earth is pulling down on it.”

“Travel at faster than the speed of light certainly can have dramatic implications that are difficult to understand, such as time travel.”

“When people try to use religion to address the natural world, science pushes back on it, and religion has to accommodate the results. Beliefs can be permanent, but beliefs can also be flexible. Personally, if I find out my belief is wrong, I change my mind. I think that’s a good way to live.”

“Although I was first drawn to math and science by the certainty they promised, today I find the unanswered questions and the unexpected connections at least as attractive.”

“We certainly don’t yet know all the answers. But the universe is about to be pried open.”

“Secrets of the cosmos will begin to unravel. I, for one, can’t wait.”

“Probably if you look like Tyra Banks, it probably is hard, even if you are really smart, for people to take – it surprises some.”

“We should figure out how to do this so that some parents don’t feel disenfranchised, angry and upset. It says a lot about the state of where we are in the city, the role of parents and the reality of small school and combining schools.”

“Both religions and musicals work best with energetic and committed believers. Cynicism or detachment would have destroyed the magic – something true of religion, too.”

“Science certainly is not the static statement of universal laws we all hear about in elementary school. Nor is it a set of arbitrary rules. Science is an evolving body of knowledge. Many of the ideas we are currently investigating will prove to be wrong or incomplete. Scientific descriptions certainly change as we cross the boundaries that circumscribe what we know and venture into more remote territory where we can glimpse hints of the deeper truths beyond.”

“Early in the twentieth century, the physicist Lord Rutherford, best known for his landmark discovery of the atomic nucleus, famously pronounced, “All science is either physics or stamp collecting.”

“You can be only a modest distance away from the gravity brane, and gravity will be incredibly weak.”

“When I was in school I liked Math because all the problems had answers. Everything else seemed very subjective.”

“Lots of data gets collected through the latest technology today, and not all of it is about people’s consumer preferences.”

“Why should we have perfect senses that can directly perceive everything? The big lesson of physics over the centuries is how much is hidden from our view. From.”

“One reason I find anthropic reasoning troublesome is that no one yet knows what might be essential to any possible form of life or even to structures such as galaxies that might support it. I am not as confident as others seem to be that any form of life would be similar to ours.”

"If large extra dimensions solve the hierarchy problem, higher-dimensional gravity would become strong at about a TeV."

"But speculation is the only way to make progress in our understanding."

"A space of a particular dimension is a space requiring a particular number of quantities to specify a point."

"For two events separated in time, a geodesic is the natural path things would take in spacetime to connect one event to the other."

"Nonetheless, in all cases matter tells spacetime how to curve, and spacetime tells matter how to move."

"The uncertainty principle tells us that you need high-momentum particles to probe or influence physical processes at short distances, and special relativity relates that momentum to a mass."

“The universe has its secrets. Extra dimensions of space might be one of them. If so, the universe has been hiding those dimensions, protecting them, keeping them coyly under wraps. From a casual glance, you would never suspect a thing.”

“Creativity is essential to particle physics, cosmology, and to mathematics, and to other fields of science, just as it is to its more widely acknowledged beneficiaries – the arts and humanities.”

“I considered going into business or becoming a lawyer – not for the money, but for the thrill of problem-solving.”

“It’s hubris to think that the way we see things is everything there is.”

“All the normal matter in the Milky Way disc is denser than the dark matter that surrounds it.”

“Science is a combination of theory and experiment and the two together are how you make progress.”

“Basically, I wasn’t properly socialized, so it made sense to do physics.”

“When it comes to the world around us, is there any choice but to explore?”

“There is real confusion about what it means to be right and wrong – the difference between what spiritual beliefs are and what science is.”

“Scientific research involves going beyond the well-trodden and well-tested ideas and theories that form the core of scientific knowledge. During the time scientists are working things out, some results will be right, and others will be wrong. Over time, the right results will emerge."

“I had this illusion that if I kind of dressed badly that I wouldn’t stand out. So I actually went out of my way to not look different to the extent I could.”

“We often fail to notice things that we are not expecting.”

“An almost indispensable skill for any creative person is the ability to pose the right questions. Creative people identify promising, exciting, and, most important, accessible routes to progress – and eventually formulate the questions correctly.”

“Maybe dark matter is denser than we usually assume, kind of like the Milky Way plane.”

"Thank you for creating this. It's refreshing to see how real founders grow their business."
Enter your email to get started.
Get a list of top channel names
To read this exclusive story, join Starter Story Premium!
Premium
Full access to case studies, filters, and business ideas database
$6.20 $2.67/week
Billed annually
Unlimited access
Unlock 2,445+ case studies
Find your next idea - 6,694 business ideas
Unlock 200+ growth playbooks
Filter, search, export full database
Premium Plus
All access pass: All courses & guides to start your business
$12.82 $5.75/week
Billed annually
Everything in Premium
$50K+ in deals on tools
Access to hundreds of successful founders
1 on 1 mentorship for your business
Get the Lean SEO course
Questions? Check out our FAQ. Already a member? Sign in