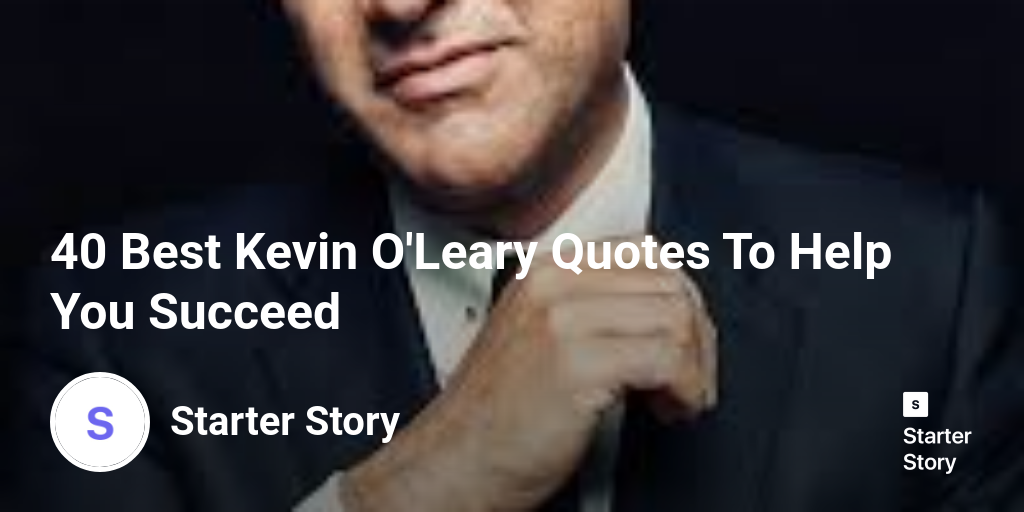 Known as "Mr. Wonderful" to Shark Tank nation, Kevin O'Leary is a famous entrepreneur and investor.

He also has quite a bit of advice to give when it comes to business and how you should be spending your time.

We put together 40 best quotes from Kevin O'Leary.

“I want to go to bed richer than when I woke up. The pursuit of wealth is a wonderful thing, but the thing is you have to be honest about it, you have to tell the truth.” – Kevin O’Leary

“There is a discipline required as an entrepreneur about working to optimize the business. There is no balance in life as an entrepreneur. You can’t expect to work 9 to 5 that’s never going to happen. You have to expect that it is going to consume your life for a period of time. That’s the downside, but the upside is that you buy yourself freedom in perpetuity.” – Kevin O’Leary

“When I start something I bring my A-game – I assume I’m going to win.” – Kevin O’Leary 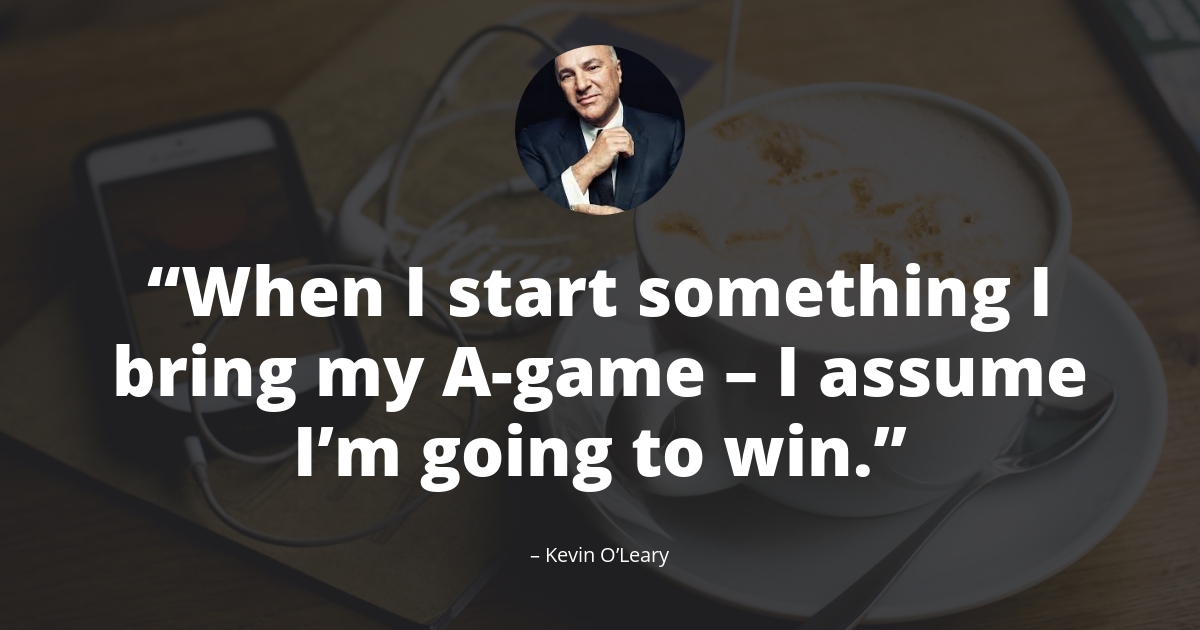 “What are the most important qualities that make a successful entrepreneur? The ability to communicate. The ability to express your idea with certainty. That’s how you become a leader even if you are unsure, your ability to explain your vision and your direction is the attribute you need the most. Articulate your idea in 90 seconds or less.” – Kevin O’Leary

“Money is my military, each dollar a soldier. I never send my money into battle unprepared and undefended. I send it to conquer and take currency prisoner and bring it back to me.” – Kevin O’Leary

“So much of life is a negotiation – so even if you’re not in business, you have opportunities to practice all around you.” – Kevin O’Leary

“I actually think being an entrepreneur is a state of mind. If you’re going to be an entrepreneur, my thesis is that you have to sacrifice everything for some period in your life to be successful. You have to be myopic and completely focused and unbalanced in every way. Once you’ve achieved success, you’re free to do whatever you like.” – Kevin O’Leary

“The definition of leadership is that you have to find great people and ask them to do extraordinary things. I’ve been doing that my whole life.” – Kevin O’Leary 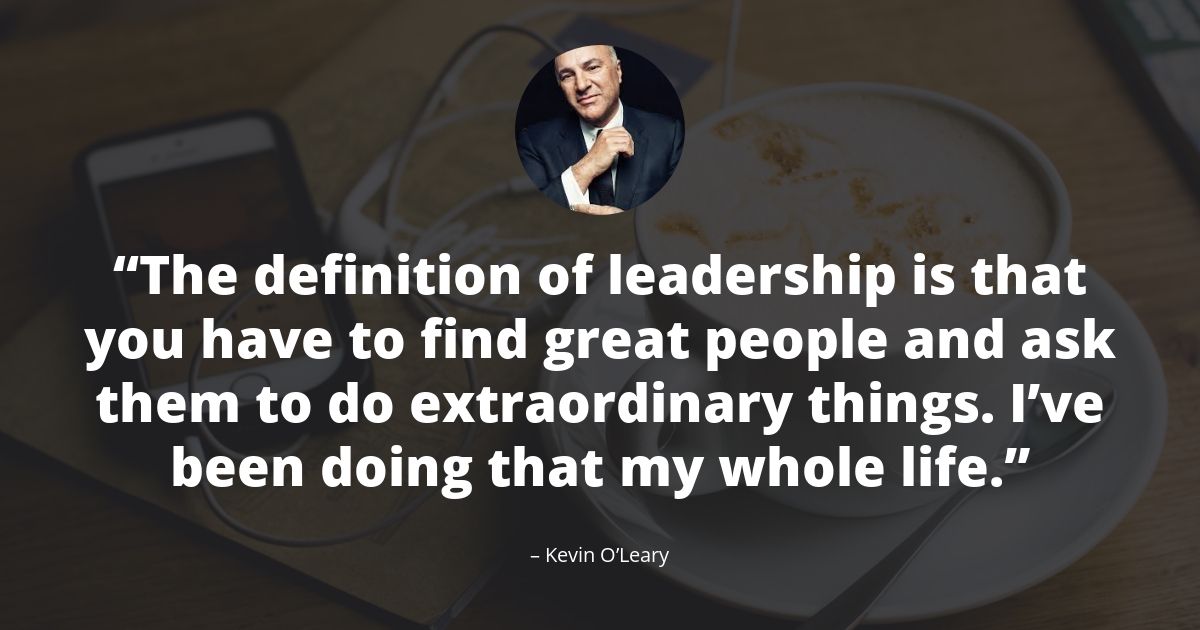 “I like to take risks. That’s how I make money. But they are calculated risks.” – Kevin O’Leary 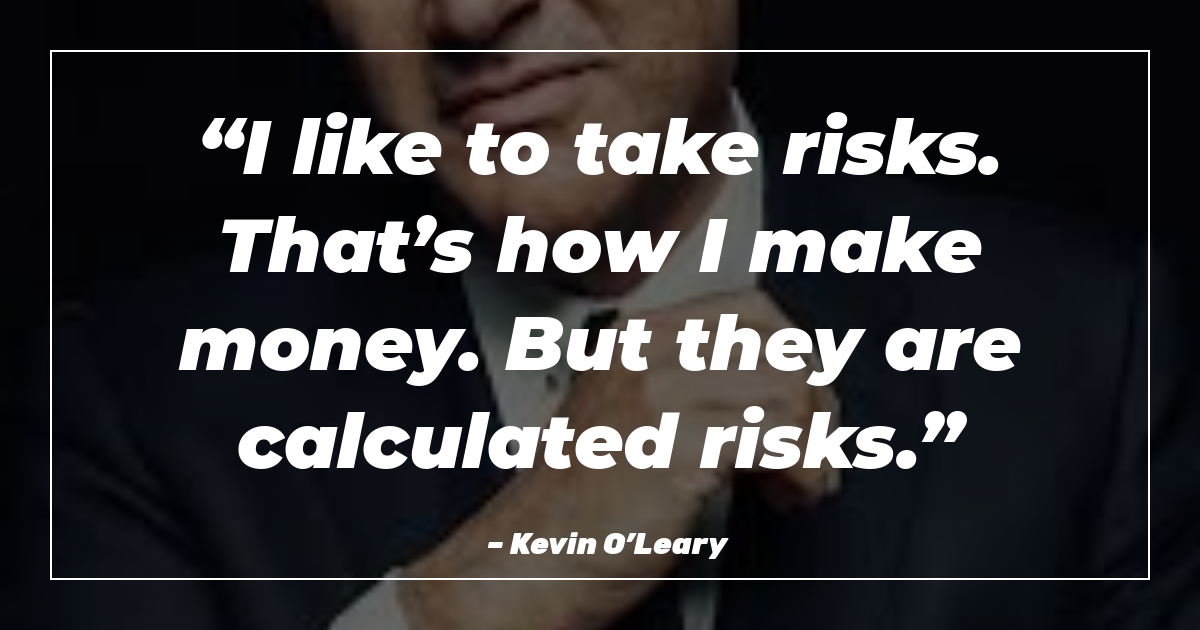 “Imagine how foolish you’d look if, like one clever salesman who once pitched to me, you tried to license your product to a big industry player without knowing they just launched a competing product. With the right background research, he could have avoided that and other landmines – and so can you.” – Kevin O’Leary

“You’d rather own gold; never own the miner.” – Kevin O’Leary 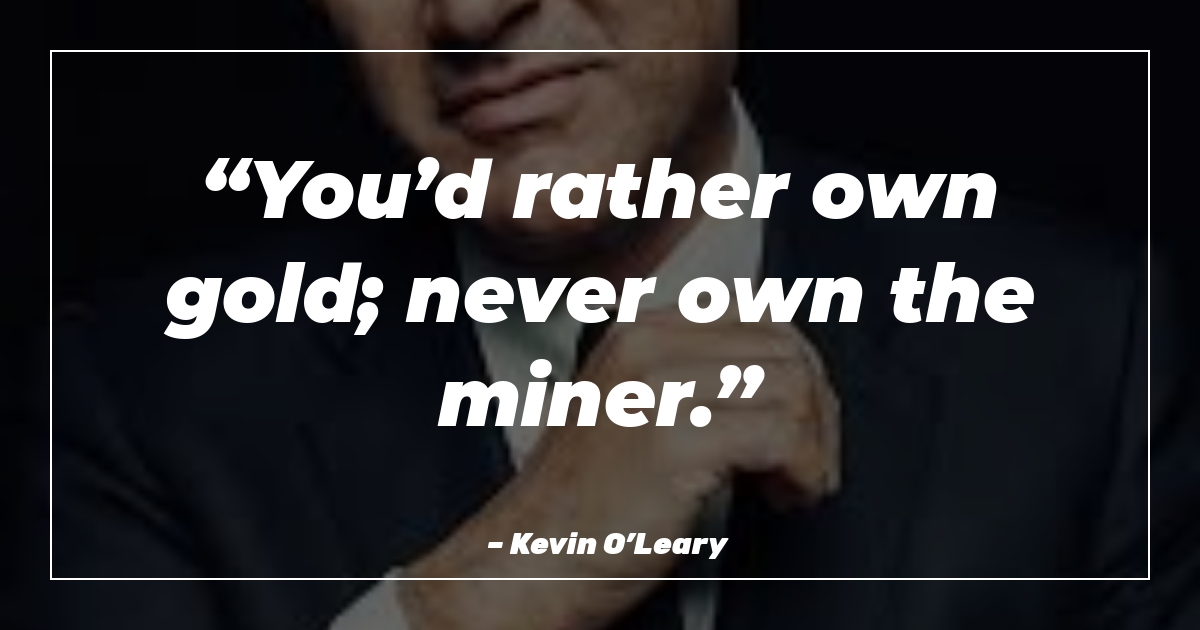 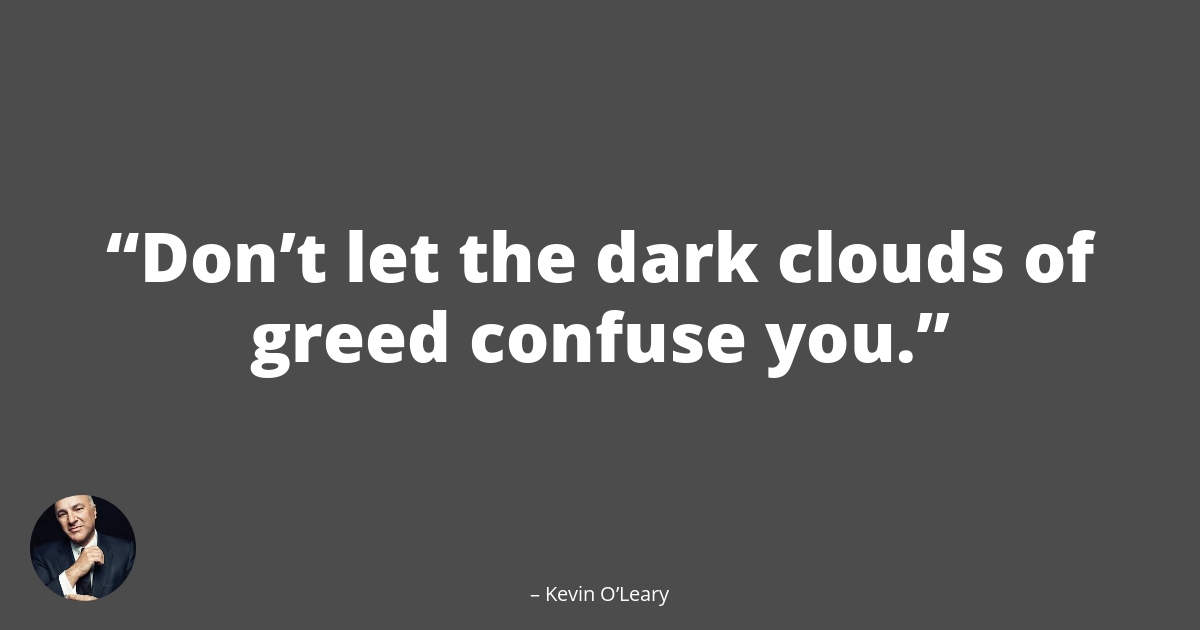 “The biggest mistake entrepreneurs can make is trying to do everything themselves. They usually blow up when they try. I did an inventory of every deal I’ve ever done and it turned out that every single deal I made money on was a partnership, and every colossal failure, where I lost millions, was something I tried to do by myself.” – Kevin O’Leary

“Working 24 hours a day isn’t enough anymore. You have to be willing to sacrifice everything to be successful, including your personal life, your family life, maybe more. If people think it’s any less, they’re wrong, and they will fail.” – Kevin O’Leary

“I’d rather invest in an entrepreneur who has failed before than one who assumes success from day one.” – Kevin O’Leary 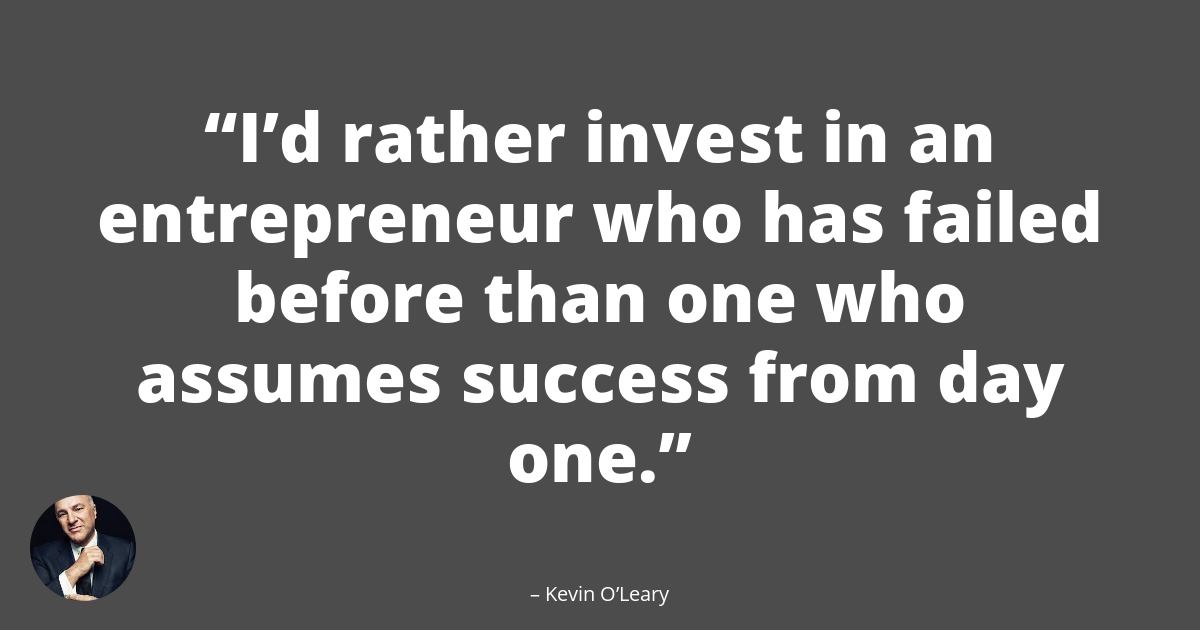 “Don’t cry about money, it never cries for you.” – Kevin O’Leary

“My partners … taught me that in order to create wealth, I needed to pair up with people whose strengths compensated for my weaknesses.” – Kevin O’Leary

“I never, ever, ever let emotion get in the way of an investment.” – Kevin O’Leary 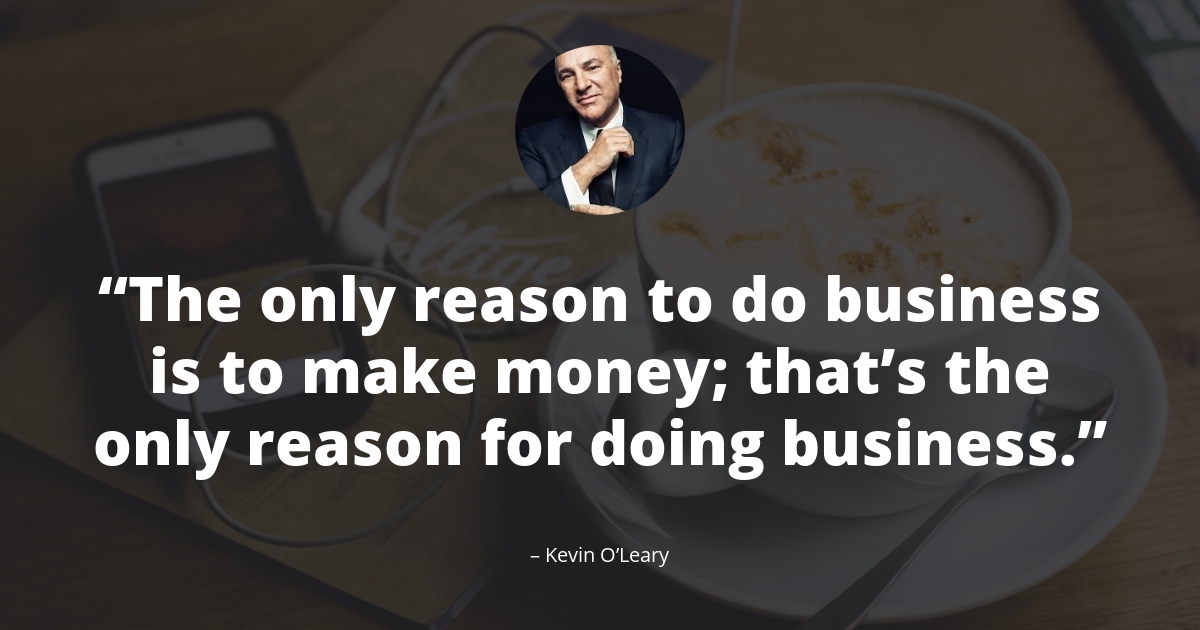 “Business is war. I go out there, I want to kill the competitors. I want to make their lives miserable. I want to steal their market share. I want them to fear me and I want everyone on my team thinking we’re going to win.” – Kevin O’Leary

“Nobody has a monopoly on good ideas.” – Kevin O’Leary “Here’s how I think of my money – as soldiers – I send them out to war everyday. I want them to take prisoners and come home, so there’s more of them.” – Kevin O’Leary 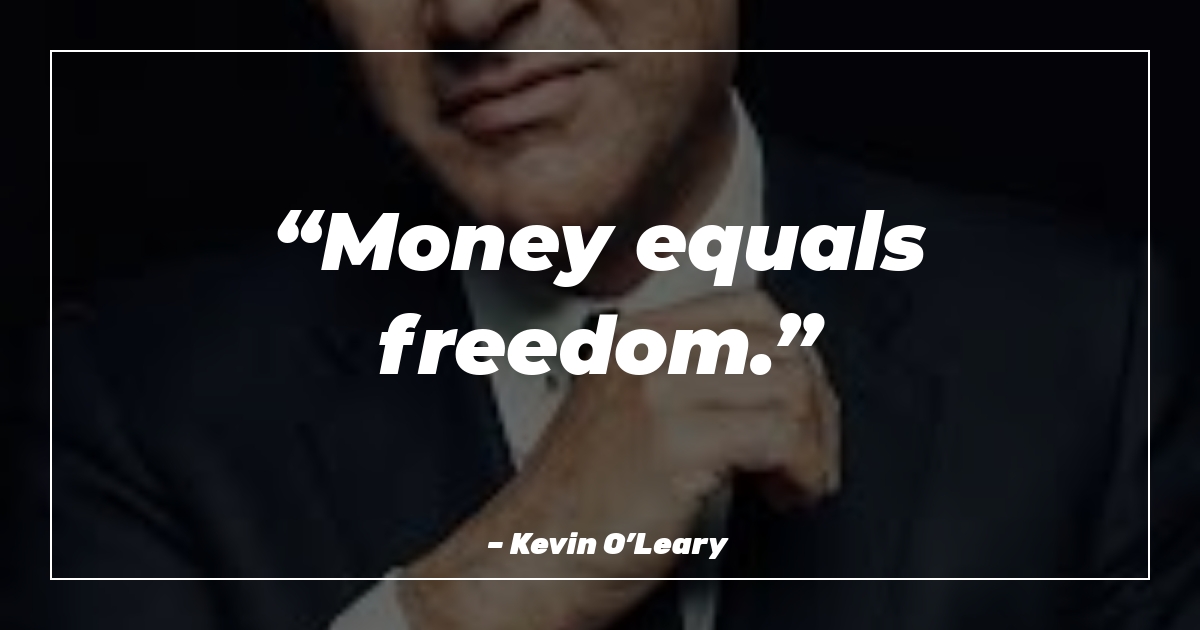 “You may lose your wife, you may lose your dog, your mother may hate you. None of those things matter. What matters is that you achieve success and become free. Then you can do whatever you like.” – Kevin O’Leary

“Know everything about the companies and people you are going to be negotiating with. Insist on getting the names of everyone participating in the negotiations. Leave no stone unturned; find out as much as you can.” – Kevin O’Leary 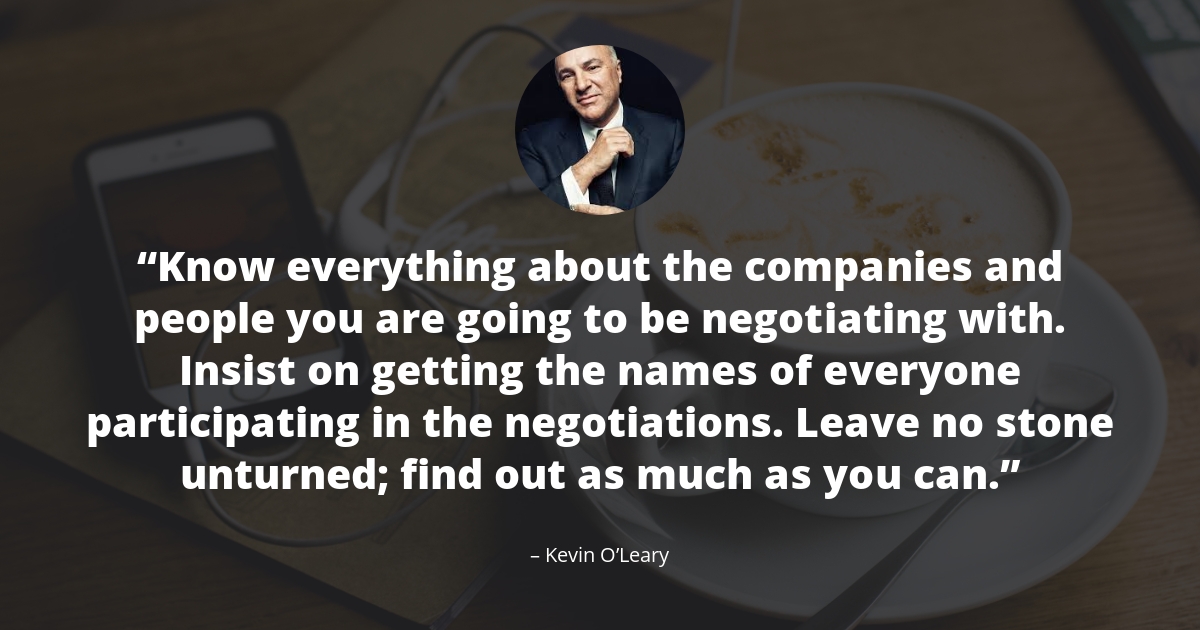 “The best motivator in the world is money and if that doesn’t work try more money.” – Kevin O’Leary “Downturns are the best time to start businesses, because you develop discipline that’s very lean and mean in terms of how to spend money. And those habits serve you very well in good times.” – Kevin O’Leary

“I have met many entrepreneurs who have the passion and even the work ethic to succeed – but who are so obsessed with an idea that they don’t see its obvious flaws. Think about that. If you can’t even acknowledge your failures, how can you cut the rope and move on?” – Kevin O’Leary

“Assholes get rich because they’re not afraid to ask for what they want.” – Kevin O’Leary 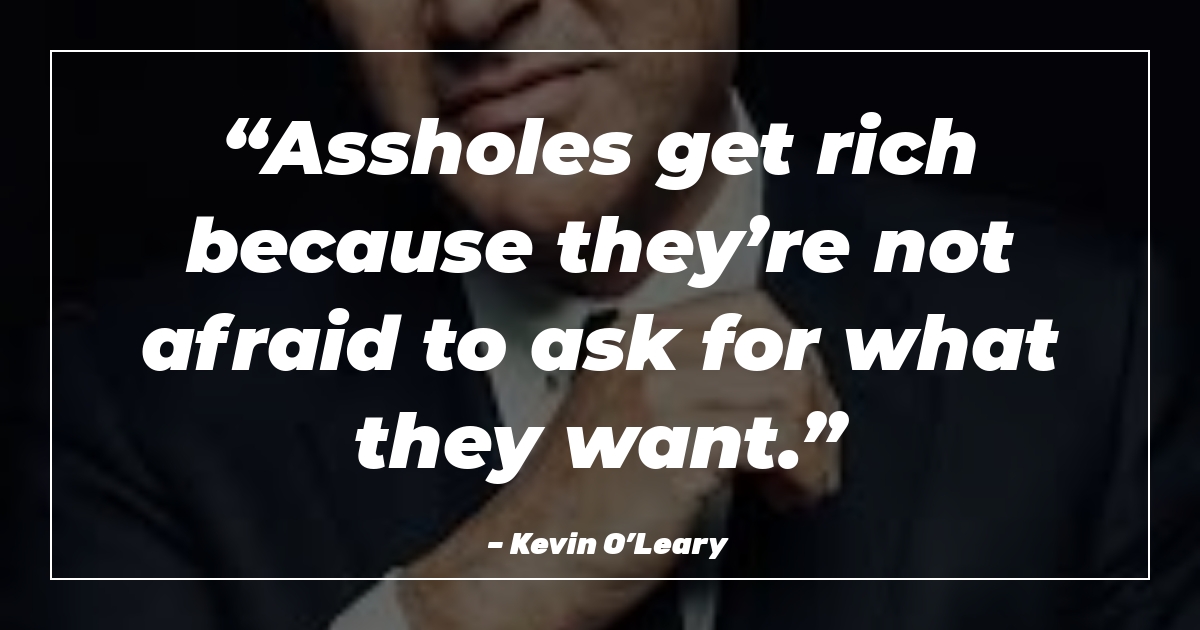 “I have had some great successes and great failures. I think every entrepreneur has. I try to learn from all of them.” – Kevin O’Leary “Vision is nothing without a plan to execute it.” – Kevin O’Leary 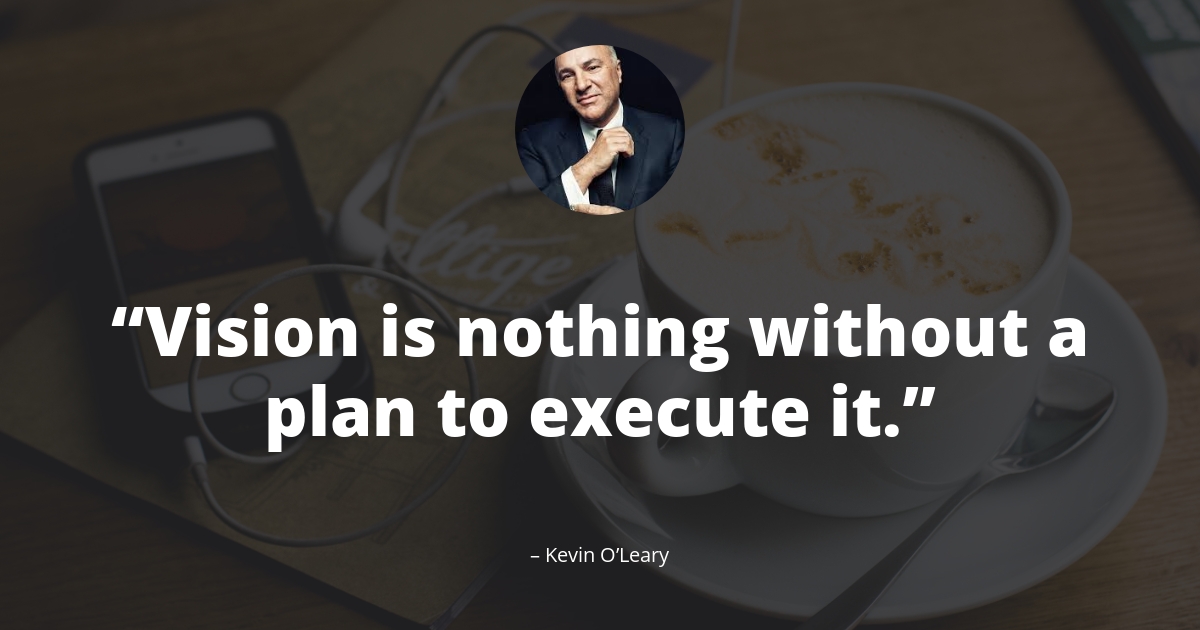 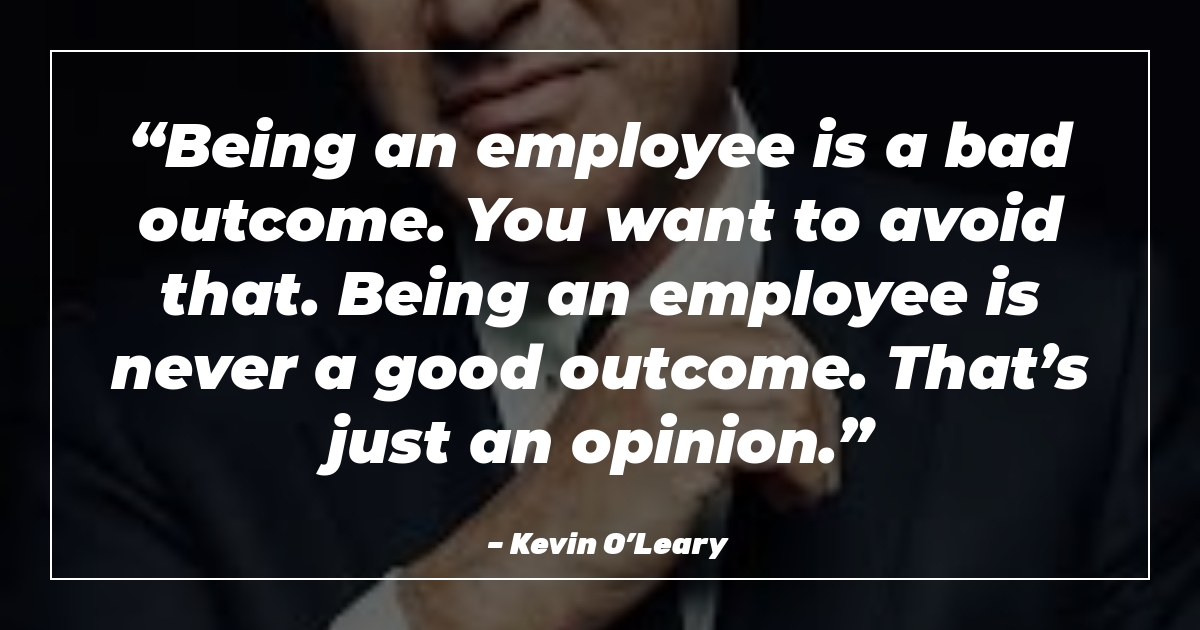 “Nobody forces you to work at Wal-Mart. Start your own business! Sell something to Wal-Mart!” – Kevin O’Leary 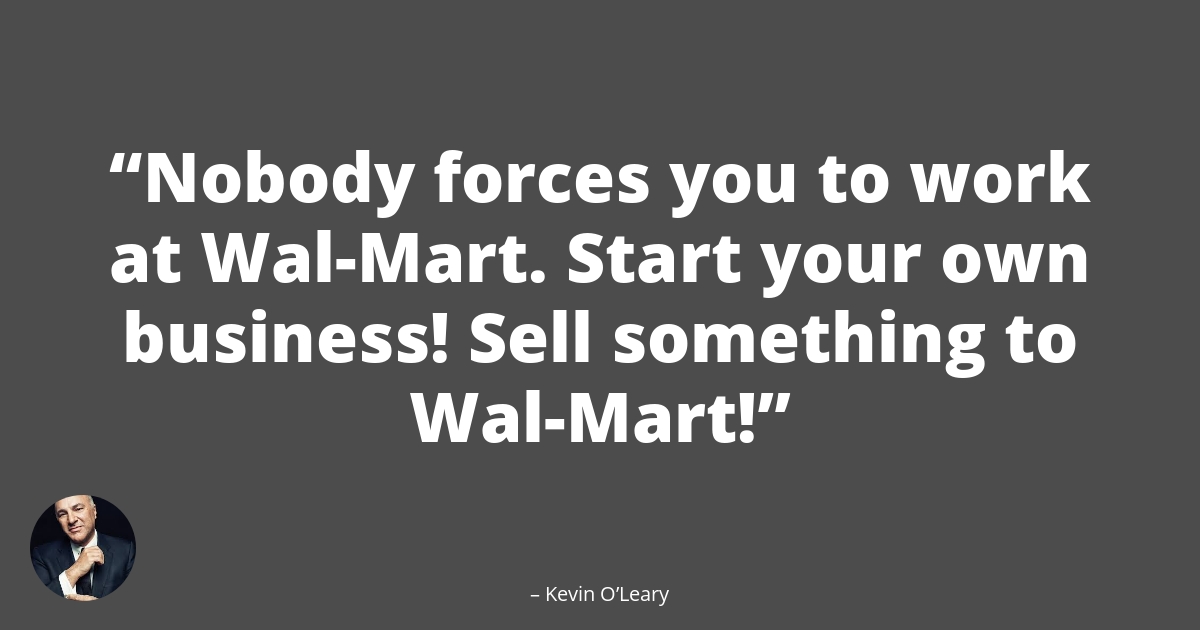 “Money has no grey areas. You either make it or you lose it.” – Kevin O’Leary 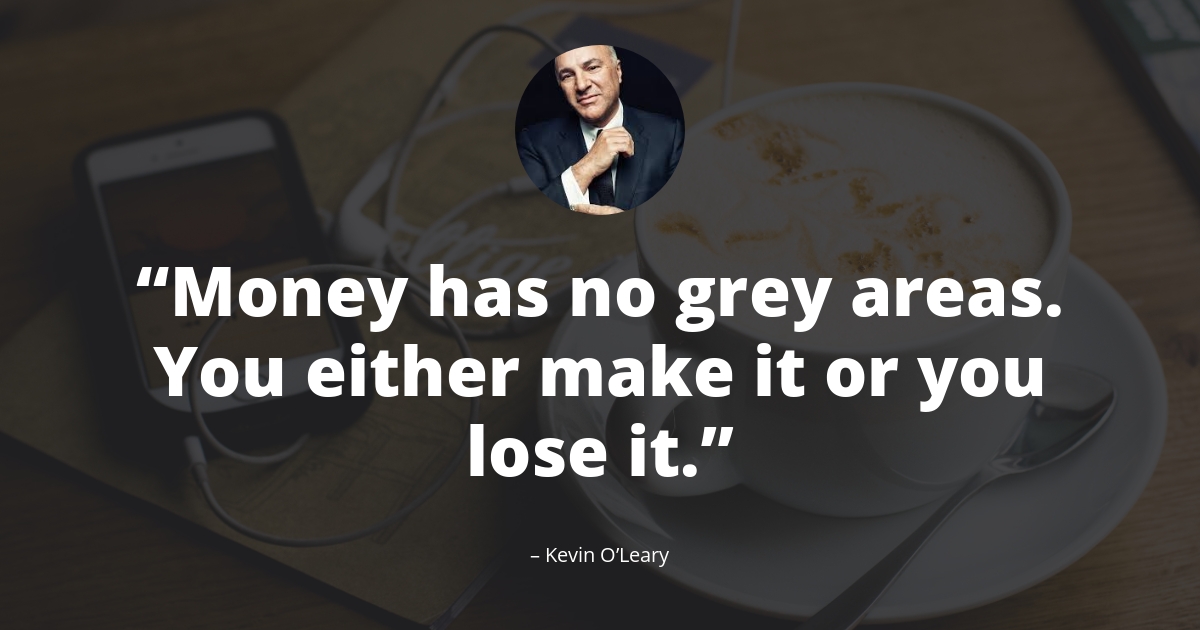 “We need physical exercise to prepare our brain for long periods of concentration.” – Kevin O’Leary “Whatever you pay attention to grows!” – Kevin O’Leary 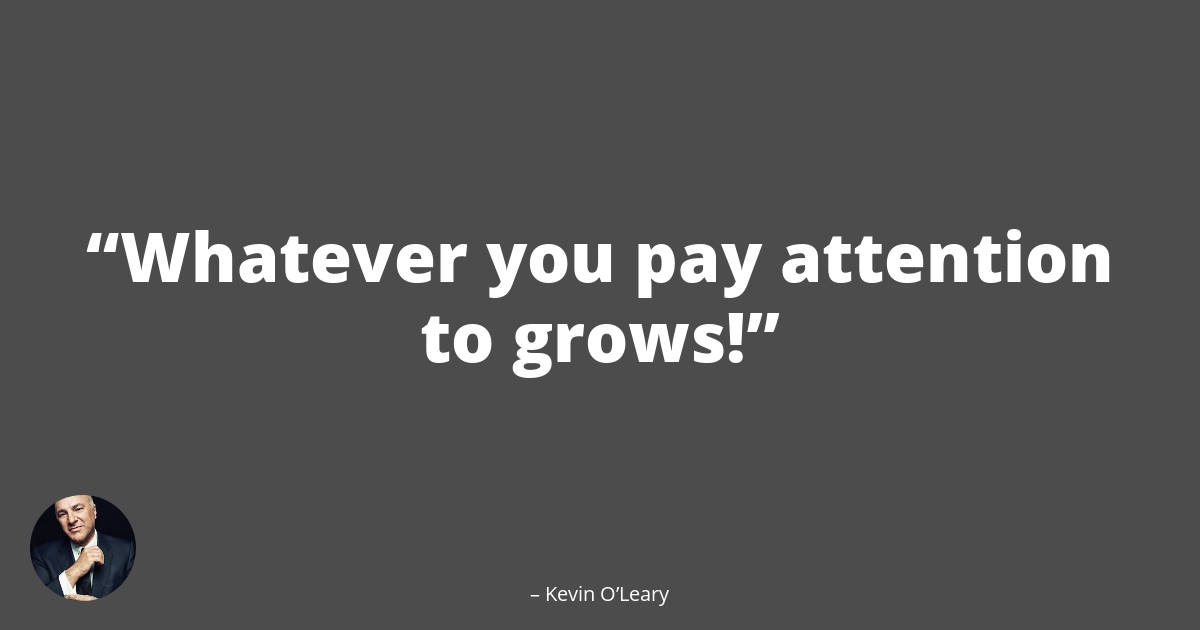 “I see negotiations as an honest attempt to reach a deal that’s great for everyone at the table. But sometimes, for whatever reason, that’s impossible. You need to accept that possibility-don’t make a deal for the sake of making a deal. If you do, chances are it will fall apart later anyway, with costs and headaches for everyone involved. And once you walk away, don’t come back.” – Kevin O’Leary

“I’m not planning on giving my kids any of my wealth. They know when their education is over, I’m pushing them out of the nest. The bird you see dead under the nest is the one who didn’t think about the future.” – Kevin O’Leary

Looking to start a business?
We put together 20 businesses you can start from home. Join our free weekly newsletter and get them right now.

You might also like:
How To Come Up With An Idea For Your Business
Starter Story
Designing and Prototyping A Product
Starter Story
50 Lucrative Ways to Make Money on the Side
Samantha Walls
Become a premium member to get full access.
Ready to bring your idea to life?
Join Starter Story to get the greatest companion to starting and growing your business.

How a food blog grew a niche audience to over 35,000 active subscribers
$50K+ in savings
Access to hundreds of the best tools to run your business. Including: $5,000 in AWS credits, $1000 Airtable credit, $1,000 in Notion credits, $1,000 in Miro credits, $10K in transactions without Stripe fees, 12 months free on SendGrid, 6 months free on Zendesk, Typeform, 50% off Quickbooks, Hotjar, Algolia, and hundreds of other tools.
3K+
case studies
102K
subscribed
400+
hours of content
5M
visitors

"Thank you for creating this. It's refreshing to see how real founders grow their business."
Enter your email to get started.
To read this exclusive story, join Starter Story Premium!
Premium
Full access to case studies, filters, and business ideas database
$6.20 $2.67/week
Billed annually
Unlimited access
Unlock 3,500+ case studies
Find your next idea - 5,111 business ideas
Unlock 200+ growth playbooks
Filter, search, export full database
Premium Plus
All access pass: All courses & guides to start your business
$12.82 $5.75/week
Billed annually
Everything in Premium
$50K+ in deals on tools
Access to hundreds of successful founders
1 on 1 mentorship for your business
Get the Lean SEO course
Questions? Check out our FAQ