James Altucher is an american hedge-fund manager, author and podcaster.

He is an entrepreneur who has been founded or cofounded over 20 companies.

He is an author of over 20 books and well-known for Choose Yourself and an inspiring contributor to publications including The Financial Times, The Wall Street Journal, TechCrunch, and The Huffington Post.

He was a seed investor in Buddy Media, which later sold to CRM company named Salesforce.com for "$745 million in 2012."

We've put together an incredible collection of James Altucher quotes to read. 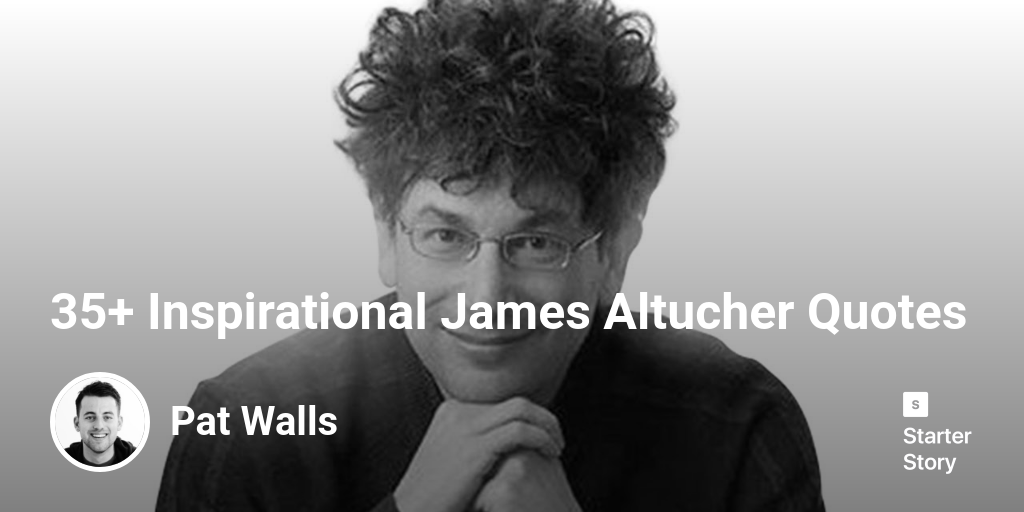 “Only think about the people you enjoy, and only read the books you enjoy, that make you happy to be human. Only go to the events that actually make you laugh or fall in love.” – James Altucher

“If coming up with ten ideas sounds too hard, then come up with twenty.” – James Altucher

“What you need to do is build the house you will live in. You build that house by laying a solid foundation: by building physical, emotional, mental, and spiritual health.” – James Altucher

“The best way I have ever found to fill that hole is not to seek external motivations to fill the emptiness, but to ignite the internal fire that will never go out. To light up my own inner sky.” – James Altucher

“Nobody wakes up in the morning and says, ‘I can’t wait to clean out some shit today.” – James Altucher

“Luck is created by the prepared.” – James Altucher

“This is about a new phase in history where art, science, business, and spirit will join together, both externally and internally, in the pursuit of true wealth. It’s a phase where ideas are more important than people.” – James Altucher

"Honesty is the fastest way to prevent a mistake from turning into a failure." – James Altucher

“Someone who is reinventing always has spare time. Part of reinvention is collecting little bits and pieces of time and carving them the way you want them to be.” – James Altucher

“I have lots of ideas. How do I pick the right one? Execute on as many as possible. The right idea will pick you.” – James Altucher

“Perfectionism is the enemy of the idea muscle. Perfectionism is your brain trying to protect you from harm—from coming up with an idea that is embarrassing and stupid and could cause you to suffer pain.” – James Altucher

“The only truly safe thing you can do is to try over and over again. To go for it, to get rejected, to repeat, to strive, to wish. Without rejection there is no frontier, there is no passion, and there is no magic.” – James Altucher

“When you get in the mud with a pig, you get dirty and the pig gets happy.” – James Altucher

“But business is just a vehicle for transforming the ideas in your head into something real, something tangible, that actually improves the lives of others.” – James Altucher

“Ultimately, the best speakers are the ones who have put 10,000 hours into listening.” – James Altucher

"The American Dream never really existed. It was a marketing scam." – James Altucher

“Only free time, imagination, creativity, and an ability to disappear will help you deliver value that nobody ever delivered before in the history of humankind.” – James Altucher

“The only things that really matter in this world are the relationships you have with the people you love, and the meaningful things that you do.” – James Altucher

“When you rush to get to a mythical there, one day you will arrive and realize you missed all of the pleasures and mysteries along the way.” – James Altucher

“When you give up searching for frontiers, inevitably you end up stuck in a swamp, sinking deeper into the mud the more you struggle to get out.” – James Altucher

“Stick with the people who love you and don’t spend a single second on the rest. Life will be better that way.” – James Altucher

“Honesty is about the scars. It's about the blemishes. But it's more than just bragging about failure, which could be a form of ego. It's about truly helping people.” – James Altucher

“Excuses are leaks in a boat. When you cover one, another pops up, and it’s even bigger. It’s hard to keep the boat repaired and get safely to shore if you have an excuse mind-set.” – James Altucher

"Do what you do with love, and success is a natural symptom." – James Altucher

“Only worry about your own happiness, which doesn’t have to be limited by anyone else’s stupidity unless you allow it to be.” – James Altucher

“Excuses are easy lies we tell ourselves to cover up our failures.” – James Altucher

“Forget purpose. It’s okay to be happy without one. The quest for a single purpose has ruined many lives.” – James Altucher

“In every business I had ever started, even ones that had totally failed, I had kept good relations with the investors.” – James Altucher

“He took a survey of personal finance authors who recommend that people keep budgets, and he found that none of them actually kept budgets themselves.” – James Altucher

“Always say to yourself, I’d rather be healthy than right. Because the infection of someone so wounded will spread to you if you engage.” – James Altucher

“We all want to de-clutter. To throw things out. But a minimalist lifestyle is bullshit unless you can do it across every sheath in the daily practice: not just physical, but also emotional, mental, and spiritual.” – James Altucher

This is not an online course. It's a database of 2,366 successful businesses, and growing.

How a food blog grew a niche audience to over 35,000 active subscribers
$50K+ in savings
Access to hundreds of the best tools to run your business. Including: $5,000 in AWS credits, $1000 Airtable credit, $1,000 in Notion credits, $1,000 in Miro credits, $10K in transactions without Stripe fees, 12 months free on SendGrid, 6 months free on Zendesk, Typeform, 50% off Quickbooks, Hotjar, Algolia, and hundreds of other tools.
2K+
case studies
149K
subscribed
1K+
hours of content
8M
visitors

"Thank you for creating this. It's refreshing to see how real founders grow their business."
Enter your email to get started.
To read this exclusive story, join Starter Story Premium!
Premium
Full access to case studies, filters, and business ideas database
$6.20 $2.67/week
Billed annually
Unlimited access
Unlock 2,366+ case studies
Find your next idea - 6,610 business ideas
Unlock 200+ growth playbooks
Filter, search, export full database
Premium Plus
All access pass: All courses & guides to start your business
$12.82 $5.75/week
Billed annually
Everything in Premium
$50K+ in deals on tools
Access to hundreds of successful founders
1 on 1 mentorship for your business
Get the Lean SEO course
Questions? Check out our FAQ. Already a member? Sign in