She won and was elected as the first female senator from New York and became the first lady to simultaneously hold elected office, and then the first former First lady to serve in the Senate In the year 2000.

We've put together an incredible collection of Hillary Clinton quotes to read. 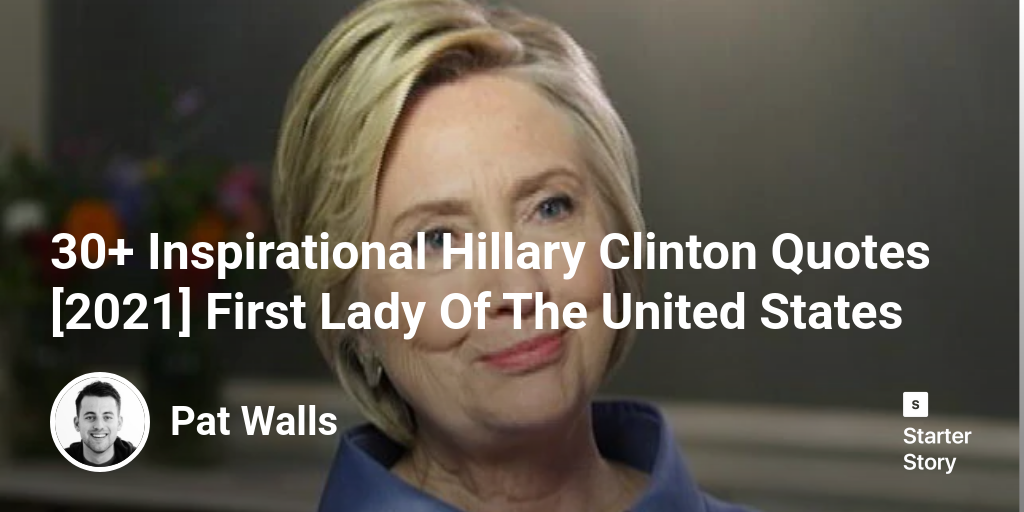 Don't let anybody tell you that it's corporations and businesses that create jobs.

People should meet an acceptable threshold of appropriateness. But for many women in the public eye, it just seems that the burden is so heavy.

I really do hope that we have a woman president in my lifetime.

Let's learn from the wisdom of every mother and father who teaches their daughters there is no limit on how big she can dream and how much she can achieve.

I look for people who have raw intelligence and a great work ethic and loyalty, and I can quickly identify people who have the right ingredients. But sometimes it is more difficult to get them to accept the fact that they can take on increasing responsibility. Oftentimes individuals will decide how far [they] go by how much work they're willing to put in and how quick they are to ask for help. Too many people have this deep-seated fear that if they ask for help, they will be thought less of.

Americans need a champion and I want to be that champion.

Keeping your head down and doing the best job you can, in the beginning, gives you the opportunity to be evaluated on the basis of the contributions you are making. [Then], when you feel strongly about your work or about a position, you'll be given more attention [than] if you hadn't done that constantly.

The worst thing that can happen in a democracy - as well as in an individual's life - is to become cynical about the future and lose hope.

There are many ways to be influential. You can work for politicians or in government and make a difference. And for young women who are interested in running for office, you just have to decide you're going to follow Eleanor Roosevelt's maxim about growing skin as thick as the hide of a rhinoceros, and you have to be incredibly well-prepared - better prepared [than a man], actually - and you have to figure out how you're going to present yourself, and you have to have a support group around you because it can be really a brutal experience.

Motown, Motown, that's my era. Those are my people.

Relationships are at the core of any political system and economic system - any family - and I think we drifted away from understanding that in our country. The people-to-people level is critical. It is ironic, though - we can text with anybody in the world, we can have a videoconference with anybody in the world, but [there should be] an even higher premium on showing up and getting to know someone.

My primary mission as President will be to create more opportunities and more good jobs with rising wages right here in the United States, from my first day in office to my last!

I believe America thrives when the middle class thrives.

It’s wrong to take tax breaks with one hand and give out pink slips with the other.

I believe in science. I believe that climate change is real and that we can save our planet while creating millions of good-paying clean energy jobs.

In America, if you can dream it, you should be able to build it.

Dignity does not come from avenging insults, especially from the violence that can never be justified. It comes from taking responsibility and advancing our common humanity.

God bless the America we are trying to create.

I have to confess that it's crossed my mind that you could not be a Republican and a Christian.

Women are the largest untapped reservoir of talent in the world.

In too many instances, the march to globalization has also meant the marginalization of women and girls. And that must change.

Voting is the most precious right of every citizen, and we have a moral obligation to ensure the integrity of our voting process.

We are Americans, We have the right to participate and debate any administration.

Our lives are a mixture of different roles. Most of us are doing the best we can to find whatever the right balance is For me, that balance is family, work, and service.

I will fight against the division politics of revenge and retribution. If you put me to work for you, I will work to lift people up, not put them down.

How a food blog grew a niche audience to over 35,000 active subscribers
$50K+ in savings
Access to hundreds of the best tools to run your business. Including: $5,000 in AWS credits, $1000 Airtable credit, $1,000 in Notion credits, $1,000 in Miro credits, $10K in transactions without Stripe fees, 12 months free on SendGrid, 6 months free on Zendesk, Typeform, 50% off Quickbooks, Hotjar, Algolia, and hundreds of other tools.
2K+
case studies
160K
subscribed
1K+
hours of content
8M
visitors

"Thank you for creating this. It's refreshing to see how real founders grow their business."
Enter your email to get started.