Guy Raz is a famous journalist, correspondent, and radio host.

Currently, Guy Raz is working at National Public Radio. By The New York Times he is called "one of the most popular podcasters in history" also his podcasts have a combined monthly audience of 19.2 million which is one of the highest records.

Guy is the co-creator of three NPR programs: TED Radio Hour, How I Built This, and NPR's first-ever children's program, Wow in the World, co-hosted with Mindy Thomas.

We've put together an incredible collection of Guy Raz quotes to read. 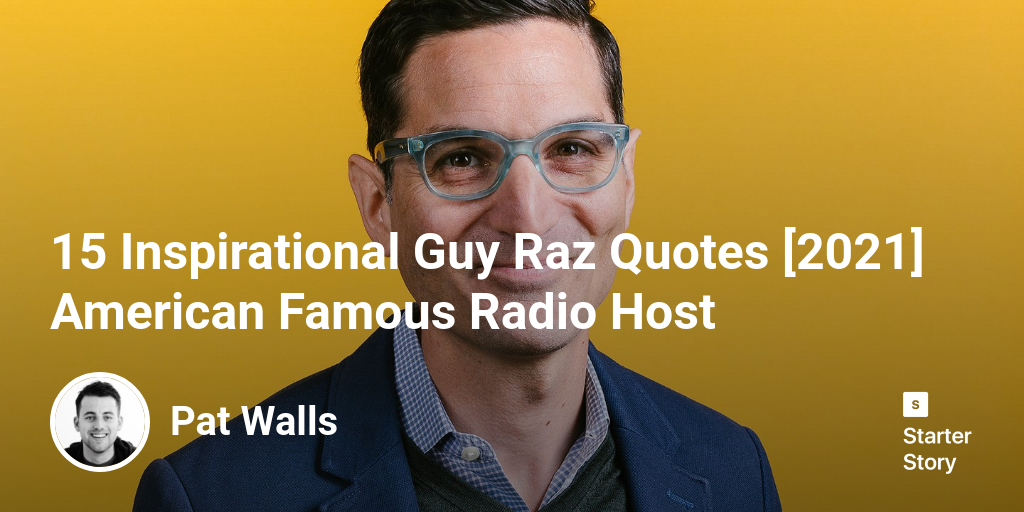 “Failing is scary. Wasting your life is dangerous.” – Guy Raz

“In my situation,” he said, it was “staying at BCG that was dangerous but not scary. The danger was continuing to do something that didn’t make me happy and getting to sixty-five years old and looking back and going, ‘Oh my God, I wasted my life.’” Failing is scary. Wasting your life is dangerous.” – Guy Raz

“was in the middle of his sixth year as a management consultant for Boston Consulting Group (BCG), already earning $250,000 per year (that’s more than $600K in 2020 dollars) before his thirty-fifth birthday.” – Guy Raz

“In 1984, the creator of Sam Adams beer, Jim Koch, was staring long and hard across the chasm. It was spring. It was the beginning of the baseball season in Boston, and it was about to be “morning in America.” Ronald Reagan was preparing for what would be a landslide reelection to the presidency, the economy had finally turned around after years in recession, the US Olympic team was about to run away from the competition at the Summer Games in Los Angeles, and Jim was in the middle of his sixth year as a management consultant for Boston Consulting Group (BCG), already earning $250,000 per year (that’s more than $600K in 2020 dollars) before his thirty-fifth birthday. By all accounts, Jim Koch had it made. His feet were planted securely on the terra firma of the business consulting world. “We flew first-class. You consulted with CEOs. Everyone treated you really well,” Jim recalled. These were interesting, heady times at BCG. The company had just become fully employee owned, complete with an employee stock ownership plan (ESOP) that forged a real path to truly significant wealth for consultants like Jim. At the same time, he had already worked alongside a quartet of future luminaries:” – Guy Raz

“It was a great job for a while,” Jim said with trademark understatement. For a while? At Jim’s salary, with the stock options still ahead of him, he was closing in on “pay off your parents’ mortgage and start a foundation” territory. What more could one person possibly want from a job? Well, for Jim Koch, it wasn’t about more; it was about different. In the beginning at BCG, Jim was being paid to learn about business strategy, product categories, organizational issues, and business problems. But once he entered management, his job became . . . well . . . boring. He was selling BCG’s services rather than diving into problems and finding solutions. “The learning stopped,” he said. “And then I had this epiphany. I asked myself, ‘Do I want to do this the rest of my life?’ And the answer came back: ‘No.’ And the corollary to that was, ‘Well, if I don’t want to do it for the rest of my life, I probably don’t want to do it tomorrow.” – Guy Raz

“A hero has a crazy idea; people doubt her; she leaves the village to pursue her vision, faces untold obstacles, falls into an abyss, barely escapes death, but manages to come out the other side with whatever she was looking for and continues on her journey to an eventual triumphant return.” – Guy Raz

“The only difference between them and you, at this moment, is that when opportunity presented itself, they went into the phone booth and put on the cape. They took the leap. That’s basically it.” – Guy Raz

"I quote this at least once a week to people!" – Guy Raz

“There’s a really famous professor at Harvard named Ron Heifetz [who] teaches a course on leadership. He has this concept where he basically looks at successful and highly effective leaders, and basically what they do is they’re able to kind of step out of their own bodies and stand on a proverbial balcony and look down at themselves in the situation they’re in.” – Guy Raz

“Entrepreneurship isn’t about the money, it’s about a sense of purpose.” – Guy Raz

“Stewart Butterfield, the founder of Slack, has a great explanation for what it means to be wealthy: You can go to a restaurant [and] order anything you want, you can basically go on vacation wherever you want, and you’re not worried about debt. … Basically, his argument is once those are taken care of, you are essentially wealthy.” – Guy Raz

“I think a lot of people imagine that you have a company and then you sell it, and then you’ve got a hundred million dollars and then you’re going to go lie on a beach in the Caribbean and sip Piña Coladas all day, right? The reality is if you did that, you would eventually become very depressed. … Most of the people I’ve interviewed, they want to work until the very end, … even when they have enough money for three generations behind them because it isn’t about the money.” – Guy Raz

“The reality is that success is not an endpoint. It’s not like you do something and then you wake up, and you blow the trumpet and say, ‘Dah dah dah dah! I’m successful!’ and that’s it.” – Guy Raz

“I think failure is just infinitely more interesting than success. … That’s really where people are at their most generous — when they’re really … talking about their failures. And it allows us to … get a window into their soul that we need to have to help us when we are struggling with failure.” – Guy Raz

“My definition of greatness is making sure that the people that you have the power to influence, inhabit, and live on this planet with kindness and a sense of responsibility. … I have one purpose: It is to, as best I can, instill … the values that I think are important, that I hold dear … in my children. … If they grew up and they are kind and responsible and good humans like that, I’ve done my job.” – Guy Raz

This is not an online course. It's a database of 2,366 successful businesses, and growing.

How a food blog grew a niche audience to over 35,000 active subscribers
$50K+ in savings
Access to hundreds of the best tools to run your business. Including: $5,000 in AWS credits, $1000 Airtable credit, $1,000 in Notion credits, $1,000 in Miro credits, $10K in transactions without Stripe fees, 12 months free on SendGrid, 6 months free on Zendesk, Typeform, 50% off Quickbooks, Hotjar, Algolia, and hundreds of other tools.
2K+
case studies
149K
subscribed
1K+
hours of content
8M
visitors

"Thank you for creating this. It's refreshing to see how real founders grow their business."
Enter your email to get started.
To read this exclusive story, join Starter Story Premium!
Premium
Full access to case studies, filters, and business ideas database
$6.20 $2.67/week
Billed annually
Unlimited access
Unlock 2,366+ case studies
Find your next idea - 6,610 business ideas
Unlock 200+ growth playbooks
Filter, search, export full database
Premium Plus
All access pass: All courses & guides to start your business
$12.82 $5.75/week
Billed annually
Everything in Premium
$50K+ in deals on tools
Access to hundreds of successful founders
1 on 1 mentorship for your business
Get the Lean SEO course
Questions? Check out our FAQ. Already a member? Sign in