Learn how thousands of people are earning up to $2.5M/month online.
30 Inspirational Gerald Ford Quotes [2021]

Gerald Ford, an American politician, served as the thirty-eighth president of the United States from the year 1974 to 1977.

He is well known for cutting inflation by more than half during his tenure. He wielded the power of the Presidential veto 55 times as a major weapon to battle inflation-saving American taxpayers over $9.2 billion in the process as Congress upheld 45 of the vetoes.

We've put together an incredible collection of Gerald Ford quotes to read. 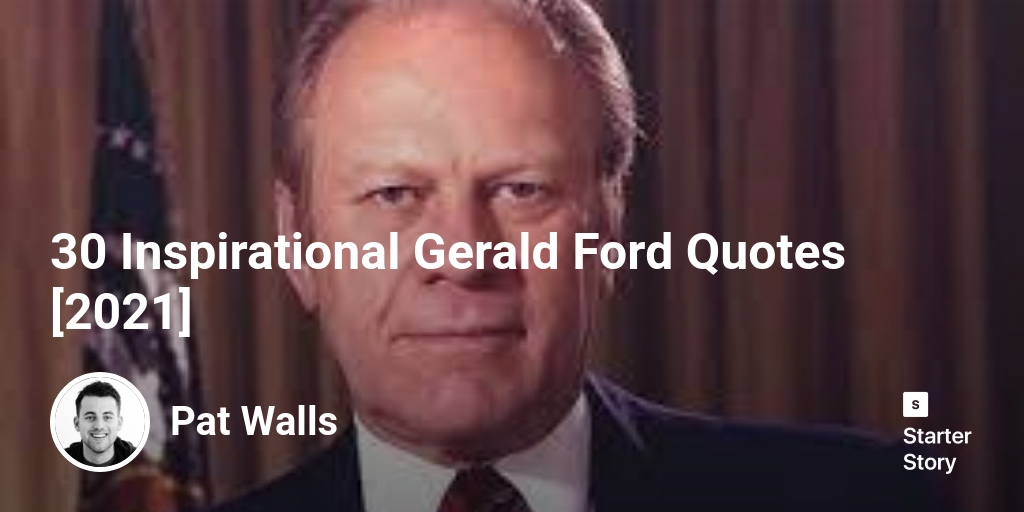 There is an old saying, The harder you try the luckier you get. I kind of like that definition of luck.”

There is no undertaking more challenging, no responsibility more awesome, than that of being a mother.”

I am acutely aware that you have not elected me as your President by your ballots, so I ask you to confirm me with your prayers.”

I believe that truth is the glue that holds government together, not only our government, but civilization itself.”

The spirit of seeking understanding through personal contact with people of other nations and other cultures deserves the respect and support of all.”

In all my public and private acts as your president, I expect to follow my instincts of openness and candor with full confidence that honesty is always the best policy in the end.”

It's the quality of the ordinary, the straight, the square, that accounts for the great stability and success of our nation. It's a quality to be proud of. But it's a quality that many people seem to have neglected.”

My commitment to the security and future of Israel is based upon basic morality as well as enlightened self-interest. Our role in supporting Israel honors our own heritage.”

We have come tardily to the tremendous task of cleaning up our environment. We should have moved with similar zeal at least a decade ago. But no purpose is served by post-mortems. With visionary zeal but the greatest realism, we must now address ourselves to the vast problems that confront us.”

Nothing in life is more important than the ability to communicate effectively.”

Music education opens doors that help children pass from school into the world around them - a world of work, culture, intellectual activity, and human involvement. The future of our nation depends on providing our children with a complete education that includes music.”

The three-martini lunch is the epitome of American efficiency. Where else can you get an earful, a bellyful and a snootful at the same time?”

I would like to deny all allegations by Bob Hope that during my last game of golf, I hit an eagle, a birdie, an elk and a moose.”

History and experience tell us that moral progress comes not in comfortable and complacent times, but out of trial and confusion.”

Even though this is late in an election year, there is no way we can go forward except together and no way anybody can win except by serving the people's urgent needs. We cannot stand still or slip backwards. We must go forward now together.”

The pat on the back, the arm around the shoulder, the praise for what was done right and the sympathetic nod for what wasn't are as much a part of golf as life itself.”

I know I am getting better at golf because I am hitting fewer spectators.”

All my children have spoken for themselves since they first learned to speak, and not always with my advance approval, and I expect that to continue in the future.”

For millions of men and women, the church has been the hospital for the soul, the school for the mind and the safe depository for moral ideas.”

Our great Republic is a government of laws and not of men. Here, the people rule.”

I had a lot of experience with people smarter than I am.”

I once told you that I am not a saint, and I hope never to see the day that I cannot admit having made a mistake. So I will close with another confession. Frequently, along the tortuous road of recent months from this chamber to the Presidents House, I protested that I was my own man. Now I realize that I was wrong. I am your man, for it was your carefully weighed confirmation that changed my occupation. The truth is I am the peoples man, for you acted in their name, and I accepted and began my new and solemn trust with a promise to serve all the people and do the best that I can for America.”

That, in part, is why the Constitution's framers gave justices life tenure ? to enable them to rule wherever the law and the Constitution led them, without obligation or fear of political reprisal. Former Republican president Gerald Ford recently paid tribute to John Paul Stevens, his only appointee to the Supreme Court, who is also far more liberal than Republicans expected. He has served his nation well, ... with dignity, intellect and without partisan political concerns.”

So much of what passes for public life consists of little more than candidates without ideas, hiring consultants without conviction, to stage campaigns without content. The result, increasingly, is elections without voters.”

Now, therefore, I, Gerald R. Ford, President of the United States, pursuant to the pardon power conferred upon me by Article II, Section 2, of the Constitution, have granted and by these presents do grant a full, free, and absolute pardon unto Richard Nixon for all offenses against the United States which he, Richard Nixon, has committed or may have committed or taken part in during the period from January 20, 1969 through August 9, 1974.”

The power and diversity of the Armed Forces, active Guard and Reserve, the resolve of our fellow citizens, the flexibility in our command to navigate international waters that remain troubled are all essential to our security.”

We must proceed with our own energy development. Exploitation of domestic petroleum and natural gas potentialities, along with nuclear, solar, geothermal, and non-fossil fuels is vital. We will never again permit any foreign nation to have Uncle Sam over a barrel of oil.”

Starter Story
Wanna see 52 business ideas you can start with less than $1,000?

This is not an online course. It's a database of 2,562 successful businesses, and growing.

Discover how 2,562 founders built their business to success

Find it in our database of 6,721 business and product ideas.

How a food blog grew a niche audience to over 35,000 active subscribers
$50K+ in savings
Access to hundreds of the best tools to run your business. Including: $5,000 in AWS credits, $1000 Airtable credit, $1,000 in Notion credits, $1,000 in Miro credits, $10K in transactions without Stripe fees, 12 months free on SendGrid, 6 months free on Zendesk, Typeform, 50% off Quickbooks, Hotjar, Algolia, and hundreds of other tools.
2K+
case studies
180K
subscribed
1K+
hours of content
8M
visitors

"Thank you for creating this. It's refreshing to see how real founders grow their business."
Join 179,795 starters building the business of their dreams.
Free Want 52 business ideas you can start with less than $1,000?
To read this exclusive story, join Starter Story Premium!
Premium
Full access to case studies, filters, and business ideas database
$6.20 $3.44/week
Billed annually
Unlimited access
Unlock 2,562+ case studies
Find your next idea - 6,721 business ideas
Unlock 200+ growth playbooks
Filter, search & sort full database
Premium Plus
All access pass: All courses & guides to start your business
$12.82 $6.33/week
Billed annually
Everything in Premium
$50K+ in deals on tools
Access to hundreds of successful founders
1 on 1 mentorship for your business
Get the Lean SEO course
Questions? Check out our FAQ. Already a member? Sign in