Elon Musk does the impossible.

His mind operates unlike any entrepreneur - and he is not afraid to take risks and turn his dreams into reality.

We put together 50 brilliant quotes from Elon Musk that will inspire you to take on your greatest dreams:

"I don't believe in process. In fact, when I interview a potential employee and he or she says that 'it's all about the process,' I see that as a bad sign. The problem is that at a lot of big companies, process becomes a substitute for thinking. You're encouraged to behave like a little gear in a complex machine. Frankly, it allows you to keep people who aren't that smart, who aren't that creative."

"I always invest my own money in the companies that I create. I don't believe in the whole thing of just using other people's money. I don't think that's right. I'm not going to ask other people to invest in something if I'm not prepared to do so myself." 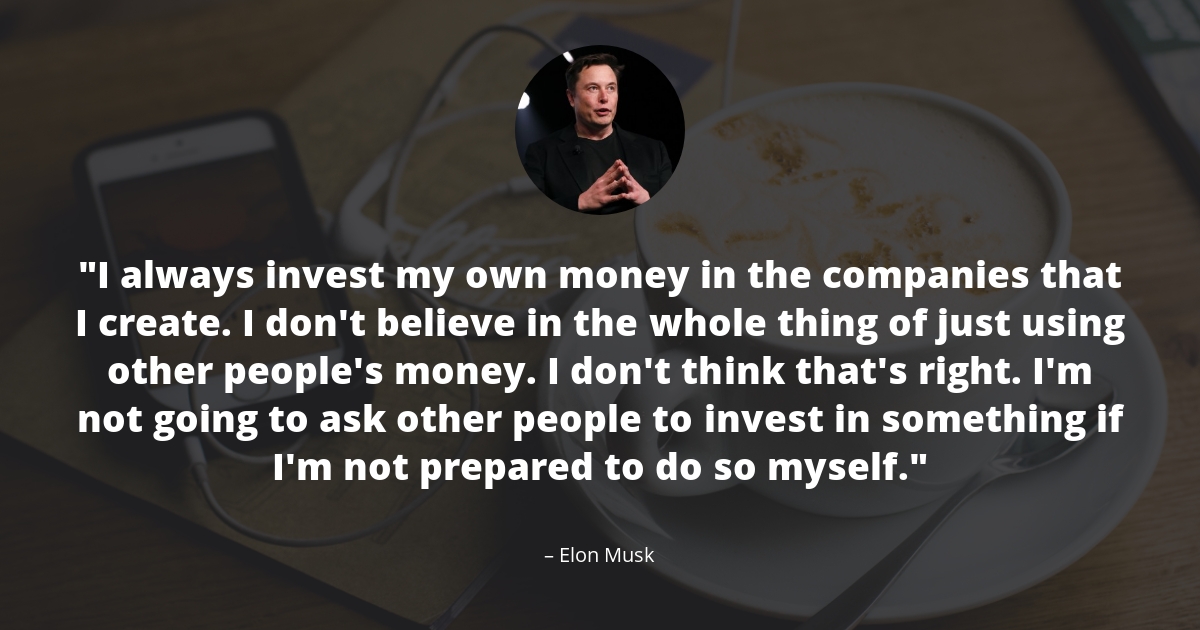 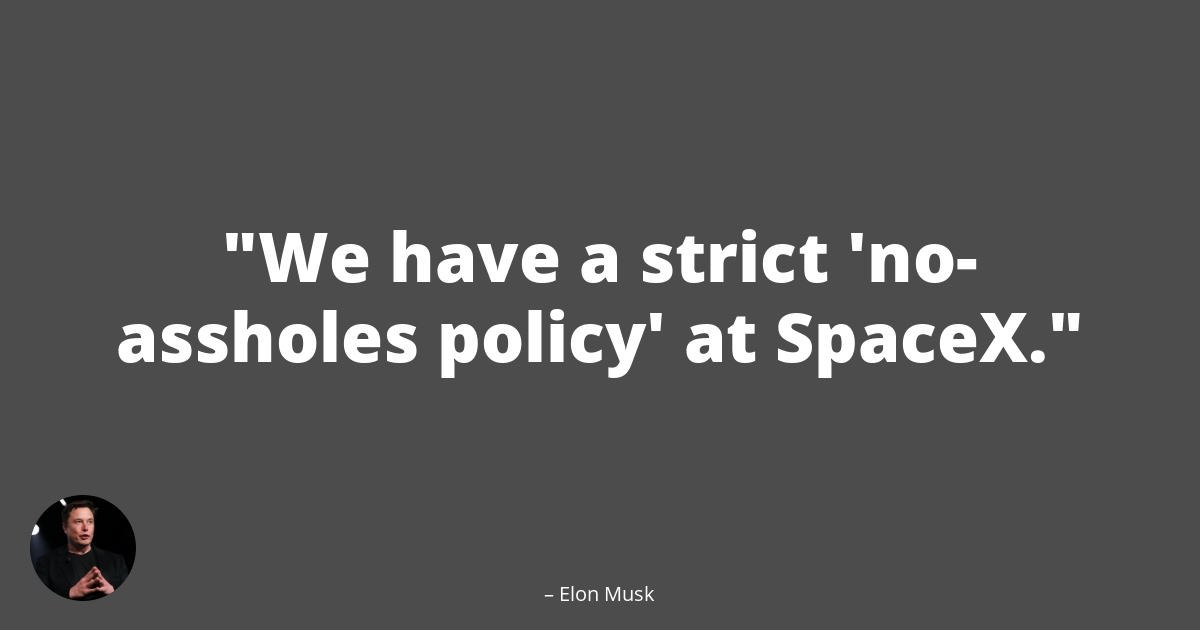 "I don't create companies for the sake of creating companies, but to get things done." 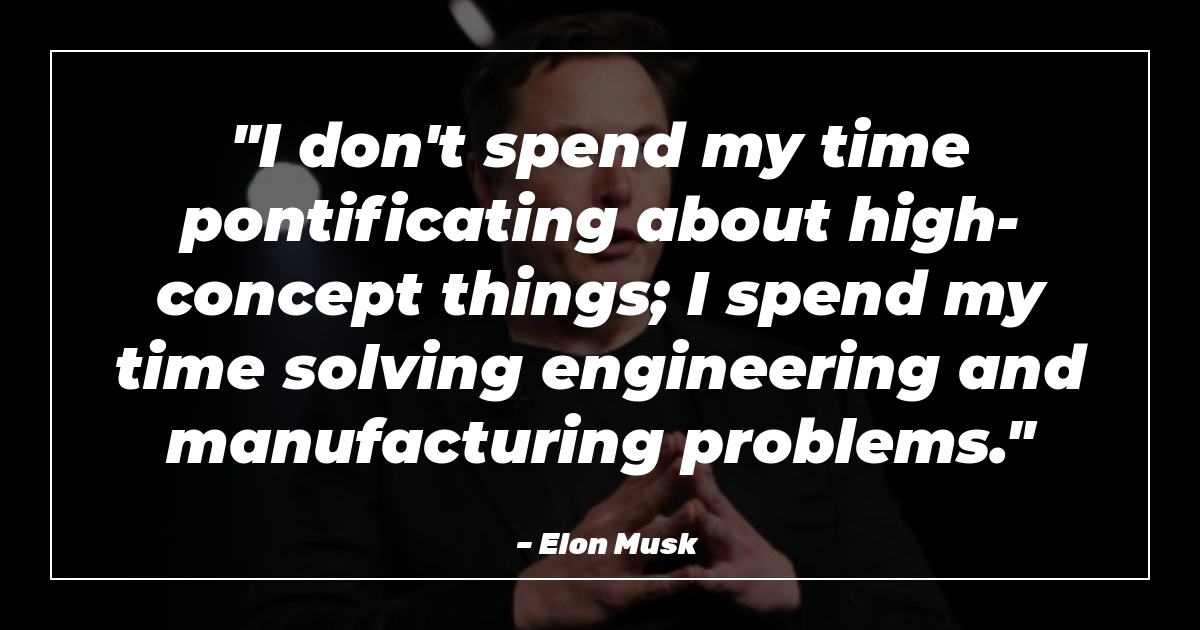 "I wouldn't say I have a lack of fear. In fact, I'd like my fear emotion to be less because it's very distracting and fries my nervous system."

"Failure is an option here. If things are not failing, you are not innovating enough."

"A company is a group organized to create a product or service, and it is only as good as its people and how excited they are about creating. I do want to recognize a ton of super-talented people. I just happen to be the face of the companies."

"Really pay attention to negative feedback and solicit it, particularly from friends. ... Hardly anyone does that, and it's incredibly helpful."

"I always have optimism, but I'm realistic. It was not with the expectation of great success that I started Tesla or SpaceX... It's just that I thought they were important enough to do anyway."

"I've actually not read any books on time management." 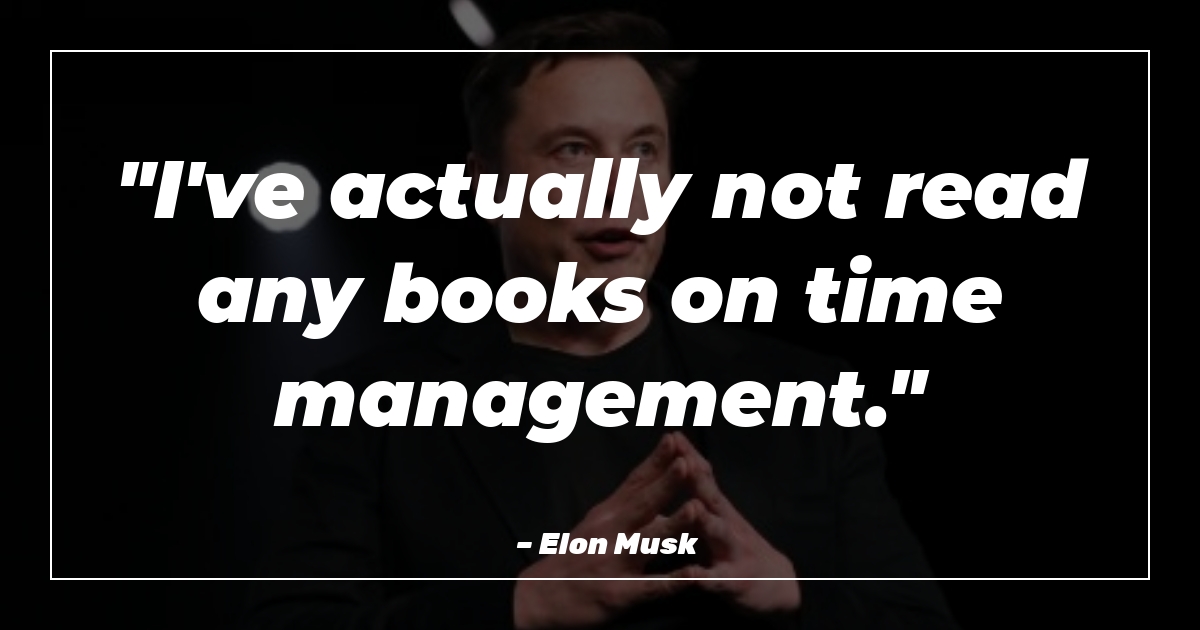 "You have to say, 'Well, why did it succeed where others did not?'"

"Disruptive technology where you really have a big technology discontinuity... tends to come from new companies." 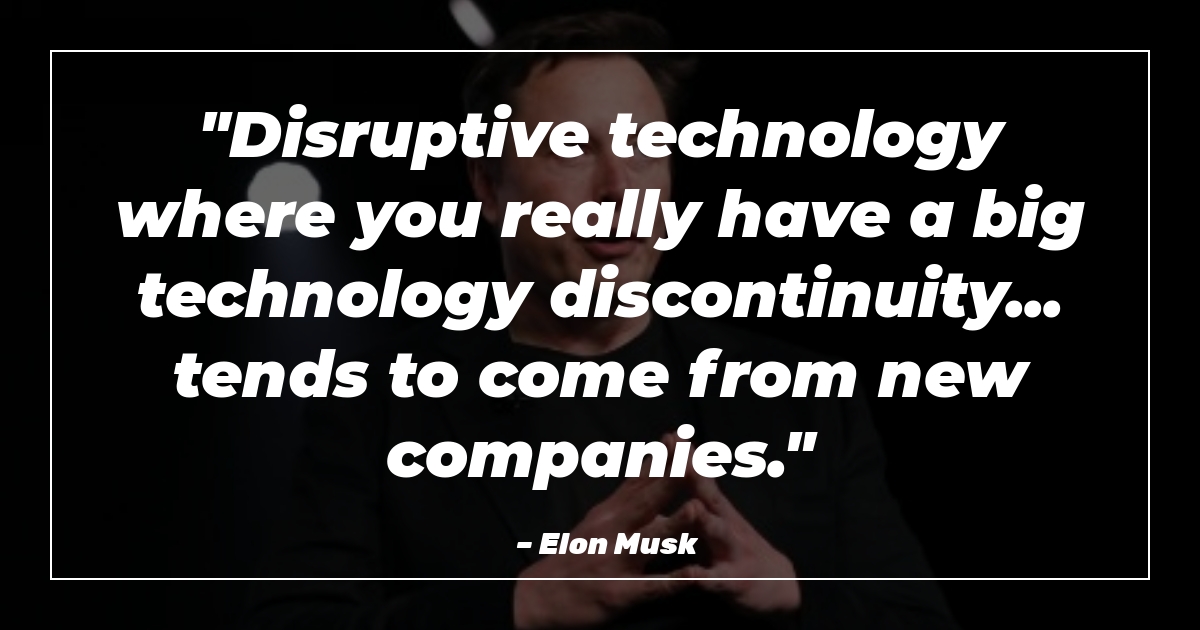 "Being an entrepreneur is like eating glass and staring into the abyss of death." 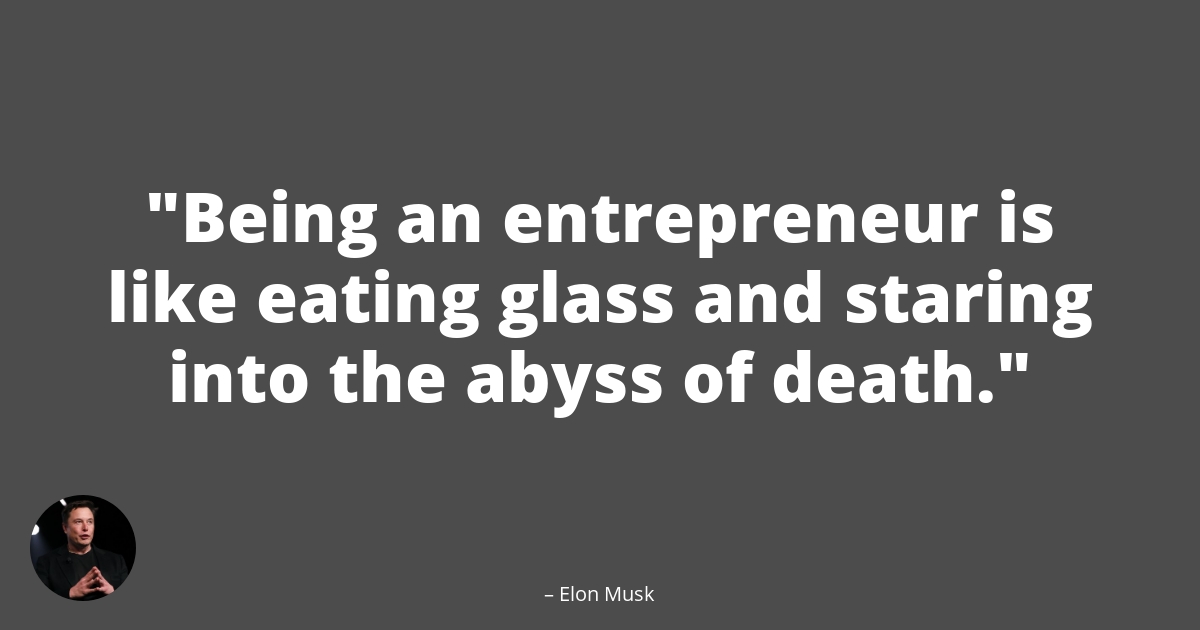 "It's OK to have your eggs in one basket as long as you control what happens to that basket." 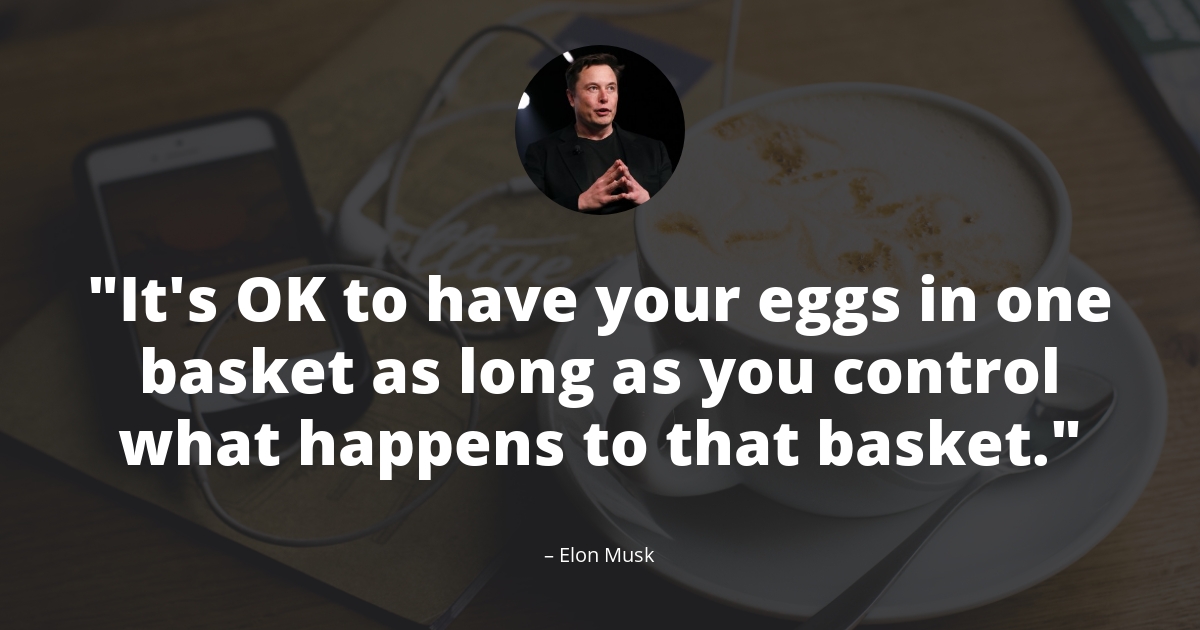 "When something is important enough, you do it even if the odds are not in your favor."

"There are really two things that have to occur in order for a new technology to be affordable to the mass market. One is you need economies of scale. The other is you need to iterate on the design. You need to go through a few versions." 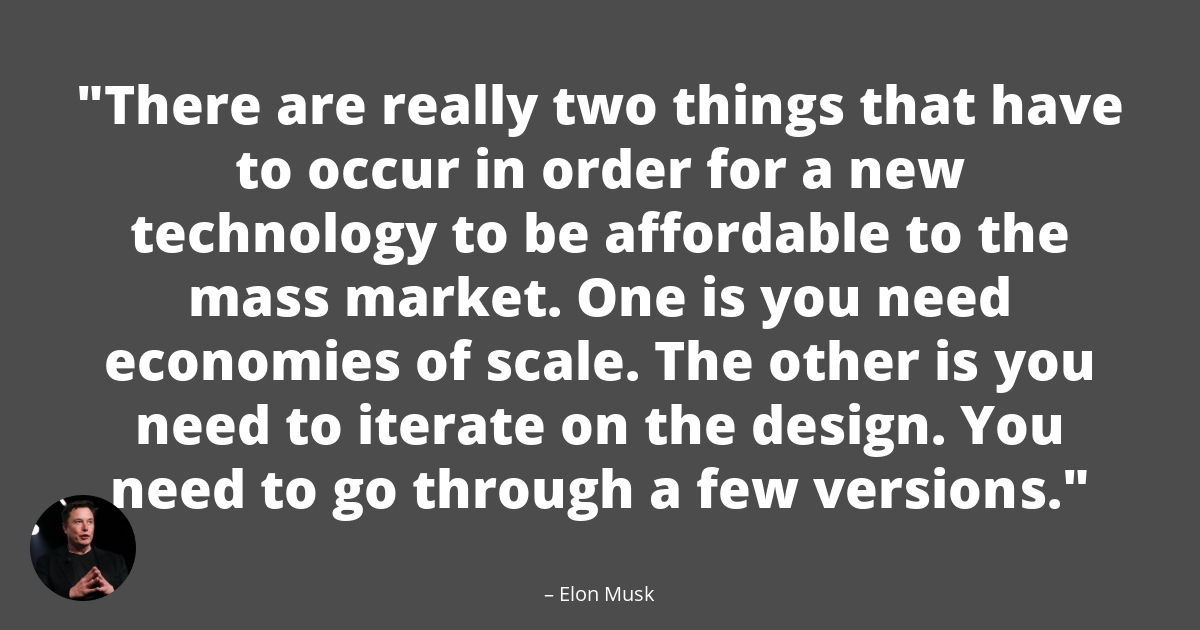 "Talent is extremely important. It's like a sports team, the team that has the best individual player will often win, but then there's a multiplier from how those players work together and the strategy they employ."

"Some people don't like change, but you need to embrace change if the alternative is disaster."

"Persistence is very important. You should not give up unless you are forced to give up." 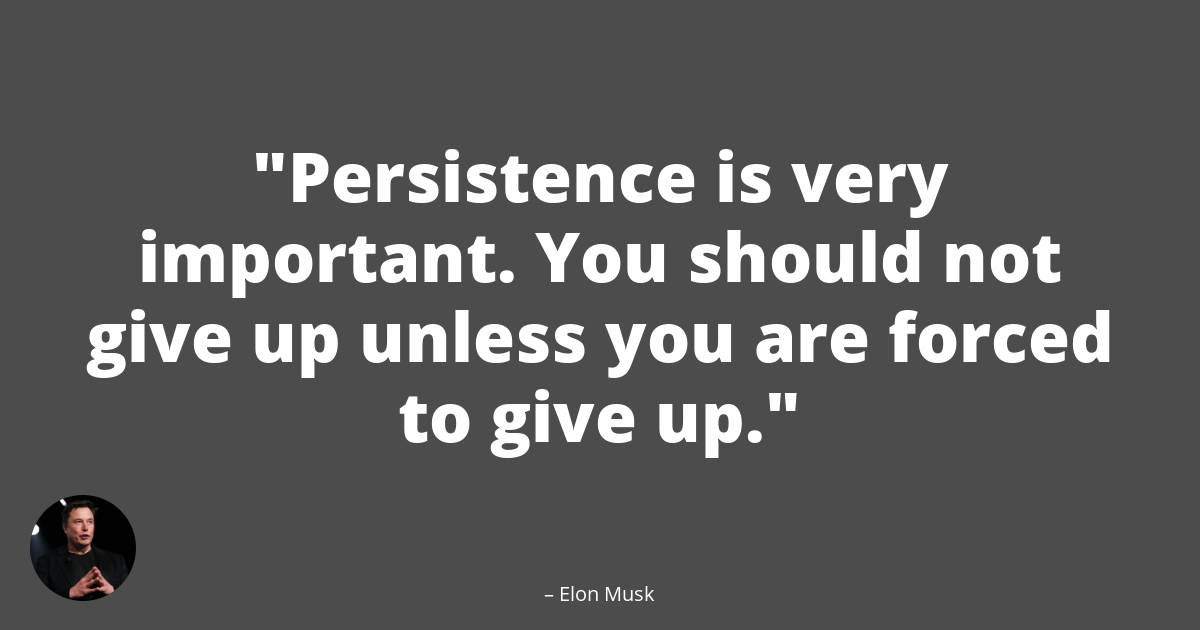 "The first step is to establish that something is possible; then probability will occur." 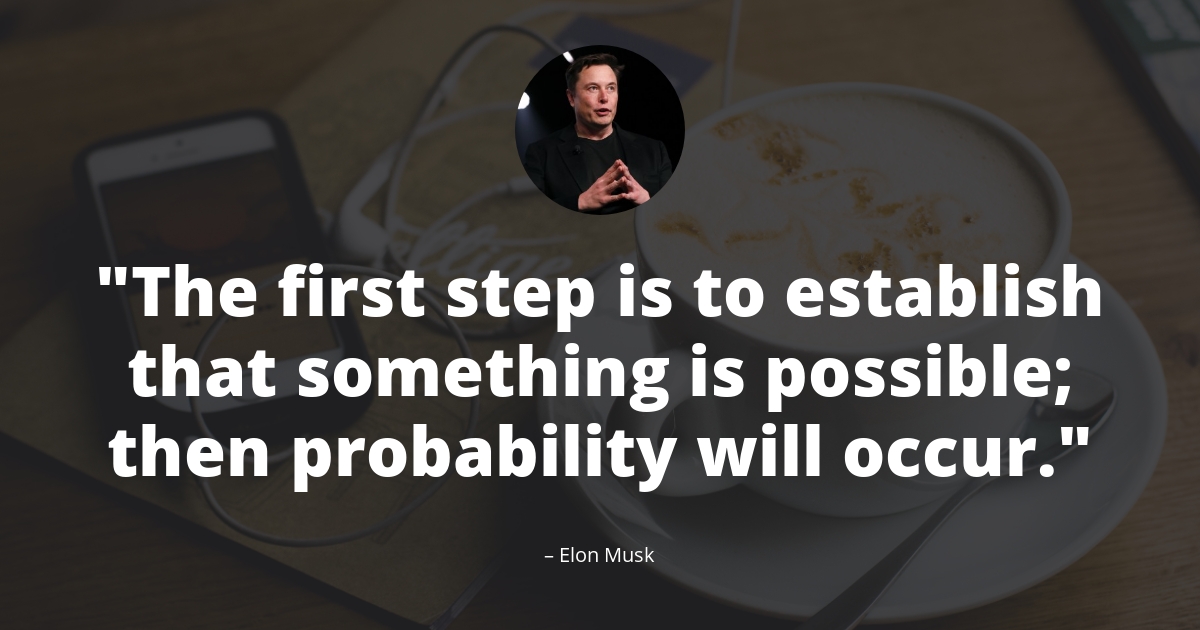 "I think it's very important to have a feedback loop, where you're constantly thinking about what you've done and how you could be doing it better."

"Starting and growing a business is as much about the innovation, drive, and determination of the people behind it as the product they sell."

"People should pursue what they're passionate about. That will make them happier than pretty much anything else." 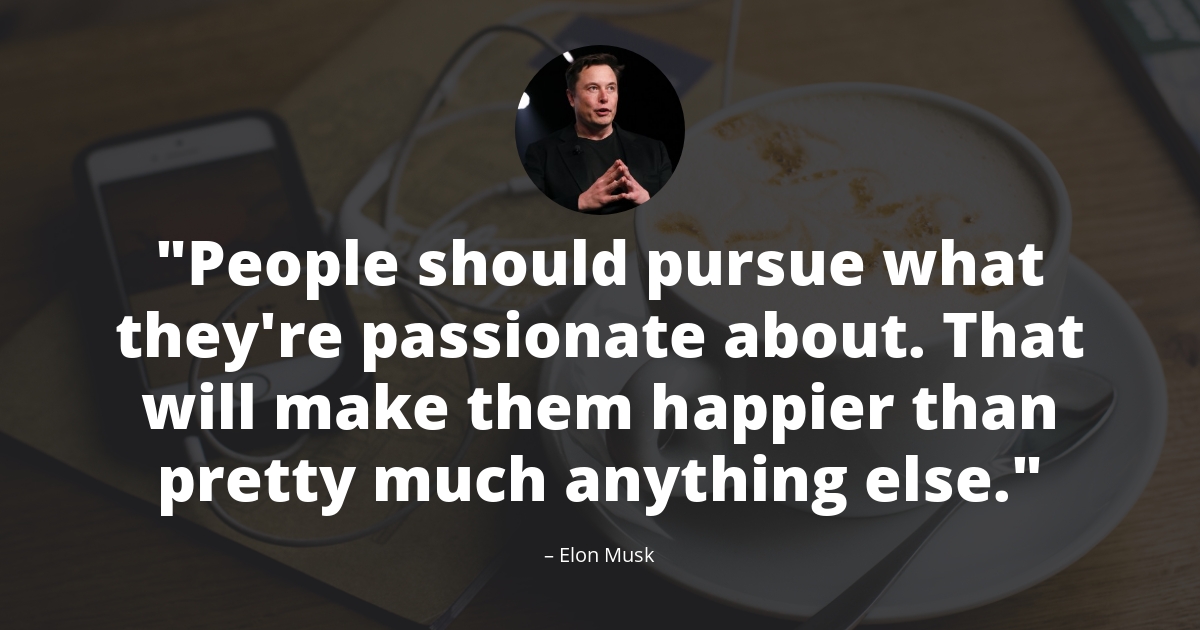 "What makes innovative thinking happen?... I think it's really a mindset. You have to decide." 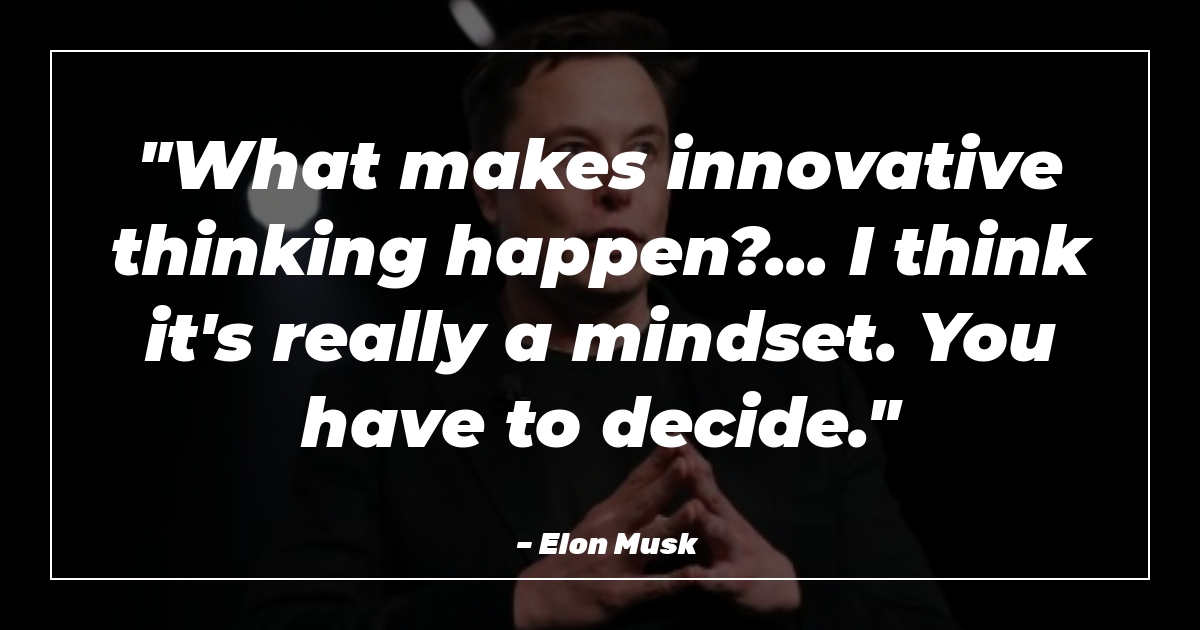 "There's a tremendous bias against taking risks. Everyone is trying to optimize their ass-covering." 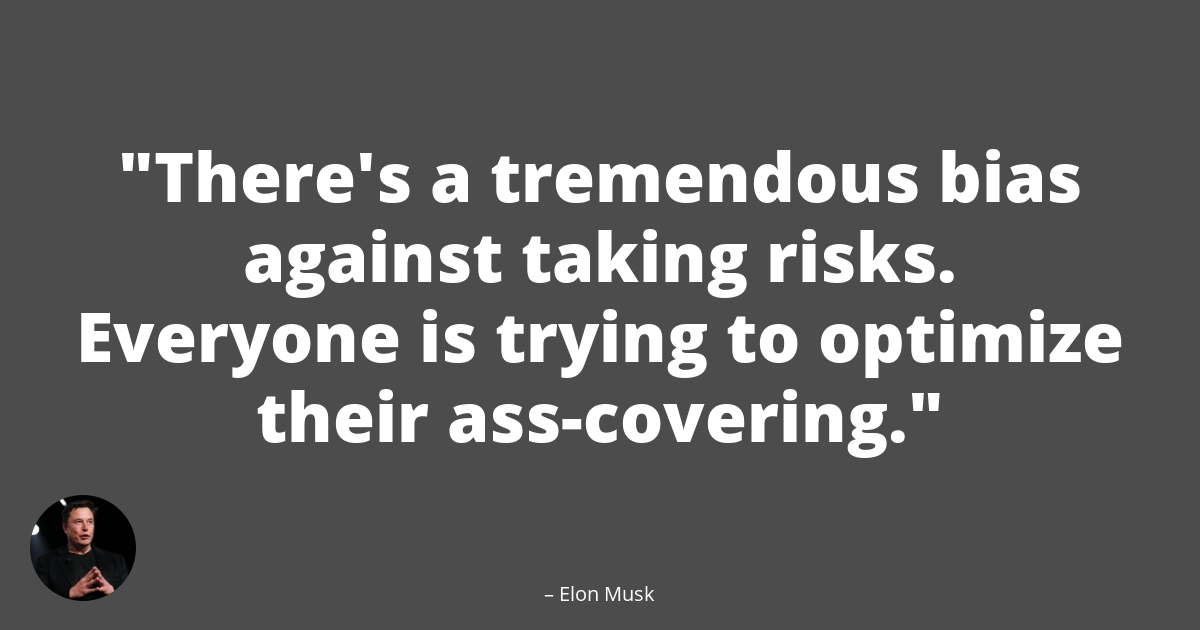 "I think most of the important stuff on the Internet has been built. There will be continued innovation, for sure, but the great problems of the Internet have essentially been solved."

"If you get up in the morning and think the future is going to be better, it is a bright day. Otherwise, it's not."

"Work like hell. I mean you just have to put in 80 to 100 hour weeks every week. [This] improves the odds of success. If other people are putting in 40 hour workweeks and you're putting in 100 hour workweeks, then even if you're doing the same thing, you know that you will achieve in four months what it takes them a year to achieve."

"I think we have a duty to maintain the light of consciousness to make sure it continues into the future." 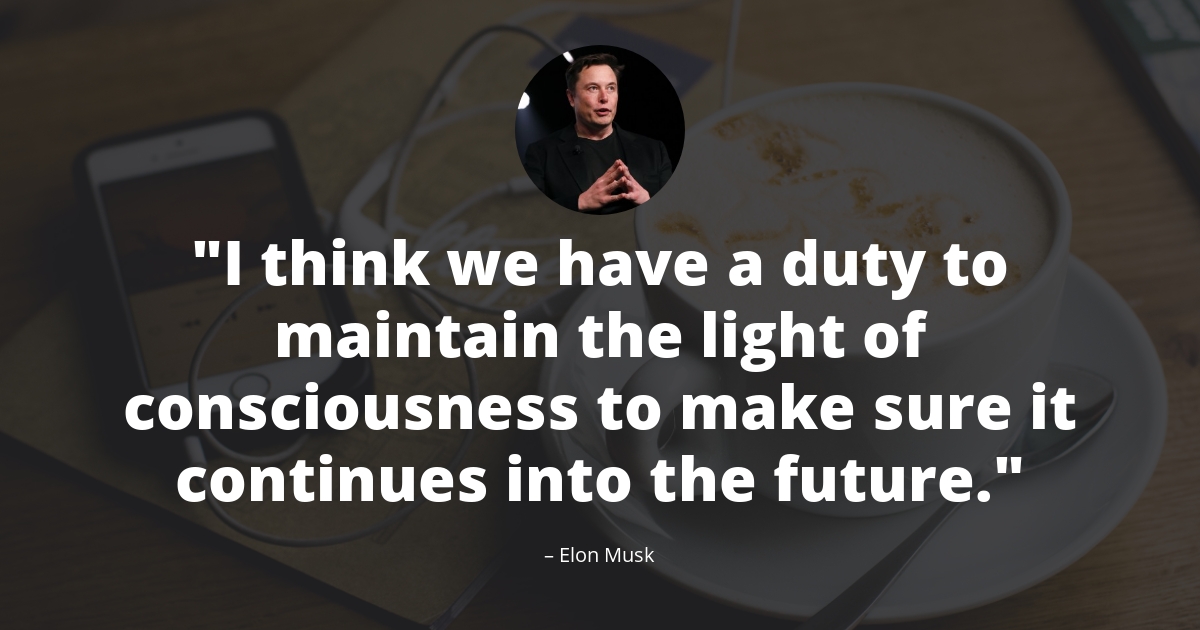 "It's very important to like the people you work with, otherwise life [and] your job is gonna be quite miserable."

"People work better when they know what the goal is and why. It is important that people look forward to coming to work in the morning and enjoy working." 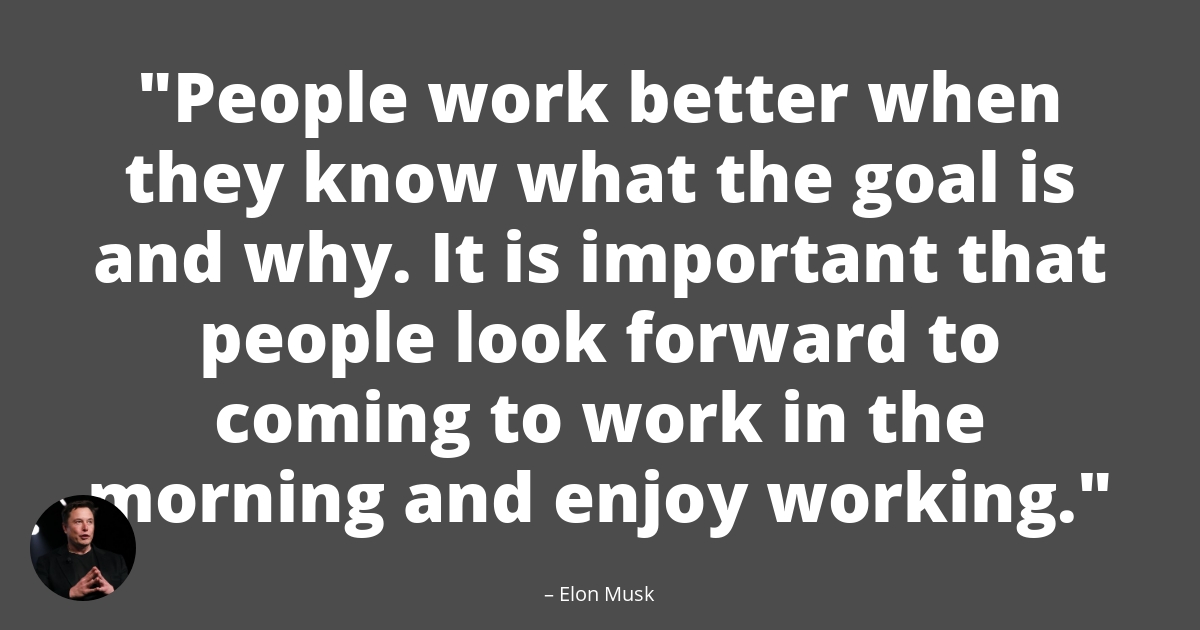 "As much as possible, avoid hiring MBAs. MBA programs don't teach people how to create companies."

"I don't think it's a good idea to plan to sell a company." 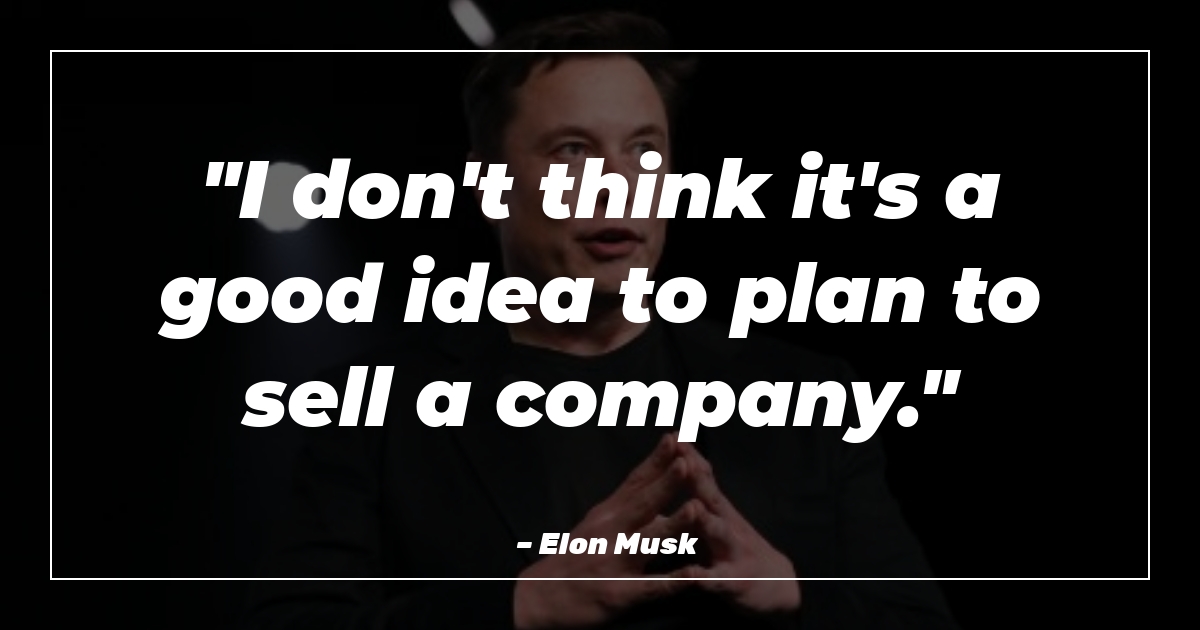 "My biggest mistake is probably weighing too much on someone's talent and not someone's personality. I think it matters whether someone has a good heart." 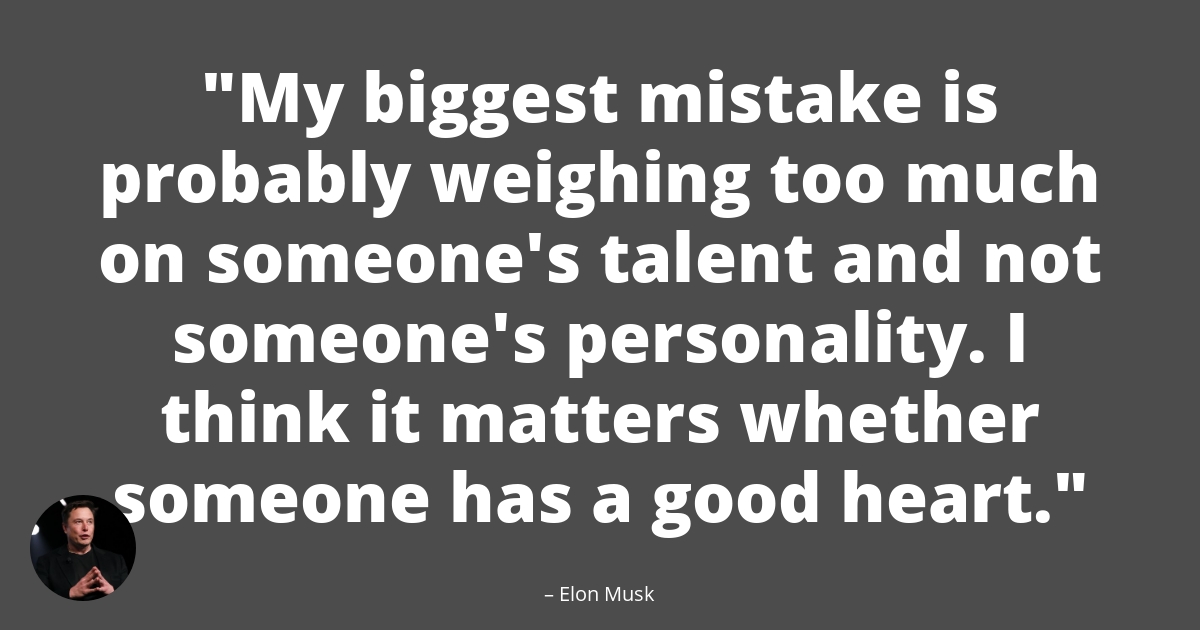 "It is a mistake to hire huge numbers of people to get a complicated job done. Numbers will never compensate for talent in getting the right answer (two people who don't know something are no better than one), will tend to slow down progress, and will make the task incredibly expensive."

"If you're trying to create a company, it's like baking a cake. You have to have all the ingredients in the right proportion."

"If something has to be designed and invented, and you have to figure out how to ensure that the value of the thing you create is greater than the cost of the inputs, then that is probably my core skill."

"I'm interested in things that change the world or that affect the future and wondrous, new technology where you see it, and you're like, 'Wow, how did that even happen? How is that possible?'"

"When Henry Ford made cheap, reliable cars, people said, 'Nah, what's wrong with a horse?' That was a huge bet he made, and it worked."

"I think the best way to attract venture capital is to try and come up with a demonstration of whatever product or service it is and ideally take that as far as you can. Just see if you can sell that to real customers and start generating some momentum. The further along you can get with that, the more likely you are to get funding."

"I would just question things... It would infuriate my parents... That I wouldn't just believe them when they said something 'cause I'd ask them why. And then I'd consider whether that response made sense given everything else I knew." "If you're co-founder or CEO, you have to do all kinds of tasks you might not want to do... If you don't do your chores, the company won't succeed... No task is too menial."

"You shouldn't do things differently just because they're different. They need to be... better." 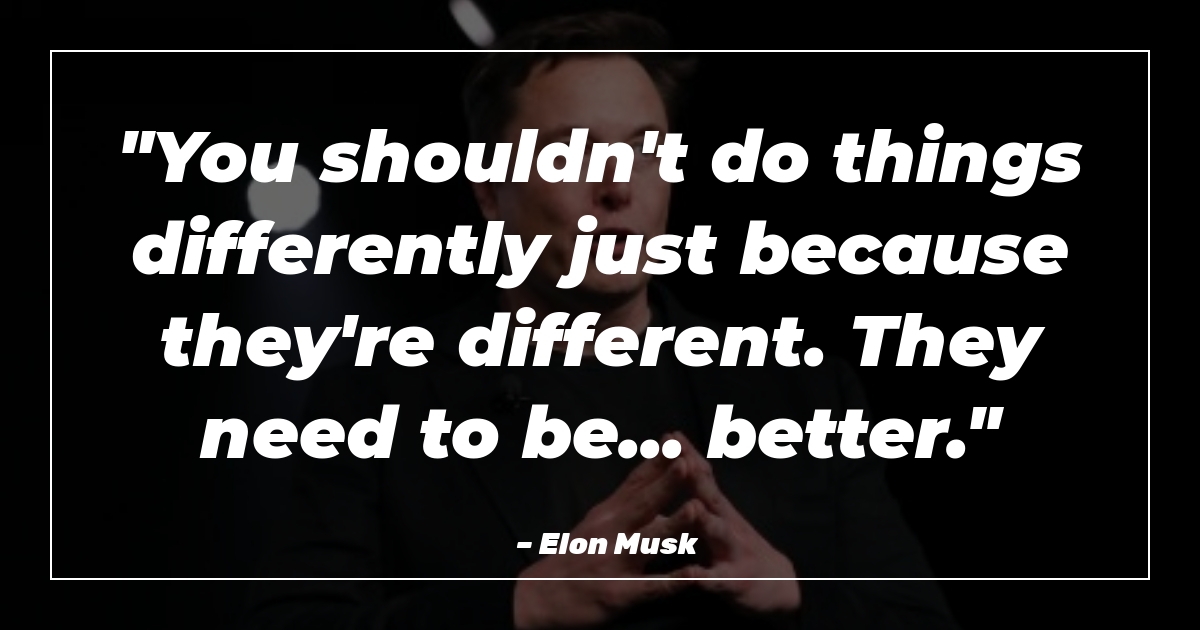 "Don't delude yourself into thinking something's working when it's not, or you're gonna get fixated on a bad solution."

You might also like:
52 Business Ideas You Can Start With Little Cap...
Samantha Walls
How To Come Up With An Idea For Your Business
Starter Story
20 Inspiring Small Business Ideas Earning At Le...
Starter Story
Become a premium member to get full access.
Ready to bring your idea to life?
Join Starter Story to get the greatest companion to starting and growing your business.

How a food blog grew a niche audience to over 35,000 active subscribers
$50K+ in savings
Access to hundreds of the best tools to run your business. Including: $5,000 in AWS credits, $1000 Airtable credit, $1,000 in Notion credits, $1,000 in Miro credits, $10K in transactions without Stripe fees, 12 months free on SendGrid, 6 months free on Zendesk, Typeform, 50% off Quickbooks, Hotjar, Algolia, and hundreds of other tools.
2K+
case studies
74.5K
subscribed
400+
hours of content
4M
visitors

"Thank you for creating this. It's refreshing to see how real founders grow their business."
Enter your email to get started.
To read this exclusive story, join Starter Story Premium!
Premium
Full access to case studies, filters, and business ideas database
$6.20 $2.67/week
Billed annually
Unlimited access
Unlock 3,500+ case studies
Find your next idea - 3,969 business ideas
Unlock 200+ growth playbooks
Filter, search, export full database
Premium Plus
All access pass: All courses & guides to start your business
$12.82 $5.75/week
Billed annually
Everything in Premium
$50K+ in deals on tools
Access to hundreds of successful founders
1 on 1 mentorship for your business
Get the Lean SEO course
Questions? Check out our FAQ