Balaji Srinivasan is an angel investor and entrepreneur. Formerly the CTO of Coinbase and General Partner at Andreessen Horowitz, he was also the co-founder of Earn.com. Srinivasan also co-founded Teleport, a web browser for digital nomads, which was later acquired by Topia.

We've put together an incredible collection of Balaji Srinivasan quotes to read. 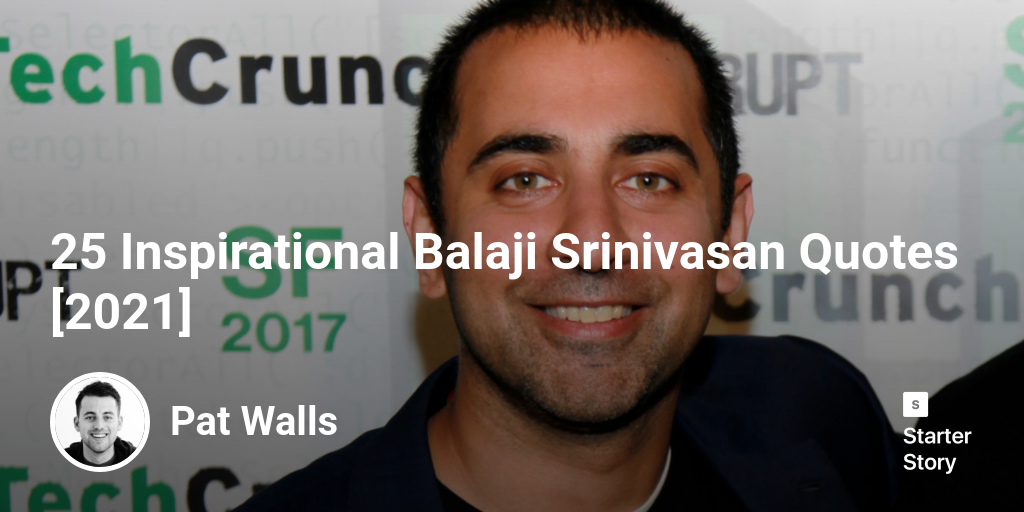 "Bitcoin is a way to have programmable scarcity. The blockchain is the data structure that records the transfer of scarce objects."

"Tokenization applies to scarce assets. Today, the most appropriate thing to tokenize is something that's purely digital. Bitcoin and ethereum are the canonical."

"I learned that despite having years and years of experience in math and computer science and so on, I didn't really know how to code until I formed a company."

"The future of technology is not really location-based apps; it is about making location completely unimportant."

"We believe the most significant long-term application of bitcoin may be reducing the upfront cost of internet-connected devices to make them more accessible for the developing world."

"Anything scarce will ultimately be tokenized because the benefits of digitization and increased liquidity are so great."

"There's a tiny number of Bitcoin wizards and an enormous number of smart developers that have no onramp to Bitcoin. We need to make that onramp easier."

"Conceptually, we believe that embedded mining will ultimately establish bitcoin as a fundamental system resource on par with CPU, bandwidth, hard drive space, and RAM."

"Mobile technology makes us ever more mobile, increasingly permitting not just easier movement around a home base but permanent international relocation."

"Don't do a startup unless you're ideologically driven to make it succeed beyond the economic motivation."

"It used to be that you had to come to Silicon Valley, walk up Sand Hill Road, network with individuals. That's now being completely changed and turned on its head by the whole ICO thing."

"I'm interested in businesses that take digital bits and turn them into interfaces for physical atoms. I'm also interested in drones, Bitcoin, and 3D printing."

"I think tokenization eventually means everyone becomes an investor once all the regulatory issues are worked out - from your computer itself to a kid in India messing around with $10."

"By, say, 2025-2030, I expect that there will be multiple jurisdictions that allow the tokenization of virtually any scarce resource, all the way down to personal tokens."

"Many great founders have one or more big failures on their track record. What makes them great is that they eventually succeed despite that."

"Our nation of immigrants is, tautologically, a nation of emigrants."

"Virtually every major technology has an initial spike of interest, then a dip, and then a long-term rise to success. The dot-com bubble is the canonical example, but there are many more."

"Isn't the purpose of bitcoin mining simply to get rich - or not, as the case may be? Well, at 21, we are less concerned with bitcoin as a financial instrument and more interested in bitcoin as a protocol - and particularly in the industrial uses of bitcoin enabled by embedded mining."

"There are downsides to implicitly trusting banks, as the 2008 financial crisis showed."

"Machine translation of signs, text, and speech brings down language barriers and facilitates ever more cross-cultural meetings of like minds."

"We need to build opt-in society, outside the U.S., run by technology."

"We think of bitcoin as mobile. It's not one company; it's broad."

"Every time you load a webpage is a HTTP request. That's a lot of HTTP requests. If you are earning bitcoin on every HTTP request, that could be a lot of earned bitcoins."

How a food blog grew a niche audience to over 35,000 active subscribers
$50K+ in savings
Access to hundreds of the best tools to run your business. Including: $5,000 in AWS credits, $1000 Airtable credit, $1,000 in Notion credits, $1,000 in Miro credits, $10K in transactions without Stripe fees, 12 months free on SendGrid, 6 months free on Zendesk, Typeform, 50% off Quickbooks, Hotjar, Algolia, and hundreds of other tools.
2K+
case studies
148K
subscribed
1K+
hours of content
8M
visitors

"Thank you for creating this. It's refreshing to see how real founders grow their business."
Enter your email to get started.
To read this exclusive story, join Starter Story Premium!
Premium
Full access to case studies, filters, and business ideas database
$6.20 $2.67/week
Billed annually
Unlimited access
Unlock 2,344+ case studies
Find your next idea - 6,466 business ideas
Unlock 200+ growth playbooks
Filter, search, export full database
Premium Plus
All access pass: All courses & guides to start your business
$12.82 $5.75/week
Billed annually
Everything in Premium
$50K+ in deals on tools
Access to hundreds of successful founders
1 on 1 mentorship for your business
Get the Lean SEO course
Questions? Check out our FAQ. Already a member? Sign in