Ohanian is the Co-Founder and Executive Chairman of Reddit, The American social media site.

We've put together an incredible collection of Alexis Ohanian quotes to read. 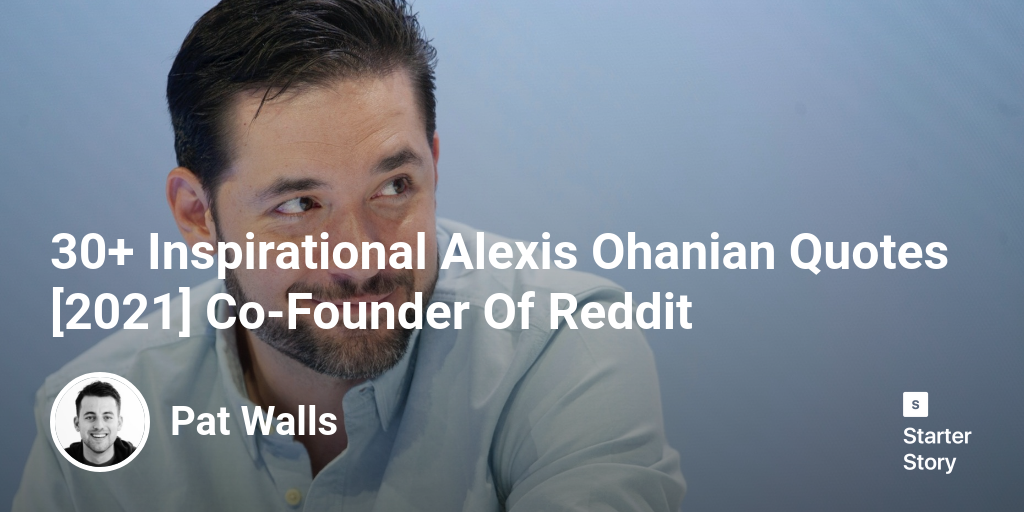 “If you want to succeed, you’ve got to be okay to just lose control.”

“The social-media landscape changes incredibly fast, so you have to be open-minded and nimble to keep up with it.”

“Even if you have no interest in starting a company, having the experience of having ideas and doing them, that’s muscle to exercise because that’s what people are going to want to see. That’s what makes you different.”

“What one realizes there is that we are not in control of the [Reddit] community, in any way, shape, or form. We have no power over it and so we’ve lost this total control.”

“Let’s say you’re all worried about student loan debt and you need to have steady income. That doesn’t have to be your everything.”

“The problem is these politicians have very, very big interests in being re-elected, and the money that gets them there is provided by people who don’t necessarily have the interest of the public in mind.”

“Reality, Stuff, Made save quote report ”

“Nothing will replace good journalism.”

“I want to be in an industry where the upstarts can grow and displace the incumbents because that’s why there’s so much innovation.”

“Obviously solving the education problem is big and complex, and there’s already so many failings, but coding is the new fluency. This is the most valuable skill of this century. ”

“I can’t begrudge anyone who opts to get a job instead of creating one for themselves.”

“No, everyone has great ideas, but what makes a difference, especially online, or just in life, is actually doing it; getting that first version out there.”

“It turns out the Internet is this amazing resource for everyone who has access to it.”

“I think everyone should learn how to code.”

“Everything is derivative. Everything is a remix, and we all stand on the shoulders of giants – a great phrase.”

“I actually haven’t even found a curriculum in America that is really preparing people for this 21st-century world.”

“Having ideas and doing them – that’s what entrepreneurship comes down to. That’s something that makes you not just a great founder who I want to invest in, but also a great employee or someone I want to work with.”

“Not everyone is going to end up being a founder of a company, but the skill of being entrepreneurial, having ideas, and going through with them – that skill is so important.”

“Being effective at social media, whether for business or personal use, means capturing people who have short attention spans.”

“It takes discipline not to let social media steal your time.”

“Net neutrality is one where we the people are definitely on the ropes.”

“We don’t even realize something is broken until someone else shows us a better way.”

“Can we imagine the United States without electricity? No, that would be pretty hard. Likewise, we can’t really imagine being without an open Internet. The cost would be so grave, so serious.”

“There is a much bigger issue with student loan rates, the cost of tuition; those are some huge problems that need to be resolved.”

“The great thing about the Internet is, it’s the freest marketplace of ideas that there is.”

“The people who are going to be succeeding are not going to be waiting around for anyone’s permission.”

“If I didn’t believe in rooting for founders and investing in founders, I’d be a bit of a hypocrite.”

“The weird thing about Reddit is that for a community its size – now I’m no longer at Reddit, but the public traffic numbers that they put out are, I think with the site about eight million unique visitors a month, or every 30 days, which is a fairly big site.”

“You can throw – and we’ve seen plenty of these kinds of companies – millions of dollars in advertising for a website or a service, and in the end if it’s not useful no one’s going to use it.”

This is not an online course. It's a database of 2,468 successful businesses, and growing.

Discover how 2,468 founders built their business to success

How a food blog grew a niche audience to over 35,000 active subscribers
$50K+ in savings
Access to hundreds of the best tools to run your business. Including: $5,000 in AWS credits, $1000 Airtable credit, $1,000 in Notion credits, $1,000 in Miro credits, $10K in transactions without Stripe fees, 12 months free on SendGrid, 6 months free on Zendesk, Typeform, 50% off Quickbooks, Hotjar, Algolia, and hundreds of other tools.
2K+
case studies
162K
subscribed
1K+
hours of content
8M
visitors

"Thank you for creating this. It's refreshing to see how real founders grow their business."
Enter your email to get started.
Free Get a list of top 100 YouTube channel names
To read this exclusive story, join Starter Story Premium!
Premium
Full access to case studies, filters, and business ideas database
$6.20 $2.67/week
Billed annually
Unlimited access
Unlock 2,468+ case studies
Find your next idea - 6,694 business ideas
Unlock 200+ growth playbooks
Filter, search, export full database
Premium Plus
All access pass: All courses & guides to start your business
$12.82 $5.75/week
Billed annually
Everything in Premium
$50K+ in deals on tools
Access to hundreds of successful founders
1 on 1 mentorship for your business
Get the Lean SEO course
Questions? Check out our FAQ. Already a member? Sign in